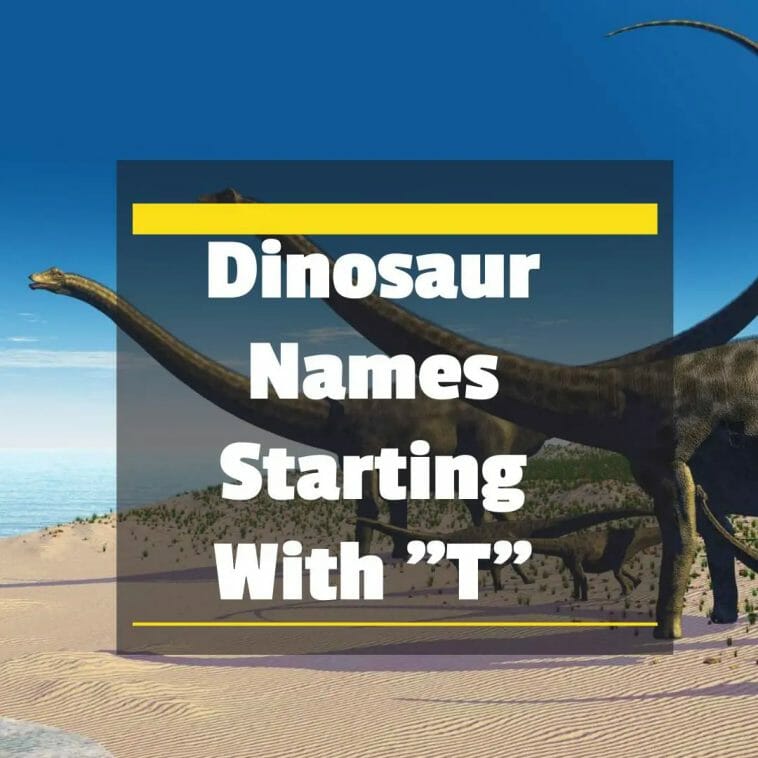 Check out the alphabetical list of dinosaur names beginning with the letter “T”. We’ll look at dinosaur pictures and discuss what their names mean, as well as learn more about dinosaur facts.

Dinosaurs with names that begin with the letter “T”

Contents for Dinosaur Names that Start with “T” 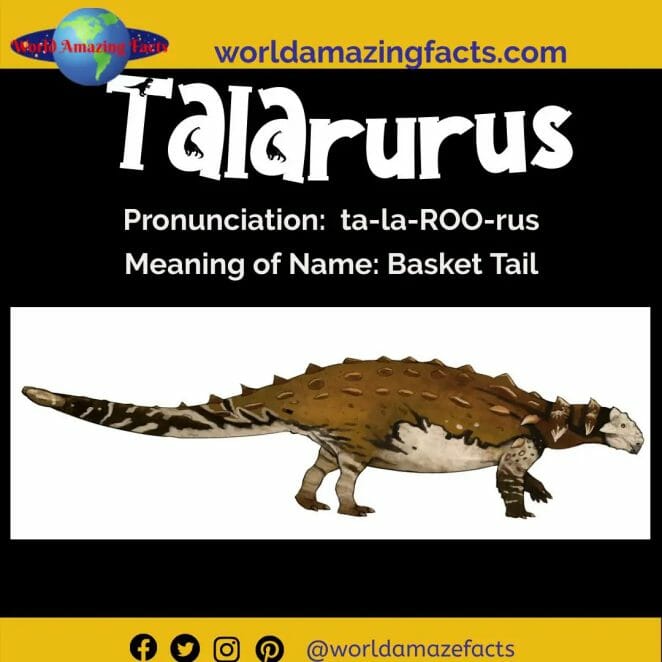 Talarurus is a medium-sized ankylosaurid that lives in Mongolia today. A Soviet expedition discovered it in the Mongolian Gobi Desert in 1950.

The genus name Talarurus means “braided tail” and relates to the ankylosaurid’s tail shape. It is sometimes perverted, like in Paul (2010), who accidentally writes about Talarus. The species name plicatospineus most likely alludes to an animal’s spines. 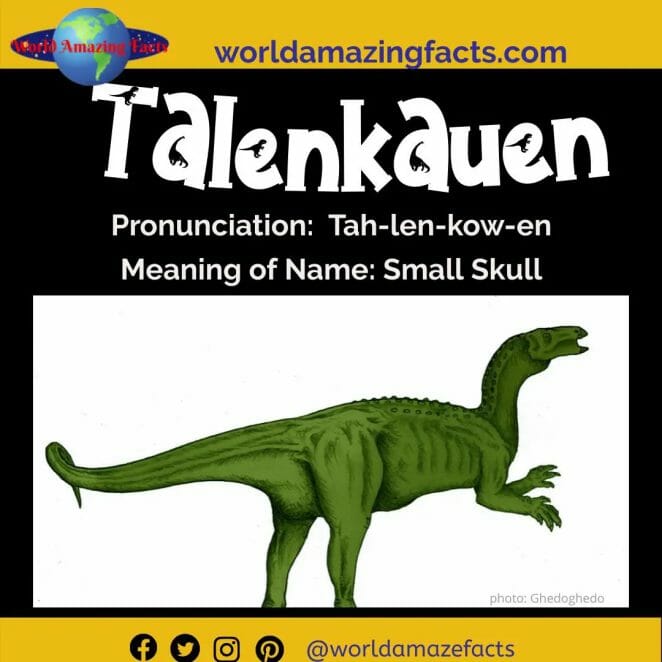 Talenkauen is a tiny, basal representative of iguanodons that lived in Argentina during the Late Cretaceous period.

Talenkauen is an Aonikenk Indian name that meaning “small head”: talenk means “small” and kauen means “head.” It references to the dinosaur’s very tiny skull. The species name santacruzensis is derived from the name of Argentina’s Santa Cruz province. 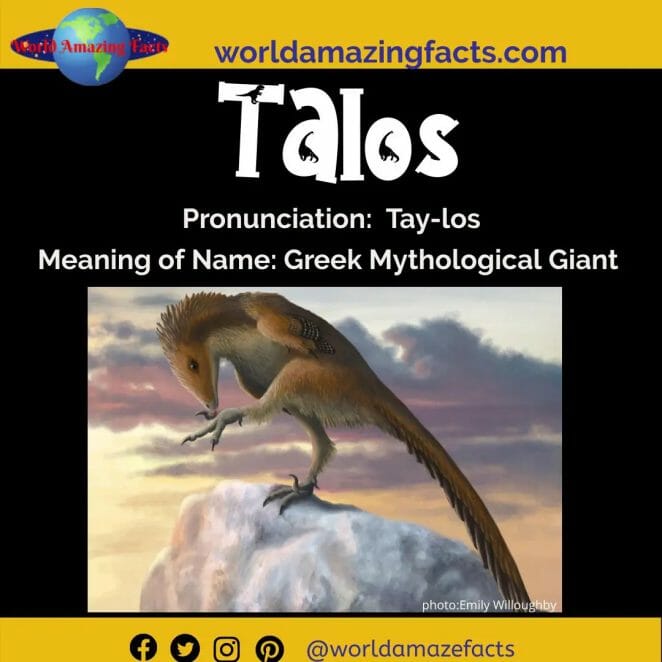 Talos is an extinct genus of carnivorous bird-like theropod dinosaurs that lived in what is now Utah during the late Cretaceous period.

The generic name is derived from the name of the Greek mythological giant – Talos. Scott D. Sampson, the founder of the Kaiparowits Basin Project, is honoured by the genre epithet sampsoni. 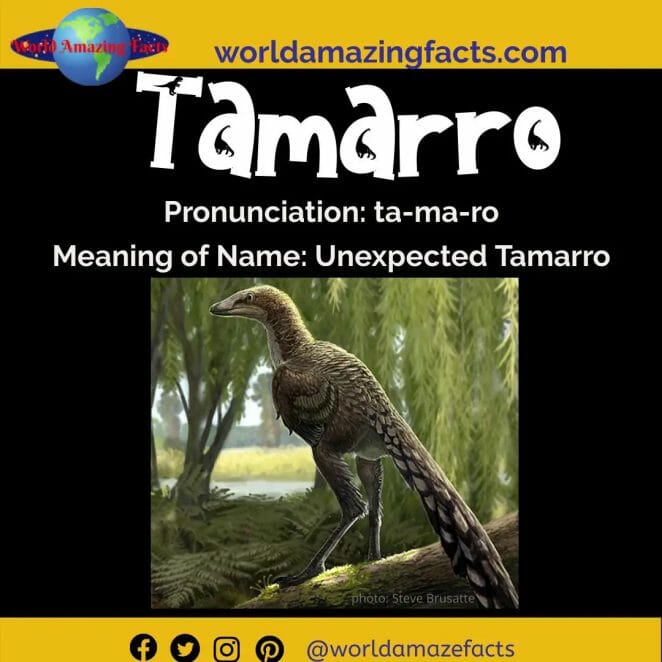 Tamarro is a small theropod of the Troodontidae family that lived at the end of the Cretaceous period in what is now Spain.

Tamarro is a Catalan word that means a little, elusive creature from local folklore. The genre epithet means “unexpected” in Latin and alludes to the unexpected discovery of the dinosaur’s remains. 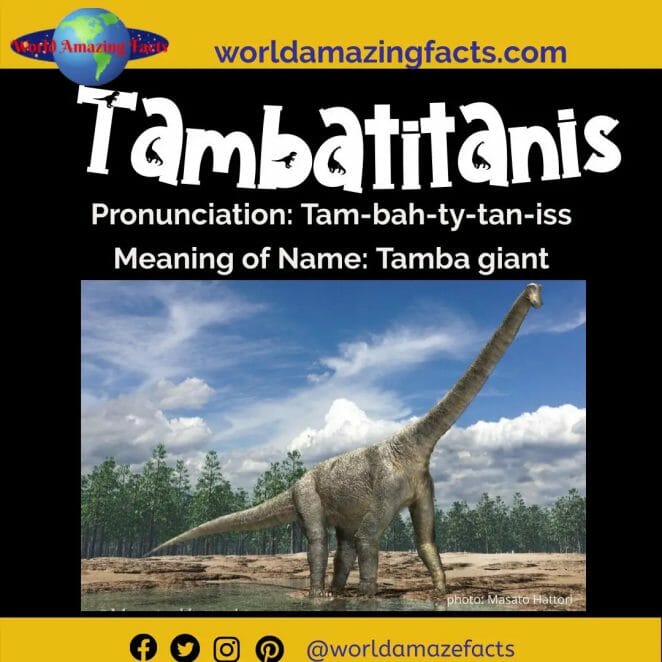 Tambatitanis was a tiny sauropod that existed in what is now Japan during the early Cretaceous period.

The name Tambatitanis is derived from the Japanese city of Tamba in Hyogo Prefecture on the island of Honshu, as well as the Greek titans, in allusion to the size of this dinosaur. The genre name is derived from the Latin word amicitiae, which means “friendship,” in honour of the friendship between the discoverers of the remains, Murakami Shigeru and Adachi Kiyoshi. 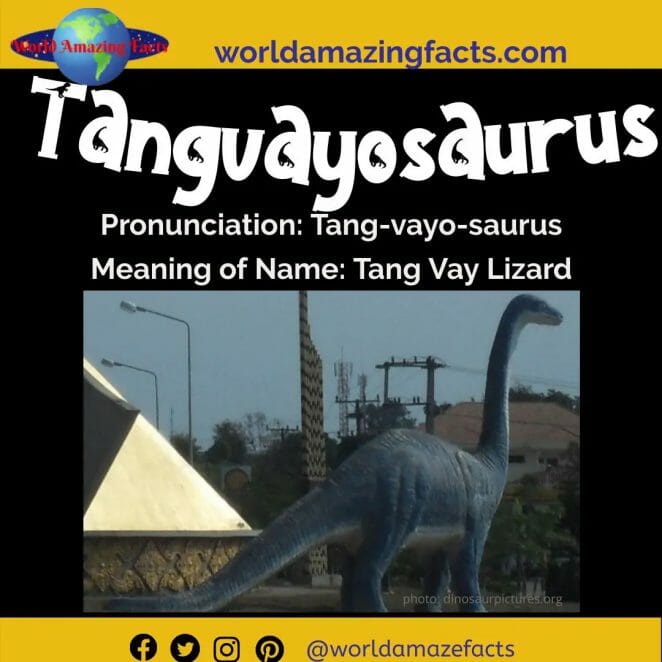 Tangvayosaurus was an Early Cretaceous sauropod that lived in Southeast Asia.

Tangvayosaurus is derived from the site where the remains were discovered and means “Tang Vay lizard.” Josué-Heilmann Hoffet, who discovered the first Australasian dinosaurs, was honoured with the species name. 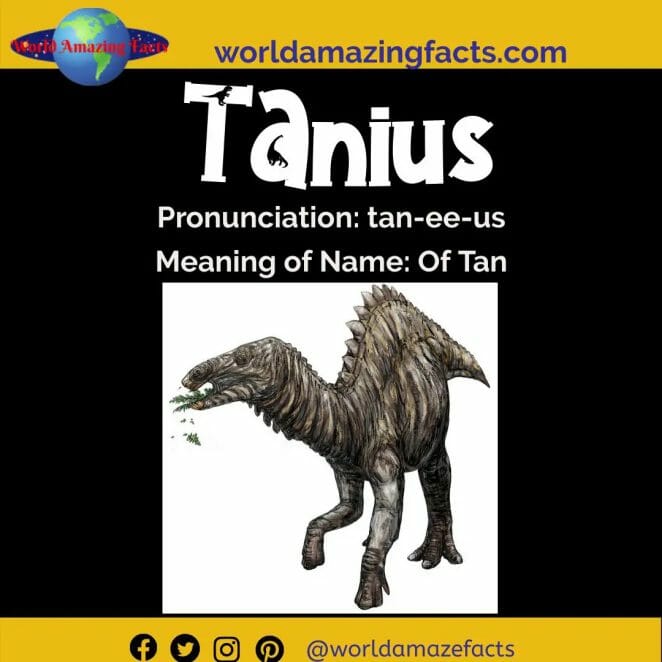 Tanius is a poorly known hadrosaurus from what is now China. Tanius fossil remains have been discovered in the eastern Chinese provinces of Heilongjiang and Shantung. 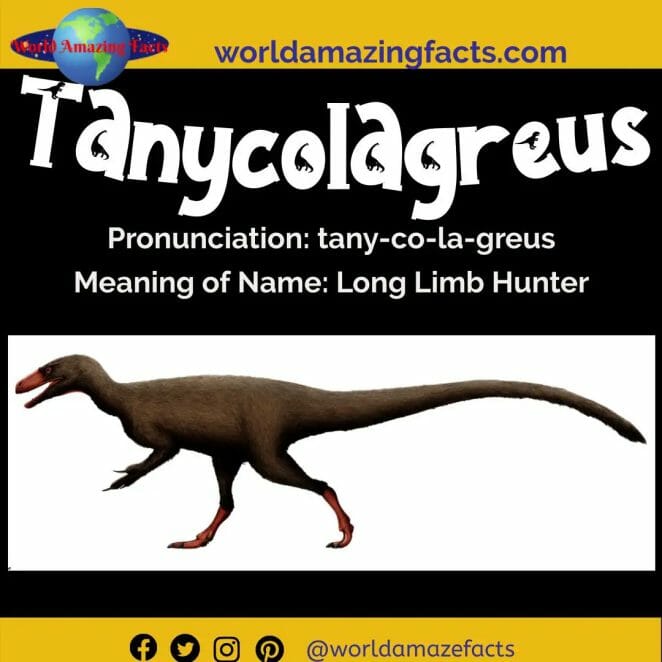 Tanycolagreus is a small or medium-sized theropod with a difficult to determine systematic position. Tanycolagreus fossils were discovered in the famed Morrison Formation of the western United States. Although several tanycolagresis bones were discovered around the beginning of the twentieth century, the species was not officially identified until 2005.

Tanycolagreus is derived from the Greek words tany (“length,” “stretched”), colon (“limb”), and agreus (“hunter”). George “Top” Willson, a retired member of the United States Marine Corps, is honoured with the genre moniker. 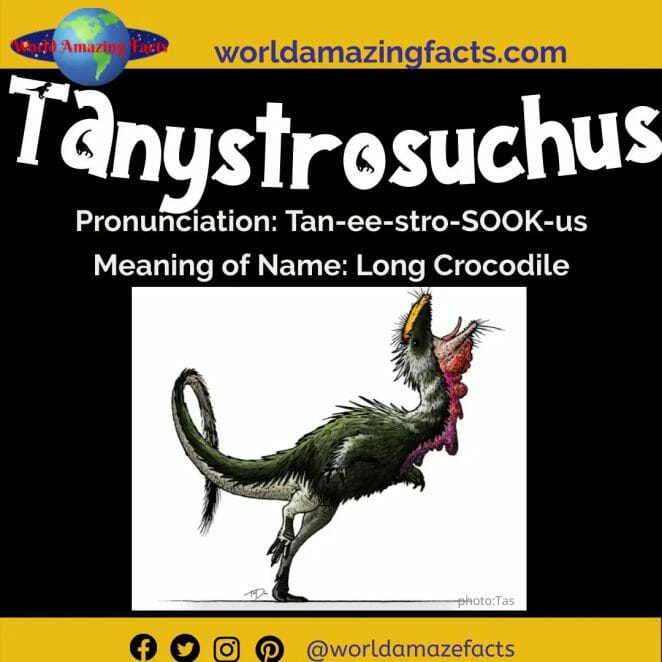 Tanystrosuchus is a theropod genus from Germany’s Late Triassic era. It is a nomen dubium, according to Rauhut and Hungerbuhler (2000), however Mortimer (online, thus informally) suggested that it may be an important taxon because it possesses a combination of traits unique to the Triassic taxon. 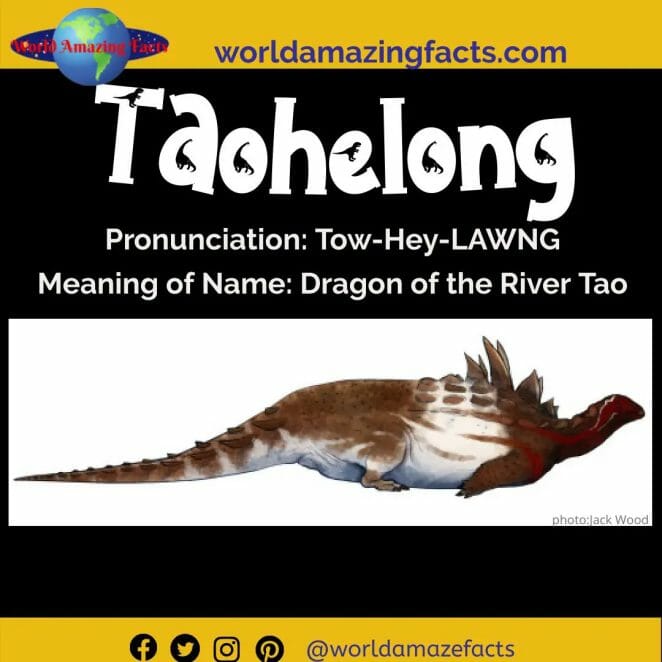 Taohelong is a herbivorous dinosaur from the Ankylosauria group that lived in China during the early Cretaceous period.

Taohelong is a combination of the Tao River and the Chinese words he (“river”) and long (“dragon”). It refers to the carapace of the dinosaur’s tail. The genre epithet alludes to the city of Jincheng. 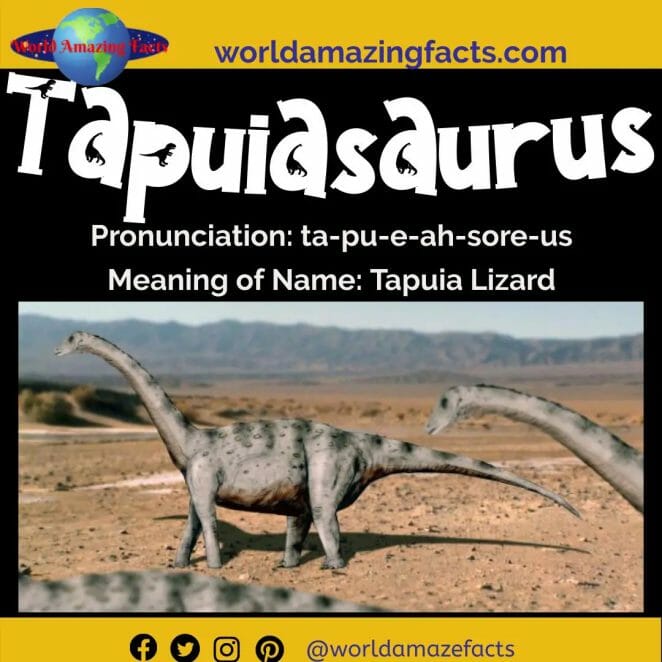 Tapuiasaurus is a sauropod genus from the titanosauria group that lived in what is now South America during the early Cretaceous period.

Tapuiasaurus gets its name from the word Tapuia, which means indigenous tribes in central Brazil in Jê languages, and the Greek word sauros (“lizard”). The usual species name, Macedo, honours Ubirajara Alvesa Macedo, who discovered deposits near Coraçao de Jesus. 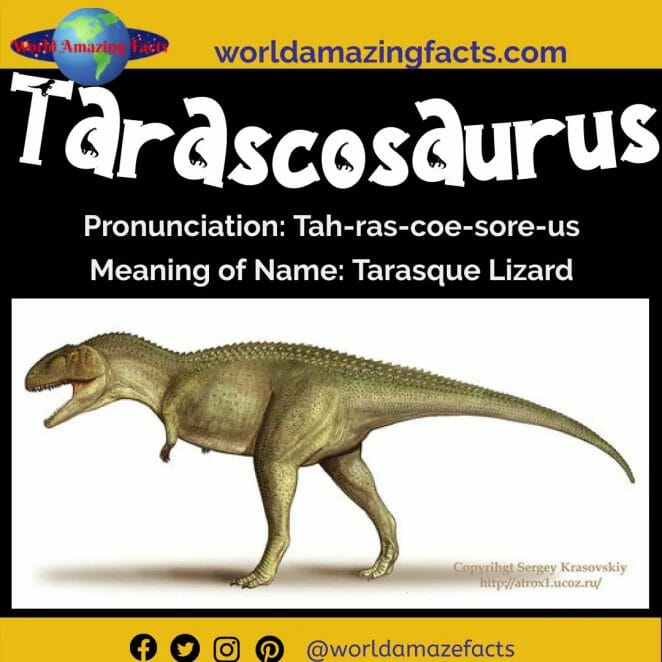 Tarascosaurus is a doubtful type of small Ceratosaurus (perhaps an Abelisaurid) that existed in what is now southern France during the Late Cretaceous period. This carnivore was most likely the nightmare of the smaller vertebrates in its surroundings.

Tarascosaurus gets its name from the Provencal word terraceco (Tarasque is a type of dragon from local legends). The genre name is derived from the Latin name (Salluvia) of a Gallic tribe that lived near Marseilles. 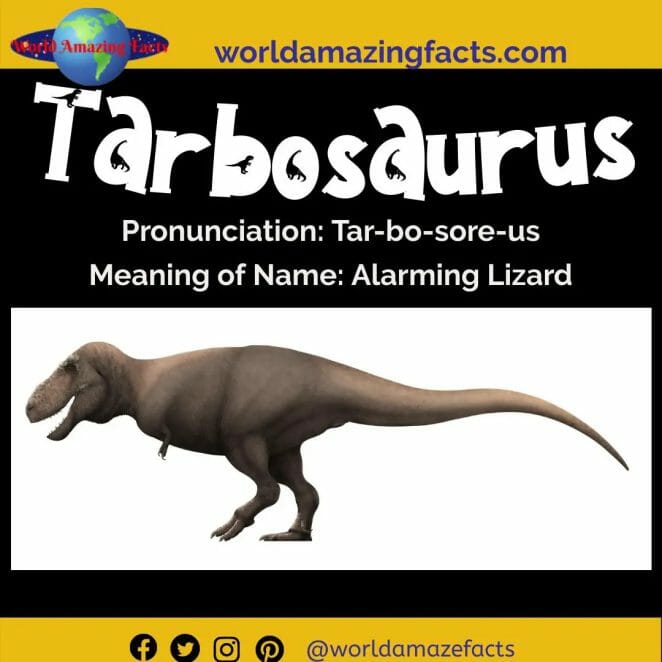 Tarbosaurus is a huge theropod whose remains were unearthed in modern-day Mongolia and, most likely, China. Tarbosaurus was the largest tyrannosauroid to ever exist in Asia, yet it was dwarfed by its famous relative, tyrannosaurus. Many remains of this dinosaur were discovered, allowing for a very comprehensive examination of its structure and phylogeny.

Tarbosaurus is derived from the Greek words tarbos (“fear,” “terror,” and “horror”) and sauros (“reptile”, “lizard”). As a result, the entire thing can be interpreted as “terrible lizard.” Interestingly, this genre epithet incorporates a spelling error: instead of baatar (which means “hero / warrior” in Mongolian), it sounds bataar. 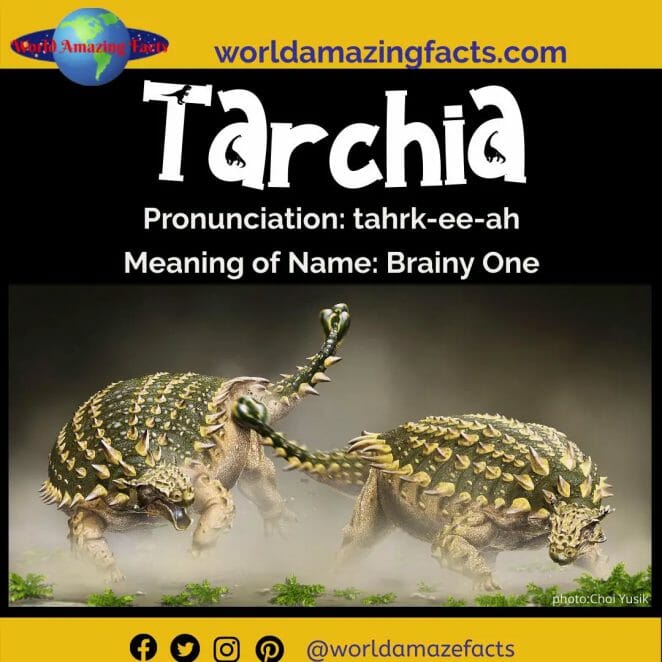 Tarchia is a genus of ankylosaurids from the ankylosaurid family, the bones of which have been discovered in southern Mongolia. Tarchia, like other members of this family, has a complex taxonomic history. According to current understanding, this genus has two species: T. kielanae and T.teresae.

Tarchia is derived from the Mongolian word tarkhi, which means “brain,” and refers to the dinosaur’s comparatively big brain box. Professor Zofia Kielan-Jaworowska, who led Polish-Mongolian paleontological investigations, is honoured by the species name kielanae. In turn, the second species’ epithet relates to Teresa Maryaska, who named the genus Tarchia. 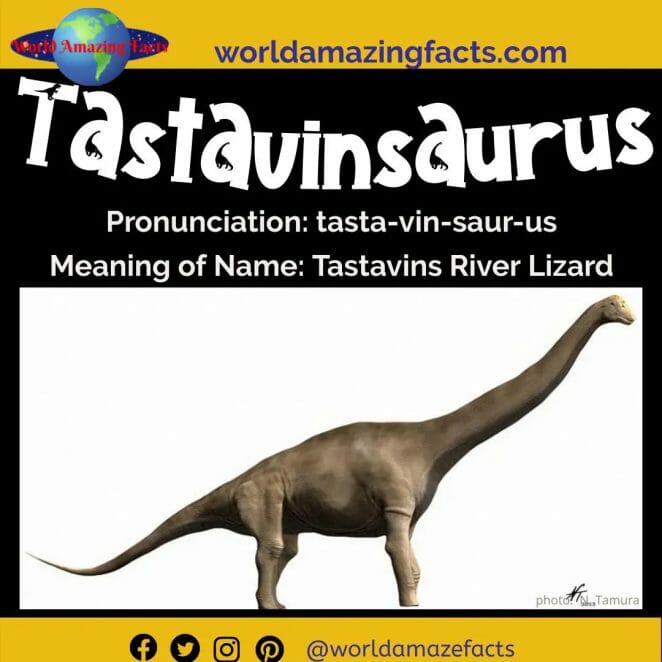 Tastavinsaurus is a sauropoda described for the first time in 2008 from the Early Cretaceous of Spain. Tastavinsaurus sanzi is the only species that has been identified.

Tastavinsaurus gets its name from the Catalan word for wine tester, Tastavin. It is related to the name of the river, Tastavins, and the place where the holotype was located, Penarroya de Tastavins. Sauros is the Greek word for lizard. Professor José Luis Sanz of Madrid is honoured by the genre moniker for his work on Spanish dinosaurs. 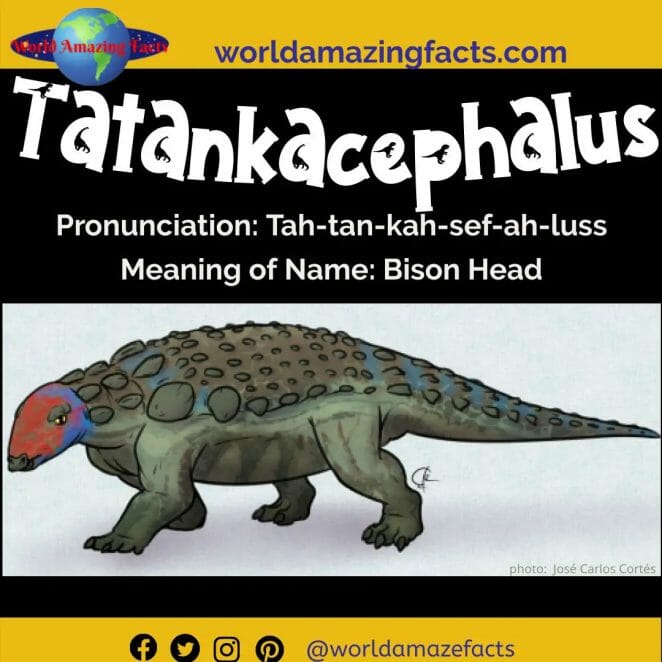 Tatankacephalus was an ankylosaurus that lived in North America during the early Cretaceous period.

Tatankacephalus is a genus name that meaning “Bison head.” It is formed from the terms tatanka (Oglala for bison) and cephalus (from the Latin head). The term cooneyorum refers to John Patrick Cooney’s family. 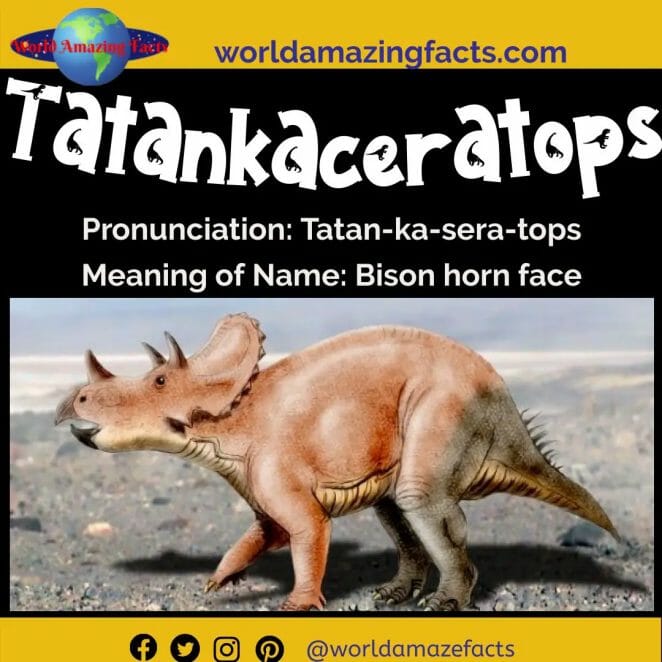 Tatankaceratops was a horned dinosaur that existed in North America during the Late Cretaceous period (USA – South Dakota). It was a herbivore, like all ceratops. Tatankaceratops coexisted with Triceratops, Edmontosaurus, and Tyrannosaurus in these locations. However, it is unclear if it was a miniature Triceratops or a different genus. 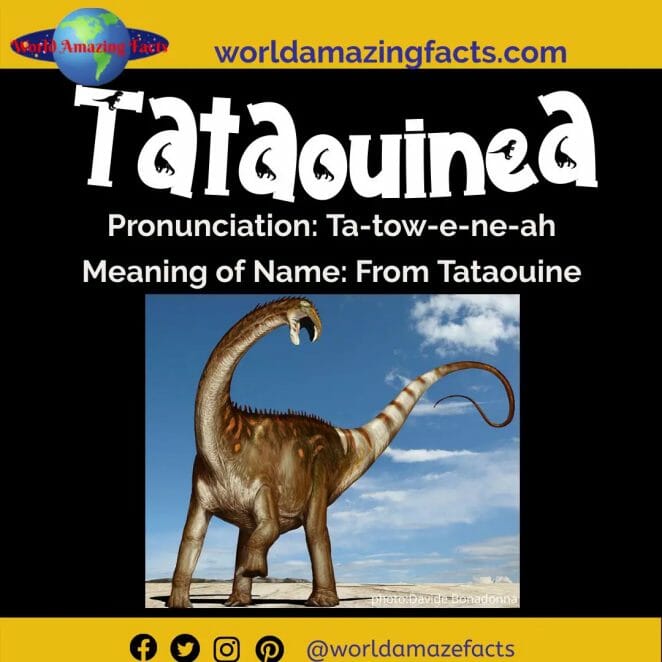 Tataouinea hannibalis is an uncommon sauropoda with a large number of cavities in the skeleton into which air bags have pierced.

Tataouinea gets its name from Tataouine (Tatawin), the Tunisian location where it was discovered, and Hannibal Barca, a Carthaginian military commander who marched through southern Europe with his troop of war elephants. 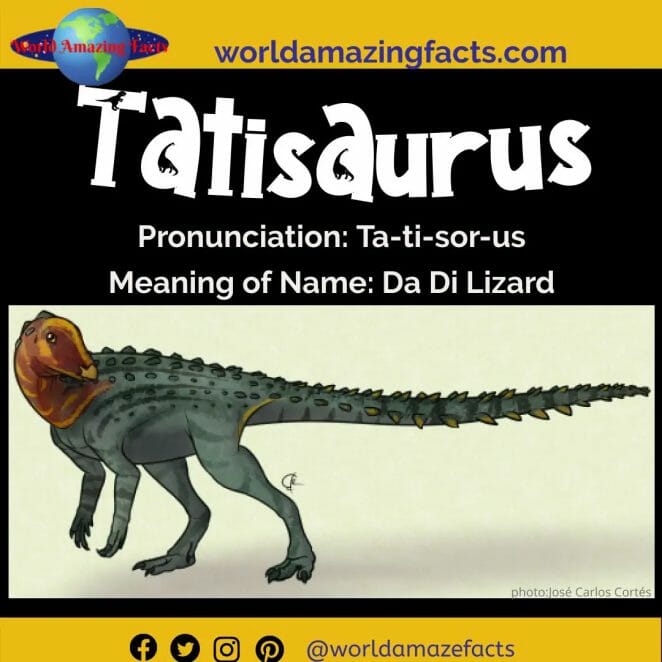 Tatisaurus was one of the most primitive thyrophores, descending (as do all avian pelvises) from the most basal and early representative of Ornithischia, most likely akin to Pisanosaurus, and possibly even from Tatisaurus. Tatisaurus lived in the Early Jurassic period in what is now China.

Tatisaurus is derived from the Chinese words da (great) and di (earth), hence the name translates as “great earth lizard.” The genre name oehleri possibly refers to someone named Oehler.