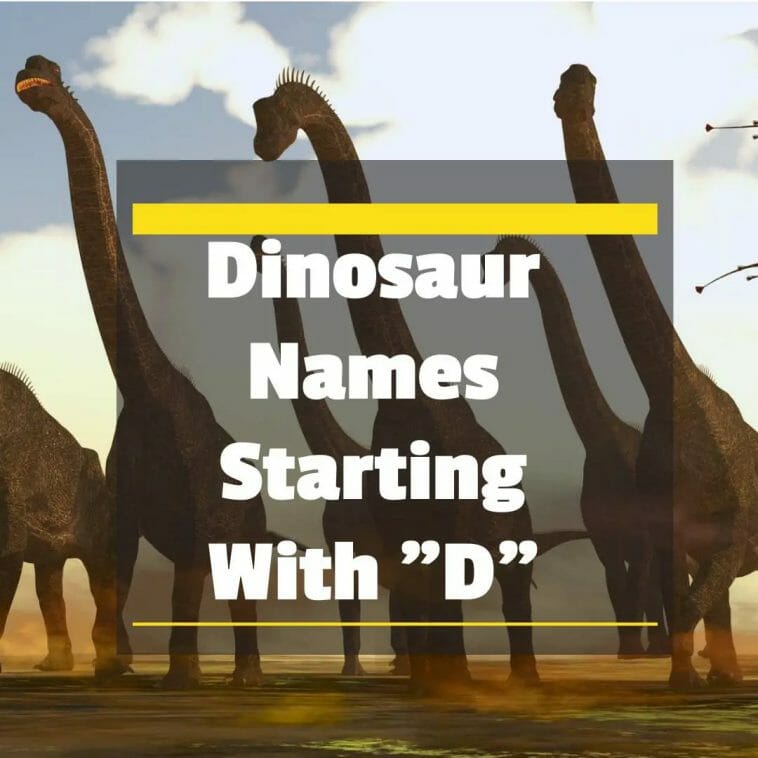 Check out the alphabetical list of dinosaur names beginning with the letter “D.” We’ll look at dinosaur pictures and discuss what their names mean, as well as learn more about dinosaur facts.

Dinosaurs with names that begin with the letter “D”

Contents for Dinosaur Names that Start with “D” 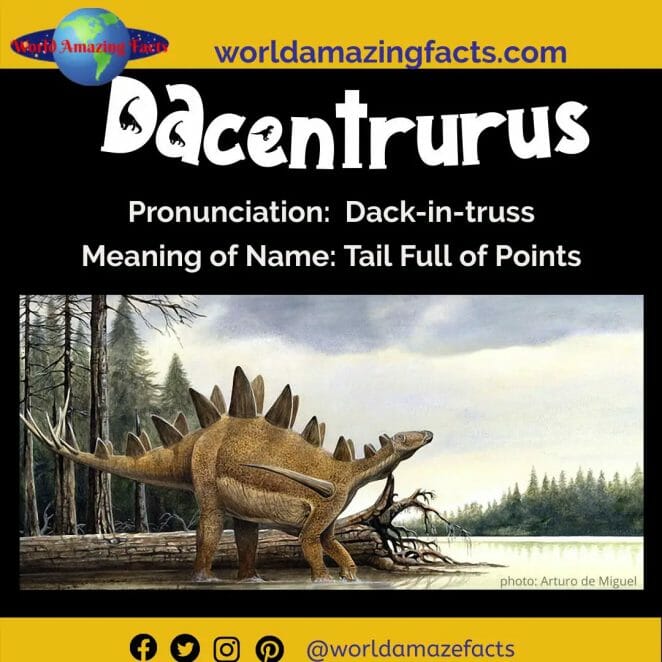 Dacentrurus is a huge stegosaurid dinosaur that lived in Europe during the Late Jurassic and perhaps the Early Cretaceous.

The origin of the name Dacentrurus is Greek: da – (very) + kentron (spur, spike) + oura (tail). Probably, the species epithet (armatus) is also associated with its armament. 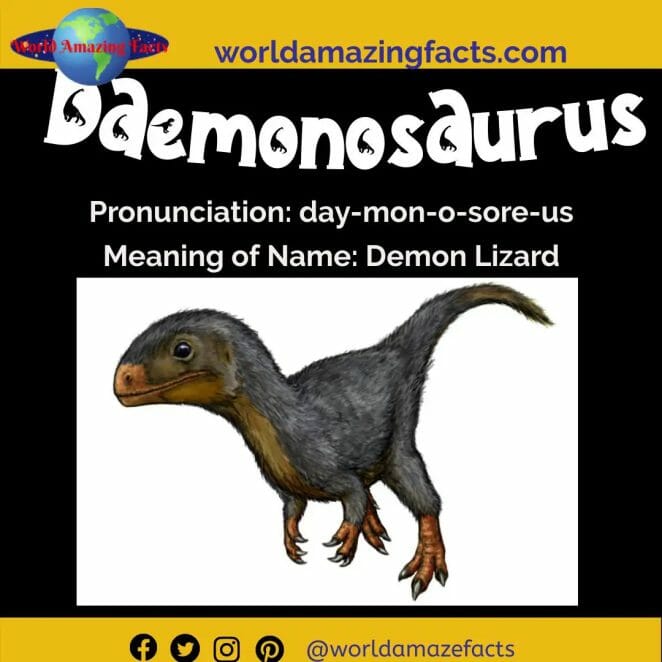 Daemonosaurus is the genus name for an early, tiny, and likely quite primitive theropod. Daemonosaurus lived in what is now North America during the late Triassic period.

The genus name Daemonosaurus is derived from Greek and relates to the “Ghost Ranch” mythology of malevolent spirits. This dinosaur’s species name, chauliodus, which is likewise borrowed from Greek, translates to “large-toothed” and alludes to its enormous front teeth. 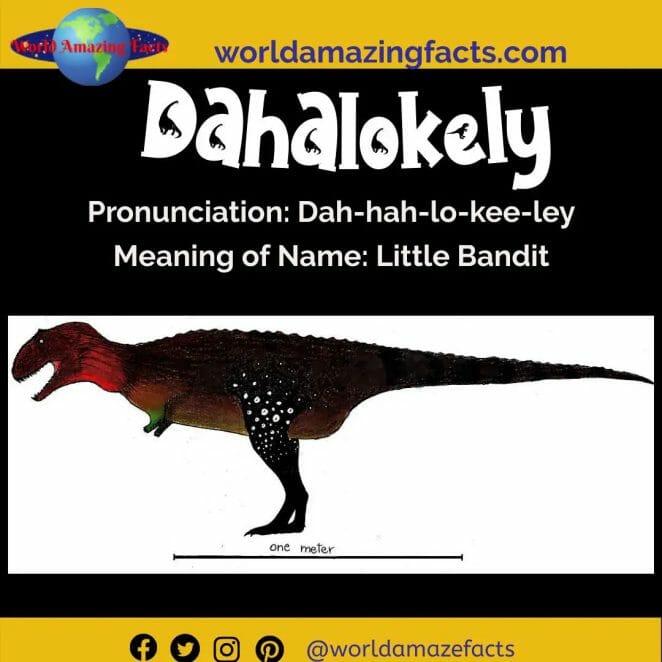 Dahalokely was a tiny carnivorous theropod discovered in Madagascar during the Late Cretaceous period.

The name Dahalokely is derived from the Malagasy words dahalo and kely, which indicate “bandit” and “little,” respectively, in reference to the animal’s presumed predatory lifestyle and diminutive size. This dinosaur was geographically isolated in Indo-Madagascar, hence the specific name tokana (“lonely”). 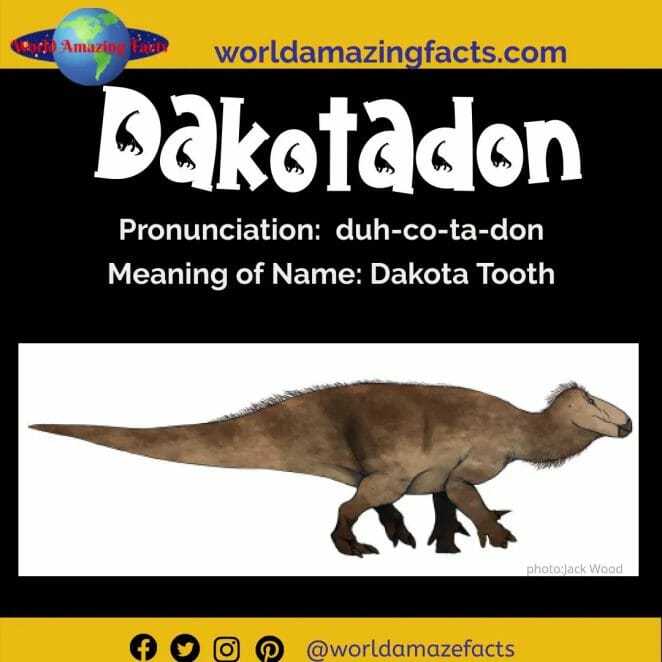 Dakotadone is a kind of primitive iguanodont that once inhabited in the United States (South Dakota state). Dakotadone skeletons were discovered in the Lakota Formation.

Dakotadon is named for the state where its holotype was discovered. It translates into “Dakota’s tooth.” The species name lakotaensis relates to the Lakota Formation, where its fossilised remains were discovered. 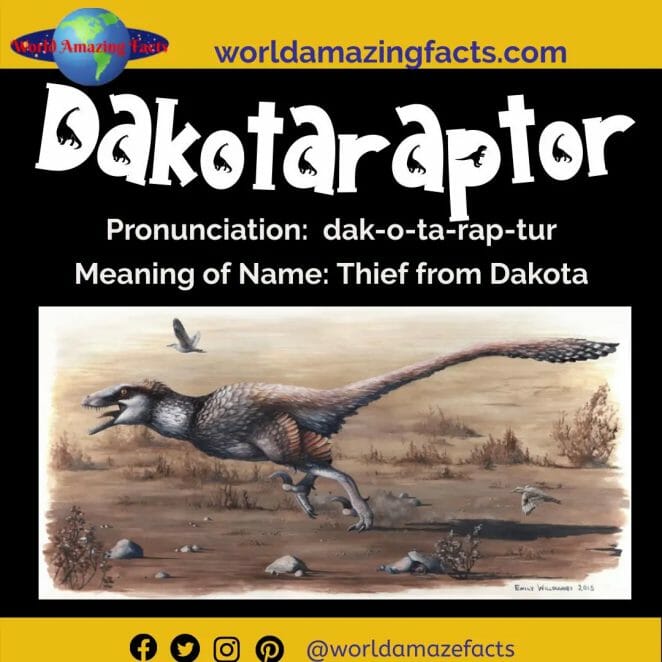 Dakotaraptor was a huge dromeosaurid whose remains were discovered in western North America. It was comparable in size to the largest members of this family, such as Utahraptor. Dakotaraptor was most likely a fearsome predator, hunting medium-sized animals and possibly even the largest herbivorous dinosaurs of his time. It shared its habitat with two of the most renowned dinosaurs, the massive theropod Tyrannosaurus and the horned Triceratops.

Dakotaraptor means “Dakota robber” and relates to the location where theropod remains were discovered, as well as the theropod’s alleged lifestyle. The word raptor appears frequently in the names of dinosaurs in the Dromaeosauridae family (eg Velociraptor , Utahraptor , Acheroraptor ). The genre name pays homage to palaeontologist Walter Stein. 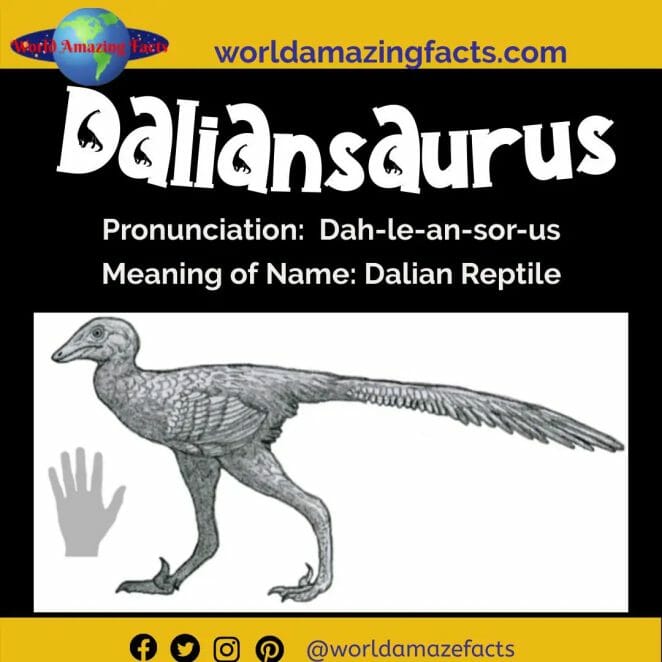 Daliansaurus is a Troodontidae family predatory dinosaur that was possibly feathered. Daliansaurus lived in what is now China during the early Cretaceous period.

The generic name is derived from the city of Dalian in Liaoning Province’s southernmost region and the Greek word sauros, which means “lizard” or “reptile.” The genre term relates to the previously mentioned Liaoning province. 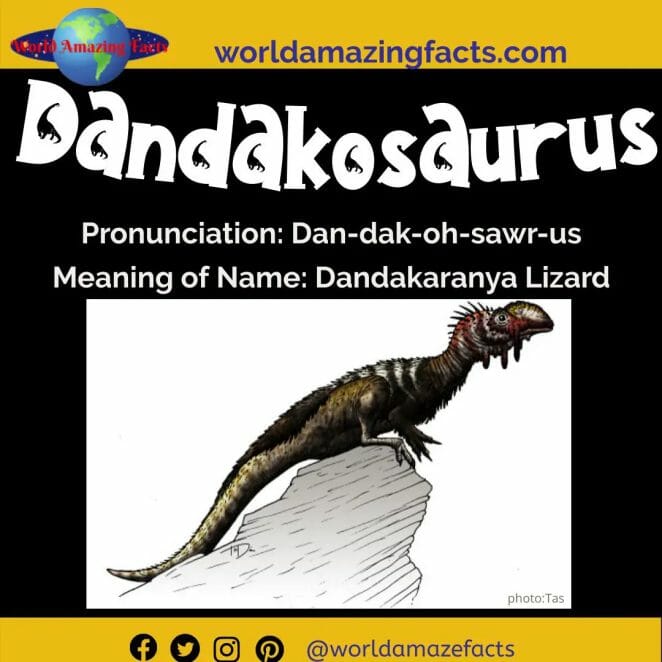 Dandakosaurus is a poorly understood theropod with a difficult to identify taxonomic position that lived in early Jurassic India. Dandakosaurus is Latin for “Dandako Lizard.” The genre’s name references to India. 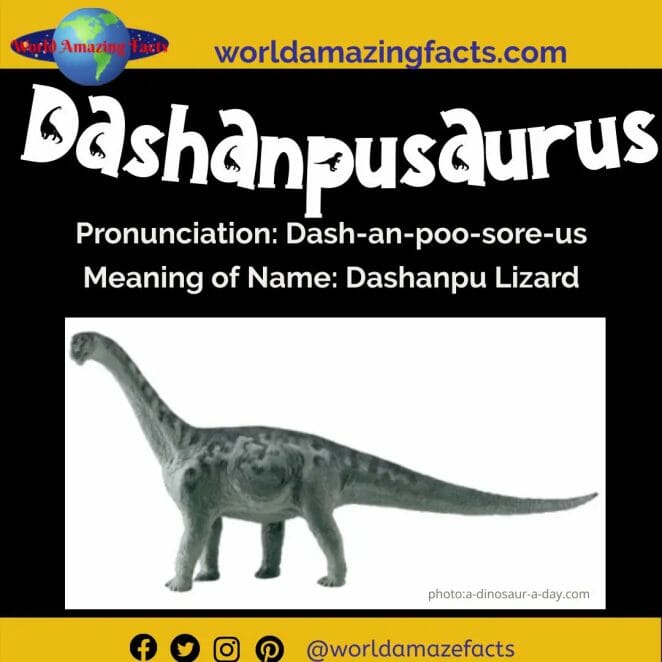 Dashanpusaurus was a type of sauropod dinosaur that lived in the middle of the Jurassic period. Its name comes from the township where it was found, Dashanpu.

The dinosaur was described in 2005 by Peng Guangzhao, Ye Yong, Gao Yuhui, Shu Chunkang, and Jiang Shan. Dashanpusaurus dongi, its only known species, was named after the palaeontologist Dong Zhiming. 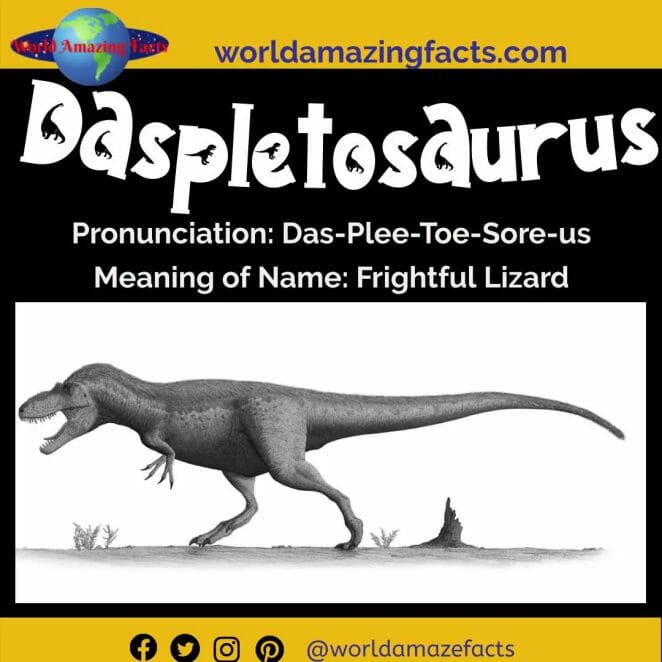 Daspletosaurus was a big tyrannosaurid. So far, two species have been identified as significant: D. torosus and D. horneri. Daspletosaurus, for example, is extremely similar to its larger and more well-known relative, tyrannosaurus.

Daspletosaurus is derived from the Greek words dasplet, which means “terrible,” and sauros, which means “lizard.” The name of a common species, torosus, originates from Latin and means “fleshy,” referring to a big body (Russell, 1970), whereas D. horneri honours the famous palaeontologist Jack Horner. 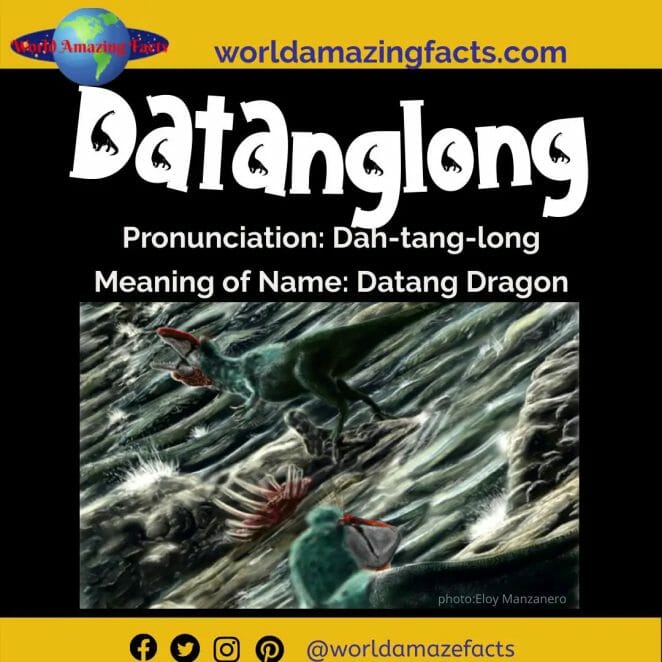 Datanglong is a huge theropod that lived in China during the early Cretaceous period. It only has one partial skeleton. This animal’s exact categorization is difficult to determine.

The name Datanglong is derived from the Chinese city of Datang, where theropod bones were discovered, and the word long, which means “dragon” in Mandarin. The species name guangxiensis relates to the province where the datanglong fossils were discovered. 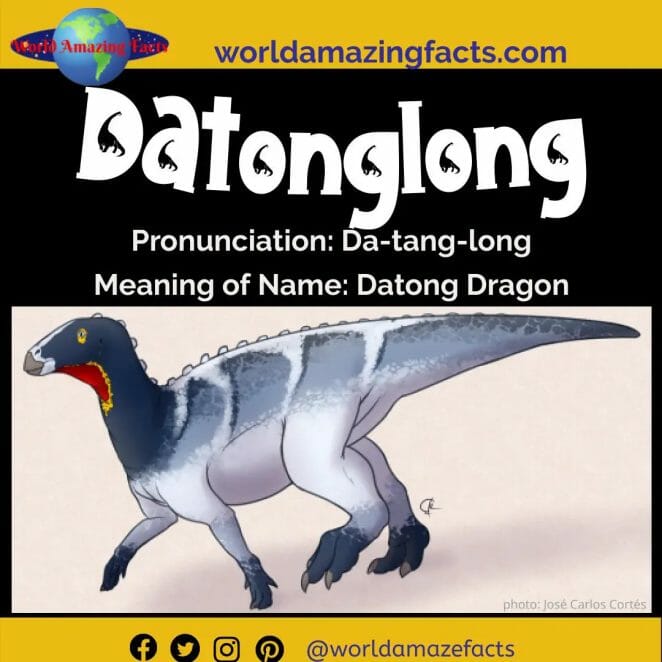 Datonglong is a Hadrosauroidea ornithopod that lived in China during the late Cretaceous period. Datonglong was named in 2016.

The generic name is a combination of the city name Datong and the Chinese word long, which means dragon. The sole known species, Datonglong tianzhenensis, gets its name from the Tianzhen region. 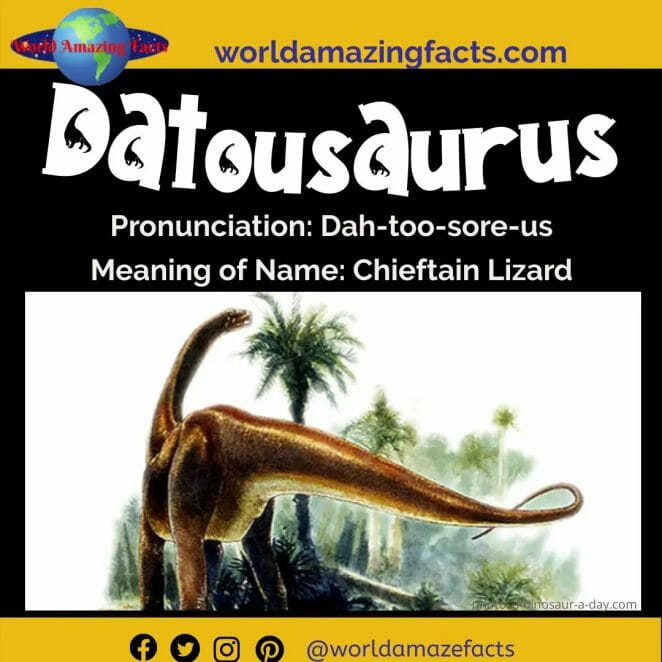 The fossils of Datousaurus, a prehistoric medium-sized sauropod, were unearthed in China. Datousaurus was a member of the so-called ” Shunosaurus fauna “, which also included the aforementioned Shunosaurus, some Omeisaurus, Protognathosaurus, Xiaosaurus, Huayangosaurus, and Gasosaurus species.

In Chinese, datou means “big head.” The ending – ensis suggests that the species epithet bashanensis may allude to a specific localization name. 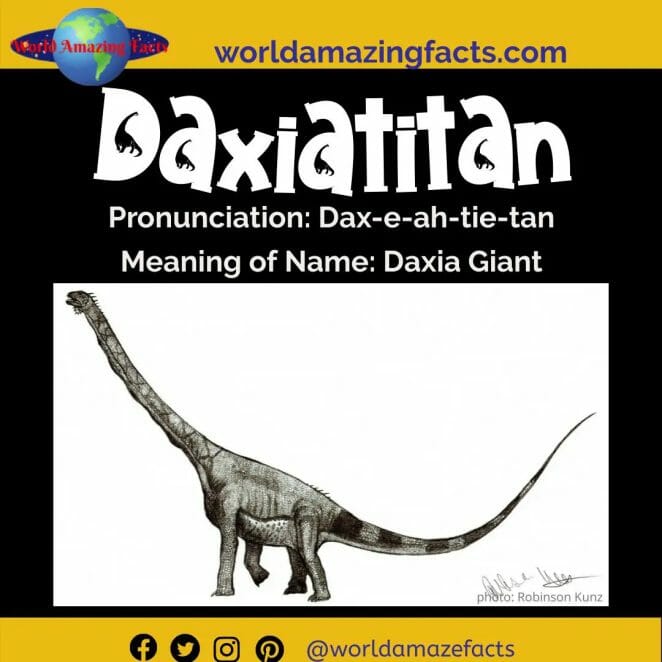 Daxiatitan is a kind of large sauropod that lived in present-day China during the Early Cretaceous. Daxiatitan was described in 2008 based on a partial skeleton recovered in the Hekou group sediments (Lanzhou Basin, Gansu Province, China ).

The generic term alludes to the location of the Daxiatitan remains. Daxia is the Chinese name for one of the Yellow River tributaries that flows through the Linxia district of Gansu Province. The second element of the name (titan) is a term that is frequently used to name sauropods (particularly titanosaurs), and it represents greatness. It is derived from the Greek language.

In turn, the genre name (bingling) is derived from the Tibetan phrase Bingling, which means 100,000 Buddhas. It refers to the Bingling Temple, a popular tourist site near the Liujiaxia Dam, about 80 kilometres southwest of Lanzhou, Gansu’s city. 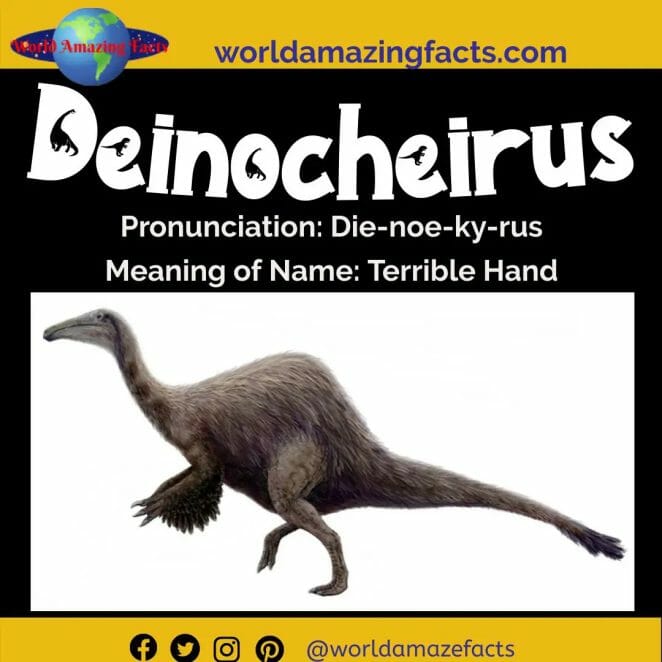 Deinocheirus is a huge and distinctive theropod that lived in Mongolia during the Late Cretaceous period. Deinocheirus has long been regarded as one of the most enigmatic dinosaurs. Deinocheirus was discovered to be a magnificent ornithomimosaurus with a long, toothless skull and massive forelimbs. 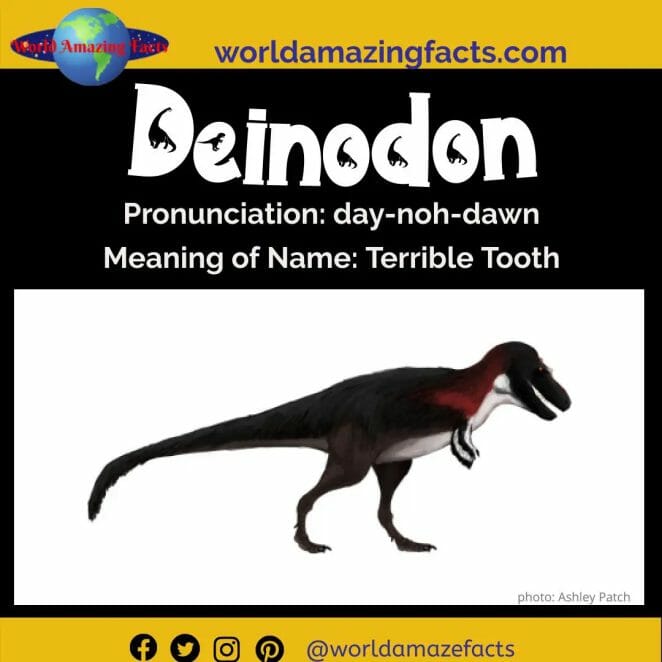 Deinodon is a shady theropod of the Tyrannosauridae clade (family) that existed in North America during the Late Cretaceous period. It is known only for its teeth, which are indistinguishable from the major forms of tyrannosaurids. As a result, it is widely regarded as a nomen dubium.

There are approximately 20 species attributed to the genus Deinodon in the literature, but none of them are scientifically significant today. The majority of them are very certainly synonyms of other tyrannosaurs, potentially non-tyrannosaurids. Some of the species have been incorrectly assigned to the genus Deinodon, despite the fact that their remnants belonged to completely different theropod clades.

Deinodon is a Greek word that means “terrible tooth.” 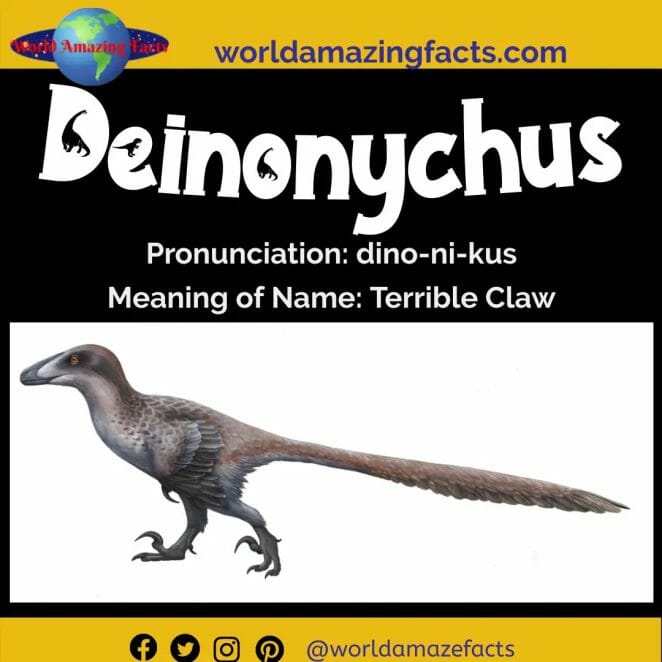 Deinonychus is a tiny carnivorous theropod genus in the Dromaeosauridae family. The description of this tiny predator in 1969 drastically revolutionised people’s perceptions about dinosaurs, who were previously thought to be sluggish and dumb creatures. Interestingly, palaeontologist Gregory Paul previously regarded deinonychus to be a species of the genus Velociraptor, which was discovered in Mongolia tens of millions of years later.

Deinonychus is Greek for “terrible claw.” The Deinonychosauria clade, which includes the Dromaeosauridae and Troodontidae, was also named after this dinosaur. Antirrhopus means “counterweight” and alludes to the unique structure of the animal’s tail at the time of its naming. 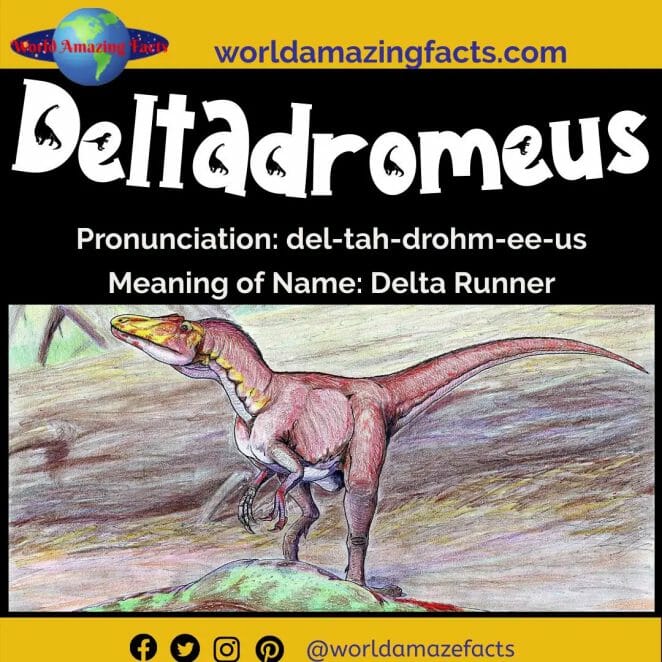 Deltadromeus was a huge and swift theropod that lived in what is now Africa during the Late Cretaceous period. It is still shrouded in mystery.

Deltadromeus agilis is a Greek word that means “fast runner from the delta” (from Greek delta – “delta”, Greek dromeus – “runner” and Latin agilis – “fast”). The name refers to the delta facies where the holotype was discovered, as well as the proportion of the hind limbs that indicates the ability to sprint swiftly. 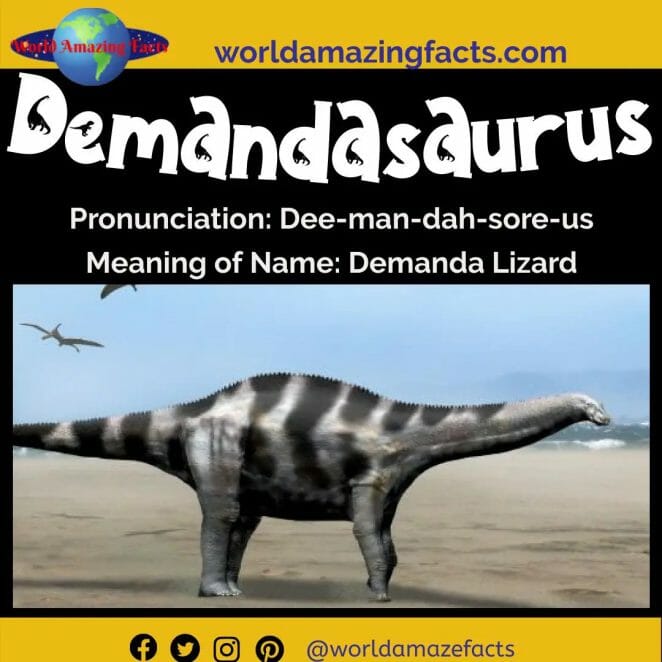 Demandasaurus was a sauropod that lived in what is now Spain during the early Cretaceous period. It is differentiated by nine automorphs pertaining to the morphology and structure of teeth and vertebrae in certain parts of the spine (cervical, dorsal and caudal).

Demandasaurus is a generic name that means “the lizard of Demanda,” the mountain whose slopes his fossil bones were discovered. The Darwin species name honours Charles R. Darwin, the father of evolutionary theory.