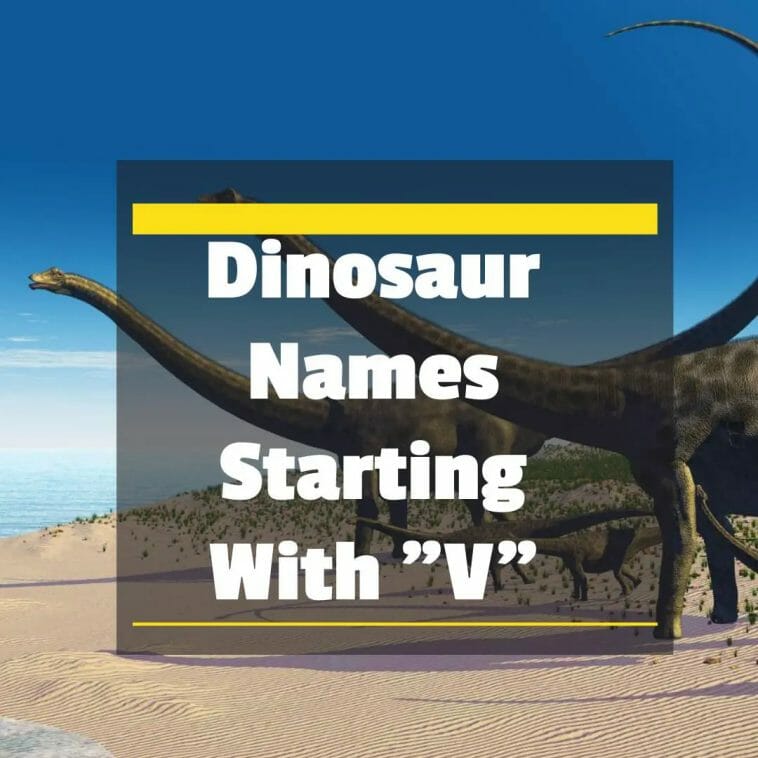 Check out the alphabetical list of dinosaur names beginning with the letter “V”. We’ll look at dinosaur pictures and discuss what their names mean, as well as learn more about dinosaur facts.

Dinosaurs with names that begin with the letter “V”

Contents for Dinosaur Names that Start with “V” 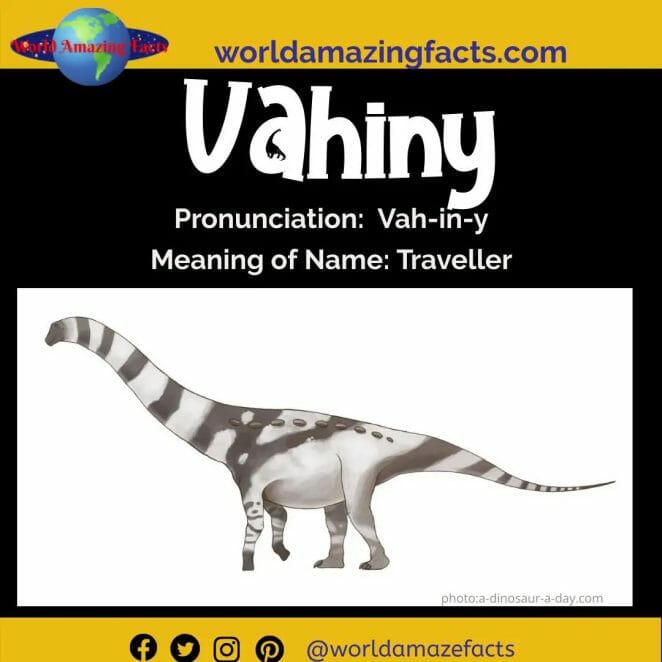 Vahiny are a kind of sophisticated titanosaur from Madagascar’s late Cretaceous epoch.

Vahiny, which means “wanderer” or “guest” in Malagasy (Madagascar’s official language), is related to the taxon’s rarity in the Mahajanga Basin. The species is named after Charles Depéret, a French palaeontologist who described the initial Madagascar dinosaur material and discovered the sauropodian nature of Malagasy osteoderms. 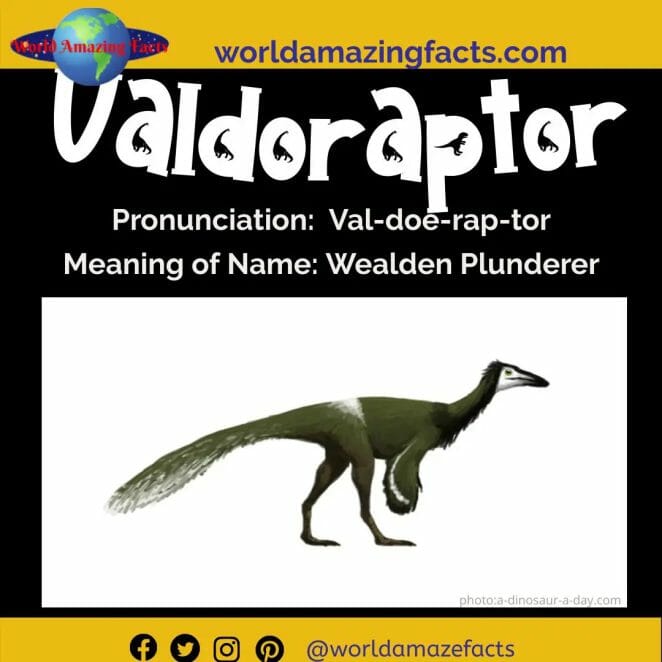 Valdoraptor was a medium-sized theropod that lived in what is now England during the early Cretaceous period. 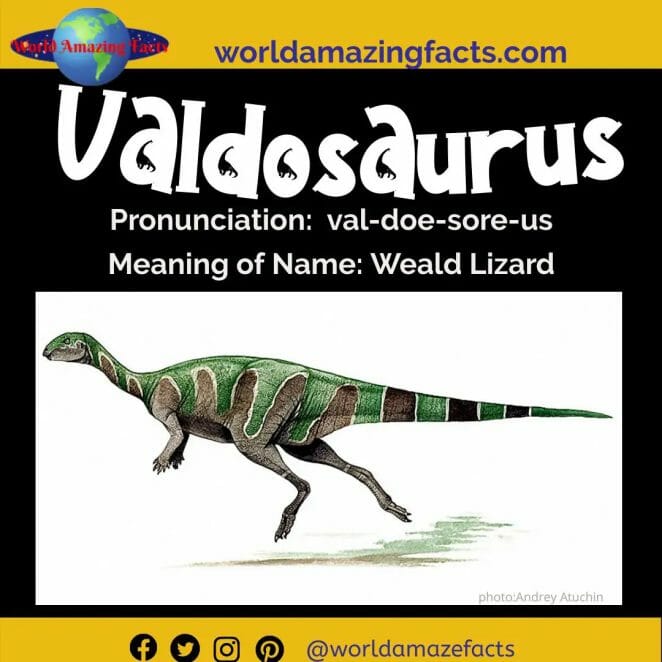 Valdosaurus was a primitive iguanodont that existed in the early Cretaceous period in the United Kingdom, Spain, and maybe Romania.

Valdosaurus derives its generic name from the Latin valdus, which refers to the Wealden rock group, of which the Wessex Formation is a component. The term genre comes from the Latin word caniculatus, which means “channel” or “conduit.” It refers to the deep grooves between the femur’s condyles. 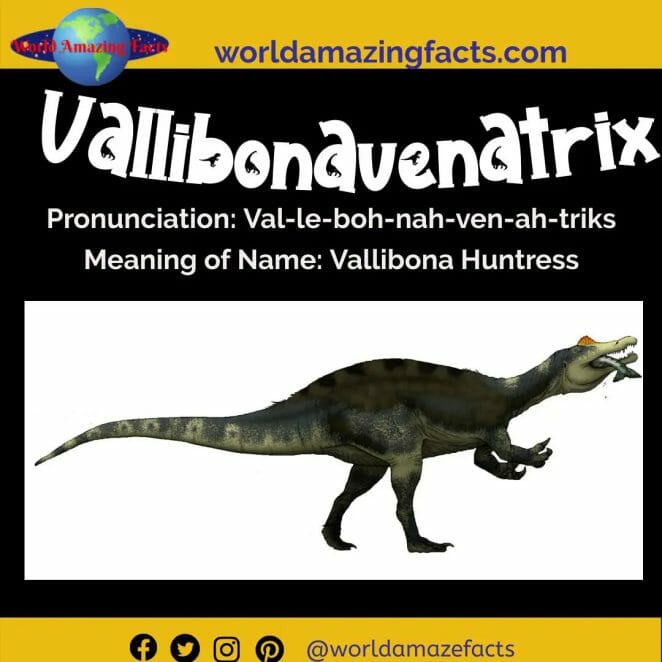 Vallibonavenatrix was a Spinosauridae family medium-sized theropod that lived in what is now Spain during the early Cretaceous period.

The name Vallibonavenatrix is derived from the Spanish city of Vallibona and the Latin word venatrix (“hunter”). The genre name honours the holotype’s discoverer, Juan Cano Forner. 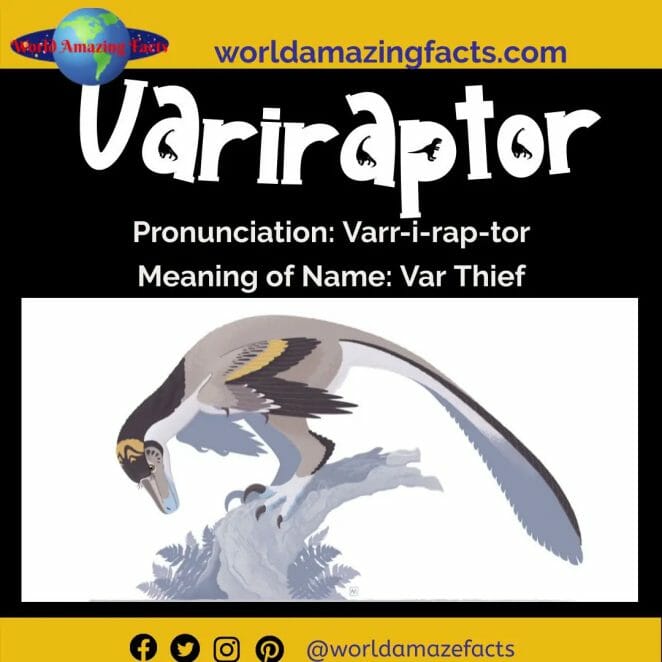 Variraptor is the genus name for a tiny theropod of the Dromaeosauridae family that lived in what is now France during the Late Cretaceous period.

Variraptor is derived from the Var department and the Latin raptor (“thief”, “robber”). The name honours Patrick and Annie Mechin, who discovered the variraptor bones. 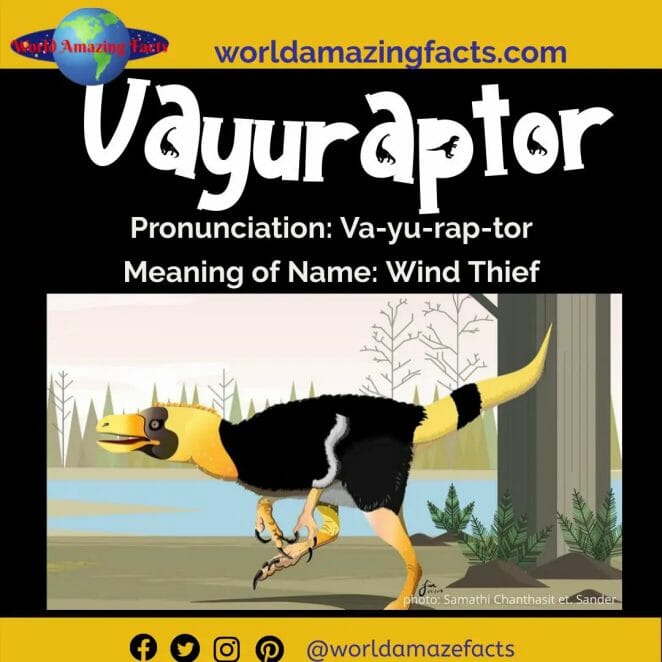 Vayuraptor was a medium-sized theropod that existed in today’s Thailand during the early Cretaceous period.

Vayuraptor derives its name from the Indian god of wind (Vayu in Sanskrit) and the Latin word raptor (“thief”). The genre name relates to Thailand’s Nong Bau Lamphu region. 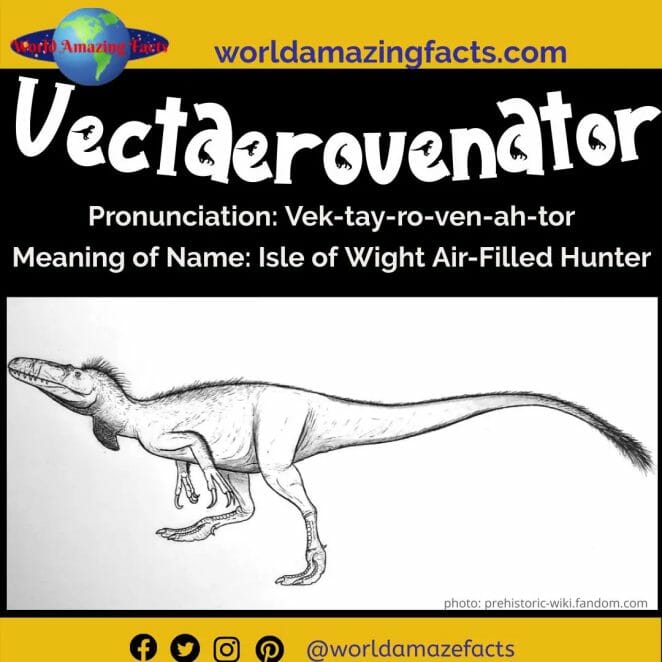 Vectaerovenator is a theropod of unknown systematic position that existed in modern-day England during the early Cretaceous epoch. A group of palaeontologists led by Chris Barker identified and characterised it in 2020.

The name Vectaerovenator is derived from the Latin vectis (a reference to the finding of Vectaerovenator bones on the Isle of Wight), the Greek aeor (“air” – a reference to the skeleton’s high degree of pneumatization), and the Latin venator (“hunter”). The species name inopinatus means “unexpected, because the rock layers from which this animal evolved are deficient in dinosaur waste.” 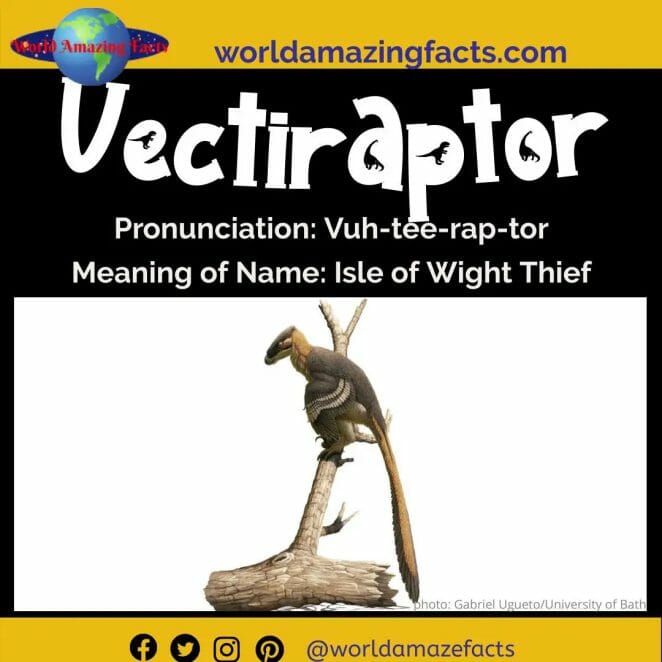 Vectiraptor is a small predatory dinosaur from the Dromaeosauridae family that lived in the early Cretaceous period on the Isle of Wight. Nicholas Longrich and colleagues named and described the Vectiraptor after discovering a few remains in 2004.

Vectiraptor is derived from the Latin terms for the Isle of Wight, Vectis and raptor (“thief”, “robber”). Mick Green, the discoverer of the remains, is honoured with the genre moniker. 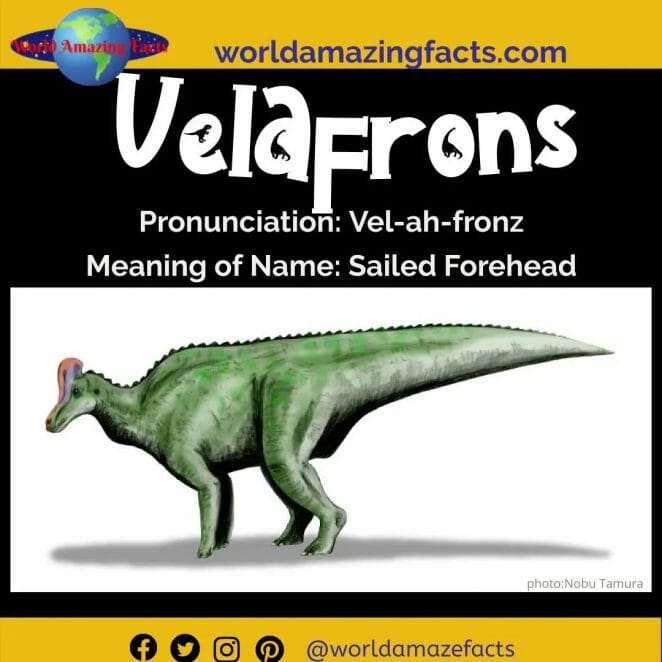 Velafrons is a lambeosaurin (crested hadrosaurid) genus whose fossils were discovered in late Campanian strata in Mexico. The extracranial skeletons of lambeosaurins are remarkably similar, hence it was regarded a different genus based on the structure of the skull.

The term Velafrons alludes to a dinosaur’s unique crest and means “sail forehead”; it was formed by combining the words vela (Spanish for sail) and frons (Latin for forehead). The species name (coahuilensis) was derived from the state of Coahuila in northern Mexico, where it was discovered.

Velocipes is a controversial early theropod. Velocipes may be related to or belong to the neoteropods. Velocipes lived in today’s Poland during the late Triassic period.

Huene did not cite the name’s origin in his article, but Velocipes is thought to be derived from the Latin terms velox (“quick” or “agile”) and pes (“foot”), which most likely relates to Huene’s stated speed of the animal.

The species name guerichi is most likely a tribute to Georg Gürich, a geologist from the Geological Museum in Wrocaw (formerly Breslau) who discovered many Triassic reptile fossils in Upper Silesia, including the Velocipes holotype. 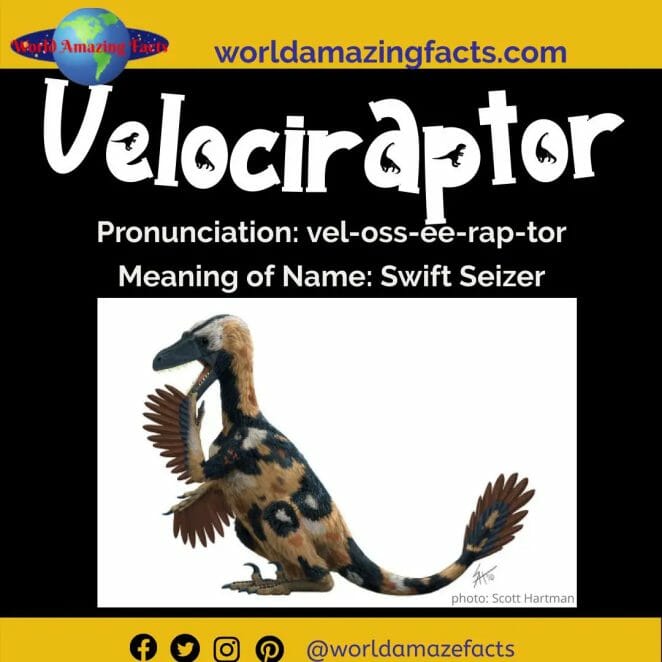 Velociraptor is a small theropod that lived towards the end of the Cretaceous period in the present-day Gobi Desert.

Velociraptor is derived from the Latin words velox (speed) and raptor (thief) and means “rapid thief.” V. mongoliensis gets its name from the location where the bones were discovered: Mongolia. Whereas the species name V. osmolskae was given in honour of prof. Halszka Osmolska (1930 – 2008), an exceptional Polish dinosaur researcher who described over a dozen new species of this fascinating group of creatures.

Velocisaurus was a tiny theropod of the Ceratosauria group that existed in present-day Argentina during the late Cretaceous period. It is a mystery creature noted for its fractured remnants.

Velocisaurus is derived from the Latin velox (“fast”) and the Greek sauros (“reptile”, “lizard”). It refers to the anticipated capacity to run quickly. The species epithet unicus refers to the theropod’s peculiar anatomy. 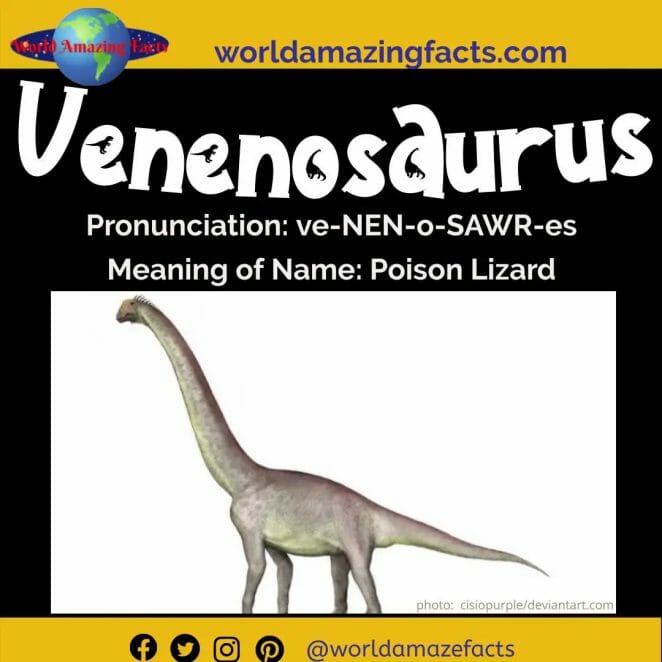 Venenosaurus was a tiny sauropod that existed in what is now the Eastern United States during the Early Cretaceous period. Venenosaurus lived in the middle Aptian period.

Venenosaurus is Latin for “Poison Strip Lizard” (Latin venenum means poison, meaning poison in English , which also refers to the place where the remains were discovered). Tony DiCroce, a Denver Natural History Museum volunteer who worked with the Cedar Mountain fossils, is honoured with the genre moniker. 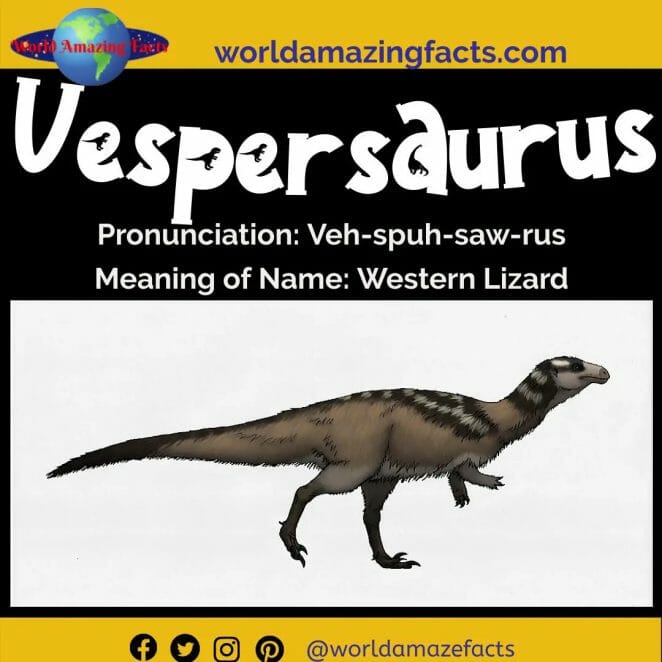 Vespersaurus is a small theropod from the enigmatic Noasauridae family that lived in today’s Brazil during the early Cretaceous epoch. Max Cardoso Langer and colleagues named Vespersaurus in 2019. The particular structure of the foot of this species was an intriguing trait, implying that the animal probably rested its body weight on one finger.

The name Vespersaurus is derived from the Latin vesper (“evening,” “sunset”) and the Greek sauros (“sunset”) (“reptile”, “lizard”). It refers to Cruzeiro do Oeste (“Western Cross”), where the remains of this little theropod were discovered. The species name paranaensis is taken from the name of the Brazilian state of Paraná. 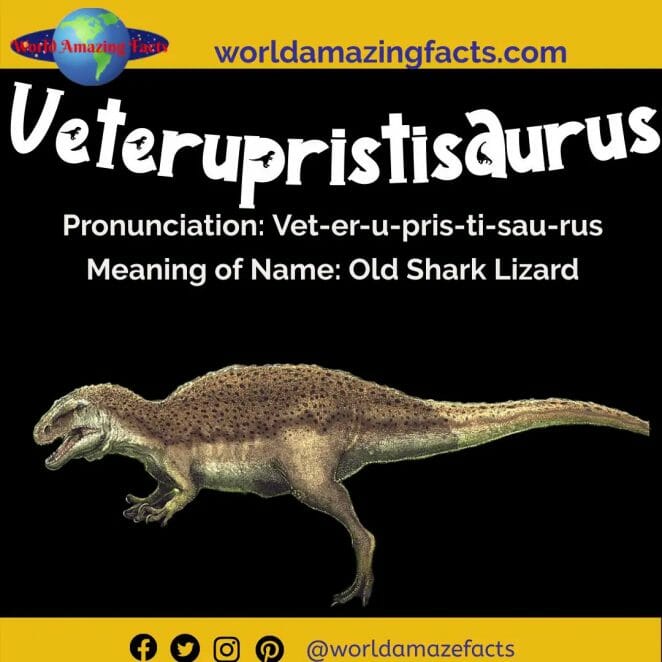 Veterupristisaurus is a carcharodontosaurid that lived in what is now Africa during the Late Jurassic period and is likely linked to Acrocanthosaurus.

Veterupristisaurus is a combination of the Latin words veterus (old), pristis (big sea monster, generally a shark), and sauros (Greek lizard), referring to the fact that it is the oldest known lizard shark – carcharodontosaurid. Angela C. Milner is honoured by the species epithet for her contributions to vertebrate palaeontology and multiple papers on theropods.

The Viavenator was a carnivorous theropod that lived during the Late Cretaceous period in what is now Argentina. The finding of Viavenator helped scientists to bridge the gap between the Cenomanian and Turonian representatives of the Brachyrostra clade and the advanced Campanian and Maastrichtian species.

Viavenator means “road hunter” and is derived from the Latin words “via” for “road” and “venator” for “hunter, hunter.” ExxonMobil is recognised by the genre epithet exxoni for its dedication to the paleontological legacy of La Invernada in the province of Neuquen, Argentina.

Volgatitan is a kind of sauropod from the Titanosauria group that lived in what is now Eastern Europe during the early Cretaceous period. It is the Northern Hemisphere’s oldest known titanosaur representative. With a weight estimated at 14-21 t (average 17.3 t), it clearly outweighed the largest current terrestrial creatures, but it was of ordinary body size for a sauropod.

Volgatitan was named in 2018 by Alexander Averianov and Wladimir Efimov, two Russian palaeontologists. Volgatitan is a combination of the Volga River and Greek mythology’s “titans.” Simbirskiensis is derived from Simbirsk, the former name of Ulyanvoska. 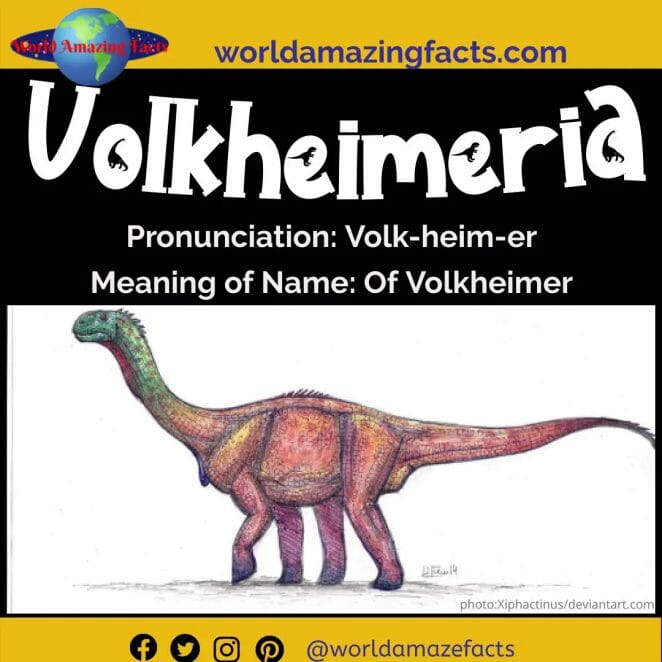 Volkheimeria was a sauropod that lived in what is now southern Argentina during the Early Jurassic period. Its initial remnants were discovered in the 1960s in Caodon Asfalto Formation strata going back 177-170 million years. In addition to the volkemeria, there were the far more well-known Patagosaurus, as well as the Tetanurans, Condorraptor and Piatnitzkysaurus.

The generic name honours the German palaeontologist Wolfgang Volkheimer, while the genre epithet derives from the Chubut area, where the fossils were discovered. 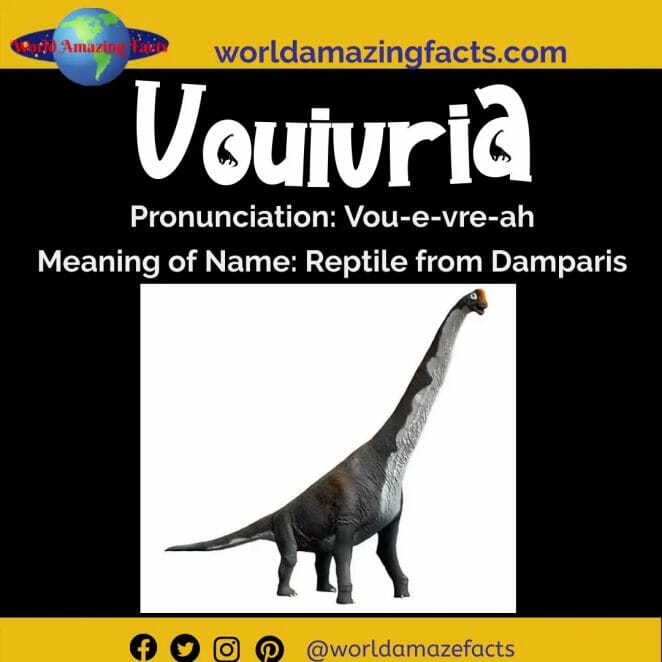 Vouivria is the most primitive and oldest known member of the Brachiosauridae group. In the Late Jurassic period, Vouivria lived in what is now France. Vouivria fossils were formerly attributed to the Bothriospondylus sack taxon.

The generic name Vouivria is derived from the Old French word vuivre, which is derived from the Latin word vipera, which means viper. La vouivre, or wyvern, is a winged reptile related to dragons, according to local folklore in the Franche-Comté region (where the holotype was discovered). The name Vouivria also honours the great French novelist Marcel Aymé, who created La Vouivre, a lovely woman dwelling in the marshes near Dôle (Franche-Comté) and guarding a precious ruby. Damparis, the location of this dinosaur’s fossil remains, inspired the species name damparisensis.

Vulcanodon karibaensis was a primitive sauropod that lived in what is now Zimbabwe between 199 and 188 million years ago. In 1969, a typical Vulcanodon specimen was discovered on Lake Kariba’s island 126/127. A. Gibson, the port manager, discovered the skeleton in a sandstone layer inside a cliff on the northwest side of the island. The Forest Sandstone and Batoka Basalt formations’ deposits are exposed at this site.

Initially, it was considered that the Vulcanodon’s bones came from the later unit, hence the name. Michael A. Raath of the University of Witwatersrand in Johannesburg, South Africa, formally described the Vulcanodon dinosaur in 1972. Its name translates as “Lake Kariba volcanic tooth.”