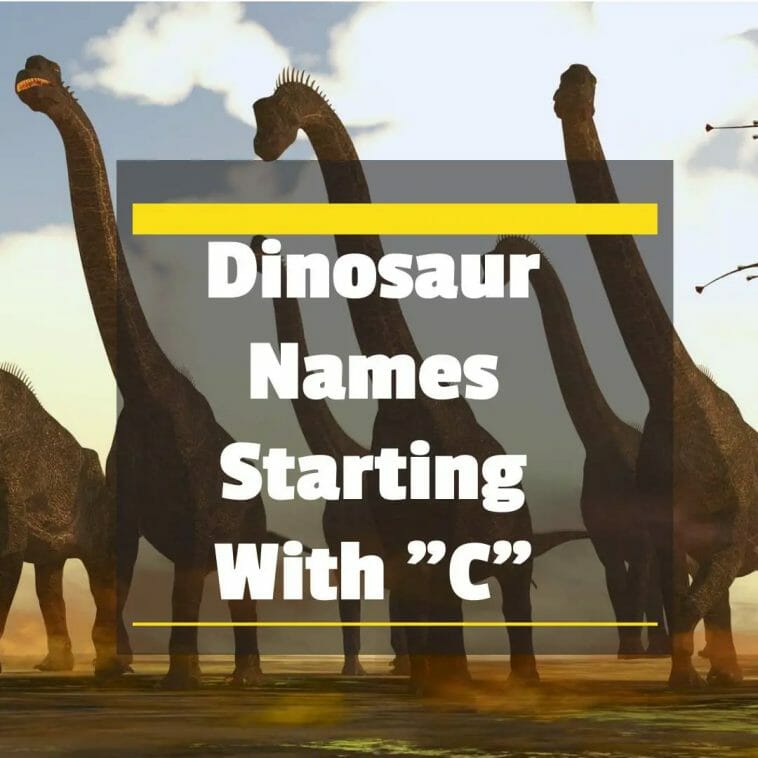 Check out the alphabetical list of dinosaur names beginning with the letter “C.” We’ll look at dinosaur pictures and discuss what their names mean, as well as learn more about dinosaur facts.

Dinosaurs with names that begin with the letter “C”

Contents for Dinosaur Names that Start with “C” 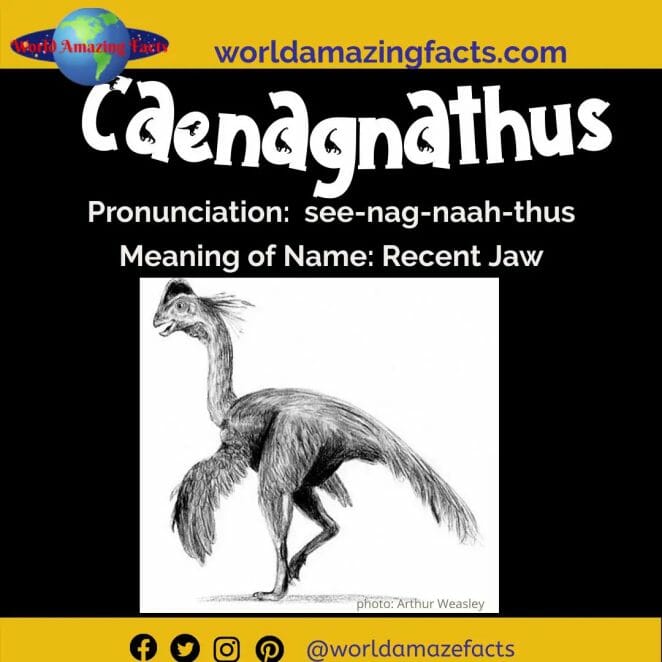 Caenagnathus is a genus of Oviraptorosaurus from Canada’s Late Cretaceous period. The term Caenagnathus originates from the combination of the Greek words keine (“last”, “new”) and ganthos (“jaw”). It alludes to the toothless lower jaw with a fused symphysis, which reminded the author of the names of contemporary birds, therefore the term “new jaw.” The genre designation is a tribute to Dr. WH Collins, the former head of the Geological Survey of Canada. 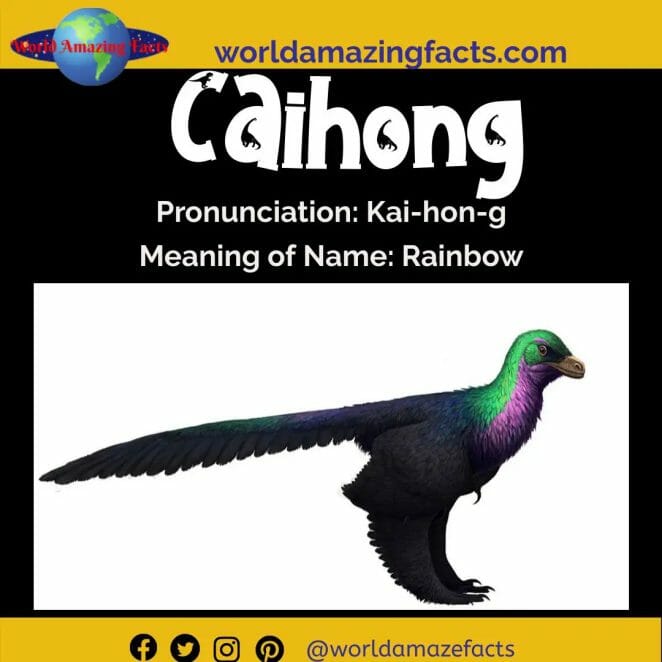 Caihong juji was a tiny, duck-sized carnivorous theropod dinosaur. It had a bony crest on its head and feathers that resembled ribbons. The literal meaning of the generic name is “rainbow,” which relates to the well-preserved holotype and the spectrum of fresh information we can gain from it. The species name is derived from the Mandarin words “ju” for “big” and “ji” for “comb,” referring to the bone comb on the skull. 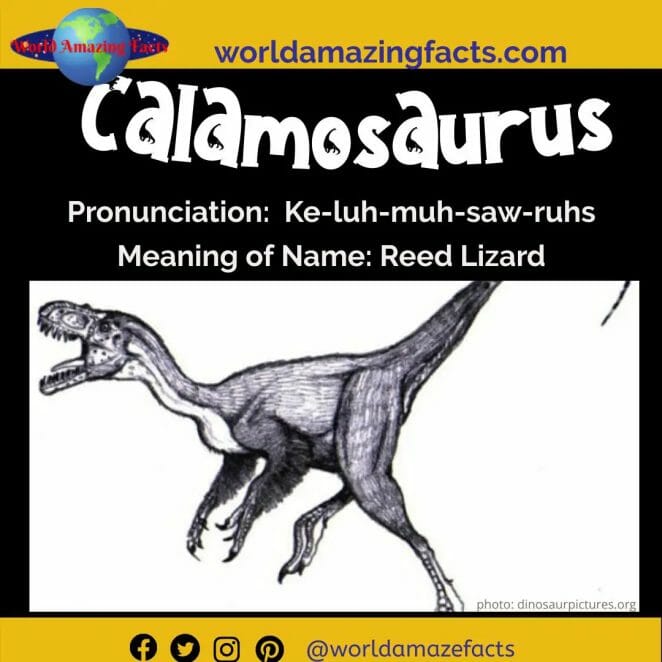 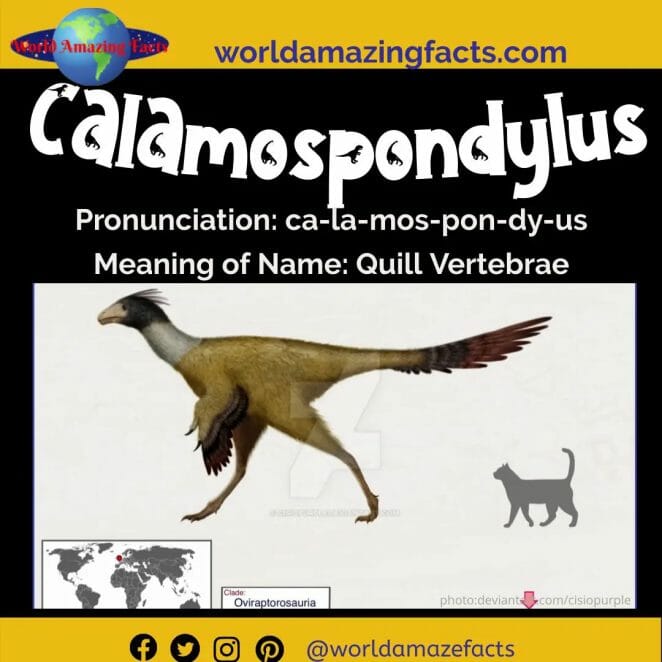 Calamospondylus is a theropod dinosaur genus. It existed during the Early Cretaceous, and fossils of it have been discovered on the Isle of Wight in southern England.
Its name is derived from the Greek words kalamos (“reed”) and spondylos (“vertebra”), which relate to the animal’s slender, delicately constructed vertebrae. 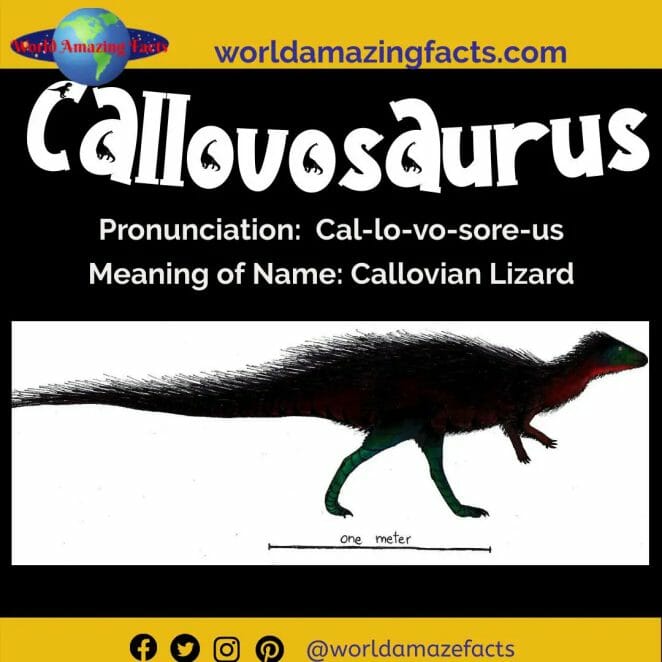 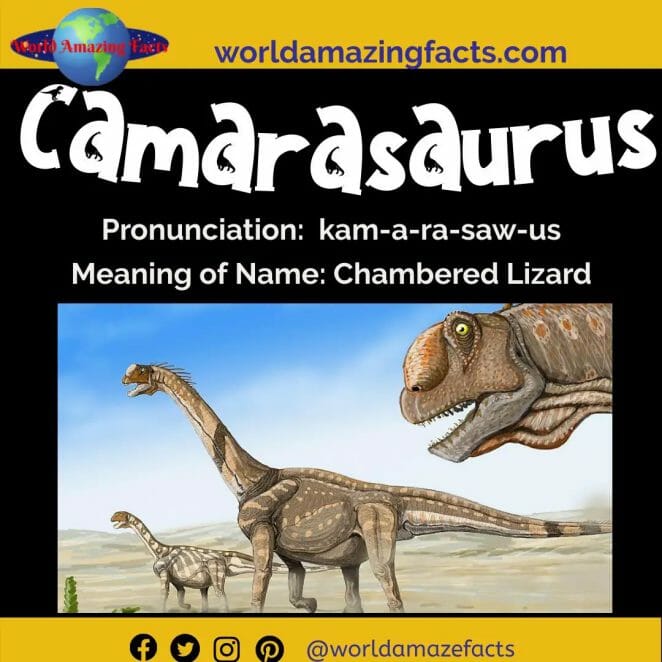 Camarasaurus was a common sauropod in the late Jurassic period. Its abundant fossils have been discovered in the Morrison Formation, which is located in the western United States.
Lapparent and Zbyszewski described Camarasaurus alenquerensis, which means “Alenquer chamber lizard.” The town is in the Portuguese region of Extremadura. 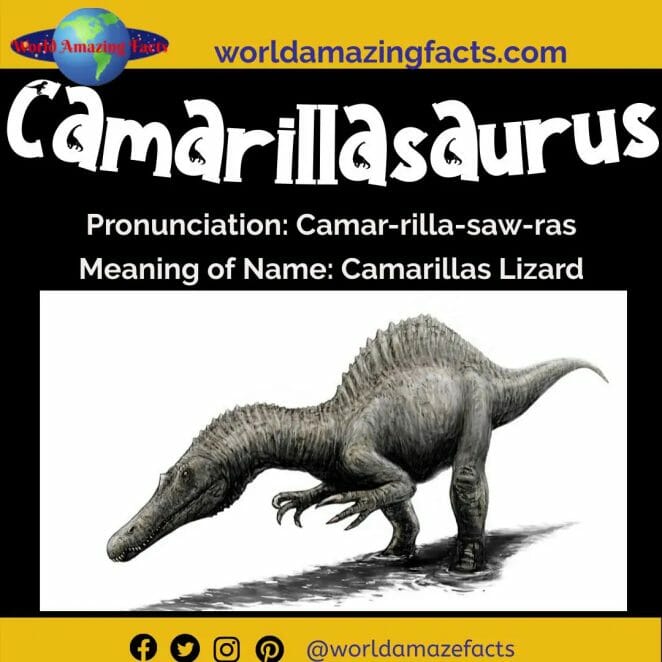 Camarillasaurus is a poorly understood theropod whose bones were discovered in Spain. Because of the fragmentary nature of the specimen, its systematic position is unknown, however it appears to be a spinosaurid.

Bárbara Sánchez-Hernández and Michael Benton, palaeontologists, named and described it in 2014. Camarillasaurus gets its name from the Camarilla rock formation and the Greek word sauros, which means “reptile” or “lizard.” Cirugedae is named for the discoverer of theropod bones, Pedro Cirugeda Buja. 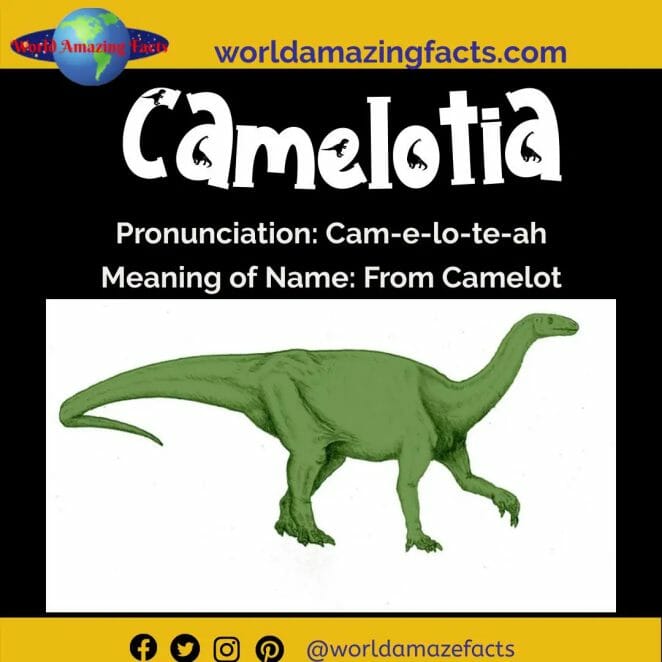 Camelotia is a big, little-known sauropodomorph that lives in modern-day England. Camelotia lived in these areas during the Late Triassic or Early Jurassic periods.

Camelotia derives its generic name from the mythical Camelot castle of King Arthur and the Knights of the Round Table. Legend has it that it was discovered at the site where the fossils of this sauropodomorph were discovered. 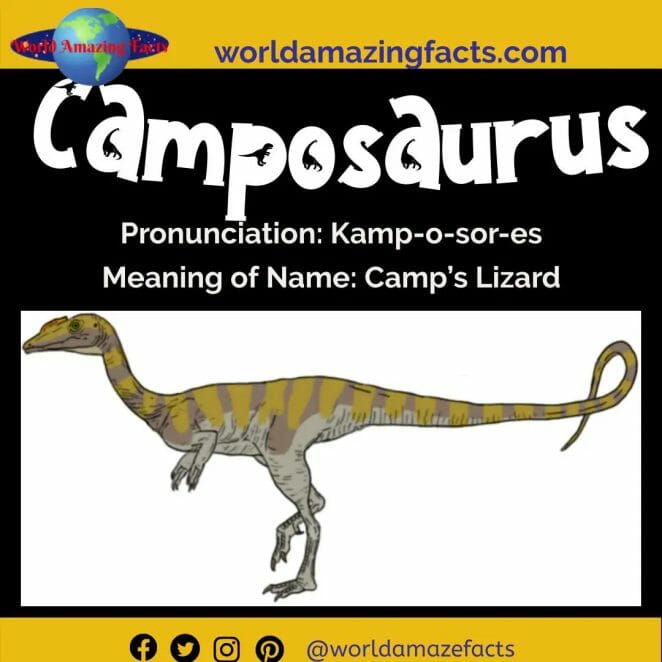 Camposaurus is one of the oldest neoteropods that lived in what is now North America during the Late Triassic period. Camposaurus skeletons were discovered near St. Johns at the Placerias Quarry.

Camposaurus is named after Charles Lewis Camp (1893-1975), a vertebrate palaeontologist best recognised for discovering Placerias dicynodont remnants. The species name (arizonensis) derives from the state of Arizona in the United States, where camposaurus fossils were discovered. 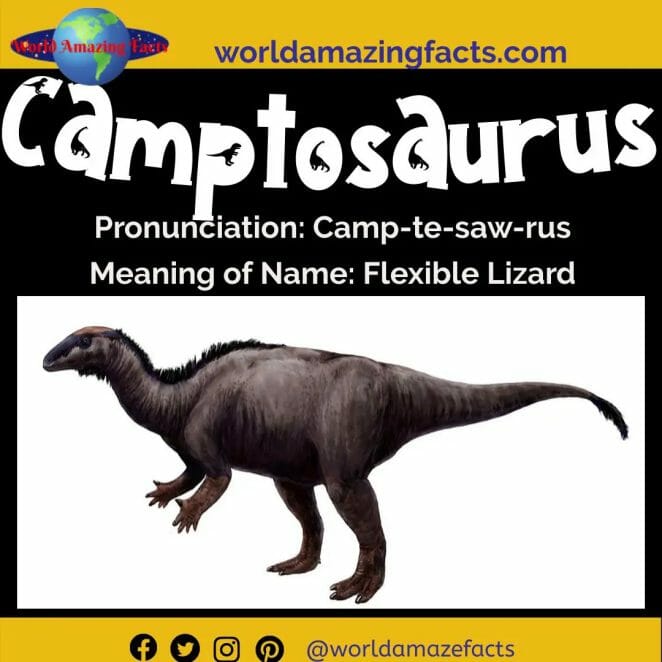 Camptosaurus is a kind of iguanodont that lived in what is now North America during the late Jurassic period. It has a complex taxonomic history. A plethora of species have been ascribed to it throughout the years, but most of them have since been synonymized with the typical species or placed in separate genera.

The generic name Camptosaurus means “flexible lizard” and relates to this dinosaur’s purportedly detached sacral vertebrae, which could be related to the young age of the specimen analysed. Camptos (“lithe”, “flexible”) and sauros are Greek terms (“lizard”, “reptile”). 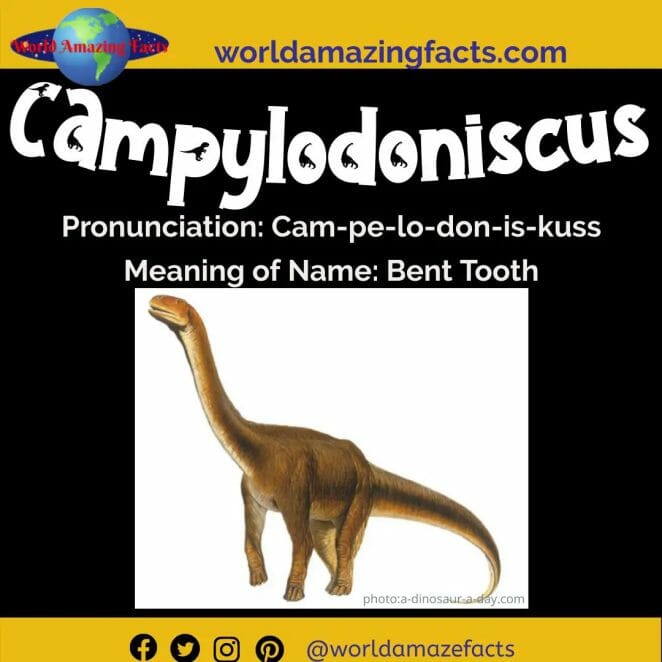 The genus name meaning “bent tooth” is derived from the Greek words for “bent” or “curved” (as in a bow) and “tooth.” Florentino Ameghino is honoured with the specific name. 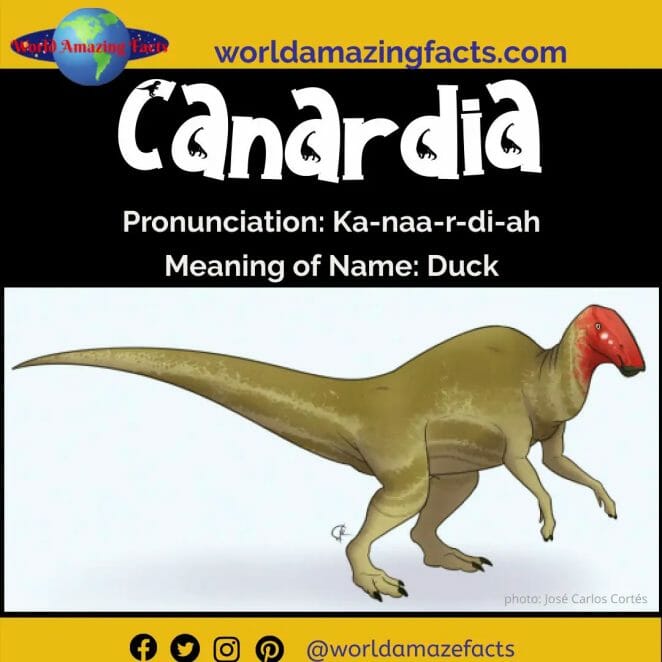 Canardia is a type of herbivorous dinosaur from the Lambeosaurinae group that lived in what is now France during the late Cretaceous period. A group of scientists led by Albert Prieto-Márquez named and described Canardia in 2013.

Canardia is derived from the French word canard, which means “duck.” This is a reference to the Hadrosauridae family, also known as “duck-billed dinosaurs” because to the distinctive shape of their beaks. The term “genre” comes from the southern French region of Upper Garonne. 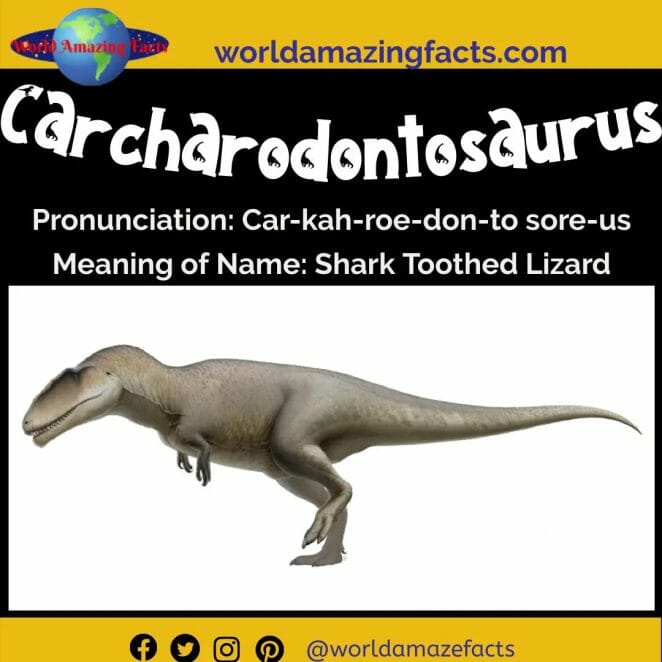 Theropod Carcharodontosaurus was a massive predatory theropod. It was one of the world’s largest terrestrial predators, reaching sizes equal to Tyrannosaurus or its related Giganotosaurus. Carcharodontosaurus existed in what is now North Africa throughout the early and late Cretaceous periods. Despite being discovered and described during the interwar period, Carcharodontosaurus remains a relatively unknown animal to this day.

The name Carcharodontosaurus means “sharktooth lizard” and alludes to the shape of its teeth, which resembled the teeth of a great white shark to the creator of the term ( Carcharodon carharias ). Carcharodontosaurus teeth, like those of the great majority of theropods, are proportionately longer and narrower than shark teeth. The species name saharicus relates to the Sahara Desert, where the animal’s remains were discovered. 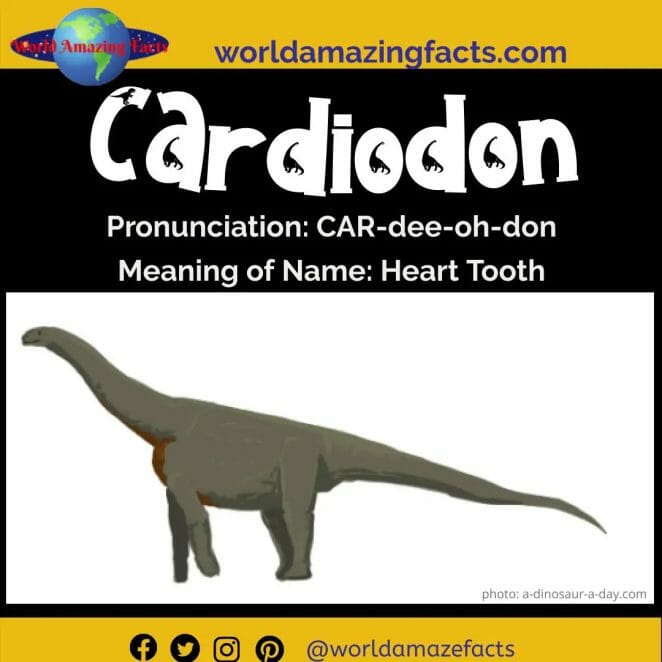 Cardiodon is a Middle Jurassic sauropod with scant tooth material that has been described. It is a previously named sauropod that was described in the same year (also by Sir Richard Owen) as Cetiosaurus, but in a different book.

However, because it had previously been given both a generic and species name, the latter is more commonly regarded as the first formally recognised sauropod. ” Rutellum ” was previously described, but it is a non-scientific name (given “before Linnaeus “), thus the latter is ignored entirely. Owen referred to it as a sauropod “heart tooth” because of the tooth form (Latin cor – heart; odon – tooth). 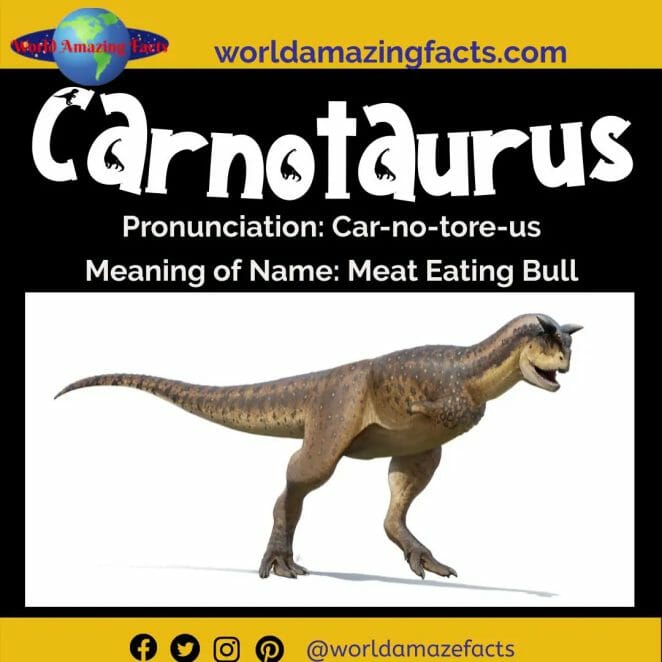 Carnotaurus is a huge, sophisticated Abelisaurid from the late Cretaceous period of South America. Carnotaurus was one of the group’s last representatives.

It is the “flagship taxon” of the Abelisauridae, which remained the best known until the description (although – except for Majungasaurus – very briefly) of its more complete cousins at the beginning of the twenty-first century. Its distinctive look (perhaps in conjunction with a well-chosen name) has made it one of the more well-known dinosaurs.

Carnotaurus derives its name from the Latin words carn – (meat) and taurus (bull) (bull). The genre name was given in honour of the landowner (Estancia Pocho Sastre) who discovered the holotype – Angel Sastre and his son, Anselmo (Pocho) – the Sastre family also assisted in the excavations. 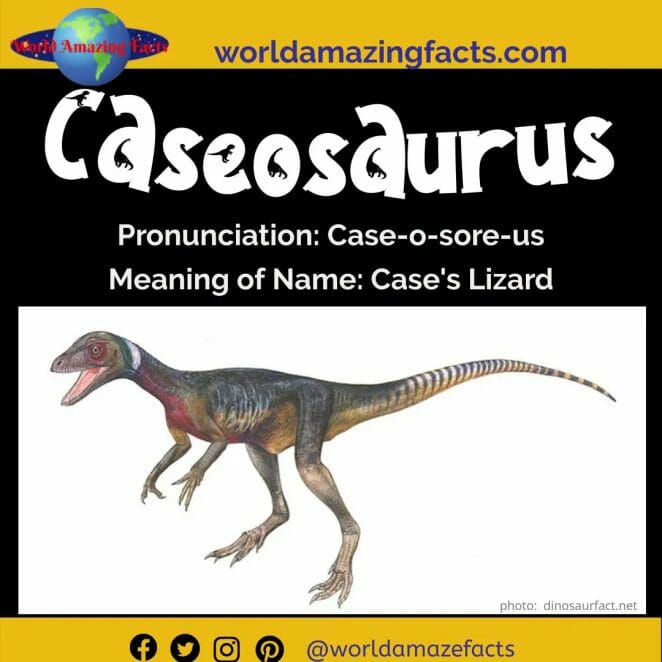 Caseosaurus is a questionable genus of saurischian dinosaurs that existed in Texas, North America, during the late Triassic Period.

The dinosaur was named for Ermine Cowles Case, its discoverer. In Greek, the suffix ‘-saurus’ means ‘lizard’. The species name C. crosbyensis was taken from Crosby County, where the fossils were discovered. Caseosaurus crosbyensis was given its official name by a group of scientists in 1998. 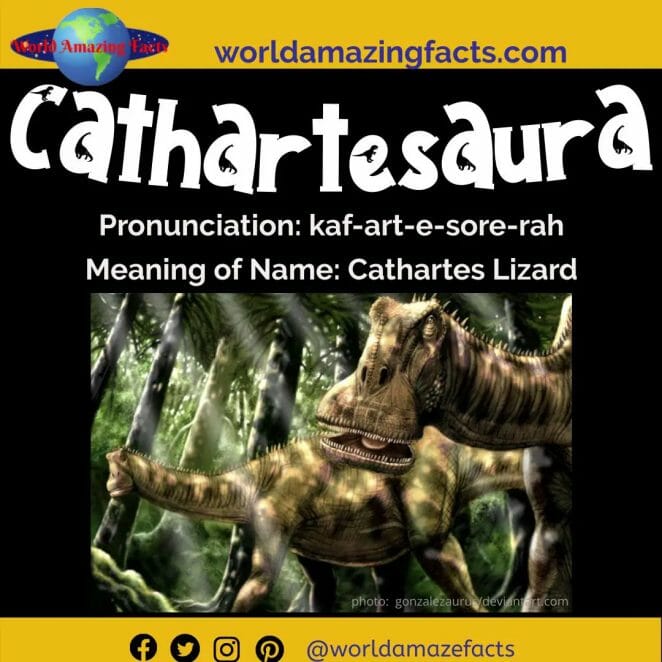 Cathartesaura is a mixture of two words: Cathartes (a genus of condor birds native to the Americas) and the Greek group saura (the feminine form of the Greek sauros), which means “lizard.” The anaerobic species’ name was chosen to thank the Argentine corporation ANAEROBICOS SA, which provided funding for the excavations. 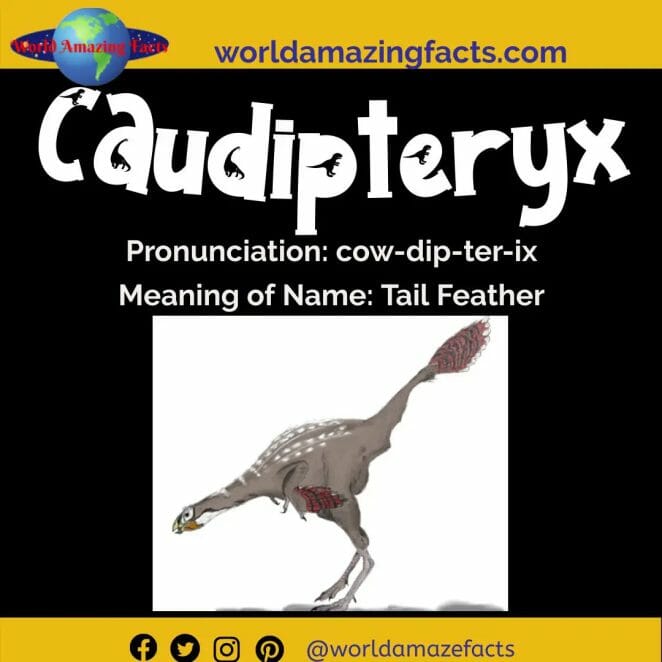 Caudipteryx is a tiny, somewhat feathered theropod that lived in early Cretaceous China. Despite the discovery of multiple well-preserved specimens, the evolutionary position of this species is unknown.

Caudipteryx could be a bird, an oviraptorosaurus (or both), or a more primitive dinosaur, according to several analyses. The discovery of Caudipteryx sparked a vigorous debate concerning the link between birds and dinosaurs.

Caudipteryx is derived from the Latin cauda (“tail”) and the Greek pteryx (“wing”, “feather”). It references to feathering evidence observed on this animal’s tail, among other places. The zoui genre is named after Zou Jiahua, China’s deputy prime minister who helped with the Liaoning excavations.