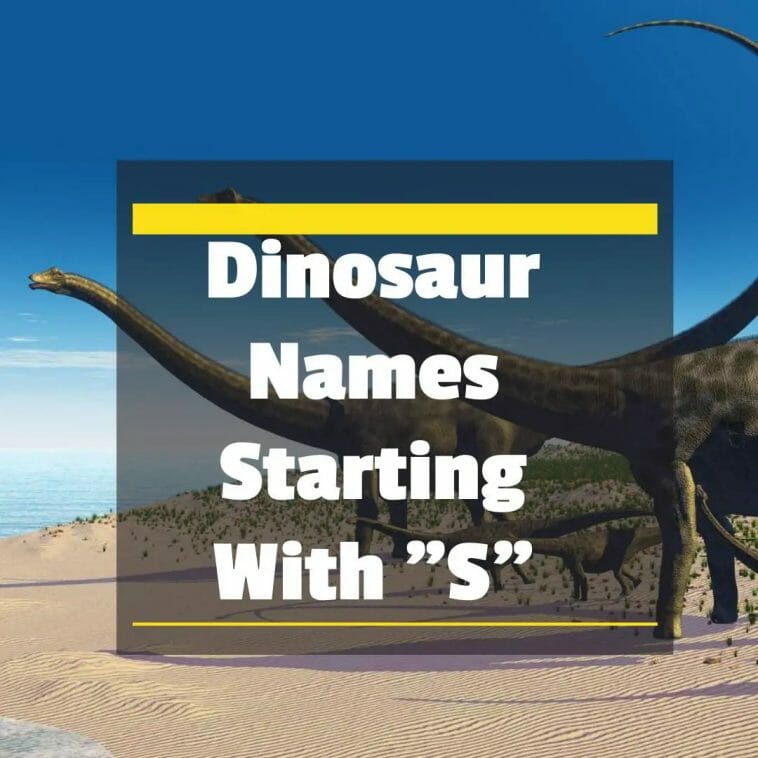 Check out the alphabetical list of dinosaur names beginning with the letter “S”. We’ll look at dinosaur pictures and discuss what their names mean, as well as learn more about dinosaur facts.

Dinosaurs with names that begin with the letter “S”

Contents for Dinosaur Names that Start with “S” 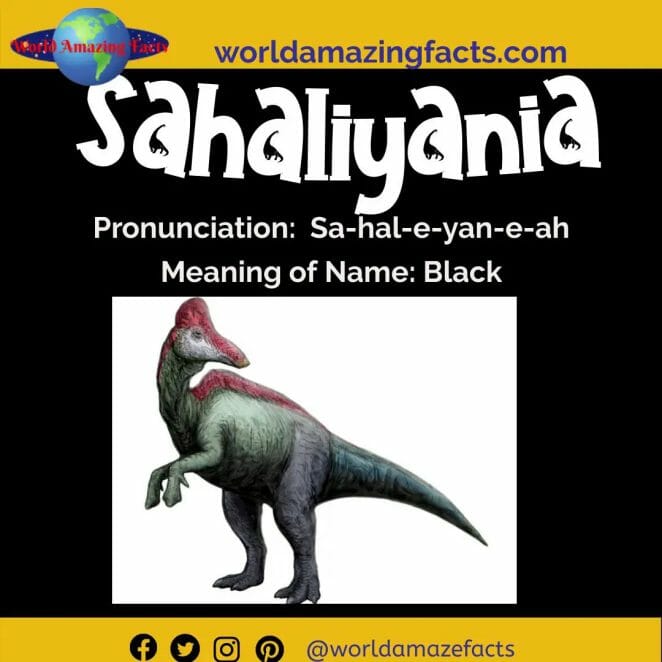 Sahaliyania is a kind of hadrosaurid that lived in what is now Northeast China during the Late Cretaceous period.

Sahaliyan means “black” in Manchurian and relates to the Amur River (“Black River”), which was discovered near the remains of Sahalijania. The Orokas, the Tungus people of Heilongjiang Province and the Inner Mongolia Autonomous Region, are honoured by the genre name. 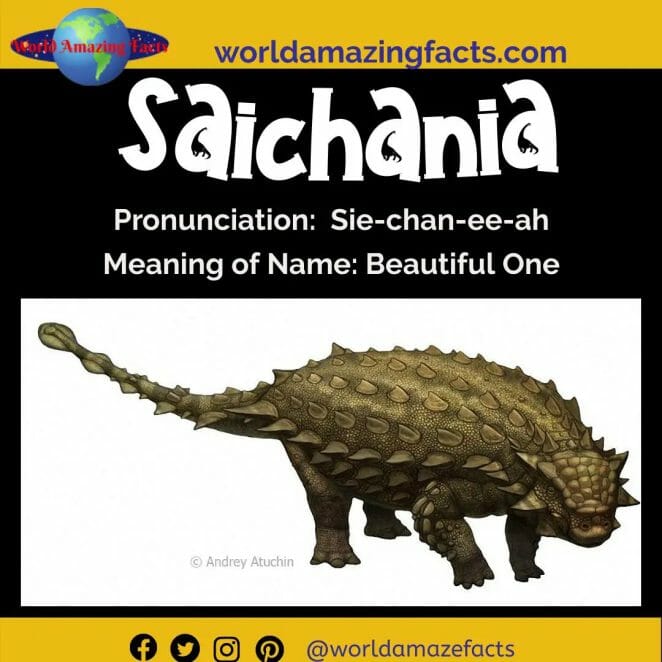 Saichania is a Mongolian ankylosaurid that is medium-sized but enormously constructed.

The generic name is derived from the Mongolian word “saichan,” which means “beautiful.” The species name refers to the location of the holotype discovery, Khulsan in the Gobi Desert. 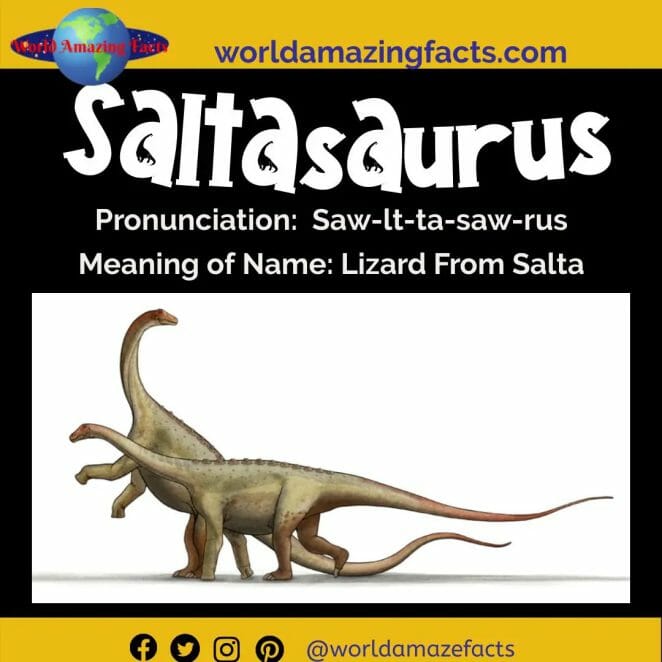 Saltasaurus is a tiny late Cretaceous titanosaur found in what is now northwestern Argentina.

The generic name Saltasaurus is derived from the location where the typical species S. loricatus was discovered. It literally translates as “Salta Lizard.” 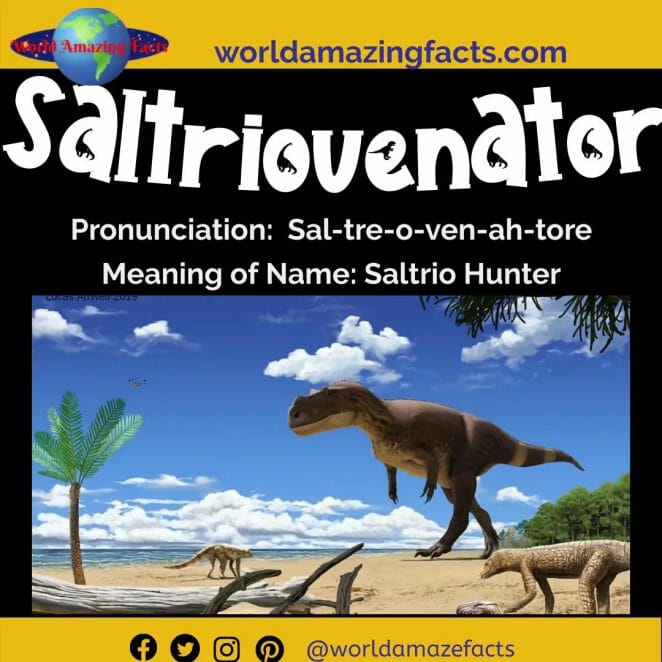 Saltriovenator is a theropod from the Early Jurassic period of modern-day Italy. It was most likely the earliest Ceratosaurus and the largest theropod in the Early Jurassic. Despite the scarcity of the fossil material, its discovery is critical for understanding the evolution of the tetanur palm.

The name Saltriovenator is derived from the village of Saltrio, where its bones were discovered, and the Latin word venator, which means “hunters” or “hunter.” Angelo Zanella, the discoverer of the bone, is honoured with the species name zanellai. 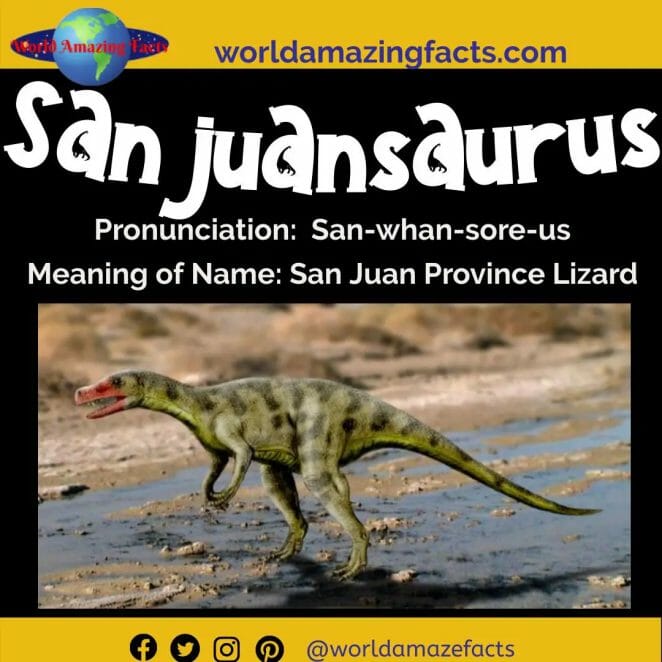 Sanjuansaurus is a kind of reptile dinosaur from the Herrerasauridae group that lived in current South America during the late Triassic period.

Sanjuansaurus derives its name from the region of San Juan and the Latinized Greek word sauros, which means “lizard.” The conventional species name, gordilloi, honours Raul Gordillo, a fossilizer and artist who has been active in excavations in the area for many years. 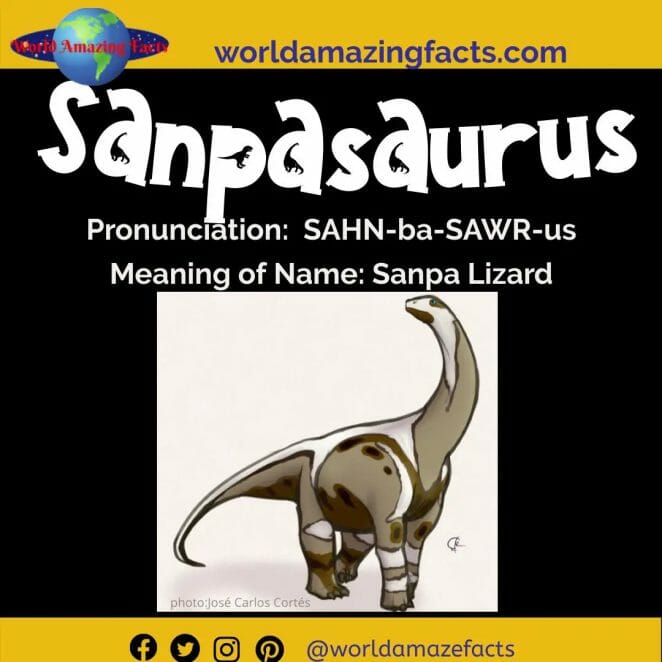 Sanpasaurus (Latin Sanpasaurus yaoi) was a primitive sauropod that lived between 183 and 174 million years ago in what is now China.

Sanpasaurus yaoi is a reference to the old name of the province of Sichuan as well as the discoverer of the dinosaur’s bones. Young named Sanpasaurus in 1946. S. yaoi is the type species. Its classification is uncertain, and it belongs to a dubious genus. 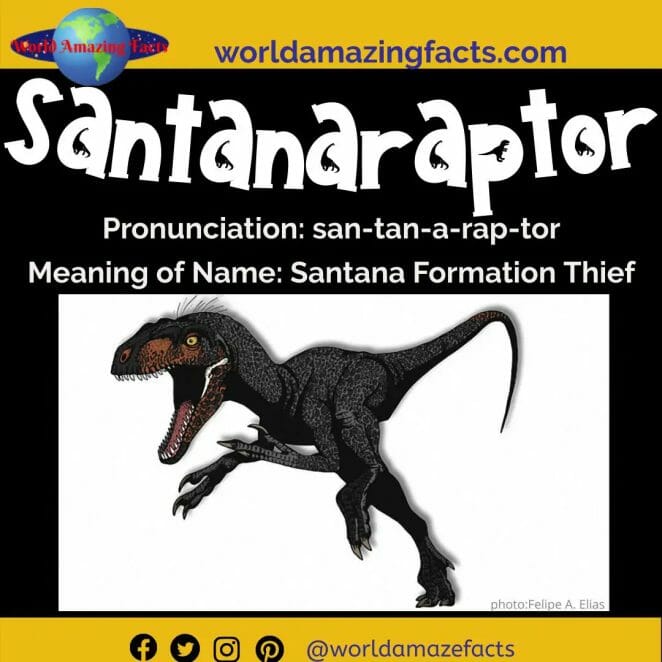 The fossilised remains of this little predatory dinosaur were described in the literature for the first time in 1996. It was a youthful specimen in comparison to the Ornitholestes genus. It is significant because the soft sections of the body’s impressions – muscles and epidermis – have been preserved.

Santanaraptor placidus translates as “Santana robber Placido.” Santana is the name of the formation where the remains were discovered, and Placido is the name of Placido Cidade Nuvensa, the founder of the Museum at Santana do Cariri. 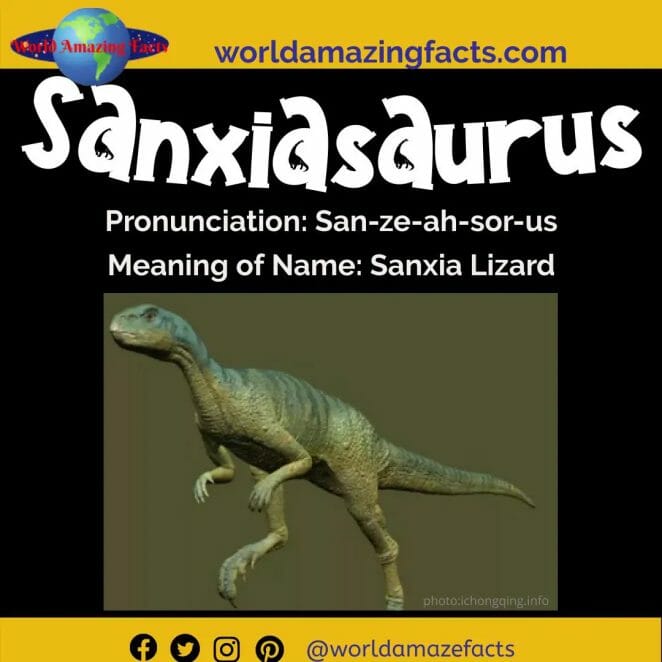 Sanxiasaurus is a small pelvic-bird dinosaur that lived in today’s China during the Middle Jurassic period. A team of scientists lead by Ning Li named it in 2019. It is Asia’s first known Neornithischia representative.

Sanxiasaurus gets its name from the Chinese word Sanxia, which means the Three Gorges Dam on the Yangtze River. 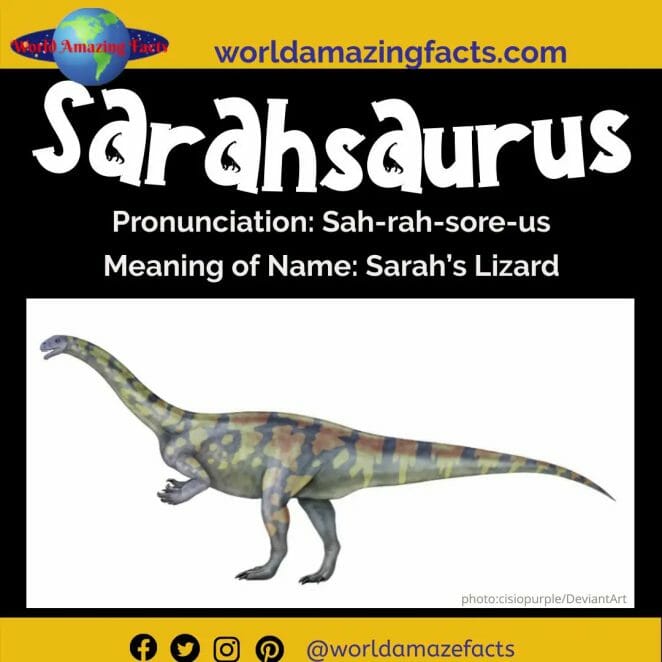 Sarahsaurus is a kind of Early Jurassic reptile dinosaur that lives in Arizona in the United States today.

Sarah Butler, who made contributions to science, medicine, and the arts in Texas, inspired the first component of the generic name Sarahsaurus. The second element (Greek sauros) means “lizard,” hence the generic name is “Sarah lizard.” The species name aurifontanalis is derived from Latin. The holotype was discovered in Gold Spring, Arizona, at aurum (golden) + Latin fontanalis (source). 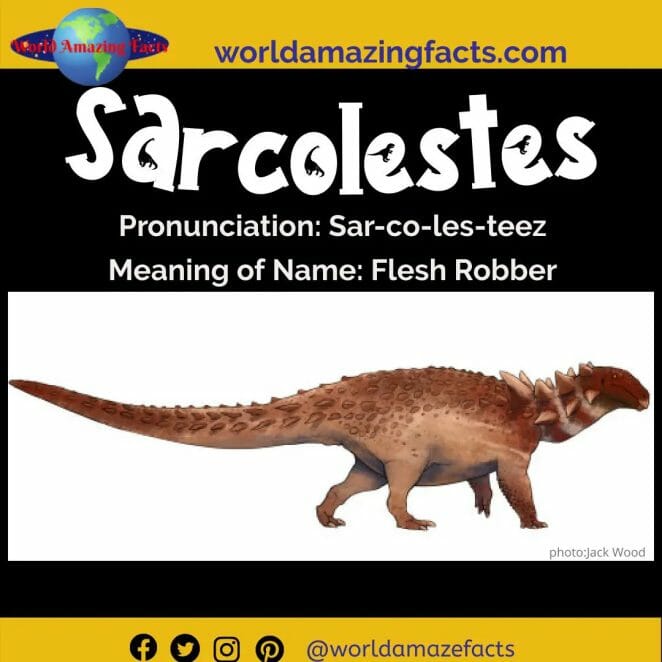 Sarcolestes is one of the most ancient ankylosaurs known. Sarcolestes lived during the Middle Jurassic period in what is now England. The thick-vaulted cranium of Sarcolestes mimics that of pachycephalosaurs, lending credence to the theory that the sarco-colest could employ it for intraspecific conflict.

Sarcolestes’ generic name means “meat robber,” and it derives from the fact that a part of his jaw was previously categorised as belonging to a theropod. The second half of the name leedsi is most likely a tribute to Alfred Leeds, who conducted extensive excavations towards the end of the nineteenth century. 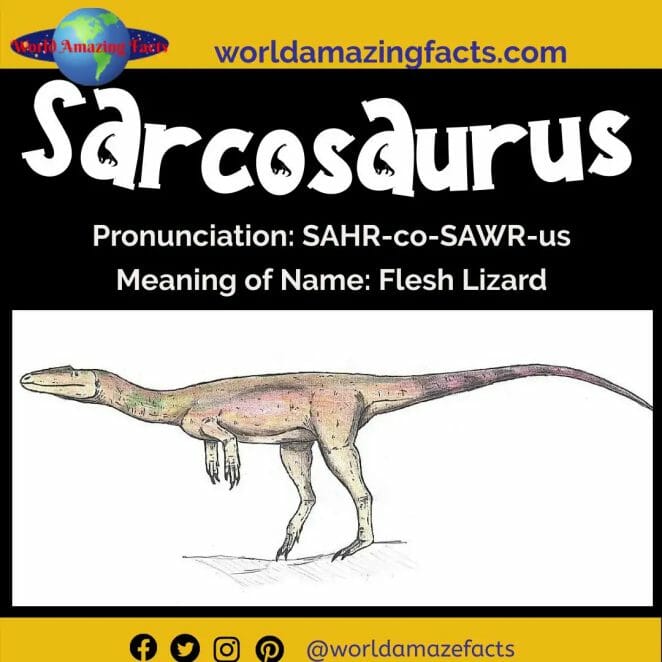 Sarcosaurus was a primitive theropod that lived in what is now England. The generic name is derived from the Greek word sarx, which means “flesh.” The specific name is in honour of Wood. 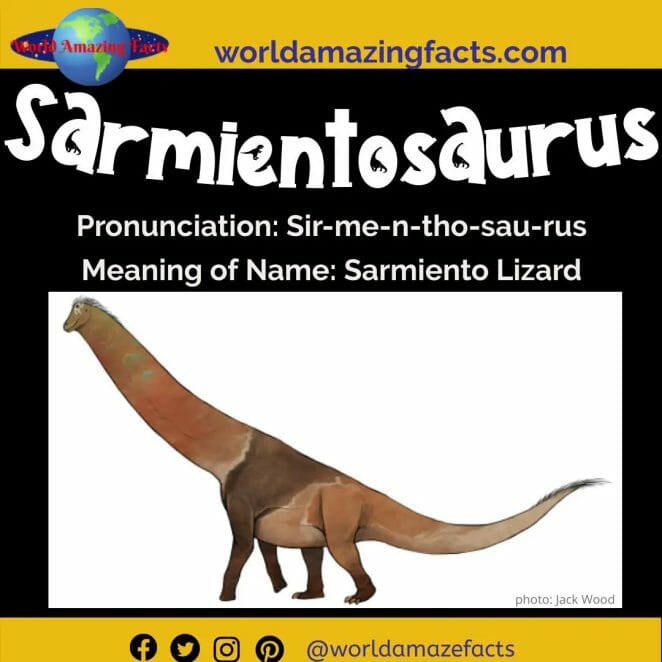 This sauropoda’s generic name translates to “Sarmiento Lizard,” after the city and department where its fossils were discovered. The second component of the scientific name, known as the genre epithet, is dedicated to Dr. Eduard Musacchio. 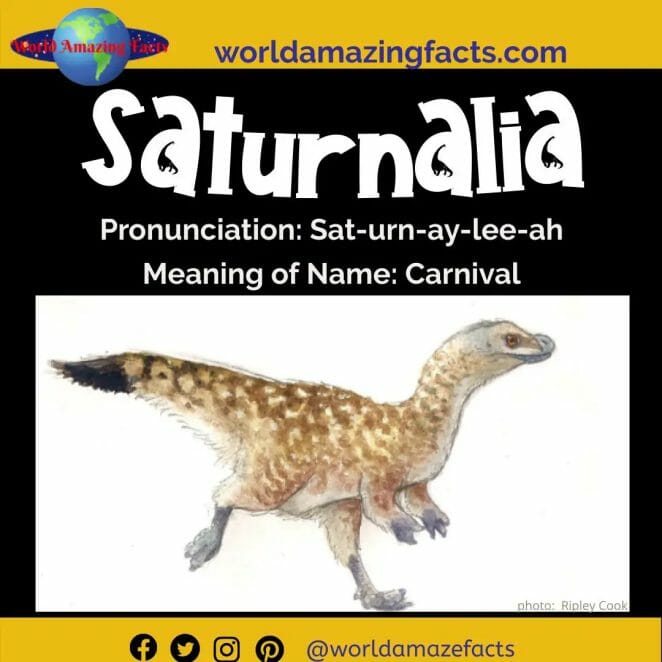 Saturnalia tupiniquim is a species of early, primitive prosauropod discovered in Brazil (the entry assumes all non-sauropods sauropodomorphs). Max Langer and his colleagues called Saturnalia in 1999.

Saturnalia refers to the ancient ceremonies, known as saturnalia, on which paratype specimens were discovered. Tupiniquim, on the other hand, is a Portuguese word derived from Guarani, Brazil’s native language. It is a delightful way of referring to Brazilian natives. 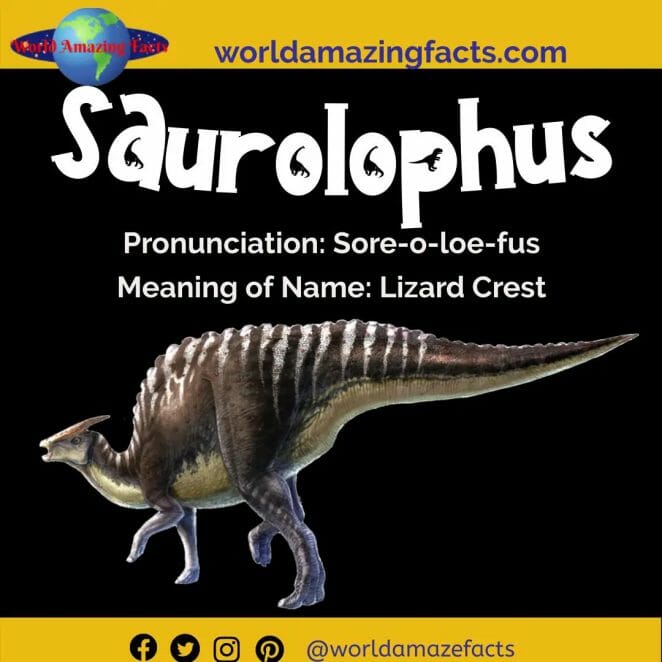 Saurolophus is a late Cretaceous, widespread hadrosaurid genus with abundant remnants found in North America and Asia. This herbivorous dinosaur was identified by a distinctive skull appendage generated by the expansion of the nasal bone all the way to the edge of the skull. 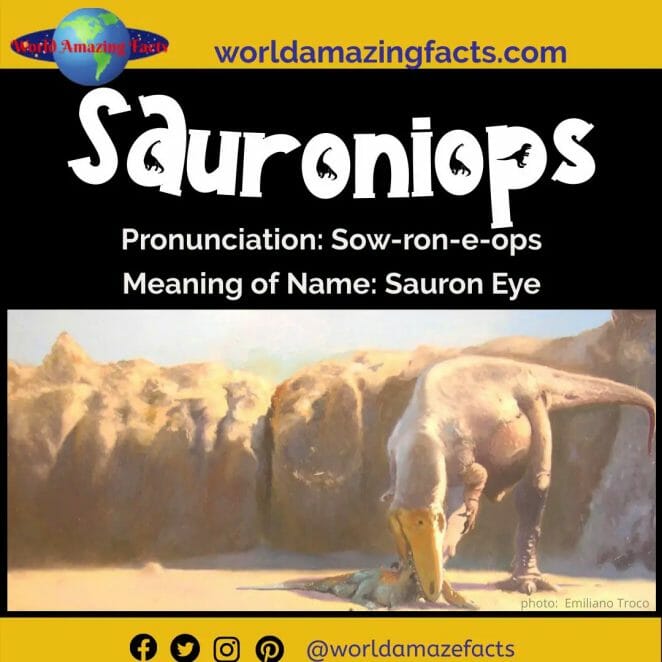 Sauroniops is a kind of theropod discovered in African Cretaceous deposits and formally named in 2012 in a 2013 publication.

Sauroniops pachytholus, whose general name relates to Sauron’s eye in JRR Tolkien’s epic classic The Lord of the Rings, and the genre term to the distinctive thick dome produced by the frontal bones on the sauroniops skull. 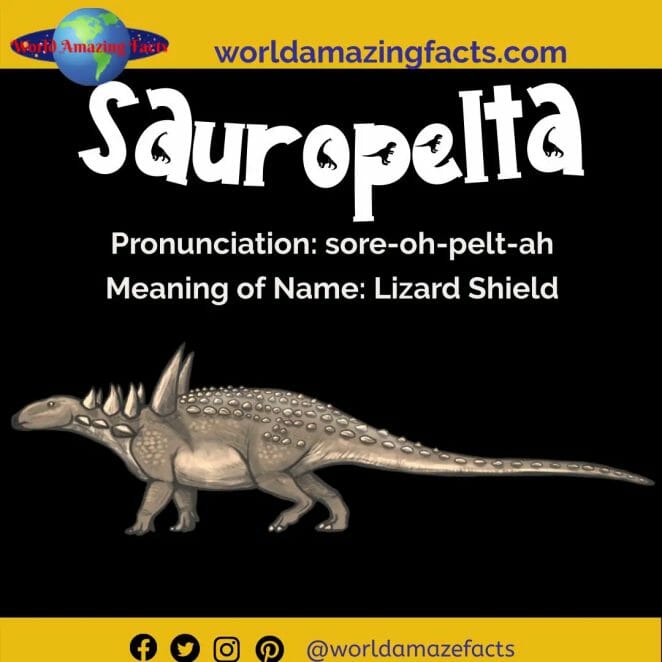 Sauropelta was a Nodosaurid that lived in North America during the Early Cretaceous period. It is both one of the most researched and one of the earliest known members of this group. The sharp spikes protruding from the neck and shoulders were the most distinguishing feature of this armoured dinosaur. 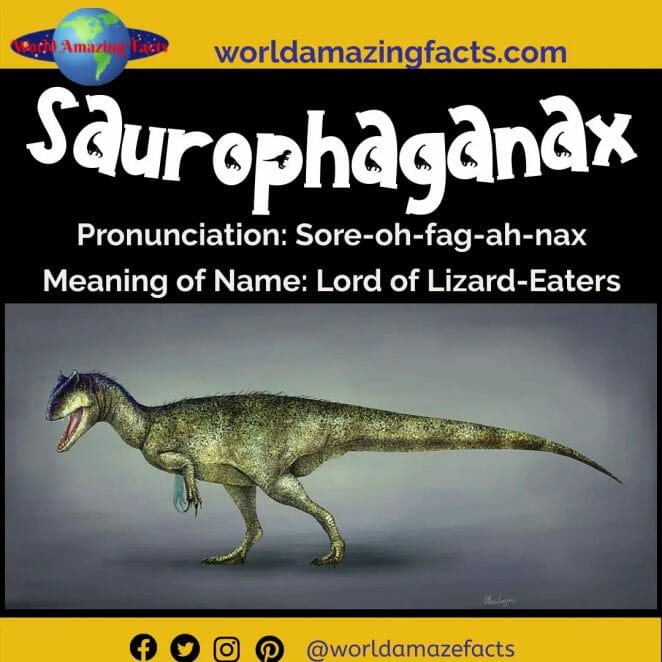 The Saurophaganax is a relatively unknown big late Jurassic theropod of North America. It is mostly known from extracranial material. It was once thought to be a species of Allosaurus, but today it is thought to be a distinct genus. Saurophaganax fossils are found in the well-known Morrison Formation. It was a huge Jurassic predator, alongside Yangchuanosaurus and Torvosaurus.

The name Saurophaganax is derived from the Greek words saurophagos, which means “reptile eater,” and anax (“king”). The entire phrase is thus translated as “the king of reptile eaters.” The species name (maximus) means “the greatest” and relates to theropod size. 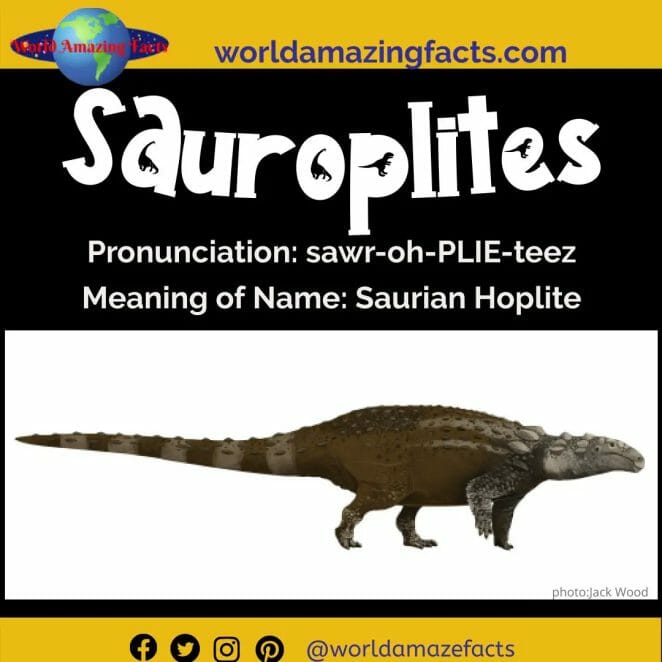 Sauroplites (“reptilian hoplite” or “hoplite lizard”) are a fragile ankylosaurus genus that existed in present-day China during the Early Cretaceous epoch.

Bohlin identified and described the type species, Sauroplites scutiger, in 1953. The generic name is derived from the Greek words sauros or saura, which mean “lizard,” and hoplites, which means “hoplite, armed foot soldier.” In reference to the body armour, the specific name is new Latin for “shield bearer.”