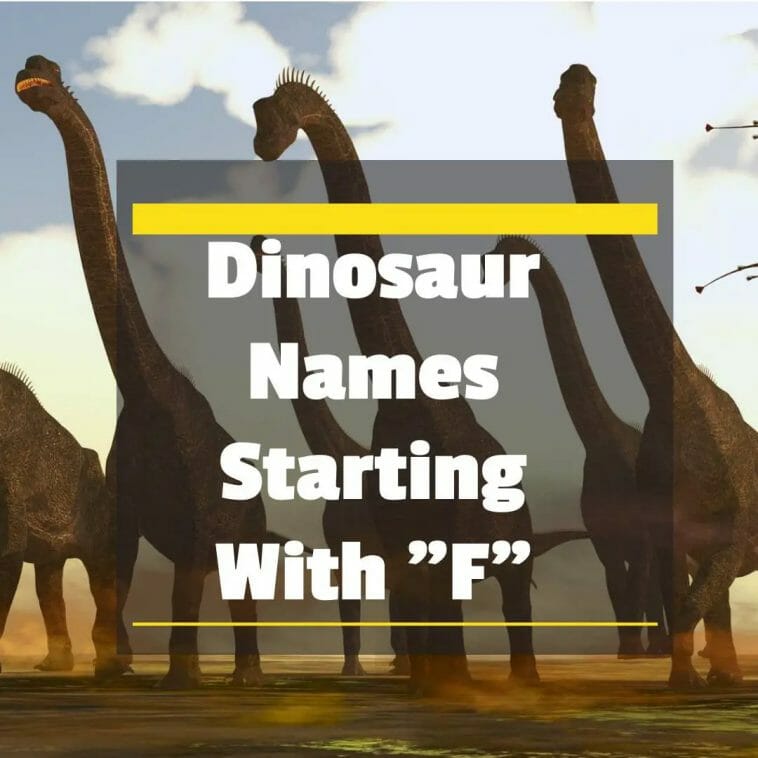 Check out the alphabetical list of dinosaur names beginning with the letter “F”. We’ll look at dinosaur pictures and discuss what their names mean, as well as learn more about dinosaur facts.

Dinosaurs with names that begin with the letter “F”

Contents for Dinosaur Names that Start with “F” 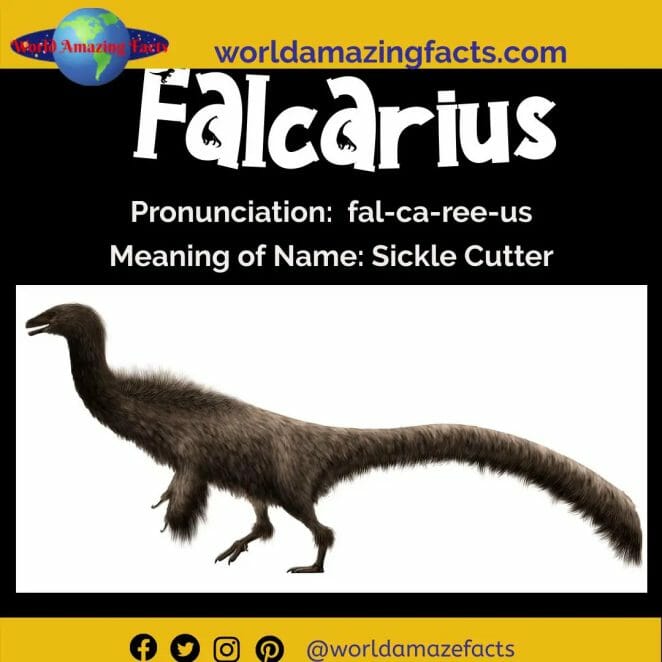 Falcarius is a species of medium-sized, somewhat lightweight Celurosaurus, a primitive member of a peculiar group of therizinosaurs. Unlike most theropods, it was likely a herbivore and not an active predator. Falcarius lived in the United States during the early Cretaceous period. 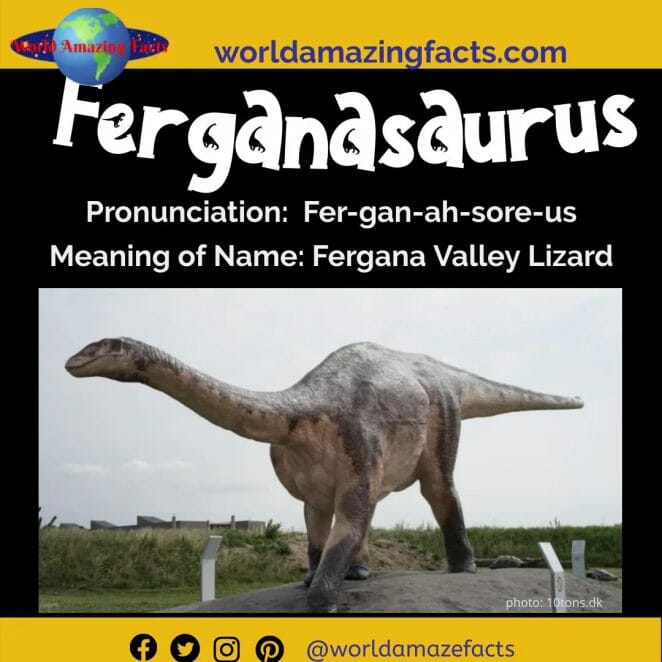 Ferganasaurus is a genus of medium-sized sauropods of dubious taxonomic position that existed in what is now Kyrgyzstan during the Middle Jurassic.

Ferganasaurus is named after the Fergana Valley in Kyrgyzstan. The second component of the name is derived from the Greek sauros (“reptile”, “lizard”). The genre epithet commemorates professor Nikita Verzilin, the discoverer of the holotype. 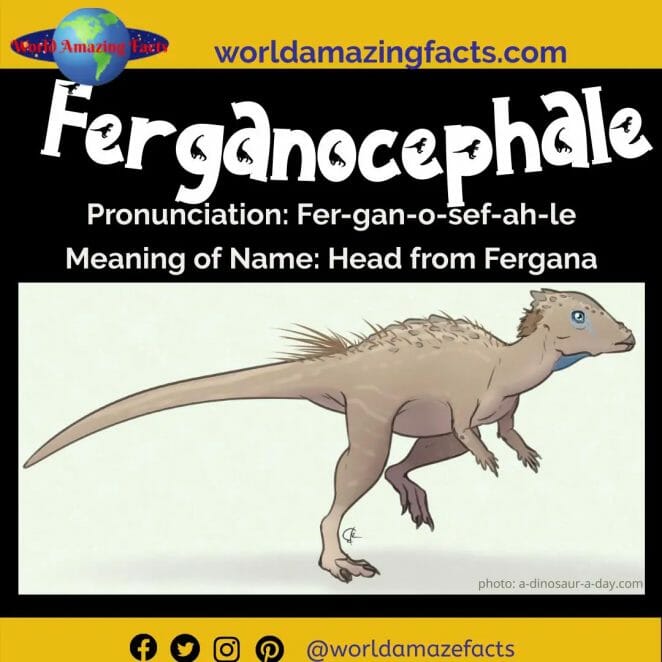 Ferganocephale is a neornithischian dinosaur genus with a shady history. It came from Kyrgyzstan’s Middle Jurassic Balabansai Svita. The discoverers of Ferganocephale classed it as a pachycephalosaur. Other scientists, such as Robert M. Sullivan, believe the fossil record is insufficient for a precise identification, hence this dinosaur is classified as a nomen dubium. 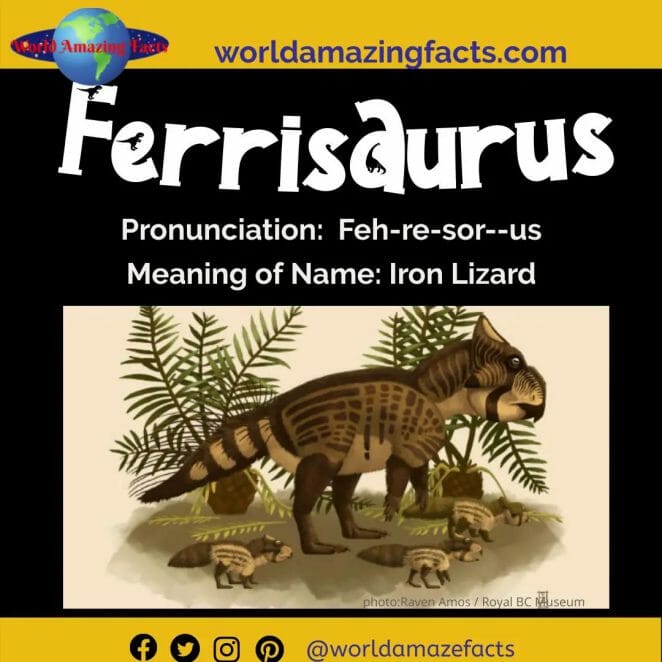 Ferrisaurus is a genus of ceratops from the Leptoceratopsidae family that lived in British Columbia, Canada during the Late Cretaceous period. Victoria Arbor and David Evans named and characterised Ferrisaurus in 2019.

Ferrisaurus derives its name from the Latin ferrum (“iron”) and the Greek sauros, which means “iron lizard” (“reptile”, “lizard”). It references to his remains being discovered near the railway tracks. Sustutensis is the scientific name for the Sustut River and the Sustut Basin. 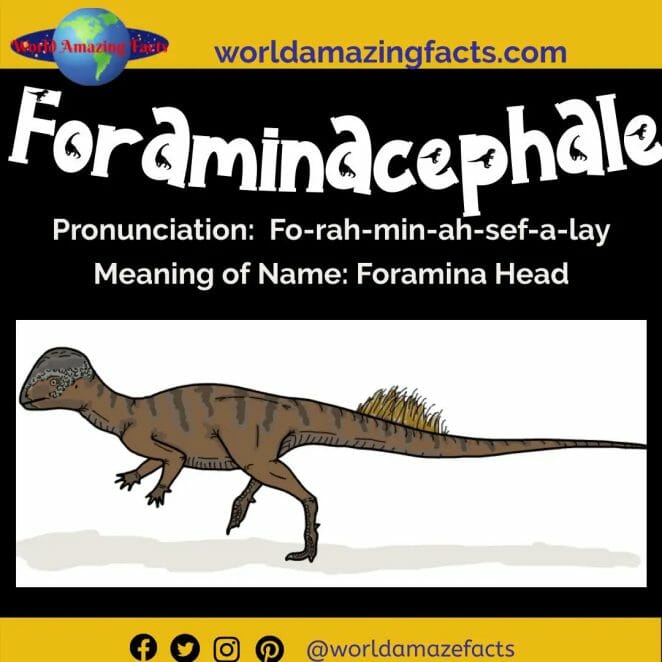 Foraminacephale was a large-headed dinosaur (Pachycephalosauria group) that lived in today’s Canada (Alberta province) during the Late Cretaceous period.

Foraminacephale is a compound of the words formina (Latin foramina meaning hole) and Gr. cephale (head). Thus, it can be interpreted as “orifice head,” and term derives from the fact that the taxon’s skull has several apertures on the dorsal surface. The genre epithet brevis means “small” and most likely relates to the animal’s size. 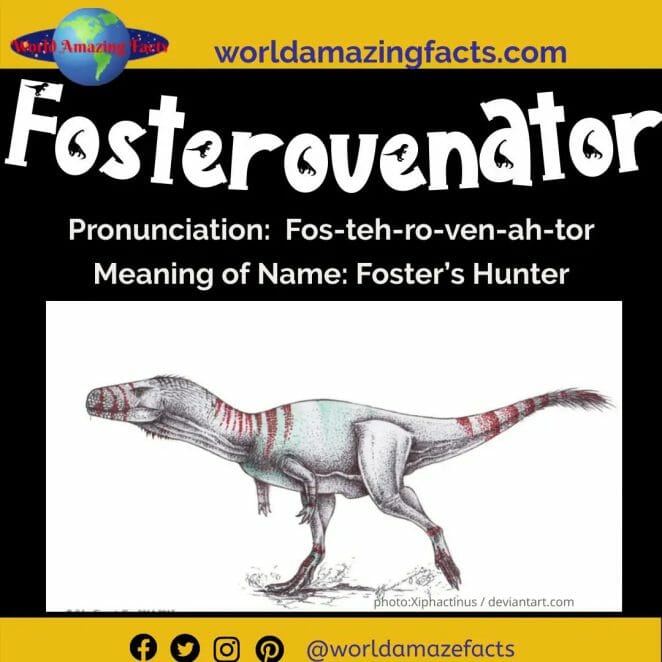 The Fosterovenator is a kind of theropod that lived in the United States during the Late Jurassic period. Fosterovenator bones were uncovered in the famed Morrisson Formation strata. 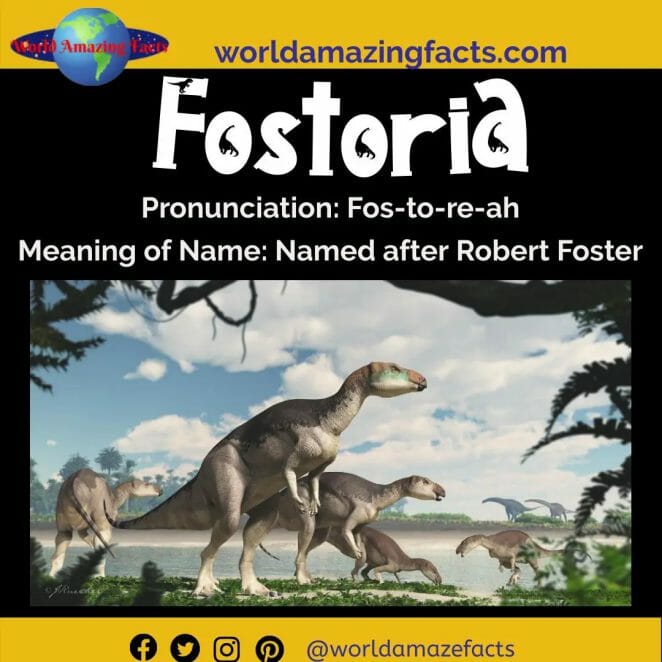 Fostoria was a herbivorous dinosaur that lived in what is now Australia during the early late Cretaceous epoch. A team of palaeontologists led by Phil Bell described it in 2019.

Fostoria is named after Robert Foster, the miner and discoverer of this animal. The genre name is derived from the terms dhimba and ngunmal, which mean “sheep” and “garden” in Australia’s native language, respectively. 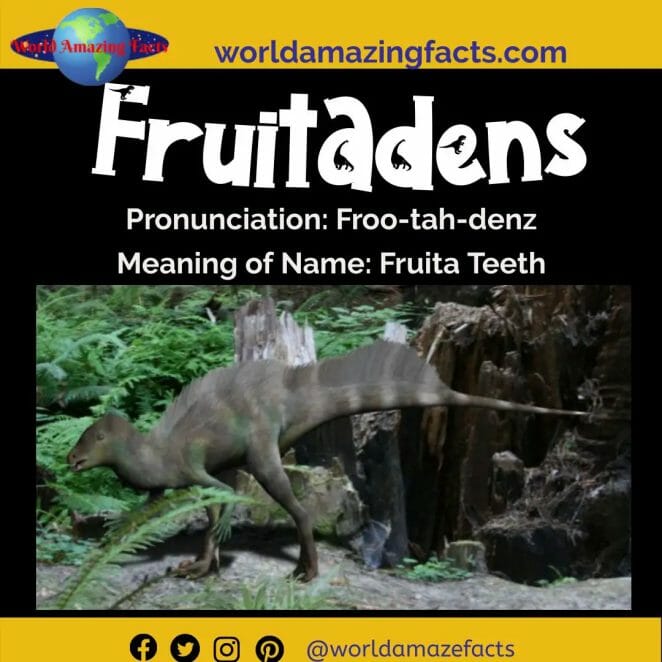 Fruitadens is a Heterodontosauridae genus of tiny pelvic dinosaurs. Fruitadens lived in what is now the United States during the late Jurassic period. Fruitadens bones are found in the famed Morrison Formation.

Fruitadens is named for the village of Fruita, where the remains of Fruitadens were discovered, and the Latin dens (“tooth”). The genre name haagarorum pays tribute to the Haaga family’s contributions to the Los Angeles Museum of Natural History. 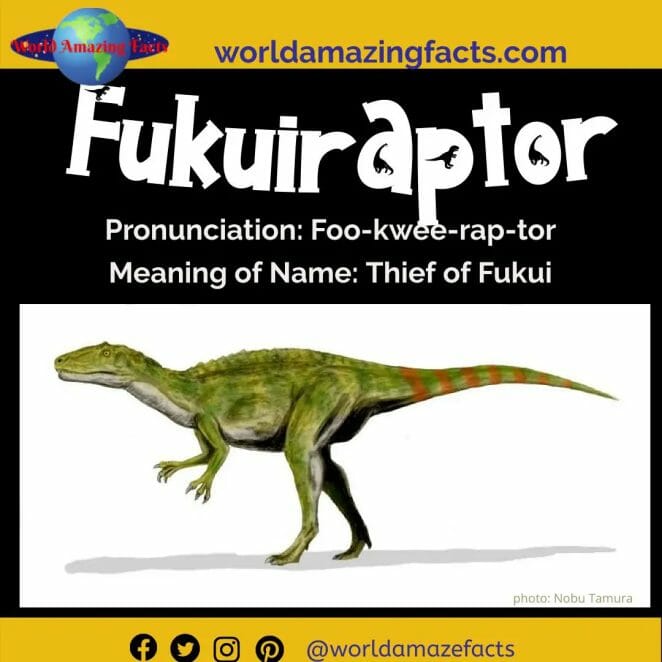 Fukuiraptor is a medium-sized carnivorous theropod from the early Cretaceous period of Japan. It is famous for its many partial remains, including those of multiple people of varying ages.

Fukuiraptor is a combination of the Fukui Prefecture, where the theropod’s remains were discovered, and the Latin word raptor, which means “thief” or “robber.” The latter element is frequently encountered in theropod names from the Megaraptora and Dromaeosauridae groups. The name kitadaniensis is derived from the name of the Kitadani rock formation. 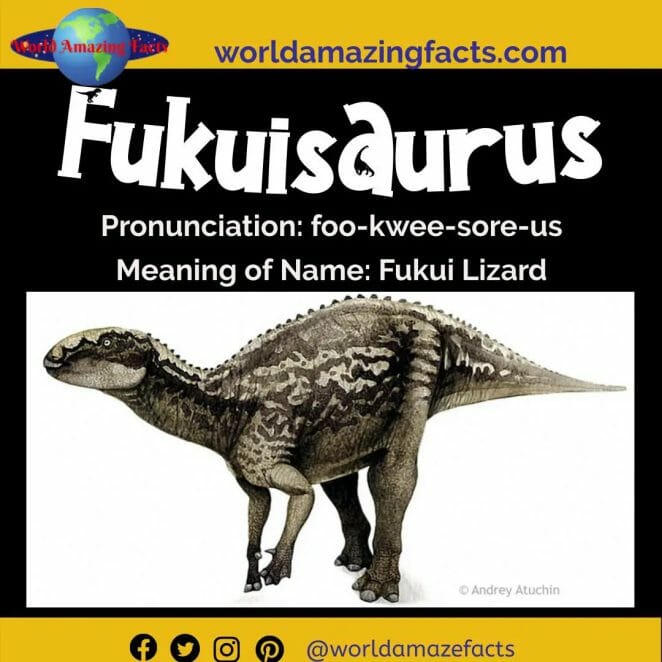 Fukuisaurus was a primitive iguanodont that lived in what is now Japan during the early Cretaceous period. Fukuisaurus fossils were discovered in the Kitadini Formation, which also contains the remains of numerous other dinosaur species, including another iguanodont called Koshisaurus.

The genus name Fukuisaurus is derived from the Fukui Prefecture, where Fukuisaurus fossils were discovered, and the Greek word sauros, which means “lizard.” The species name, tetoriensis, refers to the discovery of fossils in the Tetori group of rocks. 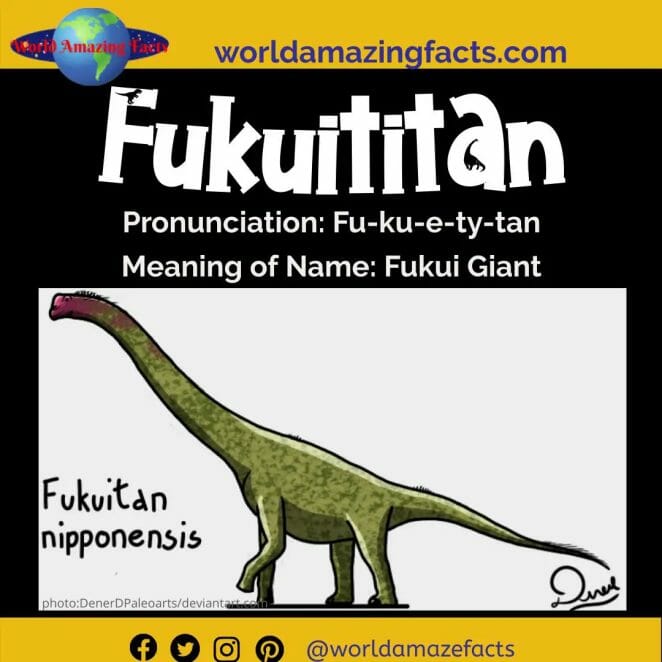 Fukuititan is a sauropod (long-necked dinosaur) that lived in present-day Japan (Honshu Island) during the early Cretaceous period. Fukuititan, like all sauropods, had four legs and a noticeably longer neck than other families of “terrible lizards.”

Fukuititan’s generic name is a mix of the following words:

Fukui is a prefecture and city on the island of Honshu, where the Fukuititan skeleton and Greek gr. titan – meaning mythical giant, giant – are found, and the species epithet nipponensis indicates Japanese. The name means “Japanese Fukui Titan.” 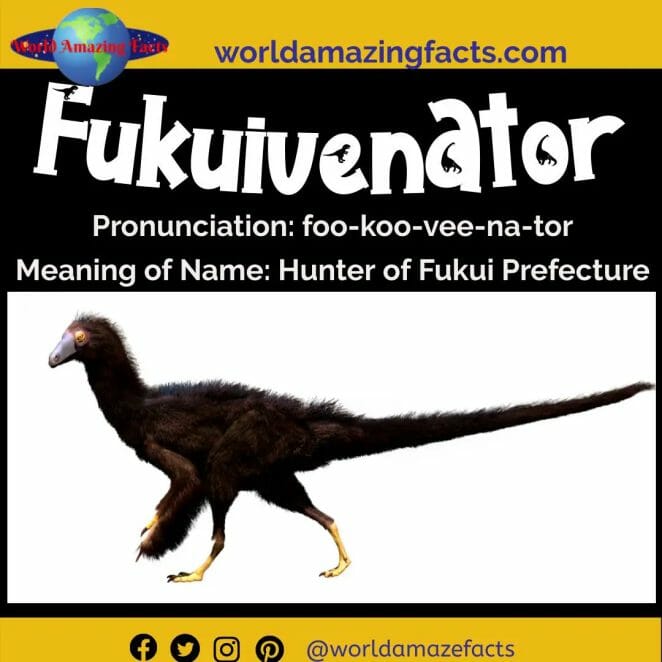 Fukuivenator paradoxus is an Early Cretaceous Japanese theropod. It could have been either omnivorous or herbivorous. In 2016, a group of mostly Japanese scientists described it.

The genus name Fukuivenator is derived from the Fukui Prefecture, where Fukuivenator remains were discovered, and the Latin word venator, which means “hunter.” The species name paradoxus relates to this dinosaur’s unusual anatomy. As a result, the whole name might be rendered as “Fukui’s paradoxical hunter.” 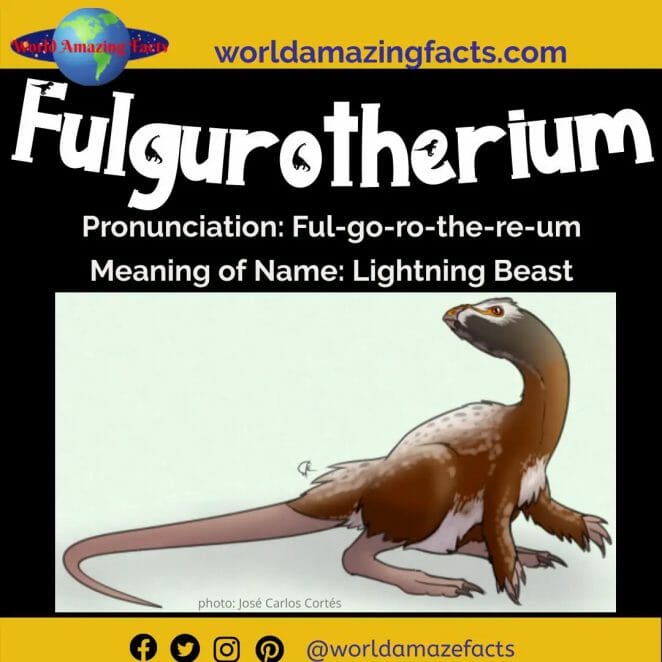 Fulgurotherium is a questionable dinosaur genus discovered in Lightning Ridge in New South Wales, Australia. Fulgurotherium originates from the Late Cretaceous period, between 99 and 96 million years ago.

In reference to the Lightning Ridge site in New South Wales, the genus name Fulgurotherium is derived from Latin fulgur, “lightning,” and Greek therion, “beast.” The name’s Latin derivation translates to “southern.” It is a rare instance of the suffix -therium being used to a non-extinct mammal. 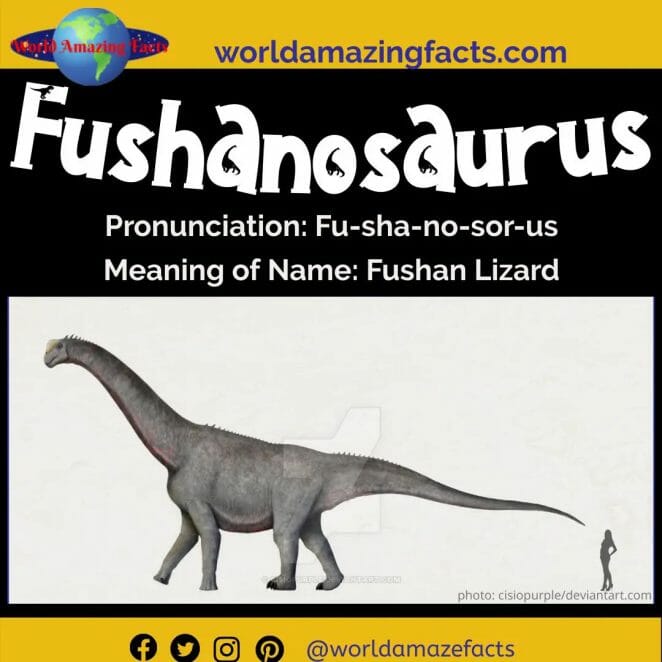 Fushanosaurus translates as “Fushan lizard.” The species name qitaiensis celebrates the town of Qita, where the remains of this animal were discovered. 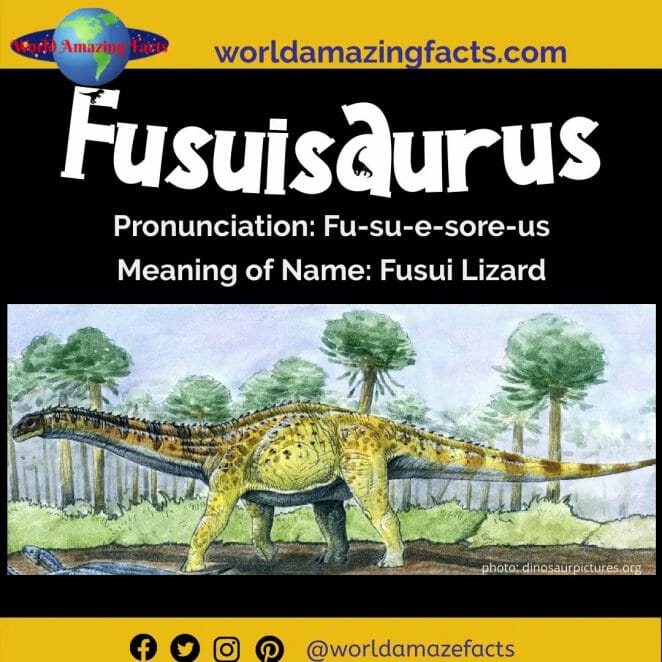 Fusuisaurus is a large but poorly understood sauropod that existed in what is now China during the early Cretaceous period. Mo et al. described it in 2006.

Fusuisaurus gets its name from the Fusui area and the Greek word sauros (“lizard”, “reptile”). The genre name pays tribute to Chinese palaeontologist Zhao Xijin. 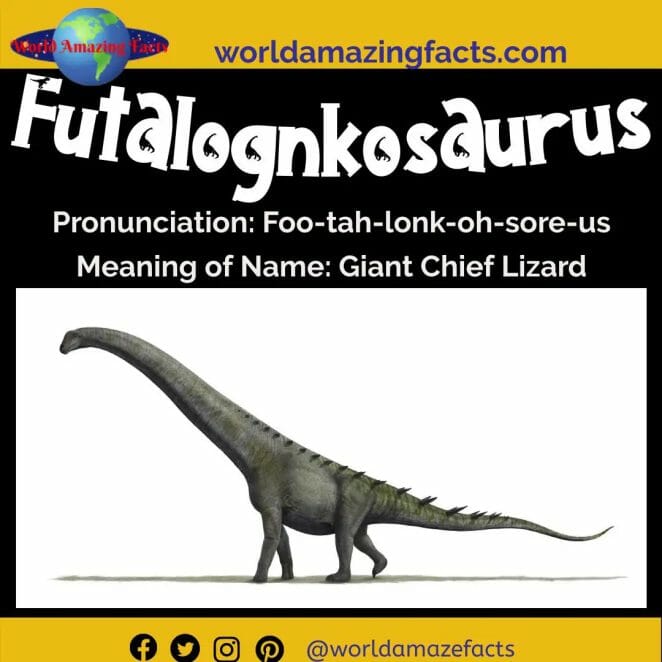 Futalognkosaurus is a type of somphospondyla from the Late Cretaceous period. It is one of the largest dinosaurs ever discovered. Between 2000 and 2004, Futalognkosaurus fossils were unearthed in Argentina’s Portezuelo Formation. Futalognosaurus most likely existed around 87 million years ago.

Futalognkosaurus gets its name from the Mapuce Indians’ native language: futa means “huge” and lognko means “primate.” As a result, it literally means “ruling gigantic lizard.” The name dukei is derived from the Duke Energy Argentina Company, who supported the excavation.

Fylax is a herbivorous dinosaur from the Hadrosauroidea lineage that lived in today’s Spain during the end of the Cretaceous period. Albert Prieto-Márquez and Miguel Angel Carrera Farias, two scientists, named and described Fylax in 2021.

Fylax is derived from the Greek word fylax (“caretaker). The genre name is derived from the Greek words thyra (“door”) and kolasi (“hell”). As a result, the entire phrase can be interpreted as “guardian of the gates of hell.” The name alludes to the fact that the dinosaur in question lived at the very end of the Cretaceous epoch, just before the catastrophic extinction.