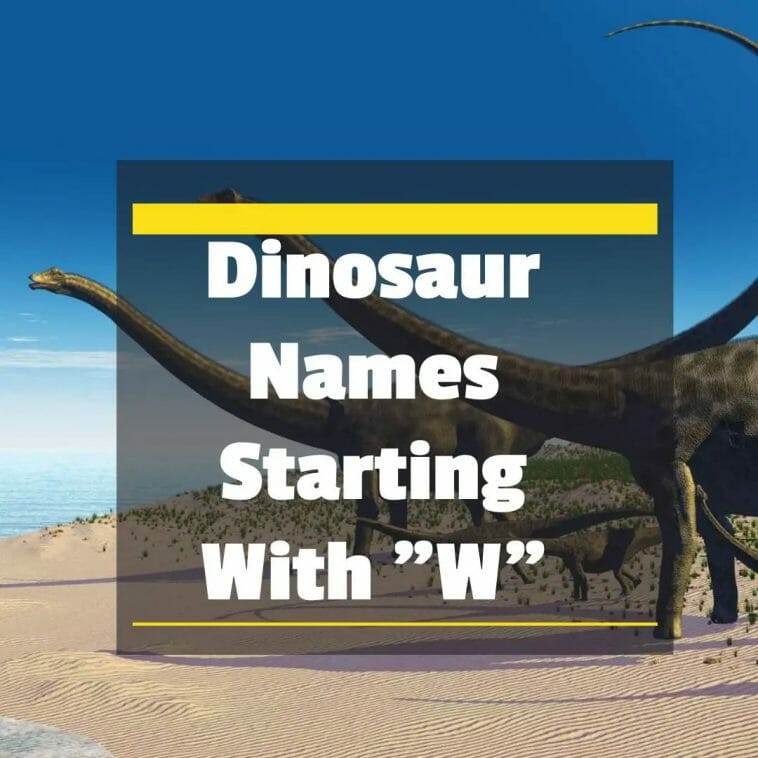 Check out the alphabetical list of dinosaur names beginning with the letter “W”. We’ll look at dinosaur pictures and discuss what their names mean, as well as learn more about dinosaur facts.

Dinosaurs with names that begin with the letter “W”

Contents for Dinosaur Names that Start with “W” 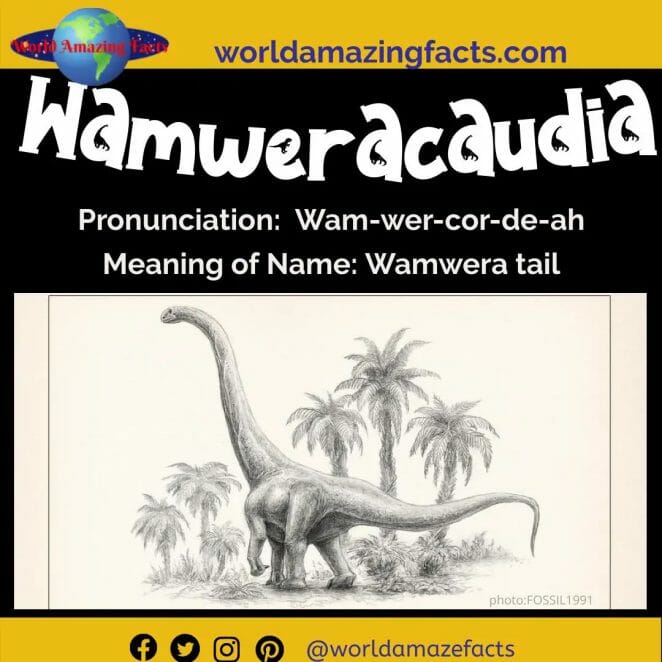 Wamweracaudia is a sauropoda from the Mamenchisauridae family that lived in Tanzania during the Late Jurassic period.

Wamweracaudia is derived from the Wamweraca, the most populous tribe in the Lindi region, and the Greek caudia (“tail”) in reference to the existing fossil material. Mohamaddi Keranje, who presided over the excavation activity, is honoured with the genre term keranjei. 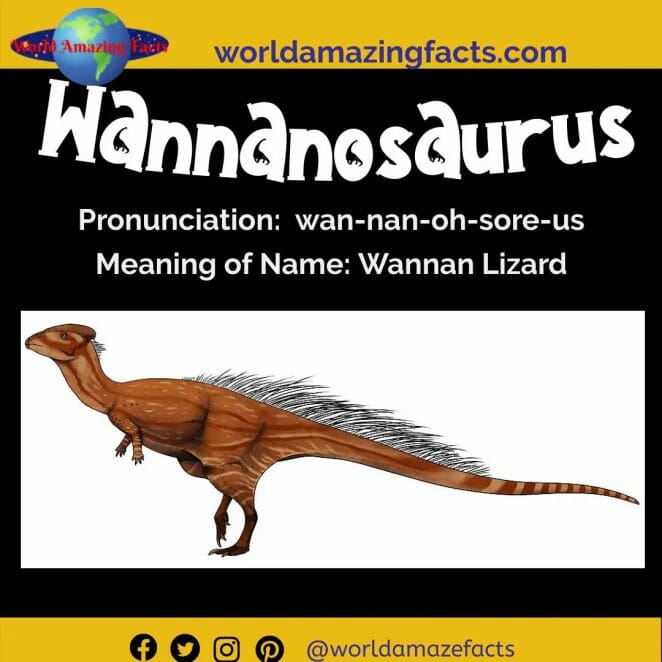 Wannanosaurus was a tiny pachycephalosaurus that lived in what is now Anhui, China, during the late Cretaceous period.

Wannanosaurus is derived from the Chinese terms Wan (another name for Anhui province), nan (“south,” referring to the fact that the dinosaur’s remains were discovered in the province’s southernmost region), and sauros (“reptile”, “lizard”). 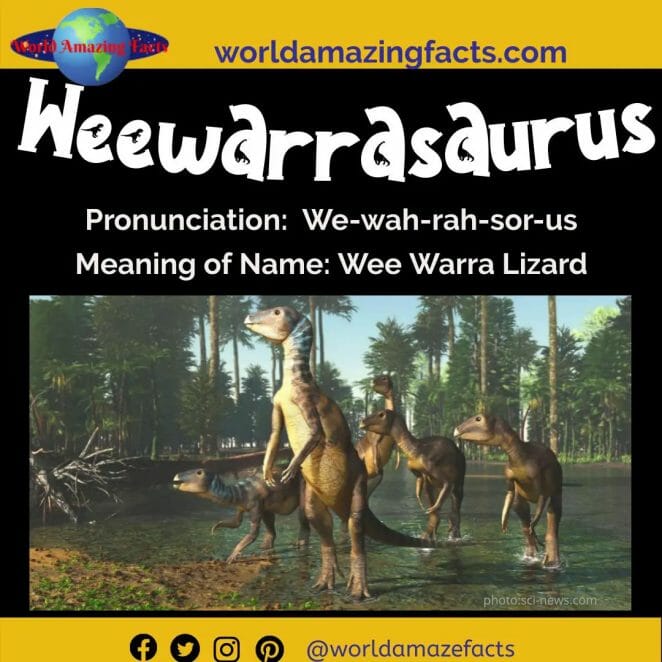 Weewarrasaurus was a herbivorous dinosaur that lived in what is now Australia during the Late Cretaceous period.

Weewarrasaurus was named from the location where its remains were discovered, Wee Warra. Mike Poben, who took over and offered the holotype to scientists, is honoured by the genre moniker.

Wendiceratops is a kind of Ceratopsid from the Late Cretaceous period. It is the fourth known genus of the Centrosaurinae, with bones discovered in the Oldman Formation (Canada, Alberta) dating from the middle Campanian – penultimate Cretaceous stage spanning the entire dinosaur era.

Wendy Sloboda, the discoverer of the spot where the remains of a vendiceratops were discovered (in 2010), is honoured with the generic name. The second component of the name, gr. ceratops, translates to “Wendy’s horned face.” The species epithet (pinhornensis) was obtained from the name of the Alberta reserve – Pinhorn Provincial Grazing Reserve in Alberta. 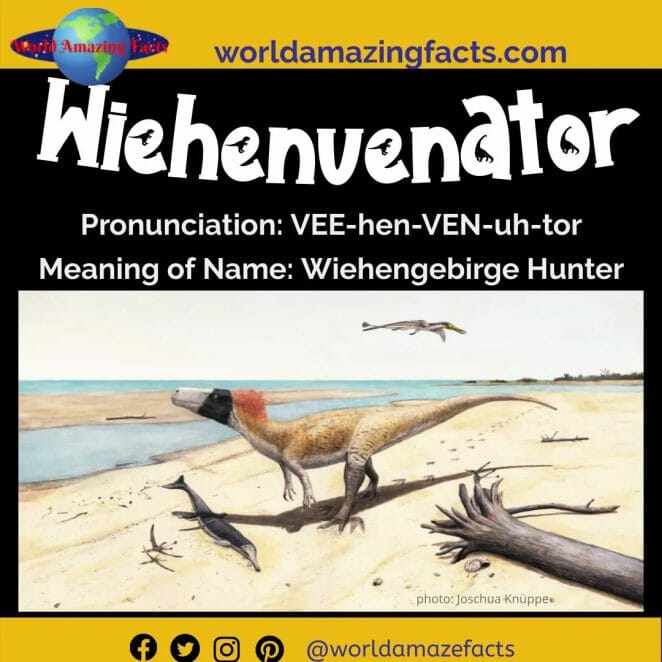 Wiehenvenator is a medium-sized Middle Jurassic theropod. In modern Germany, the remnants of Wiehenvenator were unearthed. Torvosaurus was its closest relative, according to Rauhut et al. (2016).

The name Wiehenvenator is derived from the Wiehengebirge mountain range south of Minden, Germany, and the Latin word venator, which means “hunter.” The species name albati honours Friedrich Albat, the dinosaur’s discoverer. 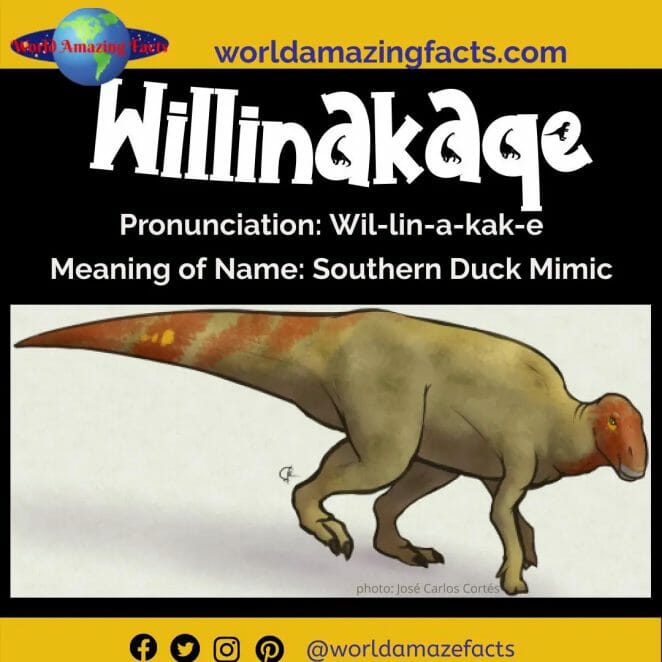 Willinakaqe is a dubious genus of duck-billed dinosaurs seen in Argentina today. It was discovered in these places near the conclusion of the dinosaur era, during the late Cretaceous period.

Willinakaqe is a mixture of three words: willi from Mapuche (southern), iná (imitator), and kaqe (duck). As a result, it can be translated as “the southern duck mimic.” The species name salitralensis relates to Salitral Moreno, where the first fossils were discovered. 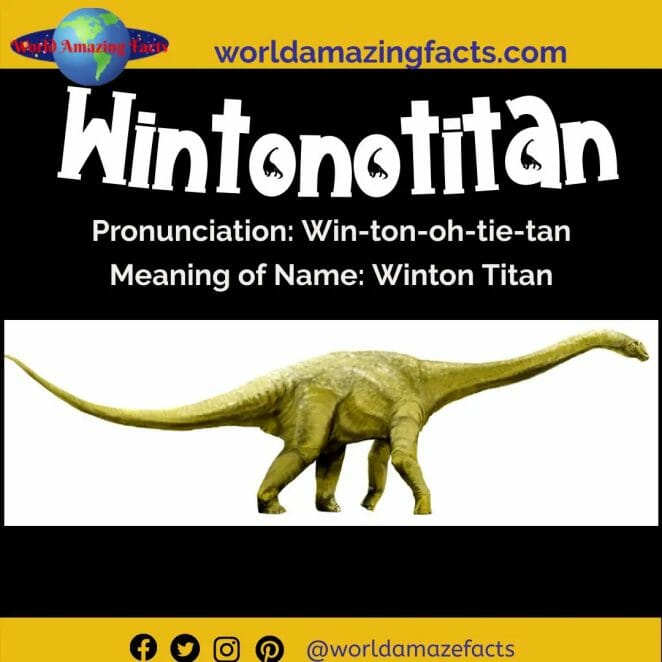 Wintonotitan is a medium-sized sauropod that was discovered in what is now Northeast Australia (fossils found approximately 60 km northwest of Winton, Queensland).

The generic name means “Titan of Winton” (the town near which the remains of the rock formation of the same name were found). The species member, on the other hand, honours Keith Watts, who discovered the dinosaur’s remains and presented them to the Queensland Museum in 1974. 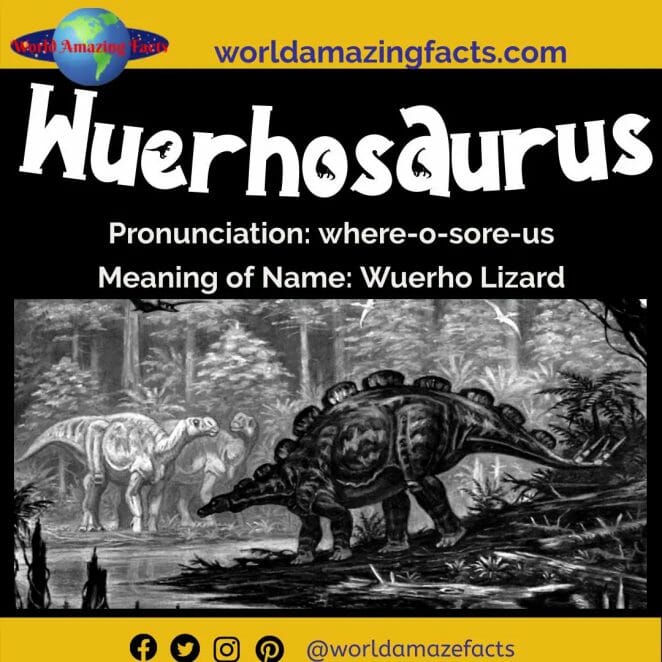 Wuerhosaurus was discovered in China and Mongoria as an early Cretaceous stegosaurus. It is a significant discovery since it disproves the theory that stegosaurs became extinct at the end of the Jurassic period. Wuerhosaurus possessed low bone plates, unlike other Stegosauridae members.

It was named for the city of Wuerho, near which the remains were discovered. 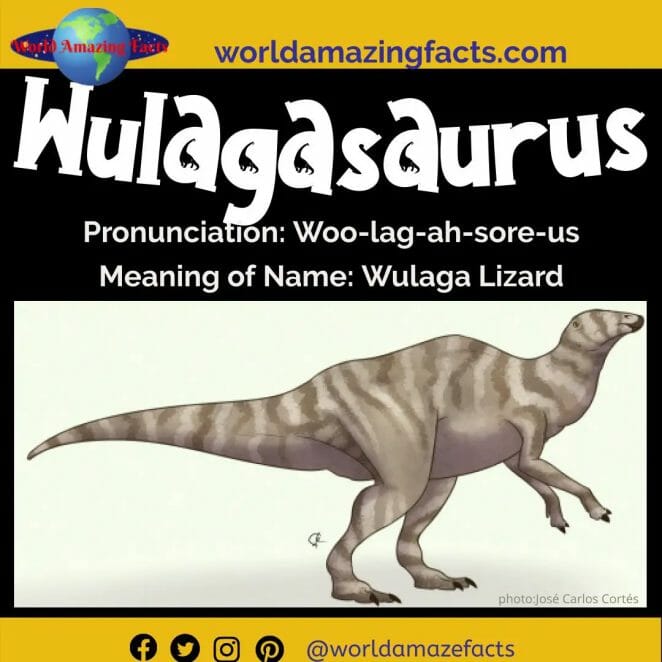 Wulagasaurus was a kind of hadrosaurid that existed in what is now Northeast China during the Late Cretaceous period. Wulagasaurus fossils were unearthed in the Yuliangze Formation of Maastrichtian sediments. In the same quarry, the bones of Sahaliyania and Charonosaurus lambeosaurins were unearthed. Godefroit et al. (2008) described it in the same work as Sahaliyania. Wulagasaurus, like its predecessors, was herbivorous.

The generic name derives from the location of the remains’ discovery, which is typical of Wulaga, and the genre epithet honours the prominent Chinese palaeontologist Dong Zhiming.

Wulatelong was a tiny bird-like theropod that lived in what is now Mongolia during the late Cretaceous period.

The generic name is derived from the location of discovery – Wulate – and the Chinese term long – dragon. The species name refers to the Gobi Desert, where the oviraptorosaurus’ remains were discovered. 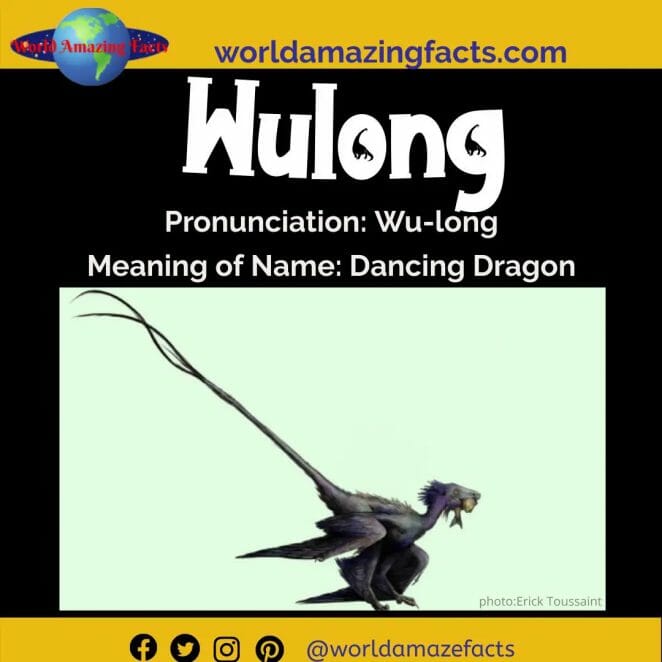 Wulong is a genus of a tiny, feathered theropod from the Dromaeosauridae family that lived in modern-day China during the early Cretaceous epoch. Sinornithosaurus was Wulong’s near relative. Ashley Poust and colleagues named and described Wulong in 2020.

Wulong is derived from the Chinese terms wu (“dance”) and long (“dragon”). It relates to the holotype’s posthumous position and predicted agility. The name of the genre is derived from Bohai Bay. 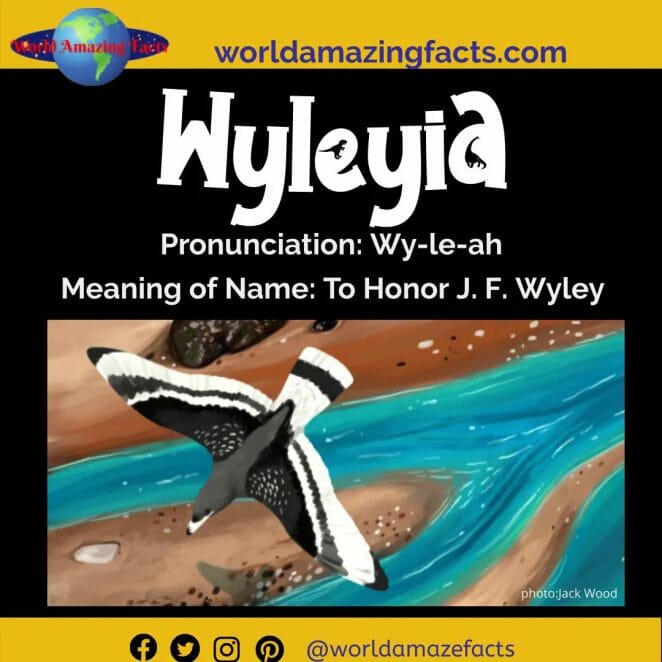 Wyleyia is a strange form of dinosaur, most likely a bird, known solely from a solitary humerus discovered in July 1964 by JF Wyley in the Early Cretaceous communities of Weald Clay near Henfield (British County Sussex). Wyleyia remnants were initially reported in Palaeontology in 1973 by CJO Harrison and CA Walker as Wyleyia valdensis.

The name commemorates the finder’s name as well as the location where the fossil was discovered. Wyleyia is most commonly categorised as a doubtful sort of bird, though it was once regarded an indeterminate representation of the Maniraptor despite not being a bird.