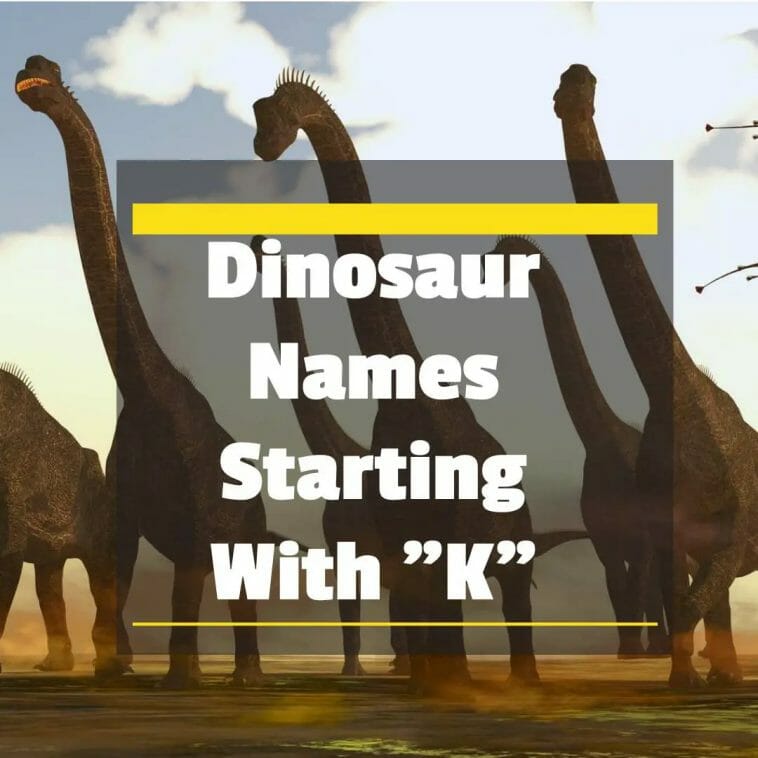 Check out the alphabetical list of dinosaur names beginning with the letter “K”. We’ll look at dinosaur pictures and discuss what their names mean, as well as learn more about dinosaur facts.

Dinosaurs with names that begin with the letter “K”

Contents for Dinosaur Names that Start with “K”

Kaijiangosaurus is a China’s Middle Jurassic carnivorous tetanuran theropod dinosaur genus. He Xinlu identified and characterised Kaijiangosaurus lini as its type species in 1984. The common name relates to the River Kai jiang. The name is a tribute to the palaeontologist Lin Wenqiu. 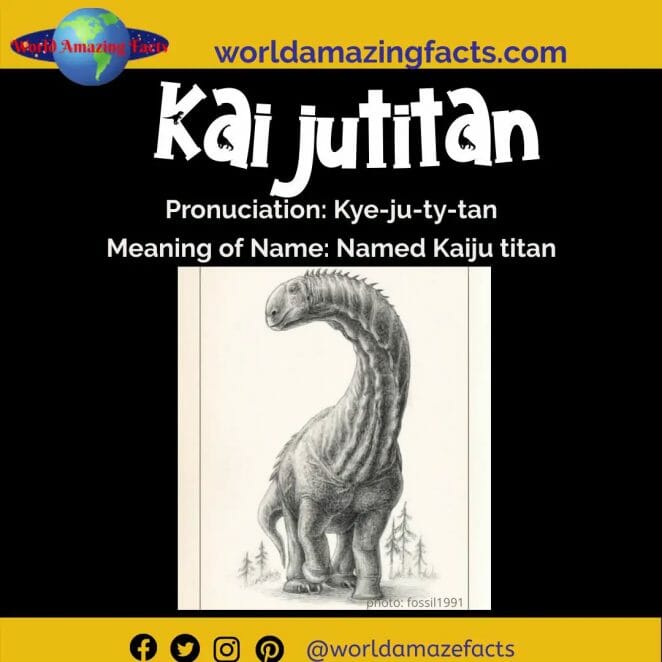 Kaijutitan is a type of massive sauropod from the Titanosauria group that existed in what is now Argentina during the Late Cretaceous period.

The name Kaijutitan is derived from the Japanese word Kaiju, which translates as “monster,” and the Greek titan (“giant”). The term maui comes from the abbreviation Museo Municipal Argentino Urquiza.

Kakuru is a theropod dinosaur genus from the early Cretaceous Period. The Rainbow Serpent from Aboriginal mythology inspired the name Kakuru. The species name derives from the Guyani tribe, who resided near the city where kakuru were discovered – Andamooka. 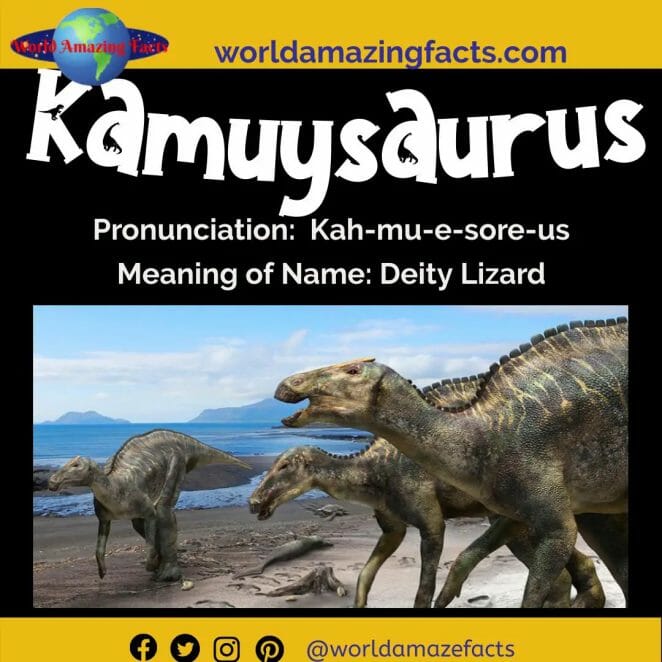 Kamuysaurus is a herbivorous dinosaur from the Hadrosauroidea group that lived in modern-day Japan during the late Cretaceous epoch.

The term Kamuysaurus is derived from the words kamuy (Hokkaido’s native language) and saurus (Greek) (“reptile”, “lizard”). Japan is referred to by the species epithet japonicus. 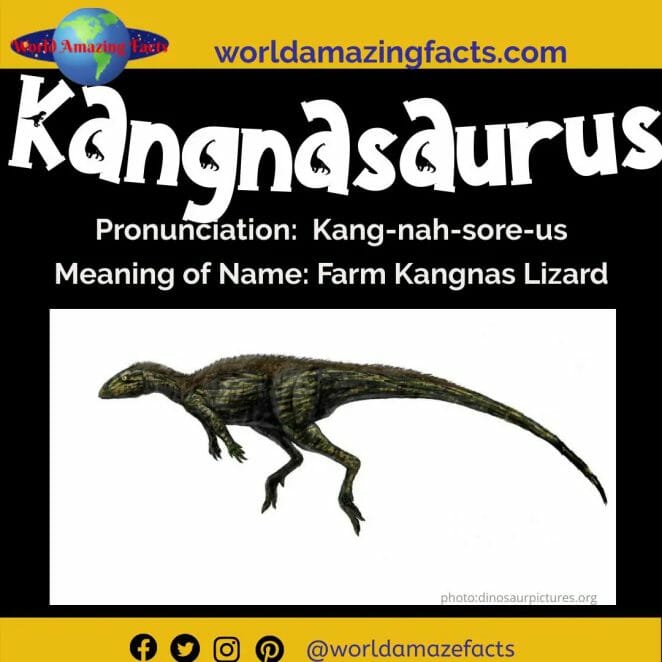 Kangnasaurus is an ornithopod dinosaur genus from the Early Cretaceous period. The dinosaur’s generic name is Farm Kangnas lizard, which refers to Kangnas farm. The type species, Kangnasaurus coetzeei, is named after a farmer called Coetzee. 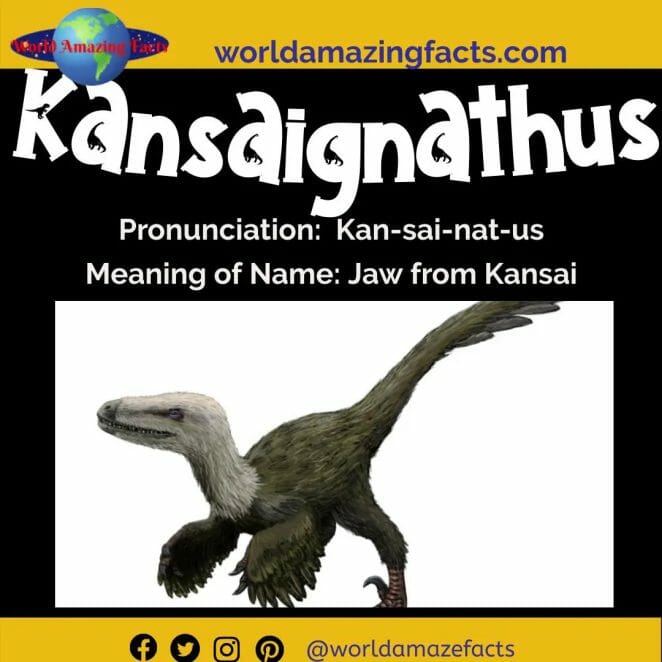 Kansaignathus is a genus of a tiny theropod of the Dromaeosauridae family that lives in Tajikistan now. It is one of the earliest members of the Velociraptorinae group, helping to bridge the gap between Deinonychus and the more evolved Campanian and Maastrichtian velocyraptorins.

Kansaignathus gets its name from the site of the remains, Kansai, and the Greek word gnathos (“jaw”). 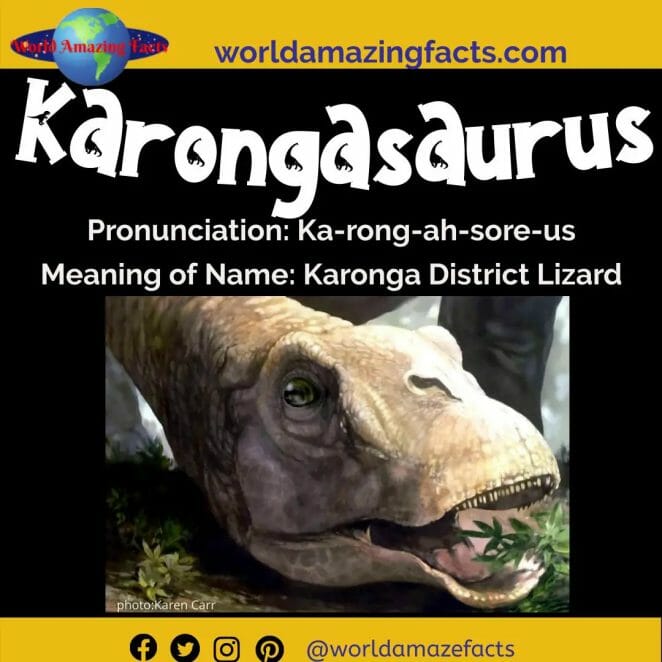 Karongasaurus was a titanosaur that lived in Africa during the early Cretaceous period.

The name Karongasaurus is derived from the location of the remains, the Karonga District in northern Malawi, and means “Karonga Lizard.” The genre moniker honours Steve Gittelman, a scientist who rose through the ranks to become the head of the Dinosaur Society. 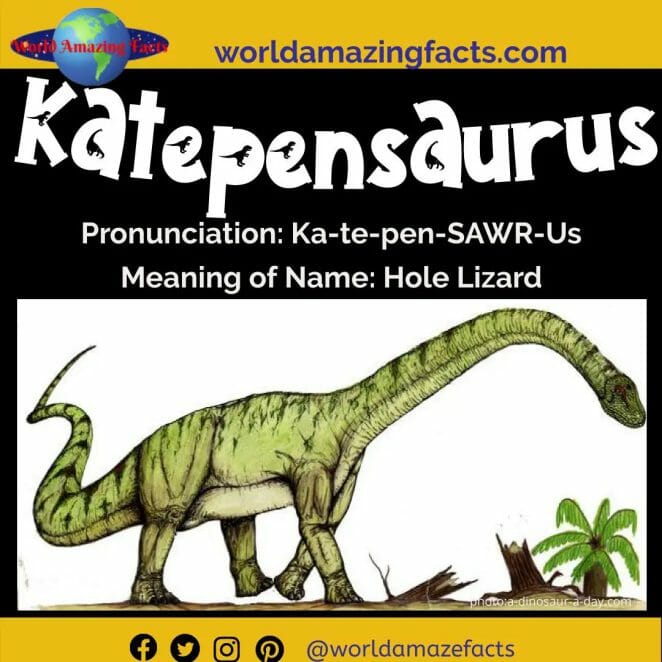 Katepensaurus Katepensaurus is a rebbachisauride dinosaur, which lived in Argentina during the Late Cretaceous period.

The name is derived from the term katepenk, which meaning “hole.” It is used in the Tehuelche language of Patagonia. The term alludes to the distinctive windows in the dorsal vertebrae that define this dinosaur. Saurus means lizard in Greek, and goicoecheai recognises Mr. Alejandro Goicoechea. 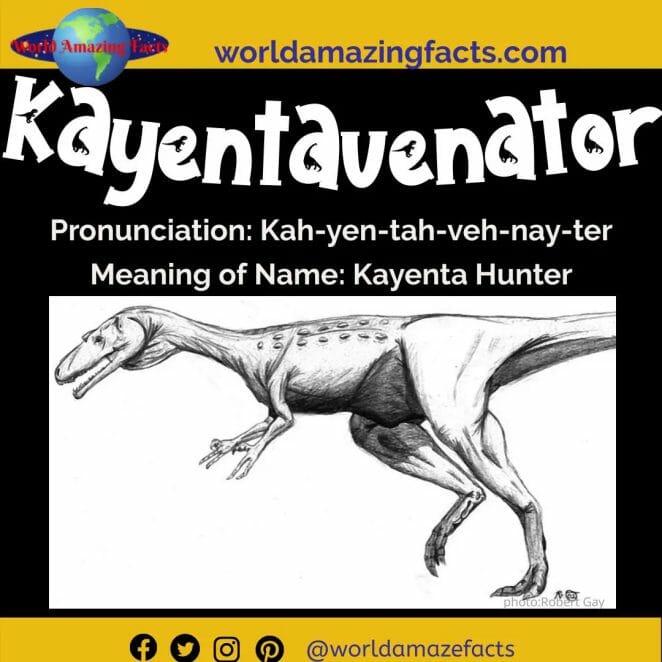 Kayentavenator is a dubious kind of theropod discovered in the Kayenta Formation of Arizona.

Kayentavenator elysiae is the only known species, described by Robert Gay in 2010. Its generic name translates as “Kayenta’s hunter” (the rock formation in which he was found). The genre designation elysiae likely honours a person named Eliza (Elysia). 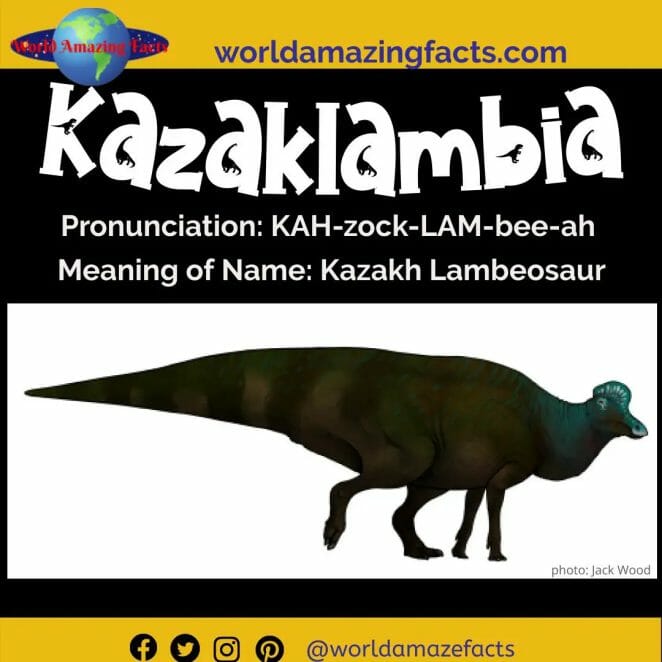 Kazaklambia is a kind of lambeosaurin that lived in present-day Kazakhstan during the Late Cretaceous period. This dinosaur is one of the oldest members of this group, lending credence to the Asian origin of lambeosaurins.

The first half of the generic name relates to Kazakhstan, and the word “lambia” alludes to a member of the genus Lambeosaurinae. The name convincens is derived from the word “convince,” which means “believe.” It relates to Rozhdestvensky’s claim that the species proves the Dabrazhin Formation’s Cretaceous age. 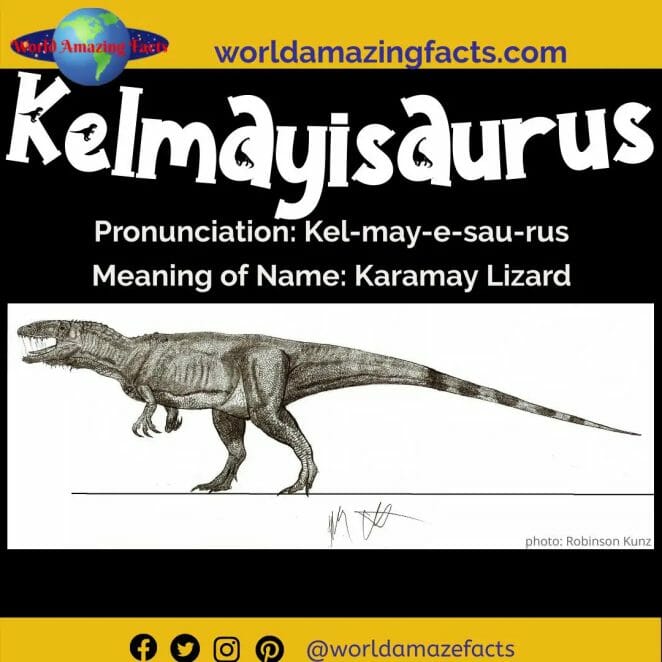 Kelmayisaurus was a huge theropod that lived in what is now China during the Early Cretaceous period ( Lianmugin Formation ). K. petrolicus is the most common species. The name Kelmayisaurus is derived from the Chinese city of Karamay. 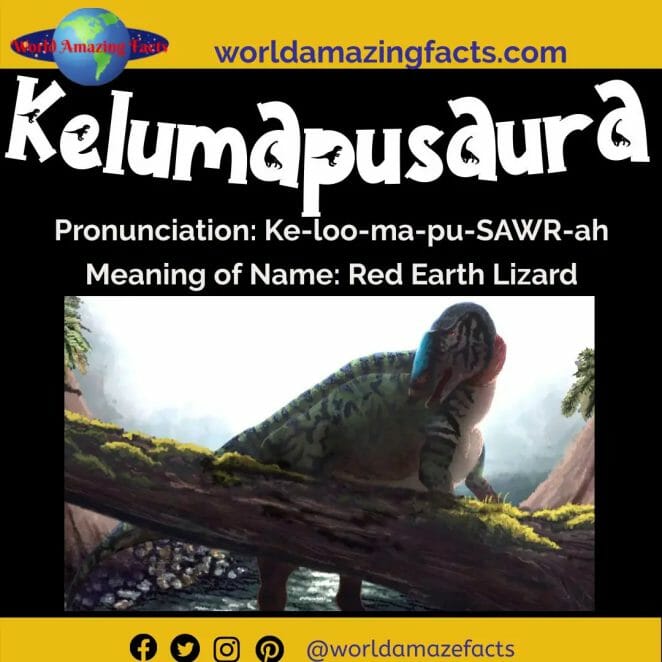 Kelumapusaura is a flat-headed hadrosaurid belonging to the Kritosaurini group. Sebastian Rozadilla and colleagues described it in 2022.

The genus name Kelumapusaura is derived from the Mapuche term Kelumapu, which means “red earth” in their native language. In the same language, the genre epithet machi means “shaman.” 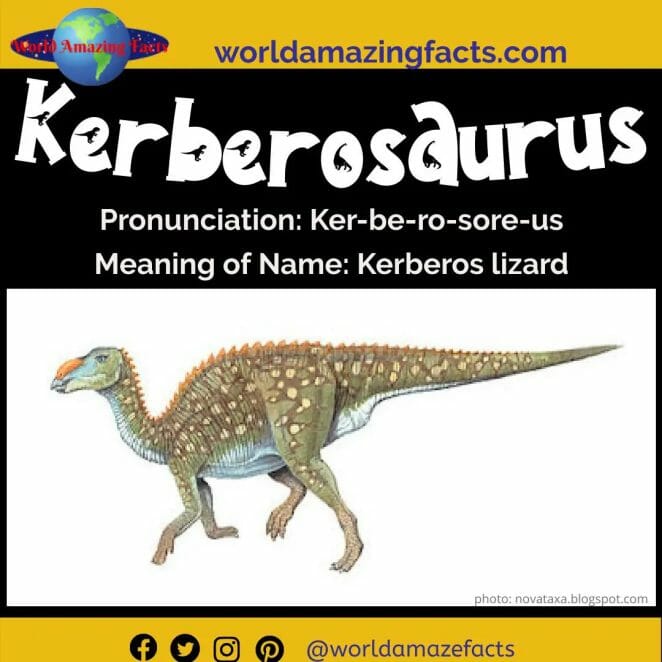 Kerberosaurus is a herbivorous dinosaur from the Hadrosauroidea group that lived in Russia during the Late Cretaceous epoch. Kerberosaurus was named and characterised in 2004 by Yuri Bolotsky and Pascal Godefroit, a team of scientists.

Cerberus, the legendary hound who guards the gates of Hades, inspired the name Kerberosaurus. The second element of the name, saurus, is derived from the Greek word sauros (“reptile”, “lizard”). 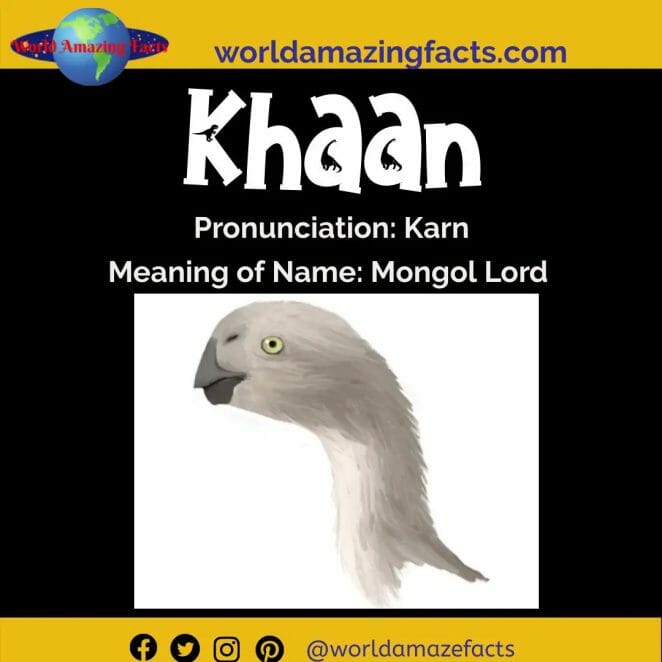 Khaan was a tiny theropod that lived during the Late Cretaceous period in Asia.

The generic name Khaan is derived from the Mongolian word khaan, which means “ruler.” This theropod’s species name (mckennai) honours Malcolm McKenn, who was passionate about and promoted the exploitation and exploration of Mongolia’s Cretaceous deposits. 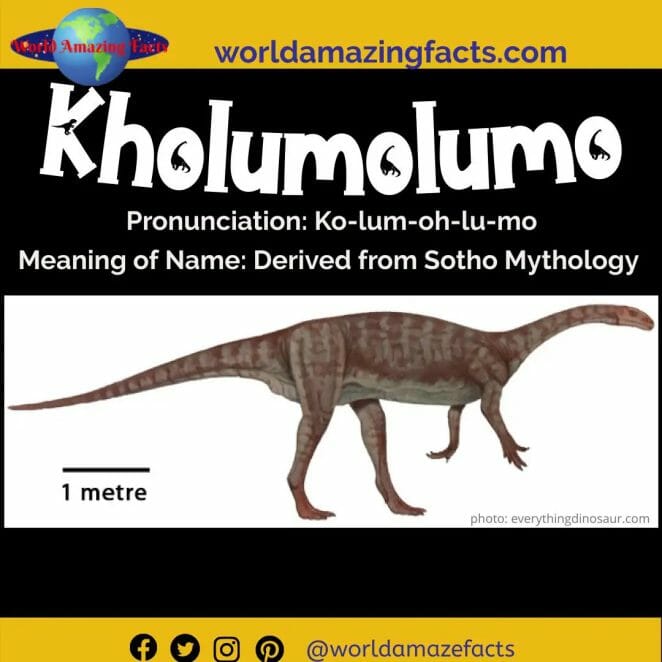 Kholumolumo is a sauropodomorph genus that lived in what is now the country of Lesotho in southern Africa during the Late Triassic period. Even though a lot of its bones were found between 1959 and 1970, it wasn’t properly named until 2020.

It was previously known as “Thotobolosaurus” and “Kholumolumosaurus,” but these names were not official. The name Kholumolumo is derived from a monster in Sotho folklore. The specific name is in honour of the Ellenberger family. 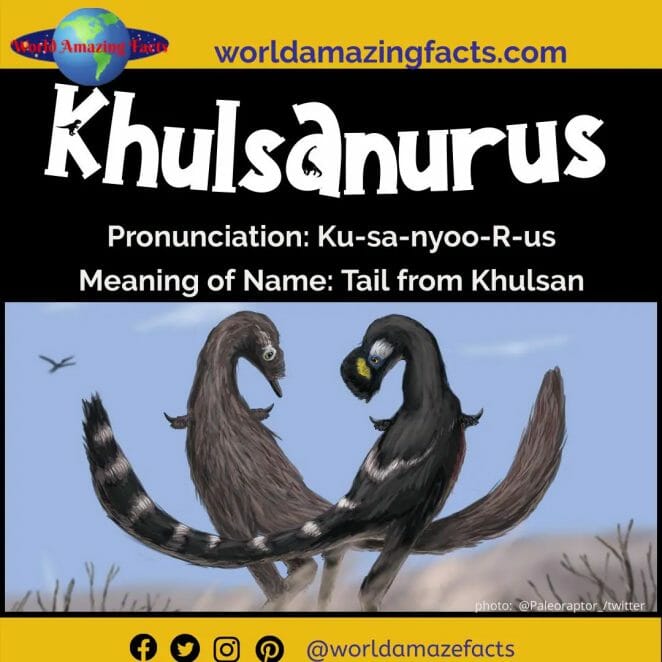 Khulsanurus is a genus of a tiny theropod of the Alvarezsauridae family that existed in what is now Mongolia during the Late Cretaceous period. Khulsanurus is the clade’s second representative, following Parvicursor, which was discovered in Khulsan.

The name Khulsanurus is derived from the remnants’ location (Khulsan) and the Latin urus (“tail”). In Latin, the genre epithet means “magnificent” or “impressive.” 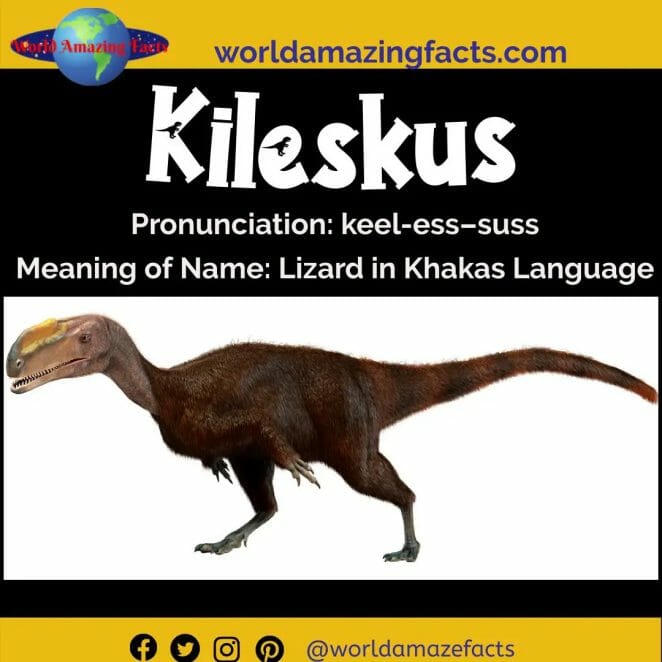 Kileskus is a Tyrannosauroidea basal representative from Russia’s Middle Jurassic. It is unknown whether Kileskus had a nasal bone crest.

Kileskus is a Khakas word that means “lizard.” The species name (arictotocus – of noble origin) refers to the dinosaur’s evolutionary position as a member of the advanced theropod (Coelurosauria) group. 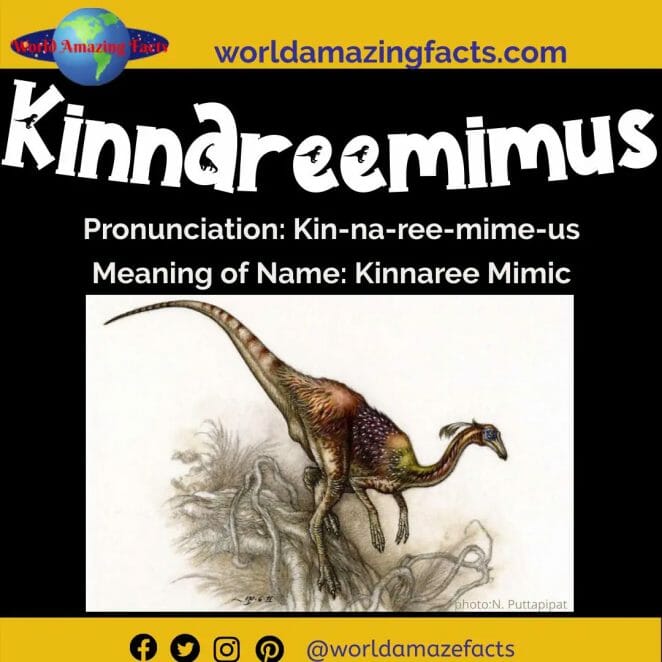 Kinnareemimus was a theropod that lived in Northeast Thailand during the Early Cretaceous period. It is one of the oldest ornithomimosaurs ever discovered, having been discovered in valanina and hotery before 140-130 million years ago (or later, perhaps in the barrema , 130-125 Ma ). Nonetheless, the metatarsus structure suggests that it is more advanced than the geologically younger Garudimimus and Harpymimus, but more basal than Archaeornithomimus.

Kinnareemimus derives its generic name from Kinnaree, the name of a graceful creature in Thai mythology with the body of a lady and the legs of a bird that, according to folklore, lives the fabled Himmapan jungle, a reference to the holotype’s bird-like form. It was known informally as “Ginnareemimus” before the bones were properly described. And the genre name alludes to the province of Khon Kaen, where the bones were unearthed.