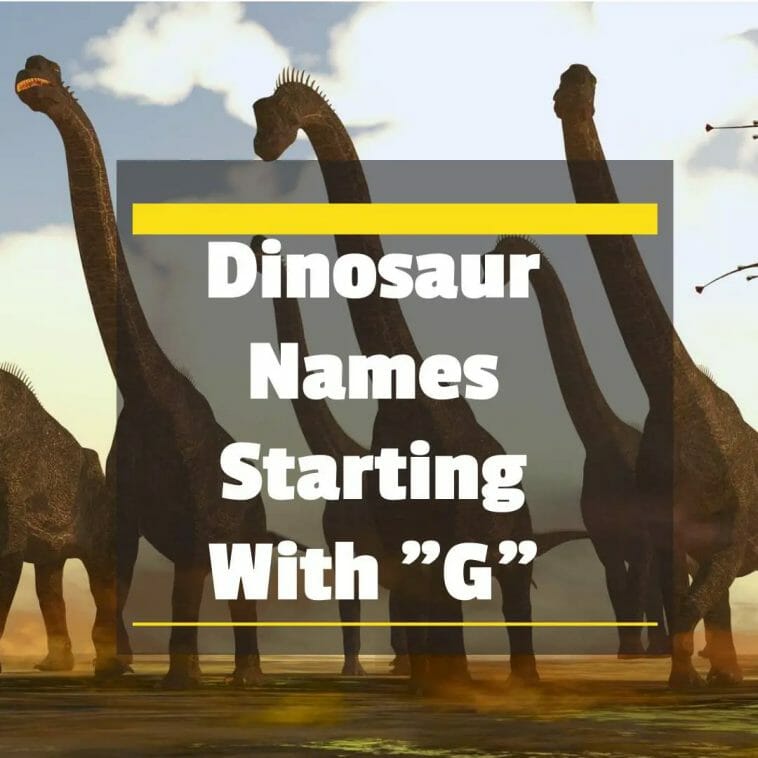 Check out the alphabetical list of dinosaur names beginning with the letter “G”. We’ll look at dinosaur pictures and discuss what their names mean, as well as learn more about dinosaur facts.

Dinosaurs with names that begin with the letter “G”

Contents for Dinosaur Names that Start with “G”

Galleonosaurus is a kind of small herbivorous dinosaur that lived in what is now Australia during the early Cretaceous period.

Galleonosaurus is derived from the Greek galleon (a sort of sailing ship) and sauros (“reptile”, “lizard”). It relates to the jaw bone’s resemblance to the profile of a galleon. The species epithet commemorates Doris Seegets-Villiers for her contributions to the fossil research at Flat Rocks.

Gallimimus is an ostrich-shaped dinosaur that lived in Late Cretaceous Mongolia. It is the largest known Ornithomimidae representative.

Gallimimus means “chicken mimic,” and it refers to the structure of the anterior cervical vertebrae, which is similar to that of scoring. The species name (bullatus) relates to the peculiar “capsule” placed at the base of the skull; it is derived from the Latin bull, which was a golden capsule worn around the neck by young Roman patricians. 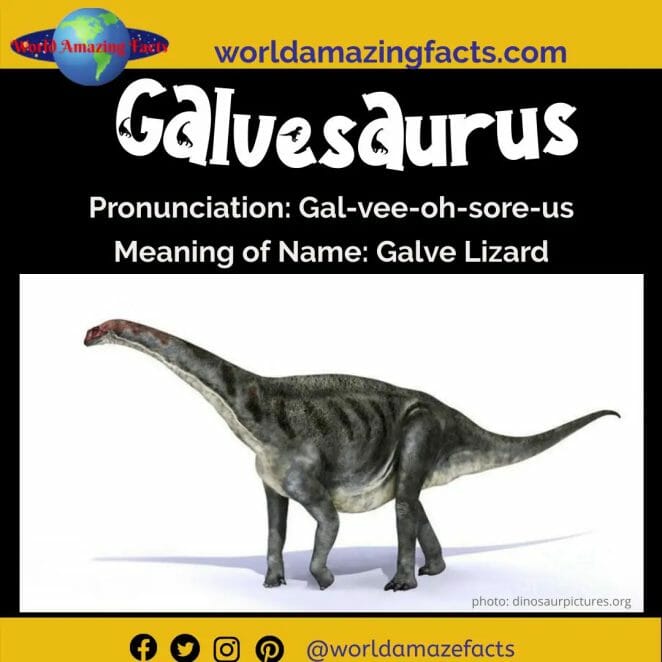 The Galveosaurus fossils were discovered in the Spanish town of Galve (hence the generic name – “Galve lizard”). Instead, the species was named after the dinosaur’s discoverer, José Mara Herrero.

Gannansaurus is a titanosaur-shaped sauropod that lived in the late Cretaceous period of today’s southern China. It has numerous traits with the early Cretaceous Euhelopus, according to palaeontologists who described its scarce fossils.

Gannansaurus is a genus name that means “Gannan Lizard” – a district in Jiangxi Province. The second part of the scientific name sinensis translates as “Chinese.”

Ganzhousaurus is a Late Cretaceous theropod that lived in modern-day China.

Ganzhousaurus and the species epithet nankangensis both allude to the location of the discovered remains, Ganzhou City and Nankang County, respectively.

Gargoyleosaurus means “gargoyle lizard” and refers to the likeness of this animal’s skull in profile to a gargoyle (decorative end of the gutter). The species name parkpinorum (formerly parkpini) honours the holotype’s discoverers, J. Parker and T. Pinegar (Carpenter et al., 1998). 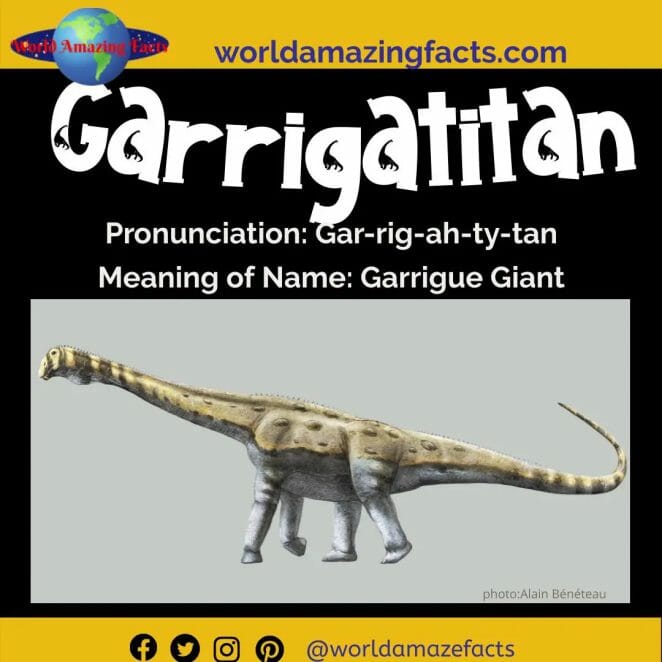 Garrigatitan is a kind of sauropod that existed in what is now France during the late Cretaceous period. Verónica Dez Daz and colleagues described it in 2020.

The name Garrigatitan is derived from the Occitan word garriga, which refers to a type of low Mediterranean flora common near the site of the dinosaur’s discovery, and the Greek titan (“giant”), which is frequently used in the names of Titanosauria dinosaurs. The genre name is derived from the Latin meridionalis, which means “southern,” and refers to the remains’ location in southern France.

Garudimimus is a genus of medium-sized ornithomimosaurus from Mongolia’s early late Cretaceous epoch. It was a toothless herbivore or omnivore, like most of its cousins. 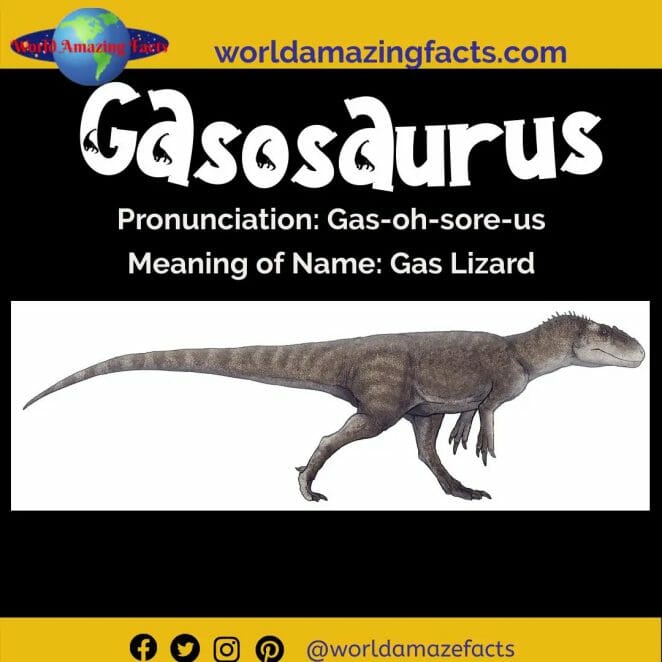 Gasosaurus was a theropod of modest size. It illustrates the early stage of Celurosaur development. Dong Zhiming and Tang Zilu described Gasosaurus in 1985 based on bones discovered at the Dashanpu dinosaur quarry.

This site dates from the Middle Jurassic and is part of the Sichuan sedimentation basin. The generic name, which means “gas lizard,” was given in honour of the gas extraction firm.

Gasparinisaura was a tiny herbivorous dinosaur that existed in Argentina during the late Cretaceous period. It is well-known for its abundant fossil material, which includes the remains of multiple individuals. Rodolfo Coria and Leonardo Salgado, two Argentine palaeontologists, described Gasparinisaura in 1996.

Gasparinisaura is named for Dr. Zulma Gasparini, who made significant contributions to the study of Patagonia’s Mesozoic reptiles. The species name is derived from Cinco Saltos City, near which the fossils of the Gasparinisaura were discovered.

Gastonia is a North American genus of medium-sized ankylosaurus that existed in Utah during the Early Cretaceous period. James Kirkland described a typical species, G. burgei, in 1998.

Gastonia was named for palaeontologist Robert Gaston, who discovered the spot where the dinosaur’s bones were discovered. The genre name, on the other hand, honours Donald Burge, the director of the College of Eastern Utah Prehistoric Museum and one of the authors of the description of the utahraptor – theropod discovered in the same area as gastonia. G. lorriemcwhinneyae, named after Lorrie McWhinney, who found the new gastonia bone layer in 1999, was described in 2016. 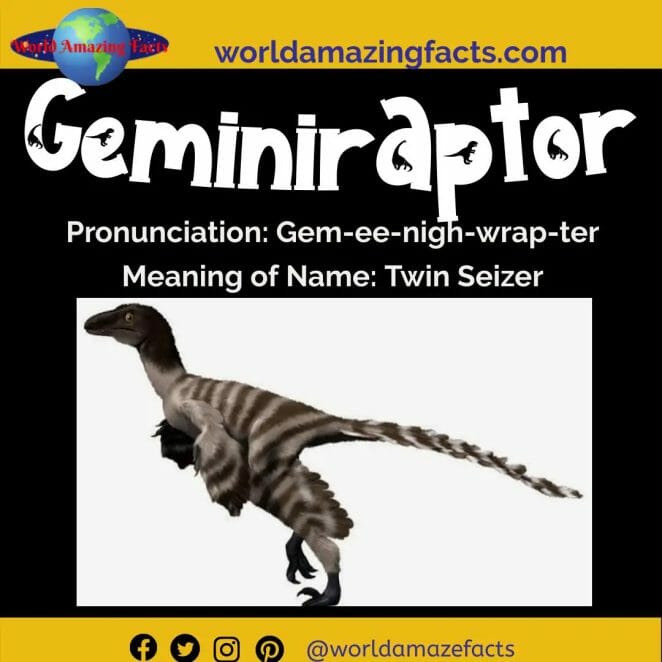 Geminiraptor is a theropod genus of the Troodontidae family that lived in modern North America during the early Cretaceous period.

The name Geminiraptor is derived from the Latin geminae (“twins”) and the Greek raptor (“robber”), which is a common component of Deinonychosaur systematic names. The usual species name, suarezarum – like the genre – celebrates the twin geologists Celina and Marina Suarez who found the Suarez site. 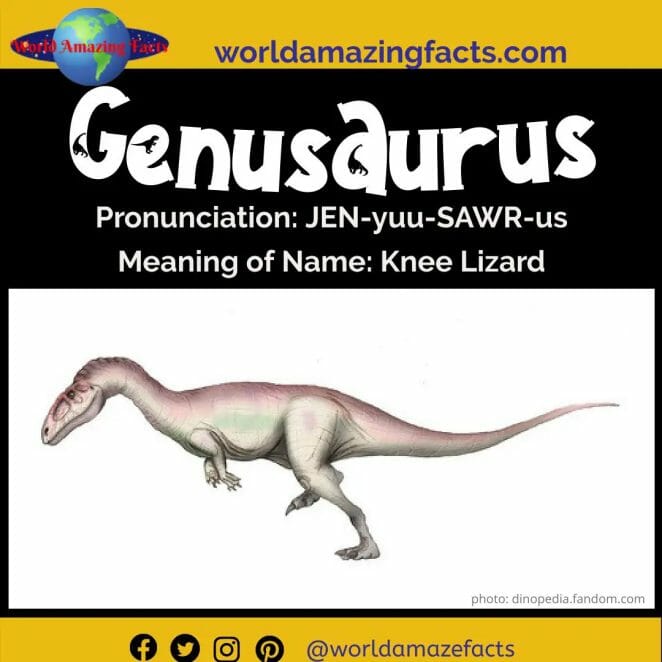 Genusaurus was an Abelisauroid that existed in what is now southern France during the Early Cretaceous period. Genusaurus could be a member of the Noasauridae or Abelisauridae families. The first remains were discovered in 1984 near the town of Sisteron in the region of Alpes-de-Haute-Provence. More bones were discovered two years later. A team of palaeontologists led by Hugues Accarie, Bernard Beaudoin, Jean Dejax, Gérard Friès, Jean-Guy Michard, and Philippe Taquet described it in 1995.

The name Genusaurus is derived from the Latin words geniculum (“knee”) and sauros (“lizard”), and refers to the tibia’s highly developed cnemial crest. The genre name “sisteronis” is derived after the town where his remains were unearthed.

Genyodectes was a huge theropod that lived in Argentina during the early Cretaceous period. Genyodectes, until thought to be a doubtful genus, is now the earliest formed major genus of South American dinosaurs (along with Loncosaurus , whose material includes a theropod tooth).

The name Genyodectes means “biting jaw.” The term derives from the Greek words genys (jaw) and dektes (bite), and it refers to jaws in which “the inner wall of the tooth bone that completes the socket seems to be continuous and as high as the outer wall.”

Geranosaurus is a dubious type of avian dinosaur that existed in what is now South Africa during the Early Jurassic period.

It gets its name from the Greek words geranos (crane) and sauros (” lizard , reptile ). 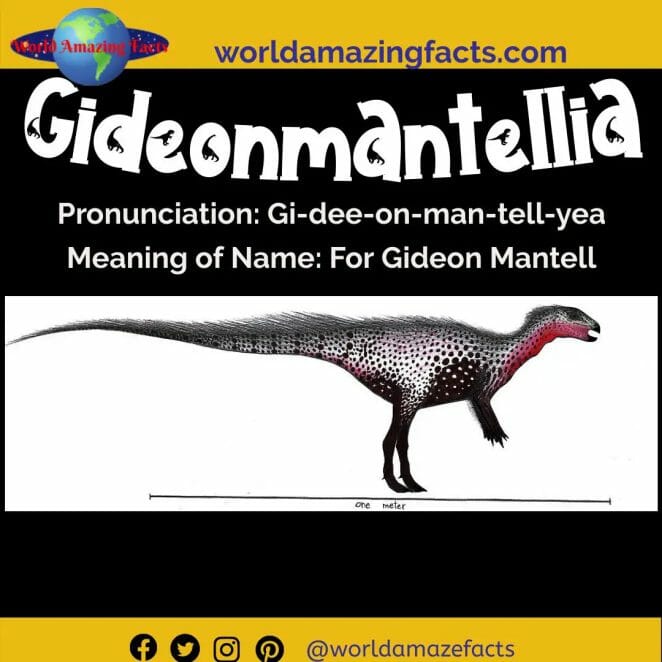 Gideonmantellia is named after Gideon Mantell, an English physician and palaeontologist who identified the remains of the “hypsylphodonts” for the first time. The genre name honours Olga Maria Amo Sanjuan, the author of a work on Galve early Cretaceous vertebrate egg shells who died suddenly in 2002.

Giganotosaurus is a massive advanced carcharodontosaurid that lived in South America during the Late Cretaceous epoch.

The name Giganotosaurus is a combination of the Latin gigan (giant) and the Greek notos (southern) and saurus / sauros (lizard), which relates to the gigantic size and location of discovery. The name honours the dinosaur’s discoverer, Ruben D. Carolini. 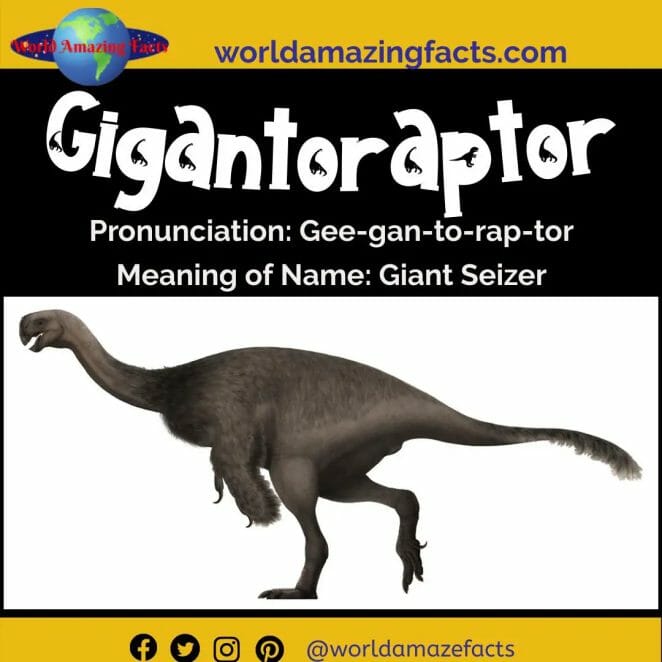 Gigantoraptor erlianensis is a large, bird-like theropod in the Oviraptorosaurus genus.

The generic name relates to the “raptor’s” size. The genre name was derived from the location of discovery, the Erlian Basin. The animal’s full name thus translates as “giant robber from Erlian.”