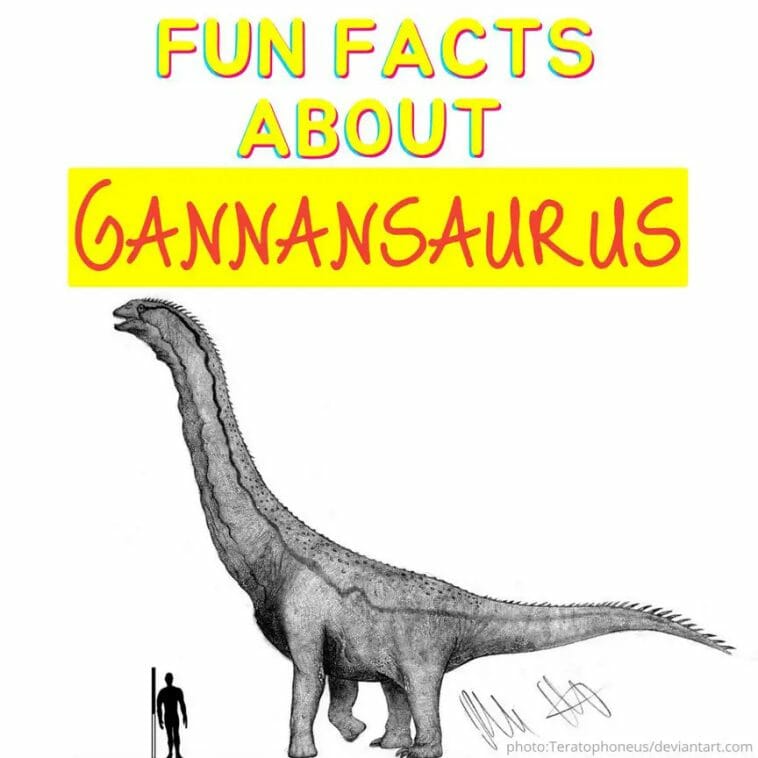 Gannansaurus is a sauropod reported in 2013 that resembles a titanosaur and dwells in the Late Cretaceous Nanxiong Formation of Ganzhou Basin, Jiangxi Province, southern China. Only a thoracic vertebra that was mostly whole and a middle caudal vertebra from this medium-sized sauropod called Gannansaurus were found.

According to the palaeontologists that described the few specimens of Gannansaurus, it shares several traits with the early Cretaceous Euhelopus. The describers were able to pick out a few oddities, all of which had to do with the spine’s complex system of ribs and bumps on the sides. There are two forward-facing triangular chambers on the ridge between the vertebral body and the anterior articular projection.

Continue reading if you’re interested in learning more about this dinosaur, Gannansaurus.

Contents for Fun Facts about Gannansaurus

2: How do you pronounce ‘Gannansaurus’?

3: What does the name Gannansaurus mean?

Gannansaurus means “Gannan Lizard,” which is the name of a district in Jiangxi Province. The word “Chinese” is what the second part of the scientific name sinensis means.

Because the genus is based on the description of one and a half fossilised vertebrae, little is known about Gannansaurus’s appearance or the strength of its teeth. Only one dorsal vertebra and one middle caudal vertebra made it through the destruction. Gannansaurus and Euhelopus share one trait, a cross-pattern of “K” laminae. The camellate pneumaticity of Gannansaurus dorsal vertebrae is comparable to that of Euhelopus, although the pleurocoels of these two taxa are distinct.

Gannansaurus’s pleurocoel is shaped like an eye, but it’s inside a large, round, deep concavity with a sharply defined dorsal margin. In contrast, Euhelopus’s pleurocoel is small, eye-shaped, and shallow, and it doesn’t have a sharply defined dorsal margin. The lateral concavity of Gannansaurus’ dorsal vertebra is round and big, similar to the pleurocoels of most neosauropods, which are oval to subcircular, such as Apatosaurus, Diplodocus, Haplocanthosaurus, and Camarasaurus.