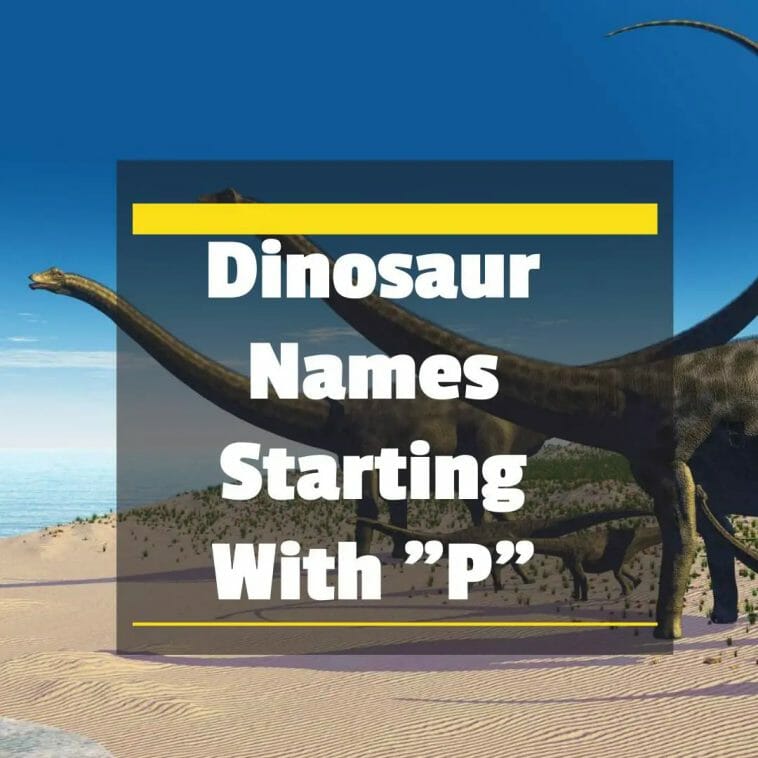 Check out the alphabetical list of dinosaur names beginning with the letter “P”. We’ll look at dinosaur pictures and discuss what their names mean, as well as learn more about dinosaur facts.

Dinosaurs with names that begin with the letter “P”

Contents for Dinosaur Names that Start with “P” 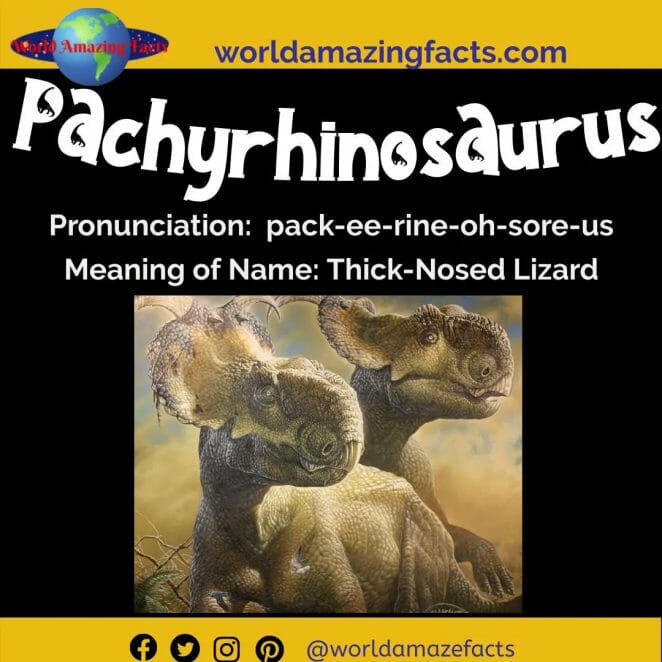 Pachyrinosaurus is a North American centrosaurin from the Late Cretaceous period.

Pachyrhinosaurus is derived from the Greek terms pachy, which means thick, rhino, which means nose, and sauro, which means lizard. The name refers to its hefty nose and means “thick-nosed lizard.” 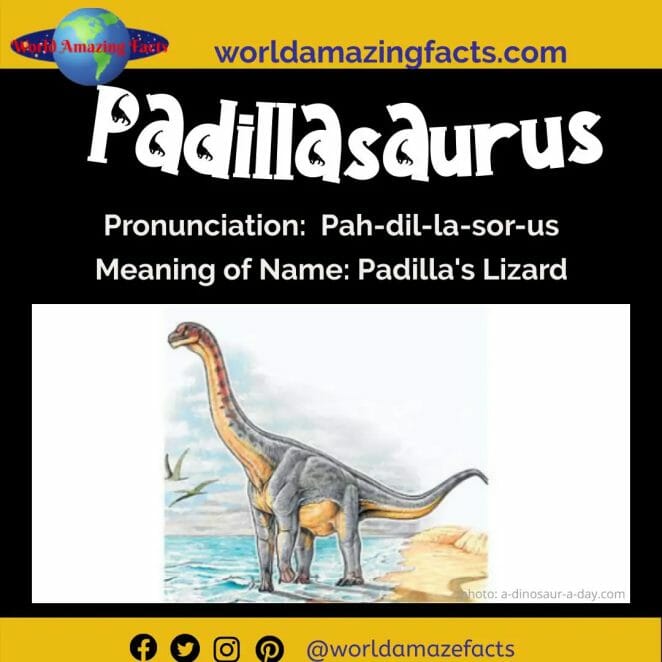 Padillasaurus is a sauropod from the Brachiosauridae (or Somphospondyli) family that inhabited the area of modern-day Colombia 127 million years ago or earlier.

Padillasaurus is named in honour of Dr. Carlos Bernard Padille Bernala (1957-2013), a palaeontology enthusiast who fostered the development of the Colombian fossil collection and fossil study. The second half of the Latin name is derived from the location near Villa de Leiva where the remains of Padillazaura were discovered. 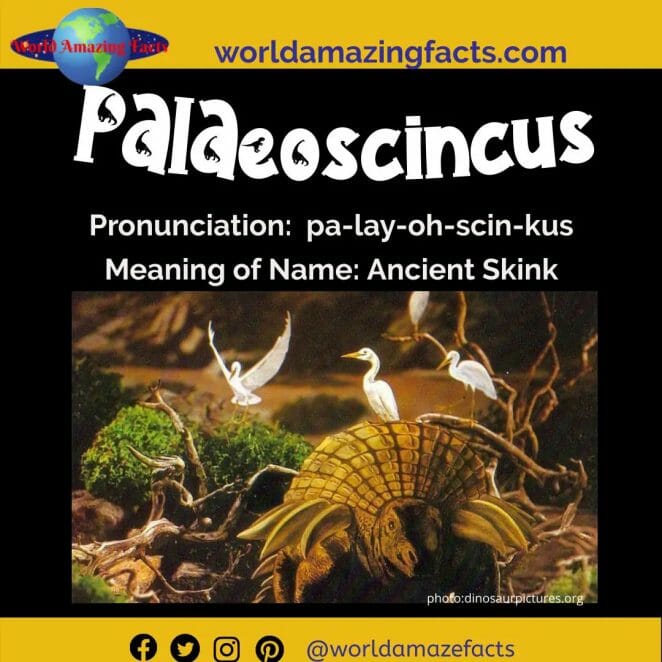 Palaeoscincus is a questionable ankylosaurian dinosaur genus based on teeth from Montana’s Upper Cretaceous Judith River Formation. Palaeoscincus is a historically significant genus with a complicated taxonomy that has been largely abandoned by current dinosaur palaeontologists. 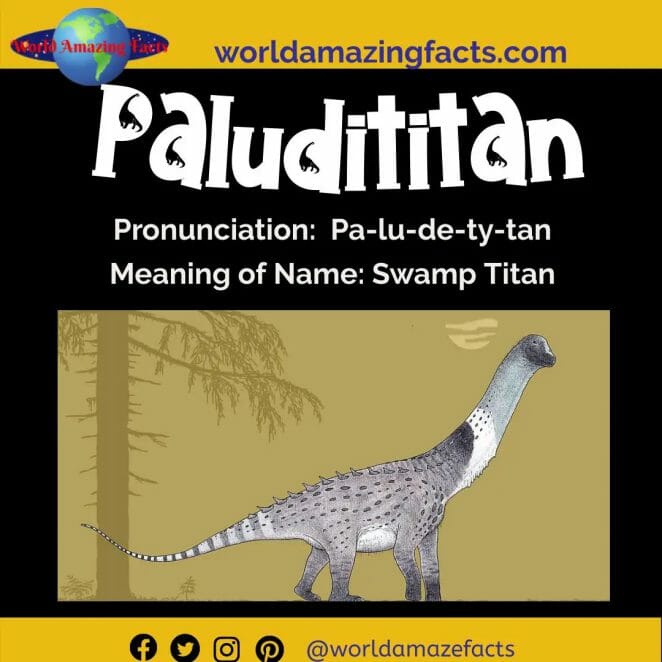 Paludititan is a generic name that means “swamp titan.” It refers to the floodplains found in the Hateg Basin, which helped to develop swamps and marshes. The species name nalatzensis was derived from the location of the holotype, Nălat-Vad. 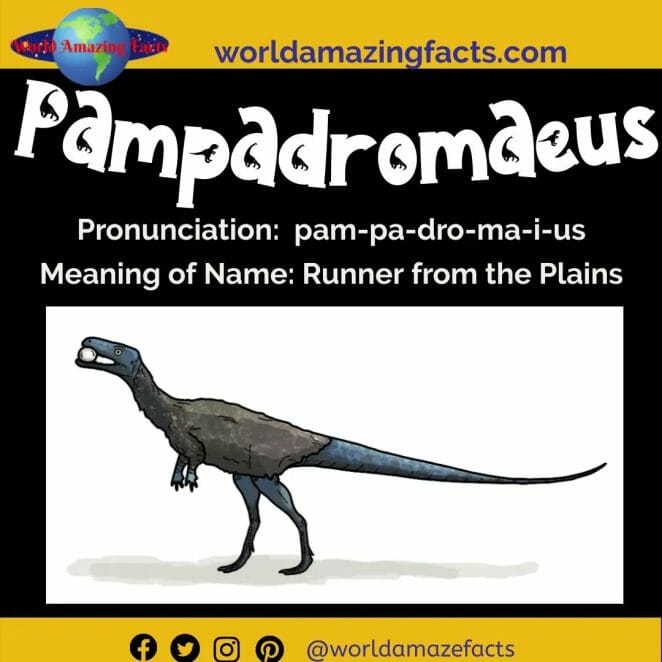 Pampadromaeus barberenai was a tiny, basic sauropodomorph that existed in what is now Brazil during the Late Triassic period.

The genus name was derived from the Quechua word pampa and the Greek word dromeus, which means “runner.” Mário C. Barberena, a palaeontologist, is honoured by the genre name. 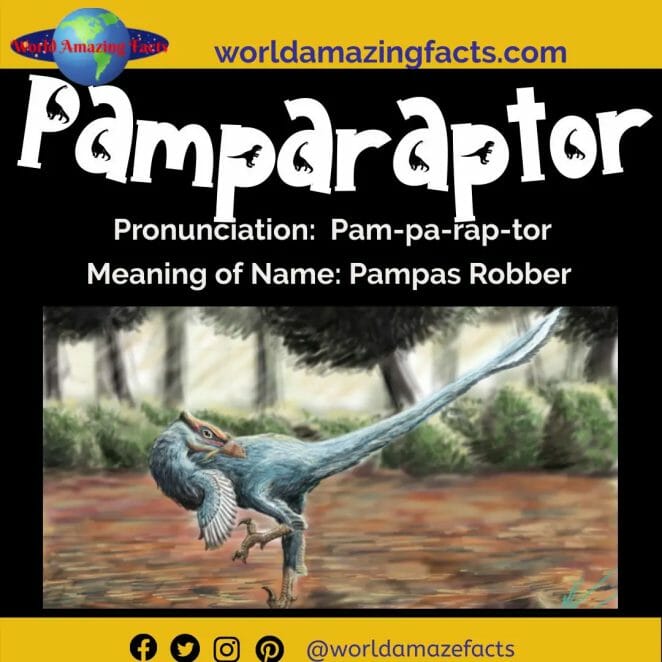 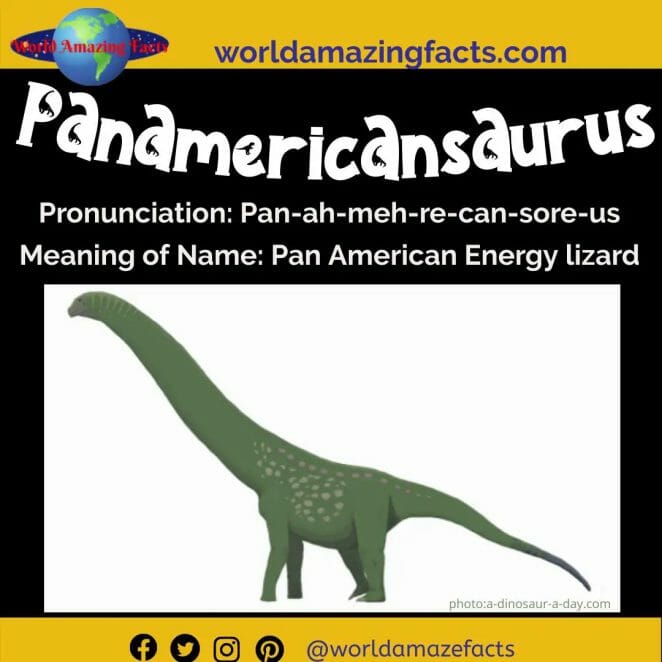 Panamericansaurus is a titanosaurus genus from what is now Argentina. At the end of the Cretaceous epoch, Panamericansaurus lived in this area. Jorge Calvo and Domingo Porfiri described both the genus and its single representative species in 2010.

They believe it is an advanced titanosaur from the Aeolosaurini group, which a subsequent phylogenetic analysis corroborated (Santucci and de Arruda-Campos, 2011).
The generic name Panamericansaurus does not allude to Panama or America, nor does it refer to the political movement (ideas) of Pan-Americanism, as it may appear at first look, but rather to Pan American Energy for its support in the Dino Project ( Proyecto Dino ). It translates literally as “Pan American Energy Lizard.” The Schroeder family of Neuquén was honoured with the genre epithet schroederi for their assistance and support in excavating Pan-Americanosaurus bones from their own property. 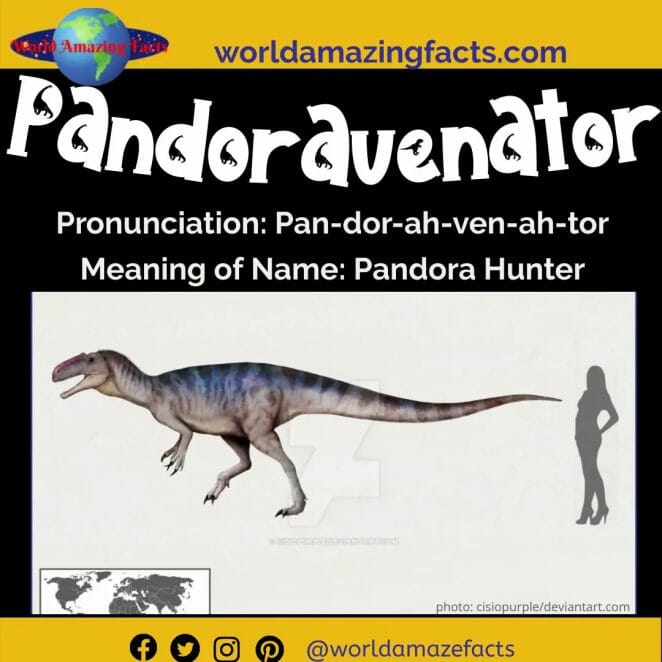 Pandoravenator is a small to medium-sized theropod from Argentina’s Late Jurassic period. One incomplete extracranial skeleton has been discovered. Its systemic position is ambiguous. Oliver Rauhut and Diego Pola, two palaeontologists, described it in 2017.

The name Pandoravenator is derived from Caja de Pandora, the location of the holotype, and the Greek word venator (“hunter”, “hunter”). The genre name honours the Fernandez family, who allowed scientists to do research on their farm. 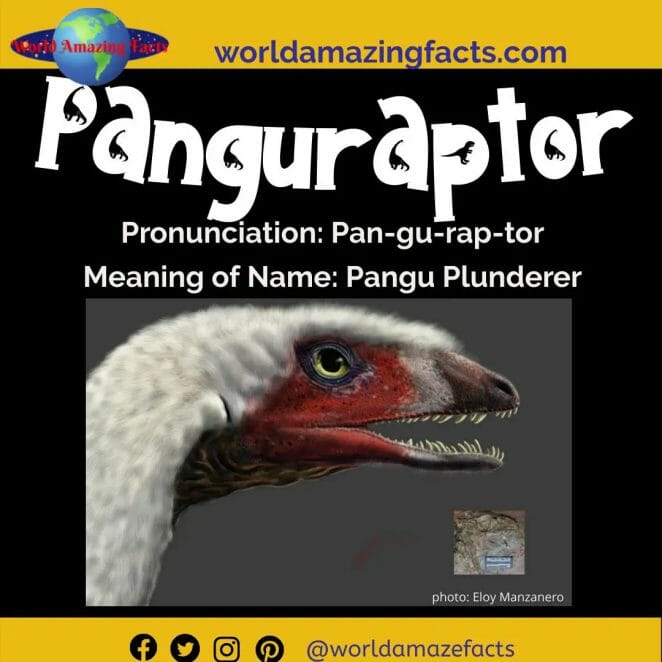 The name Panguraptor derives from the Chinese term Pangu, which means the first living entity and the creator of all reality in mythology. Raptor means “robber” in Latin, and the species name was chosen to honour the country of Lufeng, where the panguraptor and countless other early Jurassic fossils originated. 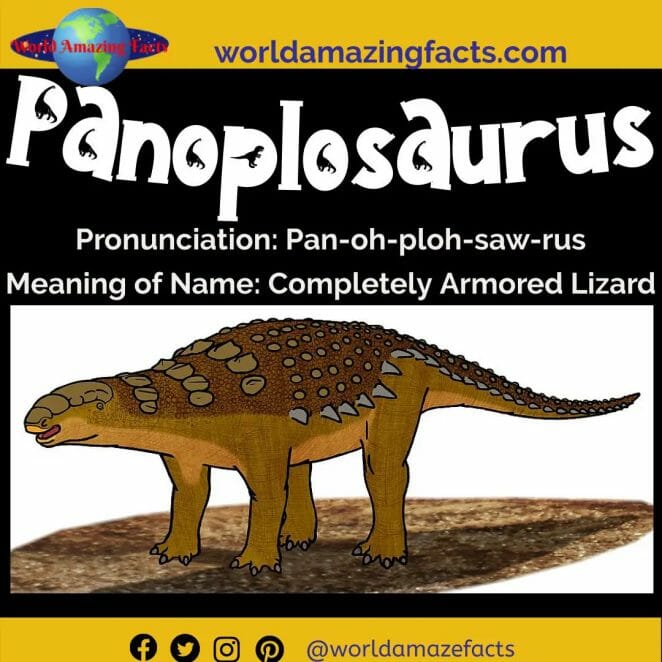 Panoplosaurus was a tank-like ankylosaurus with no bony mace on its tail. Panoplosaurus lived in western North America during the late Cretaceous epoch. It is one of the most well-known nodosaurids, with two fragmentary skeletons and three skulls discovered.

Because of its spiky armour, its name means “completely armoured lizard.” 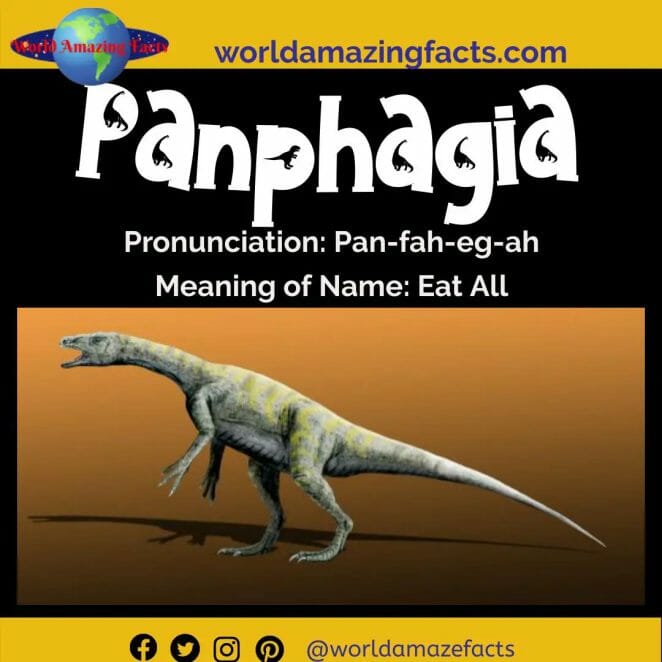 Panphagia protos is an ancient sauropodomorph. Panphagia fossils were discovered in Argentina’s San Juan Province in late 2006. Panphagia can be traced back to the Karnik period ( Late Triassic ).

Panphagia is derived from the Greek words pan (all), phagein (to eat), and a. (referring to). This name can be rendered as “omnivore” in free translation. In turn, the genre term protos alludes to its primitiveness. 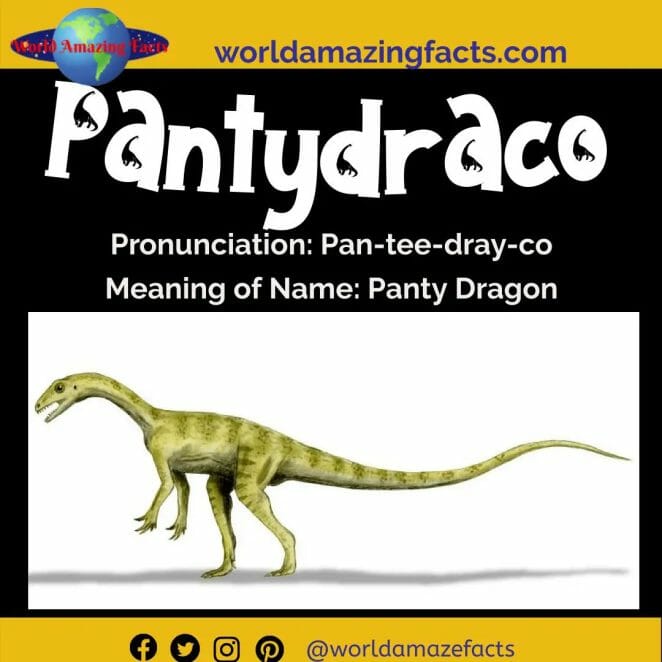 Pantydraco is a kind of early reptile dinosaur that existed in Wales during the Triassic and Jurassic periods. This sauropodomorph most likely moved on its hind legs rather than all fours. Pantydraco is thought to have been omnivorous. Pantydraco’s skull was short and practically triangular. 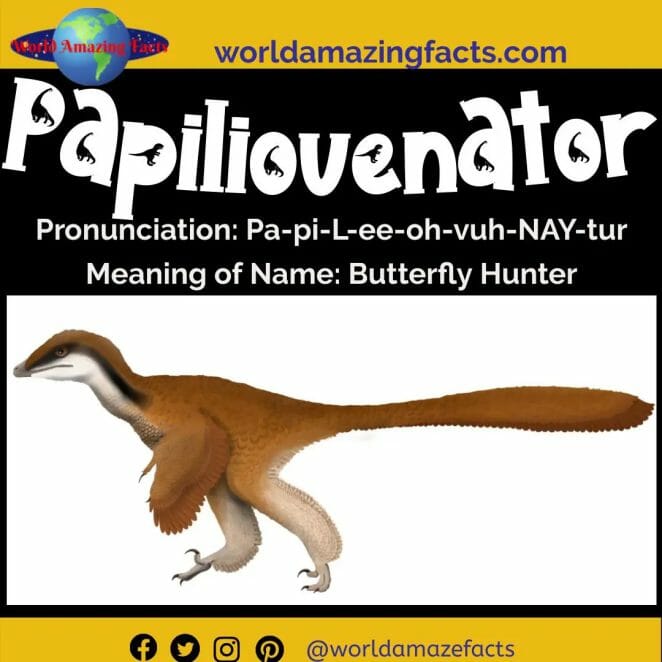 Papiliovenator is a small theropod of the Troodontidae family that lived in what is now Inner Mongolia, China, during the Late Cretaceous period. Given the time era, Papiliovenator was a fairly primitive member of his family.

The name Papiliovenator is derived from the Latin words papilio (“butterfly”) and venator (“hunter”). It refers to the shape of this animal’s nerve arches in the anterior dorsal vertebrae. 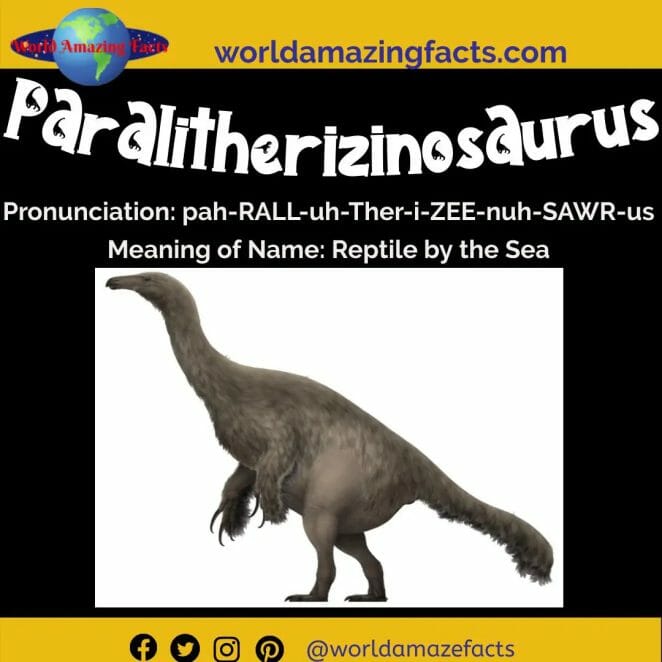 Paralitherizinosaurus is a theropod from the Therizinosauria group that existed in what is now Japan during the Late Cretaceous period. Yoshitsugu Kobayashi and colleagues named it in 2022.

The name Paralitherizinosaurus is derived from the Greek terms paralos (“near the sea”) and therizo (“collect”, “reap”), as well as the Latin word sauros (“reptile”, “lizard”). Japan is referred to by the species epithet japonicus. 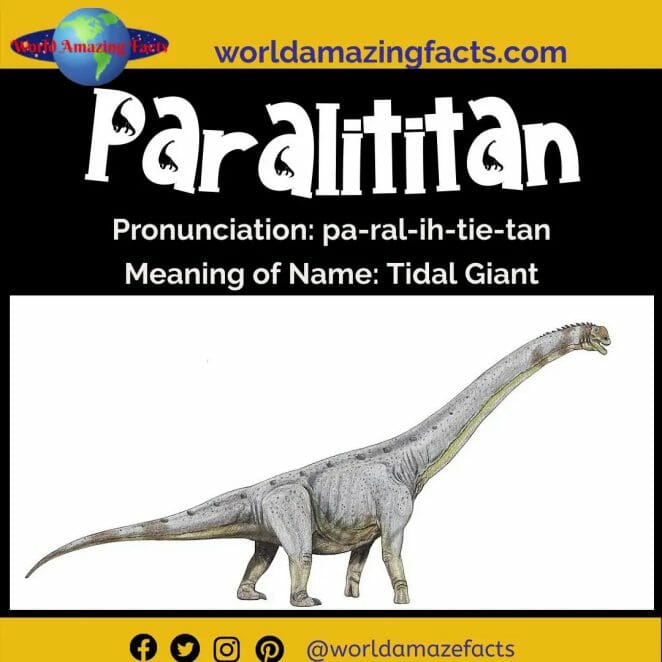 Paralititan is a huge sauropoda from the Titanosauria group. Paralititan lived in modern-day Egypt during the Late Cretaceous period, approximately 99-93.5 million years ago ( Cenomanian ).

The generic name Paralititan is derived from the Greek terms paralos (seaside) and titan (giant from Greek mythology), which translates as “sea giant” in free translation. The genre name honours the German palaeontologist Ernst Freiherr Stromer von Reichenbach (the discoverer of, among others , Aegyptosaurus , Bahariasaurus and Spinosaurus ). 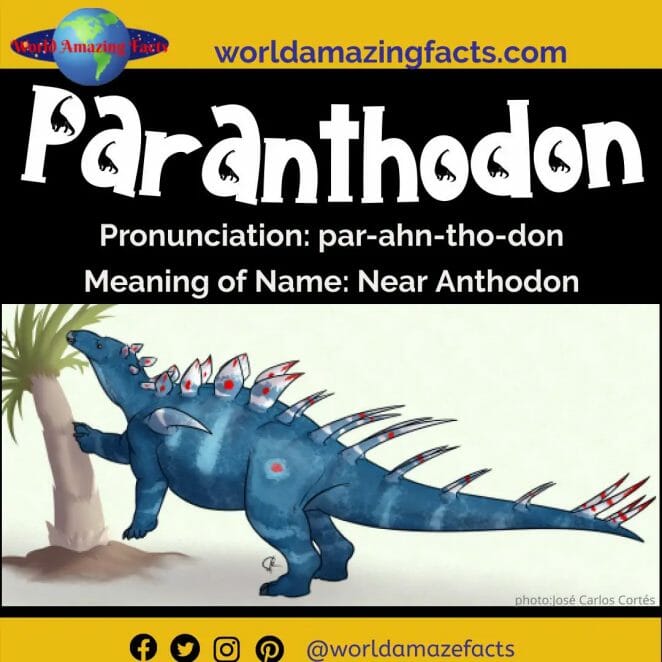 Paranthodon was a kind of Stegosaurus that existed in what is now Southern Africa during the Early Cretaceous period. Because the dinosaur’s fossil evidence is limited, little is known about this animal, which was previously thought to be an Ankylosaurus.

Its generic name translates as “similar to Anthodon.” Anthodon (or leaf teeth) is a form of parejaasauride that was discovered in the same location as the remains of Paranthodon. 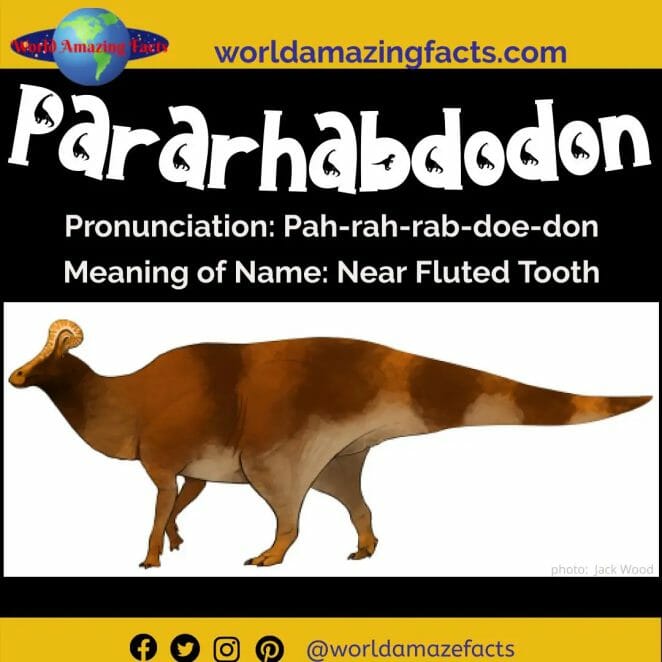 Pararhabdodon is a hadrosauride that lived in Europe during the Late Cretaceous epoch. It was quite small for a representative of this group of dinosaurs. The structure of the maxillary and humerus bones distinguishes Pararhabdodon from other hadrosauroids.

The term pararhabdodon means “similar to Rhabdodon.” Rhabdodon means “fluted tooth” in Greek. The dinosaur was called because it was thought to be a basal iguanodont, like its presumed relative Rhabdodon. 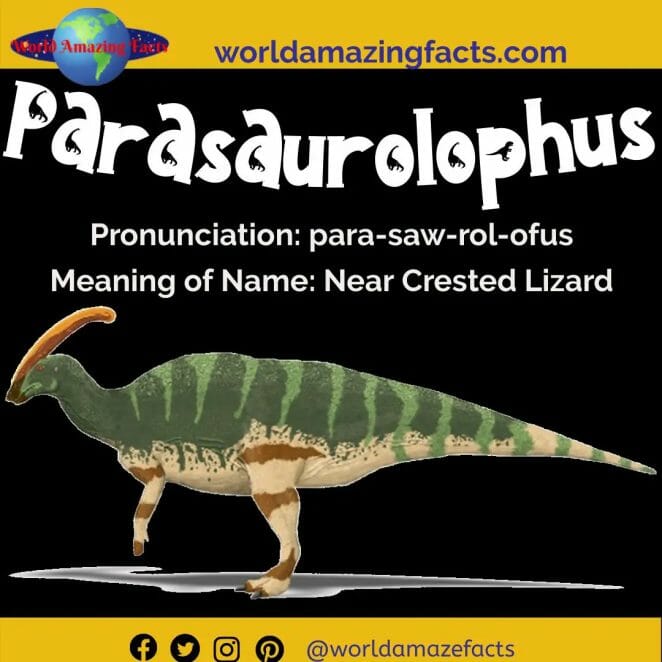 Parasaurolophus is a huge hadrosaurid that lived in what is now the United States and Canada during the late Cretaceous period. Unlike other dinosaurs, it can have up to three species (although one may be female or the other young). It is one among the more well-known dinosaurs, and its most distinguishing characteristic was a long, projecting crest on the rear of the skull.