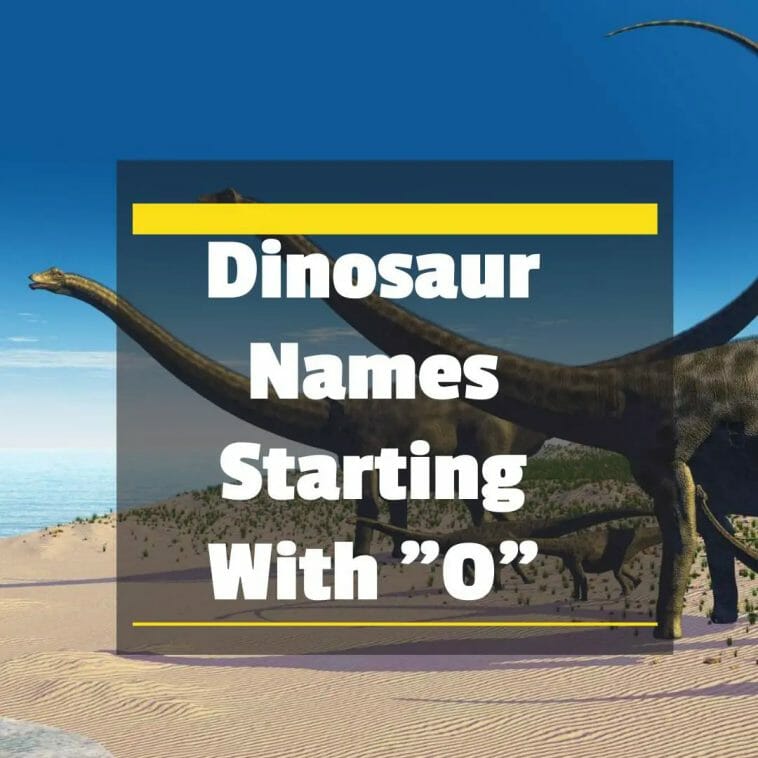 Check out the alphabetical list of dinosaur names beginning with the letter “O”. We’ll look at dinosaur pictures and discuss what their names mean, as well as learn more about dinosaur facts.

Dinosaurs with names that begin with the letter “O”

Contents for Dinosaur Names that Start with “O” 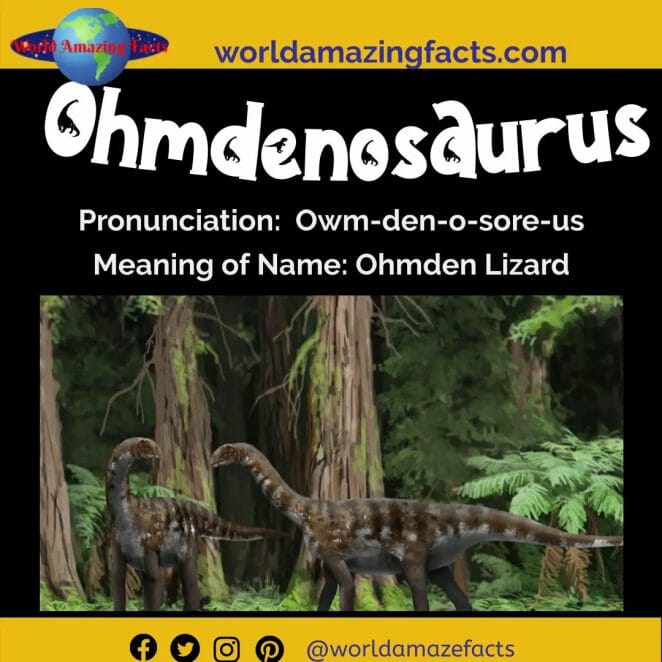 Ohmdenosaurus was a tiny sauropod that lived in what is now Baden-Württemberg, Germany, during the early Jurassic period.

The generic name Ohmdenosaurus means “Ohmden lizard,” after the commune and town in Baden-Württemberg where the dinosaur’s remains were discovered. 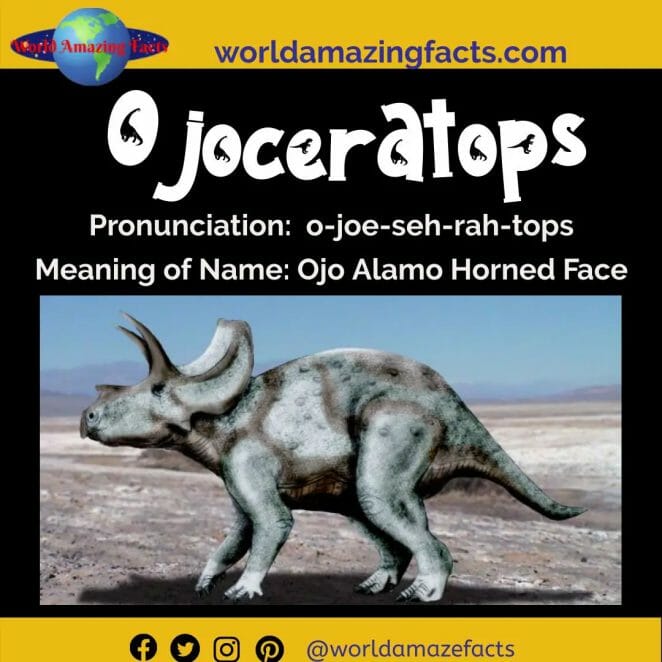 Ojoceratops is a Chasmosaurin genus from North America. Ojoceratops discoveries could be from the genus Triceratops.

The generic name Ojoceratops derives from the name of the formation (full name Ojo Alamo) in which it was discovered, which means “the horned face of Ojo” (Ojo + Greek ceratops). The species epithet (fowleri) honours Denver Fowler, who discovered the holotype, as well as other individuals named after Ojoceratops by the authors of the name. 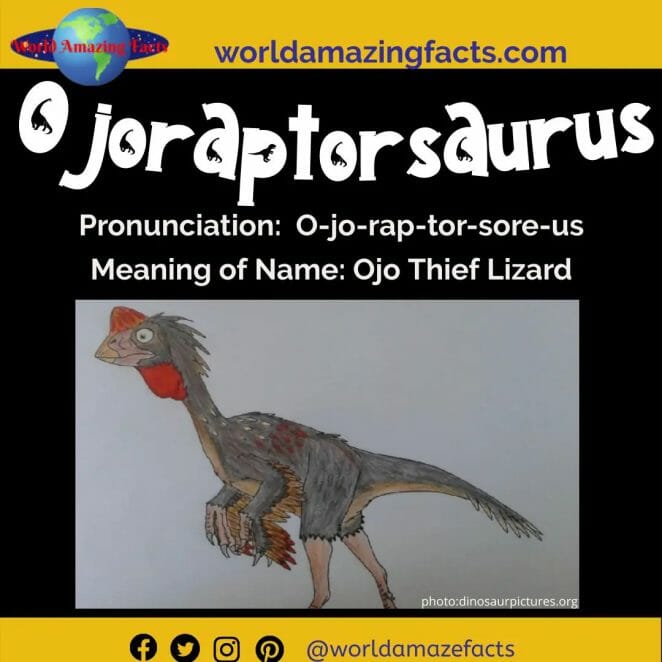 Ojoraptorsaurus is a tiny theropod that lived in North America near the end of the Cretaceous period.

Ojoraptorsaurus is Latin for “lizard-thief from Ojo Alamo.” It derives from the first part of the name of the formation where theropod remains were discovered, as well as the Latin words raptor (“thief”) and saurus (“lizard”). The species name Ojoraptorzaura (boerei) honours Arjan C. Boere, who discovered the holotype. 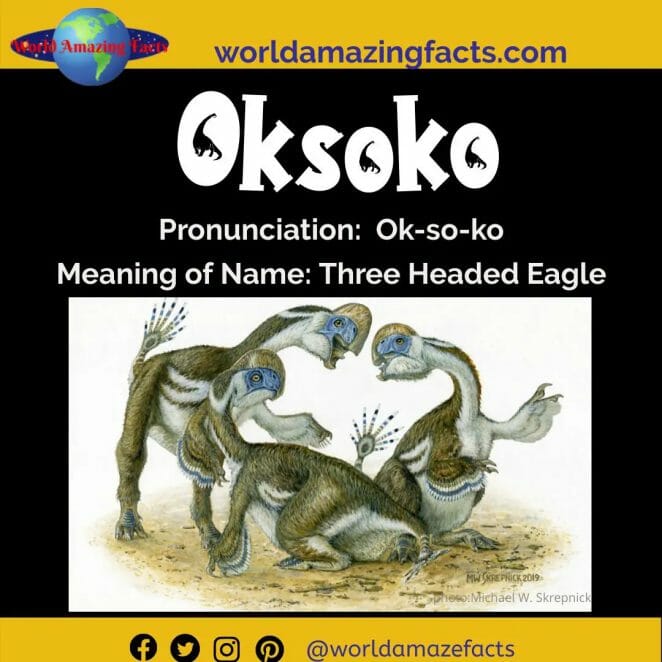 Oksoko is a theropod of the Oviraptoridae family that lived in what is now Mongolia during the Late Cretaceous period. It is famous for housing the nearly entire remains of several Oksoko individuals. Gregory Funston and colleagues named Oksoko in 2020.

The name Oksoko is derived from Altai mythology’s three-headed eagle. This refers to the fact that the holotype was discovered in a deposit that also contained three skulls. In Mongolian, the genre epithet avarsan means “rescued,” referring to the fact that the bones were confiscated from smugglers.

Olorotitan was a Lambeosaurin that lived in today’s Russia during the Late Cretaceous period. Three palaeontologists, Pascal Godefroit of Belgium, Yuri L. Bolotsky of Russia, and Vladimir Alifanov of Belgium, described it in 2003.

The generic name, Olorotitan, means “giant swan” in Latin, which is most likely related to this dinosaur’s extraordinarily long, for a hadrosaurus, “swan” neck. The species name arharensis relates to the Arhara County in Russia, where the dinosaur’s holotype was discovered. 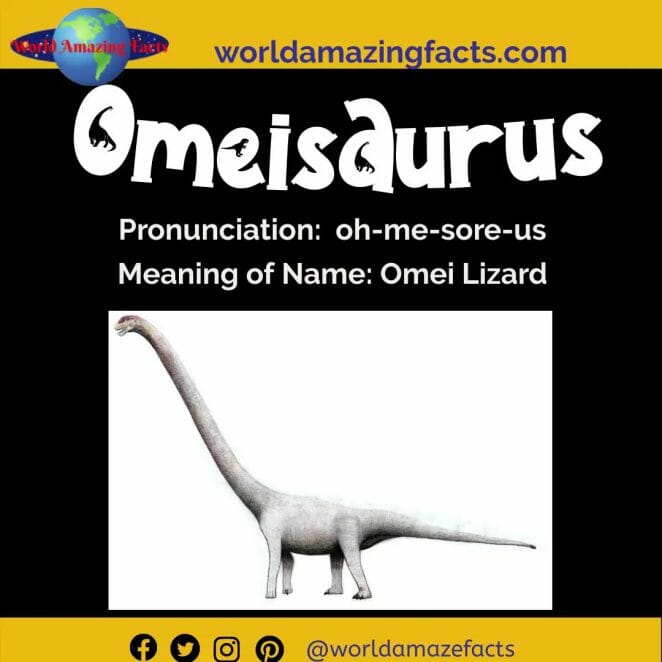 Omeisaurus is a genus of medium-sized to fairly big sauropoda from the Mamenchisauridae family that existed in today’s China during the Middle Jurassic period. Omeisaurus possessed an unusually long neck, as befitting a member of this family. Scientists named at least ten Oomeisaura species beginning in 1939.

The Emei Shan (Omeishan) mountain range, one of Buddhism’s four sacred mountains, inspired the name Omeisaurus. The second component of the name is derived from the Greek word sauros (“reptile”, “lizard”).

Ondogurvel is a member of the Parvicursorinae clade that lived in the Late Cretaceous area of what is now Mongolia’s Gobi Desert. Alexander Averianov and Alexey Lopatin described it in 2022.

Ondogurvel is derived from the Mongolian words ondo (“egg”) and gurvel (“lizard”). The genre name honours Vladimir Alifanov, who discovered the dinosaur’s remains in 1999. 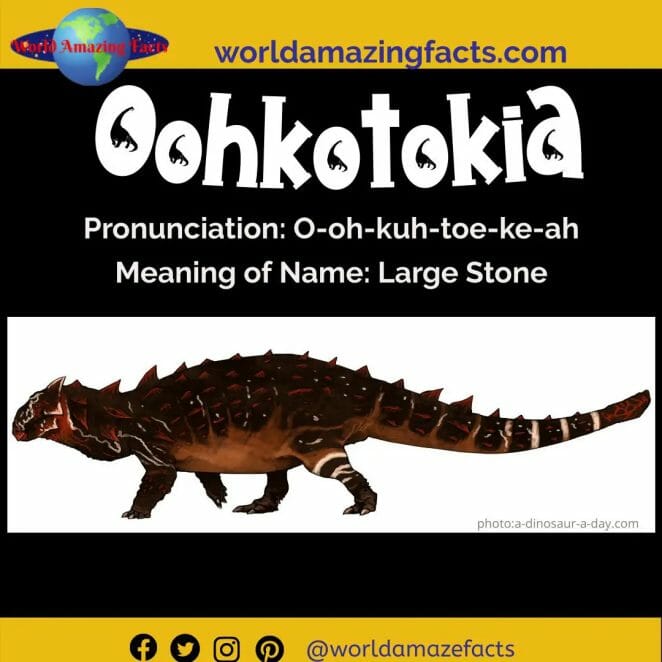 Oohkotokia horneri is an advanced ankylosaurus whose fossils were unearthed in the United States.

The generic name Oohkotokia is derived from the word ooh’kotoka, which is derived from the Blackfoot Indians’ (Siksika) language and means “huge stone” or “rock.” The Latin ending – ia denotes origin, hence the full name Oohkotokia means “child of stone” / “child of rock” and alludes to this dinosaur’s carapace. The species name horneri recognises one of our time’s most recognised palaeontologists, John Horner, for his contribution to the study of dinosaurs from Montana. 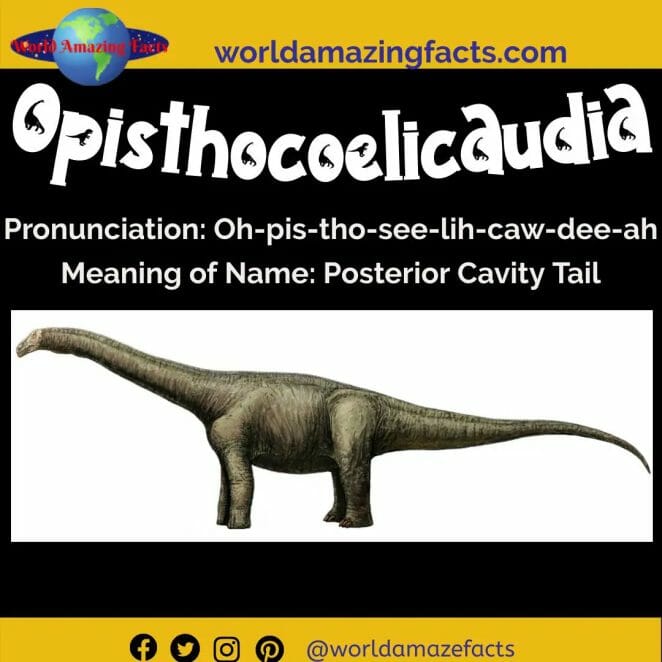 Opisthocoelicaudia is a Titanosaurus genus that lived in what is now Mongolia during the Late Cretaceous epoch. Some experts believe it is a junior synonym for Nemegtosaurus.

The generic name translates as “back-concave caudal vertebrae,” while the genre name honours Wojciech Skaryski, a Polish palaeontologist who took part in up to six missions to Mongolia. 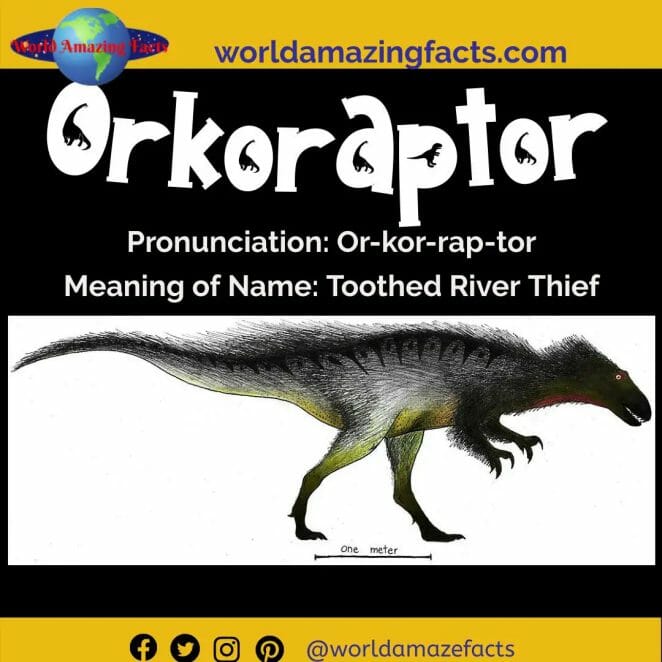 Orkoraptor is a medium-sized theropod reported in 2008, with remains discovered in Argentina’s Pari Aike Formation.

The generic name is derived from the words Orr Korr (the name of the river La Leona in the Aoniken tribe’s native language) and Latin. raptor – thief. Coleman Burke, an American amateur geologist and palaeontologist known for his passion for Patagonian extinct fauna, is honoured by the genre’s name. 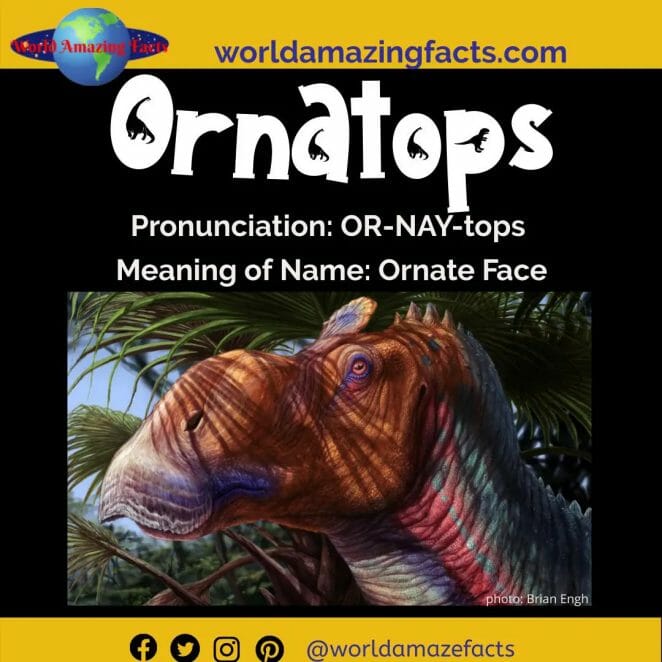 Ornatops is a flat-headed hadrosaurid belonging to the Brachylophosaurini group. McDonald and colleagues described it in 2021.

The name ornatops is derived from the Latin ornatus (“decorative”) and the Greek ops (“face”). It alludes to the shape of the seam between the nasal and frontal bones, which resembles a crest on the skull. The genre descriptor incantatus means “enchanted” and refers to New Mexico’s widespread nickname, “the land of spells.” 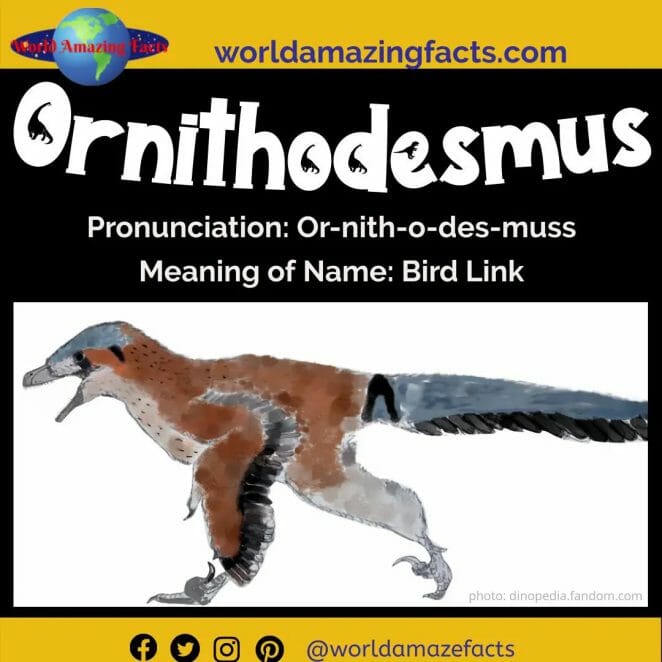 Ornithodesmus is a poorly characterised dromeosaurid that lived in contemporary England during the early Cretaceous period. As with many other long-known dinosaurs, scientists struggled to identify its remains – Ornithodesmus was initially characterised as a bird, then as a pterosaur for many years.

The name Ornithodesmus is derived from the Greek words ornith (“bird”) and desmos (“link”). 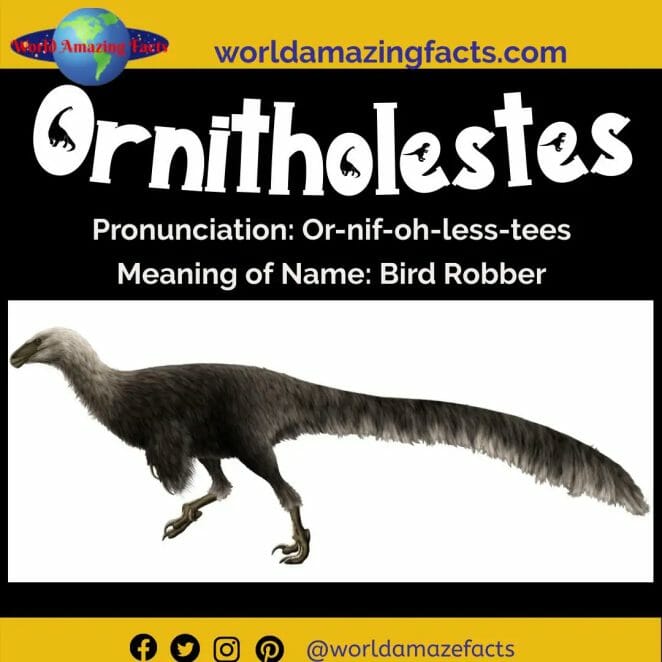 Ornitholestes is a tiny Celurosaurus that lived in the United States during the Late Jurassic period (155-151 million years ago).

It is widely assumed that Ornitholestes hunted tiny vertebrates, as its name implies (“bird bandit”) (and the species epithet was created in honour of the American Museum of Natural History prep, Adam Hermann, for his major contribution to vertebrate palaeontology). 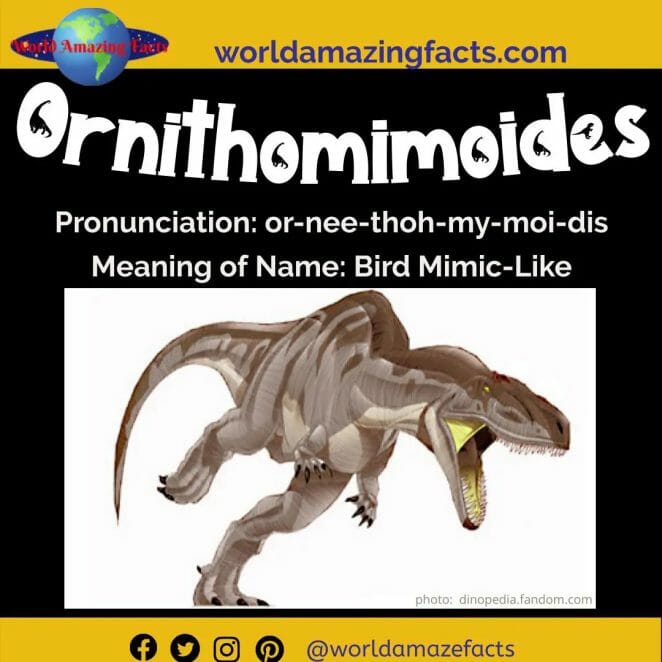 Ornithomimoides is a questionable theropod genus of the Noasauridae family that lived in what is now India during the Late Cretaceous (Maastrichtian) (the Lamet Formation ). Von Huene and Matley described two species, O. barasimlensis and O. mobilis, in 1933.

Both taxa’s fossil material had multiple vertebrae, which the authors of the description thought to be dorsal vertebrae. Novas (2004) discovered that these are caudal vertebrae, comparable to those found in other Abelisauroids. Novas judged Ornithomimoides to benomen dubium in the lack of autosuit.
The term Ornithomimoides is derived from the Latin word -oides, which means “like.” Ornithomimus-like creature. The species name refers to the Bara Simla Hill in Jubbulpure, India. 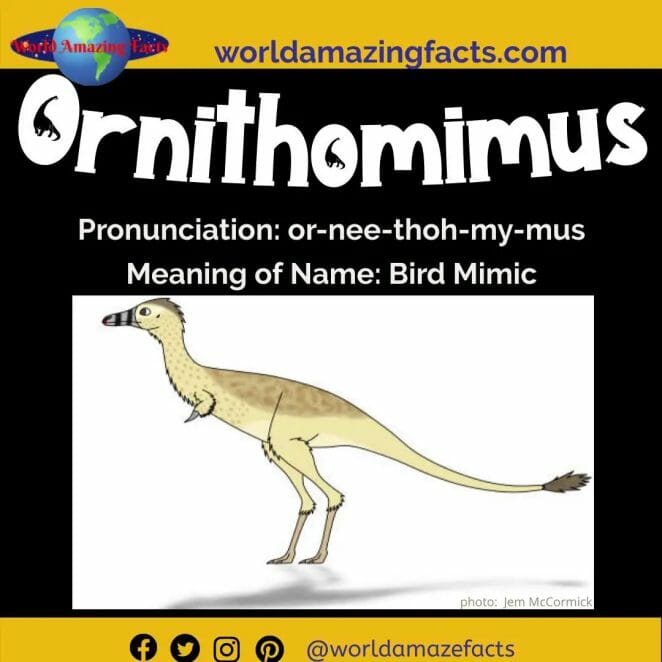 Ornithomimus is a well-known ostrich-like dinosaur and one of the family’s final and most sophisticated members. Ornithomimus lived during the Late Cretaceous period in western North America. The overall structure is similar to that of other advanced Ornithomimosauria representatives.

The word Ornithomimus means “bird imitator.” The ornithomim, first described by Marsh in 1890, gave rise to the Ornithomimidae family and the Ornithomimosauria group. 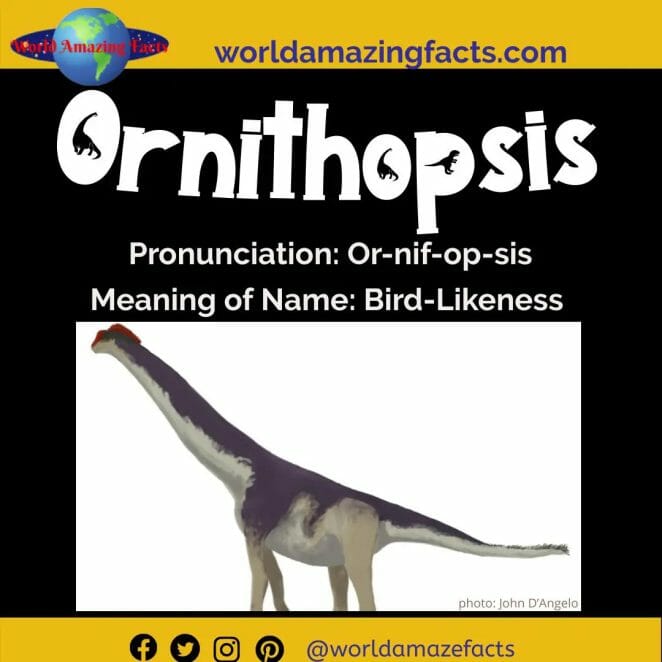 Ornithopsis is one of the sauropods that was written about in the nineteenth century, but nothing is known about it.
We don’t know whether it’s a significant genus, what its formal issue is with other species (apart from the common one, which is similarly fraught with uncertainty), and ultimately, what its systematic position is.

The generic name Ornithopsis means “bird-like” and is a misreading of the description’s originator, Harry Seeley. In turn, the genre epithet hulkei is likely to honour John Hulke, who described, among other things, other species of ornithops that are today classified as sauropods. 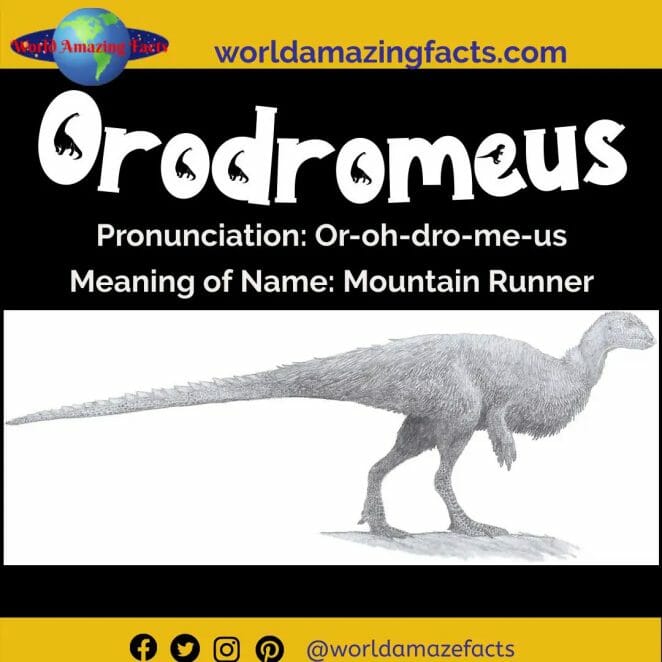 Orodromeus is a tiny parksosaurid whose name means “mountain runner.” Horner and Weishampel described the solitary species of this genus, Orodromeus makelai, in 1988.

This dinosaur’s name is derived from the Greek words oro (mountain) and dromeus (runner). It alludes to the location of the fossils – a specific mountain – as well as the light structure of the orodrome and its long forelimbs. Donald Baird proposed this name. 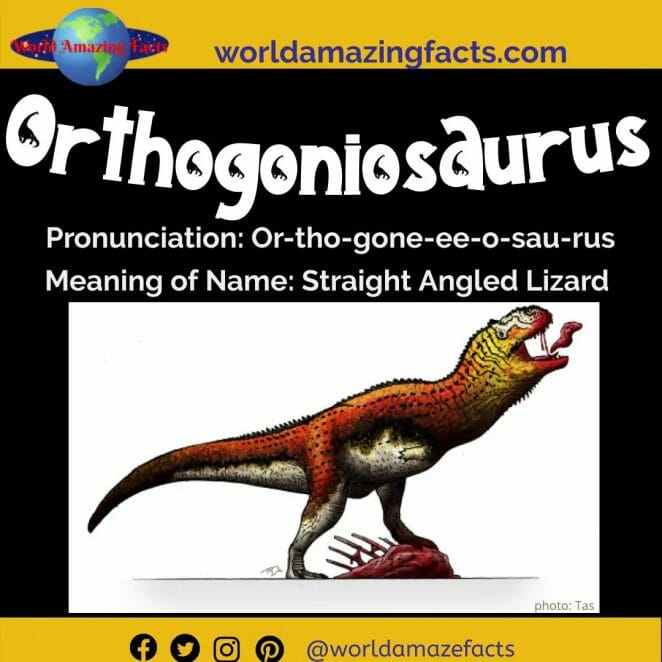 Orthogoniosaurus was a Late Cretaceous theropod that lived in what is now central India. The holotype is a single 27-mm tooth recovered in Late Maastrichtian strata near the city of Jabalpur.

Due to the scarcity of its fossils, this reptile has been confused with other carnivores discovered in the Lameta Formation, such as Indosuchus and Indosaurus. Because it lacked diagnostic traits, Orthogoniosaurus was considered a nomen dubium. However, Ralph Molnar noted in 1990 that the exposed tooth possessed a leading edge found only in Ceratosaurus.

Another grade known solely from a single tooth was included in this category – O. rawesi is an abbreviation for rawesi. It is from India’s Takla Formation. It was also assigned to the Megalosaurus and Massospondylus genera. Carrano et al. (2012) classified it as a theropod and noticed similarities to abelisaurid teeth.