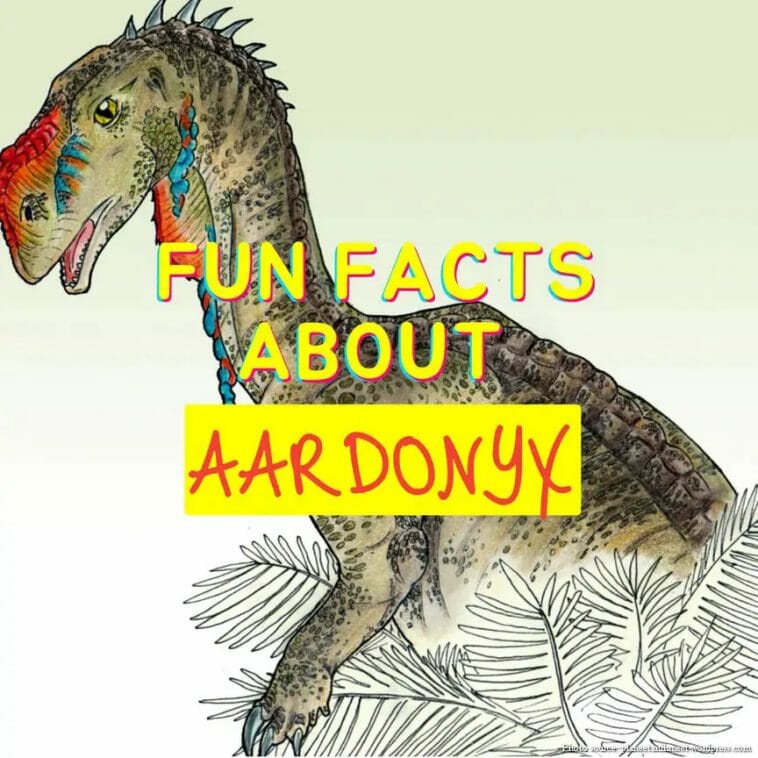 The Aardonyx dinosaur was known for its herbivorous behaviour. During the Early Jurassic period, it existed in what is now South Africa. Its fossils have been discovered in locations like Free State (South Africa). Aardonyx has a small head and a long, thin neck. It stood mostly on two legs, but could also walk on four. It had a broad, barrel chest. It measured 20 feet by 6 feet. It was half a tonne in weight.

The genus Aardonyx is known only from two young specimens. Adults would have been significantly bigger, possibly over 10 metres tall. Continue reading for more fun facts about the Aardonyx dinosaur.

Contents for Fun Facts about Aardonyx

2: What does the name Aardonyx mean?

Aardonyx celestae – the genus name (Aardonyx) means “Earth Claw,” referring to the enormous, earth-encrusted foot claws that were among the earliest bones recovered. Celeste Yates, who processed a large portion of this fossil, is credited with the species name (celestae).

The Aardonyx dinosaur was a plant-eating theropod that existed during the early Jurassic period and was more of a transitional form between basal sauropodomorphs and sauropods. To survive, the Aardonyx ate small plants, leaves, trees, and herbs; these forms of food were abundant in its surroundings at the time.

Paleontologist Adam Yates and his colleagues originally described the dinosaur in 2010. The genus name comes from the Afrikaans word “aard” which means “land” and the Greek word “onyx” which means “claw.” Celeste Yates, who discovered and prepared the majority of the initial fossils of this species, is honoured with the species name.

The bones came from a single small yet thick bone bed known as Marc’s Quarry. Marc’s Quarry is one of numerous sites on the farm Spion Kop, which is part of a complex game farm in the Senekal District of the Free State, South Africa.

6: When was the Aardonyx alive?

The Aardonyx is a sauropod dinosaur genus that existed between 183 and 200 million years ago in what is now South Africa during the early Jurassic period.

7: What kind of climate did Aardonyx inhabit?

Aardonyx lived in a dry desert with oasis and streams.

8: What was Aardonyx’s height and weight?

Aardonyx is a kind of sauropodomorpha dinosaur. That is a lizard-hipped dinosaur with a long neck and small head that eats plants. Sauropodomorpha comprises both the well-known enormous quadrupedal sauropods and a variety of more basic forms that don’t appear to have lasted through the Early Jurassic.

Although it appears to be more closely linked to them than most other non-sauropod sauropodomorphs, Aardonyx is classified as a primitive member of the group and is omitted from Sauropoda (at least according to some classifications).

10: What are Aardonyx’s unique skeletal features?

Aardonyx’s skeletal anatomy resembles that of sauropods in several ways. The dinosaur’s skull and jaws suggest that it had a large gape and could bulk-browse, just like sauropods later did. The forelimbs are shorter than the hindlimbs, implying that Aardonyx was a biped.

11: Is Aardonyx considered a transitional dinosaur?

Aardonyx is a particularly unique sauropodomorph because it marks the transitional phase between bipedal ancestors and quadrupedal descendants. Aardonyx is a dinosaur that exists between the two types. Aardonyx is hypothesised to have evolved into the huge sauropods, which were 40 metres long and weighed over 100 tonnes. They were bipedal rather than quadripedal, and far smaller than sauropods.

This shift is particularly noticeable when looking at the legs, which exhibit adaptations for a slower but more forceful walking style. These adaptations, together with a shift toward quadrupedal weight bearing, would allow sauropods to reach extremely massive sizes.

12: Why is Aardonyx considered a new species?

Aardonyx has a number of characteristics that separate it from all other known basal sauropodomorphs. Features of the head, neck, forearm, and foot are among these distinguishing characteristics. The nostril’s seemingly massive bony hole is particularly prominent within the skull.

Other remarkable features of the skull include the comparatively small size of the primary blood vessel and nerve openings on the maxilla bone, as well as a very deep, clearly defined groove on the interior of the maxilla.

All of this suggests that, while being midway between more typical prosauropods and basic real sauropods, Aardonyx had been doing enough of its own development since splitting from the sauropod line and had accumulated a slew of strange traits that make it instantly recognisable.