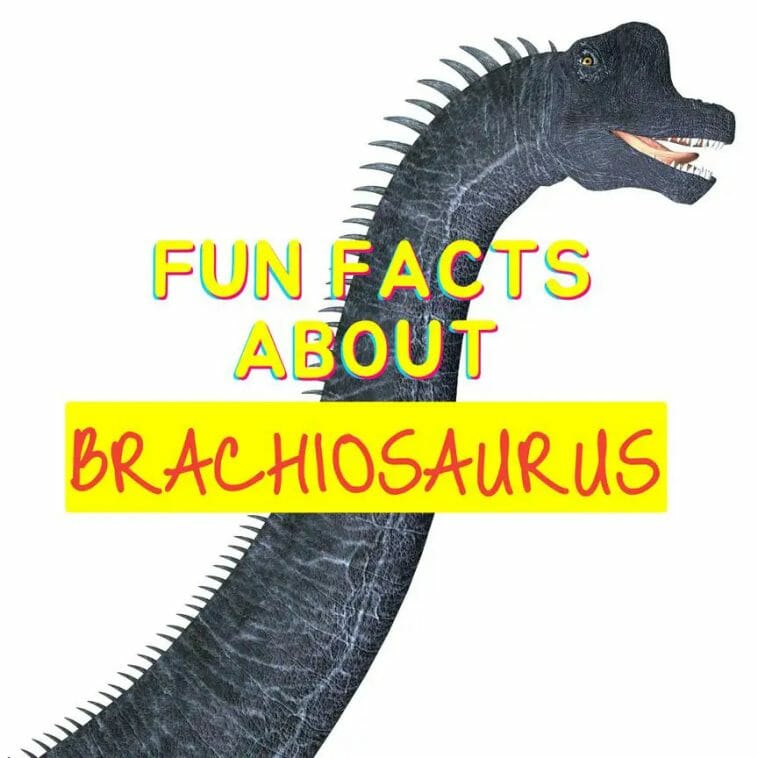 Brachiosaurus was a giraffe-like dinosaur with a long neck and tail that lived in North America during the late Jurassic Period, 155 million to 140 million years ago. It is remains one of the most popular dinosaurs in the world thanks to its appearance in Jurassic Park.

Contents for Fun Facts about Brachiosaurus

Brachiosaurus was a sauropod dinosaur. Sauropods are known for their massive size, long necks, and long tails. Brachiosaurus, unlike the Sauropods, had a peculiar sloping stance due to its long front legs and small tail. Brachiosaurus possessed strong legs that could bear its large body and bulky neck. Brachiosaurus had a small head at the end of its long, giraffe-like neck.

Despite its little size, the head was large enough to accommodate the enormous nostrils. According to some, Brachiosaurus possessed a highly keen sense of smell. It had spoon-shaped teeth, unlike most other sauropods, which had peg-shaped teeth. Brachiosaurus also had longer front legs than hind legs, making its shoulders higher than its hips, unlike most other sauropods. That meant its neck would have risen from its torso like a giraffe’s. Its body would have a downward slope to its tail.

3: What does the name Brachiosaurus mean?

Brachiosaurus, or “Arm Lizard,” was a sauropod dinosaur genus that existed during the Late Jurassic Period. Its name comes from the Greek words brachion, which means “arm,” and sauros, which means “lizard.” Because its forelimbs were longer than its hind limbs, it was given this name.

4: How do you pronounce ‘Brachiosaurus’?

The name “Brachiosaurus” is pronounced “BRAK-ee-oh-sore-us.”

5: What is the nickname of Brachiosaurus?

Brachiosaurus is known as the “arm lizard” because of its lengthy arms. Brachiosaurus is notable for its long neck and short hindlegs, which gave it a giraffe-like appearance. Because this dinosaur’s front legs are so considerably larger than its back legs, Mr. Riggs named it Brachiosaurus, which means “arm lizard.”

6: What did Brachiosaurus eat?

The Brachiosaurus had a wide nose and strong jawbones with spoon-shaped teeth that were suited for stripping and extracting vegetation. Conifers, ginkgoes, and cycads were most likely eaten by Brachiosaurus.

Because their teeth were specialised for removing material rather than dividing off large chunks, these dinosaurs are thought to have swallowed entire plants. They tended to wander in herds. A herd of Brachiosaurus would usually leave an area after consuming all of the plants. It was estimated that they consumed 440-880 pounds of plant materials per day (200-400 kg).

In 1900, the first Brachiosaurus fossil was discovered in Grand River Valley, Colorado. Elmer Riggs, the palaeontologist who unearthed this incomplete skeleton, called it Brachiosaurus in 1903.

8: When was the Brachiosaurus first discovered?

Elmer S. Riggs discovered the first Brachiosaurus in the Grand River Canyon in western Colorado in the United States in 1900.

9: Where was Brachiosaurus found?

10: When was the Brachiosaurus alive?

11: What kind of climate did Brachiosaurus inhabit?

Dinosaur habitats are estimated by palaeontologists using the sorts of sediment they find and the climate at the time they lived. According to these methods, Brachiosaurus dinosaurs lived in semiarid areas, such as flat plains. Archeological evidence indicates that the regions also experienced extreme dry and wet seasons each year. They used to stand in lakes, rivers, and ponds to cool off and relax in the hot climate while they were terrestrial. They could potentially live on floodplains that are flat.

12: What was Brachiosaurus’s height and weight?

For decades, the Brachiosaurus was thought to be one of the largest dinosaurs known to humans. Brachiosaurus is thought to have been between 18 and 30 metres (59 and 98 feet) in length and weighed between 33 and 55 tonnes, which is about the same as 12 African elephants. It featured a long neck, a tiny skull, and a big overall size, all of which were typical of sauropods.

13: Is Brachiosaurus the biggest dinosaur?

When it was discovered in 1903, the largest dinosaur ever discovered was Brachiosaurus, although other sauropods are now thought to be bigger and heavier than Brachiosaurus. Argentinasaurus and Amphicoelias, for example, could have reached one and a half to two times the size of Brachiosaurus.

14: How fast could a Brachiosaurus move?

Brachiosaurus walked on all four legs, making it a quadrapedal dinosaur. Because of its size, it was presumably unable to move as quickly. Many estimates put the speed around 6-10 mph.

15: Can a Brachiosaurus swim?

Brachiosaurus couldn’t swim because it was so heavy. Instead, it took to the lake and riverbeds. In the hot temperatures of semiarid zones, it would frequently enter water bodies for a swim to cool off. Its nostrils were high on the head, leading experts to conclude it could have lived or swum in water.

16: How did the Brachiosaurus protect itself?

Brontosaurus was able to defend its head and neck from assaults by the greatest carnivores of the late Jurassic epoch due to its larger than average skull.

The enormous tail resembling a bullwhip acted as an effective defensive weapon against attacks from predators. They also featured formidable claws on their feet, which might have been utilised to defend themselves against potential predators.

17: How did Brachiosaurus walk?

Brachiosaurus walked on four legs, and unlike most other sauropods, possessed long forelimbs that caused its back to tilt. Brachiosaurus had giraffe-like front legs and a long neck that allowed it to grow to a height of 40-50 feet (12-16 metres).

18: Did Brachiosaurus have any predators?

For a fully fledged adult Brachiosaurus, there were most likely no predators. The largest known meat-eaters of the time were Allosaurus, Ceratosaurus, and Torvosaurus, which lived in Africa and North America. Some scientists believe that larger dinosaurs, such as the Allosaurus, may have eaten some Brachiosaurus.

19: How many teeth did a Brachiosaurus  have?

The herbivorous diet of Brachiosaurus was well-suited to its spatulate teeth (which looked like chisels). It featured chisel-like teeth, nostrils on the top of its skull, and huge nasal holes, indicating that it had a good sense of smell like other Brachiosaurids. Brachiosaurus possessed a total of 52 teeth in the front of its mouth, with 26 on the upper jaw and 26 on the bottom.

20: Why is the finding of Brachiosaurus significant?

Although Brachiosaurus is a rare dinosaur, we have enough knowledge about it to have learnt a lot about it and dinosaurs in general. The cooling ability of Brachiosaurus air sacs, for example, offered crucial evidence that dinosaurs can have an endothermic metabolism.

We also know from Brachiosaurus’ giraffe-like traits that, despite millennia of separation between two species, we may learn a lot about the more distant one by comparing their astonishingly similar features.

These huge reptiles were thought to be warm blooded rather than cold blooded like most reptiles. Scientists were able to ascertain this by studying the teeth of these creatures and using the ratios of specific isotopes to calculate the dinosaur’s body temperature.