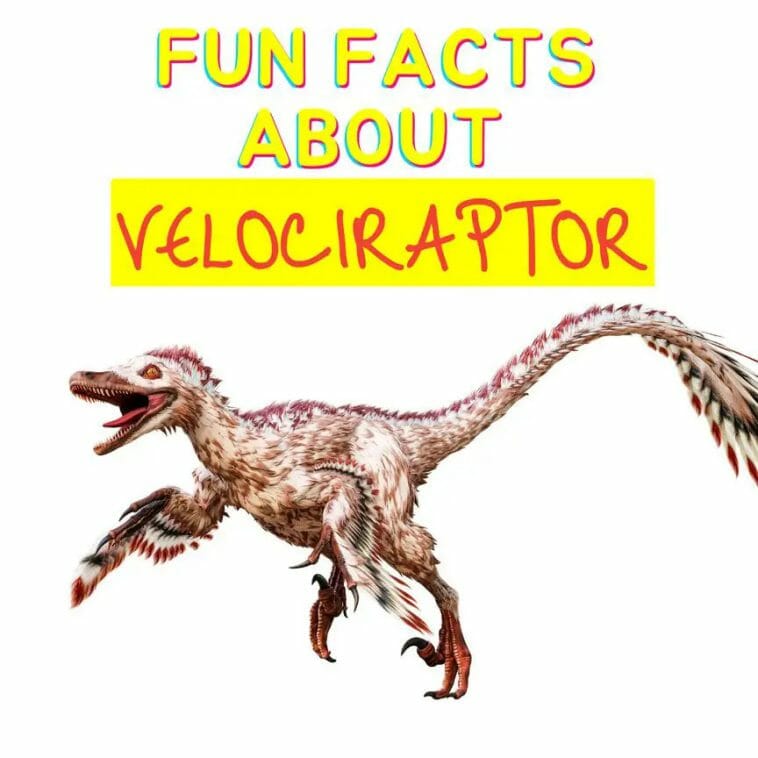 During the Cretaceous Period, Velociraptor inhabited the Earth between 74 million and 70 million years ago. Velociraptors, sometimes known as raptors, are well-known dinosaurs with a fascinating natural history. They were described as the smallest raptor dinosaurs.

They were quick and agile in jumping, running, and hunting thanks to their slender legs and S-shaped neck and spine. This dinosaur was also depicted in the Jurassic Park films, however the portrayal was wrong.

Continue reading this post to learn more fascinating facts about the Velociraptor.

Contents for Fun Facts about Velociraptor

Velociraptor was classified alongside many other dinosaurs with comparable foot structures. The Velociraptor was an odd-looking dinosaur. It’s almost like a big bird, but without the ability to fly. It had a lot of feathers that ran all the way down its tail. Velociraptor, on the other hand, lacked a beak and instead had a small, muscular jaw packed with razor-sharp teeth.

3: What does the name Velociraptor mean?

4: How do you pronounce ‘Velociraptor’?

The word ‘Velociraptor’ is pronounced’vel-OSS-ee-rap-tor.’

5: What is the nickname of Velociraptor?

The nickname for Velociraptor is ” quick plunderer.” The speed with which this dinosaur hunted its prey gave it its name. Dromaeosaurs, or “terrible-clawed lizards,” are a type of dinosaur. Raptors is the common name for them.

Peter Kaisen unearthed the first Velociraptor fossil during the American Museum of Natural History’s first excursion to the Outer Mongolian Gobi Desert in August 1923. The fossil consists of a smashed but intact skull and a toe claw.

7: Who named the Velociraptor?

Henry Fairfield Osborn, president of the American Museum of Natural History, named Velociraptor in 1924. He chose the name, which is derived from the Latin words “velox” (quick) and “raptor” (robber or plunderer), as an accurate description of the dinosaur’s survival strategies.

8: Where was Velociraptor found?

9: What did Velociraptor eat?

Small dinosaurs, reptiles, insects, mammals, and amphibians were all part of the Velociraptor’s diet. Its diet included herbivorous dinosaurs like Protoceratops. Hadrosaurus may have been hunted by Velociraptor as well.

Velociraptor was a carnivorous dinosaur that frequently preyed on smaller creatures. Scientists believe it ambushed its prey from a hidden place. It then pursued them when they attempted to flee. Additionally, Velociraptor hunted larger dinosaurs in packs. Apart from hunting, Velociraptors were likely to engage in scavenging.

10: When was the Velociraptor alive?

Scientists have found that Velociraptors lived on Earth between 74 and 70 million years ago. The Late Cretaceous age was during this time. The area of Central Asia was home to these dinosaurs.

11: What kind of climate did Velociraptor inhabit?

The Velociraptor inhabited a desert-like environment with streams, trees, and bushes. Fossils of Velociraptor have been discovered in what is now known as the Gobi Desert, which spans sections of southern Mongolia and northern China.

12: What was Velociraptor’s height and weight?

The skull of a Velociraptor was huge for its size, with a long, extended snout. Both the upper and lower jaws have rows of 52 to 56 serrated teeth, which were great for shredding the flesh from victims. The velociraptor’s powerful rear legs resulted to an inflexible, fused tail that helped balance while hunting. Velociraptor is thought to have been a fast and agile herbivore predator.

13: Was Velociraptor an intelligent dinosaur?

In comparison to other dinosaur species, Velociraptor had a very large brain, making it one of the most intelligent dinosaurs. The Velociraptor possessed superb hearing, a strong sense of smell, and binocular vision, according to evidence found in dinosaur skeletons.

The tight ear drum stretched through a notch in the dinosaur’s skull and middle ear bones. Crocodiles and birds, both dinosaur relatives, have excellent hearing, so it’s no surprise that dinosaurs did as well. The enormous olfactory lobes and nerve endings on the outside of the Velociraptor’s skull indicate that the dinosaur’s snout was very sensitive to touch and smell. Binocular eyesight, like that of other carnivores, allows the Velociraptor to hunt and capture prey in three dimensions.

14: What are the most well-known Velociraptor fossils discovered?

The “Fighting Dinosaurs” fossil, discovered in 1971, is one of the most renowned Velociraptor fossils ever discovered. The astonishing discovery revealed that Velociraptor perished while grasping Protoceratops’ head.

Both dinosaurs died while trapped together. Both the Velociraptor and the Protoceratops are considered to have died around 80 million years ago in Mongolia’s Gobi Desert.

15: How did Velociraptor walk?

Velociraptor was a bipedal (two-footed) dinosaur. It went quite fast, over 20 mph, on its hind legs. Some scientists believe it was capable of reaching speeds of up to 40 mph in brief bursts. Its incredible running speed more than compensated for the fact that its forelimbs were too short to fly. A counterbalancing effect is thought to have been given by the tail.

16: How fast can Velociraptor run?