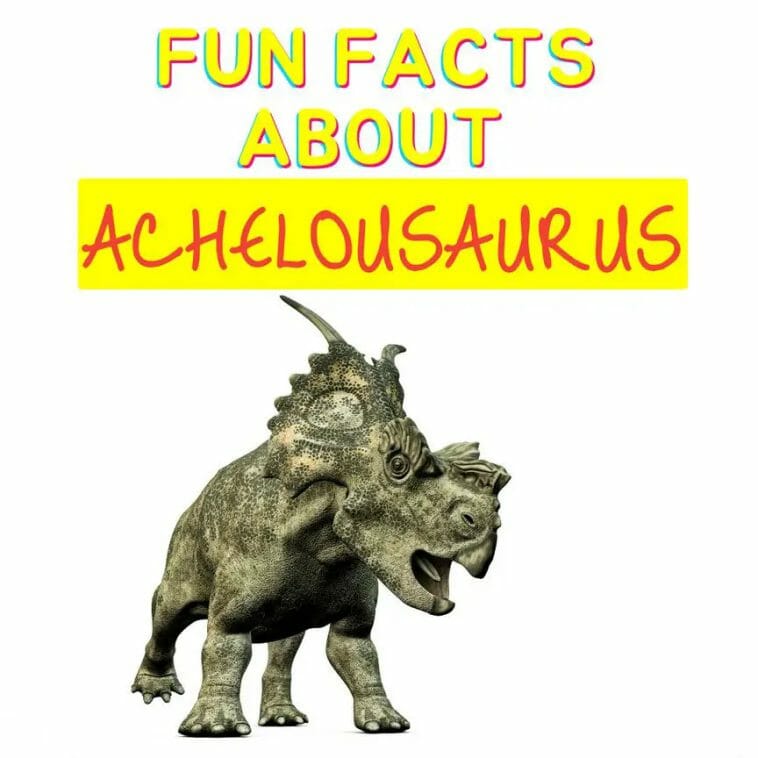 Achelousaurus was a dinosaur that ate plants. It lived in North America during the Late Cretaceous epoch. Its remains have been discovered in places like Montana. Achelousaurus belonged to the Ornithischia (“bird-hipped”) dinosaur order. This suggests that, while Achelousaurus was not closely related to birds, its pelvic bones were comparable in morphology.

Contents for Fun Facts about Achelousaurus

The best way to describe this species as a whole is by looking at the skulls and bones of both adults and young animals. The Achelousaurus skeleton showed that it was a normal-sized Ceratopsid from the Late Cretaceous period. Their big head was paired with a neck frill with spikes that were not as curved outwards as those of the Pachyrhinosaurus, but were more pointed outwards than the Einiosaurus’ spikes, which were curved inwards.

One thing that makes these dinosaurs stand out is that they don’t have horns like other Ceratopsids do. Instead, they have a heavily pitted boss on top of their nasal bone. The Achelousaurus skull was different from that of the Pachyrhinosaurus and other Ceratopsids in that it had raised ridges and large bosses around the eyes.

Their noses were very big, and their upper beaks were hooked like those of parrots. Their short, stumpy tails rested with the bottom facing up. Their jaws had dental batteries that were made of long rows of teeth and had hundreds of teeth stacked on top of each other. One thing that has been noticed about these Ceratopsid dinosaurs’ teeth is that new teeth grew under old ones inside the tooth sockets. Also, these teeth were stacked on top of each other, which is known.

3: What does the name Achelousaurus mean?

The name Achelousaurus means ” Achelous’ lizard,” which is a reference to an ancient Greek river god named Achelous.  Achelous was a Greek river god. During a mythological battle, Hercules is said to have ripped one of Achelous’ horns off.

4: How do you pronounce ‘Achelousaurus’?

Achelousaurus was likely a herbivore, consuming a variety of leaves, twigs, and seeds. They typically inhabit a more greener habitat, with low-lying grass fields and meadows, as well as a river and lakes flowing along the edges. This provides them with the ease and access to food and water necessary for survival.

A team led by Jack Horner discovered the first Achelousaurus fossils in Montana in 1987, and additional were discovered in 1989. Scott D. Sampson proposed the name Achelousaurus horneri in 1994.

North America is where these Achelousaurus dinosaurs were discovered. The holotype was discovered in the Two Medicine formation in Glacier County, Montana, during excavations led by the Museum of the Rockies. The Achelousaurus is thought to have inhabited on the east coast of Laramidia, the prehistoric continent island that is now western America.

8: When was the Achelousaurus alive?

Achelousaurus was a centrosaurine ceratopsian dinosaur that existed in North America between 83 and 70 million years ago during the Late Cretaceous period.

9: What kind of climate did Achelousaurus inhabit?

This dinosaur lived in a region that had brief summer rainy seasons and prolonged dry times. It’s thought that because main rivers dried up faster, this Ceratopsian genus relied on oxbow lakes for a steady source of water and food.

A few dinosaur fossils were discovered in a clay-coalified wood mix, indicating the occurrence of seasonal dry swamps similar to those that exist today. Furthermore, vegetation was scarce, and some of these dinosaurs died of malnutrition and thirst in a drought-like environment, according to Horner’s observations.

10: What was Achelousaurus’s height and weight?

The Late Cretaceous dinosaur Achelousaurus was a medium-sized dinosaur with a length of up to 20 feet (6 metres). The Achelousaurus stood roughly 6.5 feet (2 metres) tall, almost as tall as a full-grown moose.

Based on the size and remnants of the Achelousaurus, it weighed around 6,393 lb (2,900 kg), roughly half the weight of a male African bush elephant.

11: How did the Achelousaurus protect itself?

The ‘Achelous lizard’ was claimed to have been protected by its neck frill, as well as bosses all over its skull. The concept that an achelosaurus used its horn for defence is also debatable, because an achelousarus would have to bend so low to attack that it might not even be able to see its predator. However, this should not be overlooked because the possibilities of this occurring are slim but not impossible.

Achelousaurus was a quadrupedal herbivore, a herbivorous species with four legs that traversed the ground. It moved on all fours, had a short tail, and a huge head with a hooked beak as a ceratopsian. It featured a bony neck-frill near the back of the head, which had a pair of long spikes that curved outward.