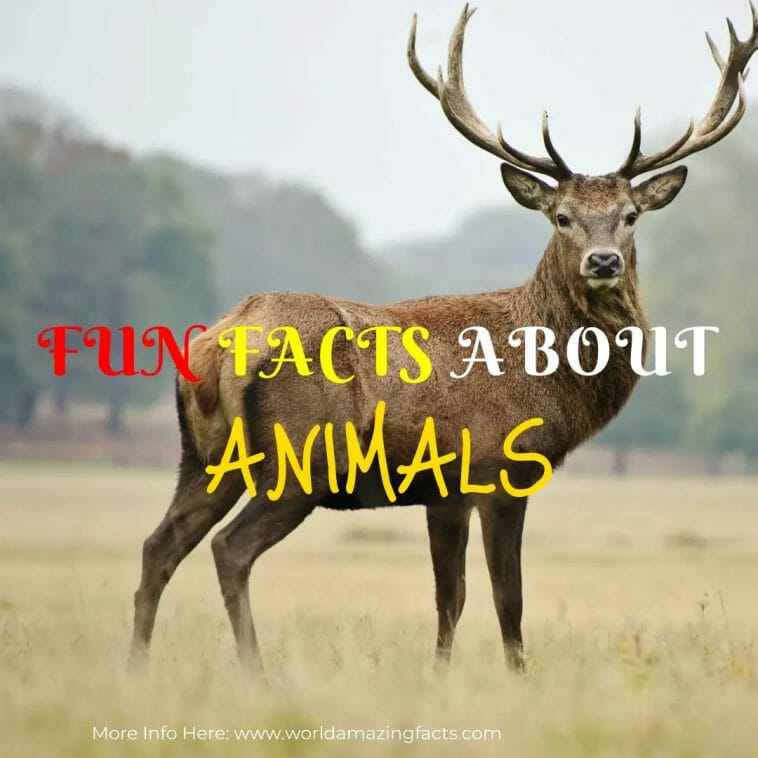 Animals are the most fascinating creatures on Earth, and yet there is so much to learn about them! We’re going to show you some cool facts about some of the most awesome animals out there. From the elephant to the platypus, and from the liger to the dingo, we’ll explore all of the animal kingdom’s coolest critters. We’ll be looking at animals both big and small, both domestic and wild.

Contents for Fun Facts about Animals

Jonathan, a 190-year-old tortoise, is the oldest-known living land animal. He was born in 1832 and has lived on the Atlantic Ocean island of St. Helena since 1882.

2: The Heart Of A Blue Whale

3: Elephants Are Not Capable of Jumping

Elephants are not capable of jumping. Elephants stand on their toes, with all of their bones pointing straight down to support their weight. However, this does not allow for an upwards spring from the feet, which is required for jumping, which is why they cannot jump.

4: Platypus Does Not Have A Stomach

The platypus does not have a stomach; instead, its gullet connects directly to the intestines of the animal. The middle sac does not secrete any substantial acids or digestive enzymes, which is unusual.

Wombats are the only animals that produce faeces that are cube-shaped at 2cm (0.8in). The faeces of wombats transitioned from a liquid-like condition to a solid state in the last 25% of the intestines, but in the final 8%, the poop adopted the shape of isolated cubes due to a variance in the elasticity of the walls. The animals can leave up to 100 faeces deposits per night in order to mark their territory.

Octopuses have three hearts, nine brains, and blue blood, which makes them unique. Two hearts pump blood to the gills in octopuses and one circulates blood around the body. The octopus has nine brains, because each of its 8 arms includes a mini-brain that enables them to work independently of their own in addition to the central brain. The blood of the octopus contains a copper rich protein known as hemocyanin that supports the transfer of oxygen in the cold water environment.

7: The Bat Is The Only Mammal That Can Fly

The bat is the only mammal that has the ability to fly. Bats are able to fly because of their flexible skin membrane, which stretches between each long finger bone and many moveable joints.

8: Kangaroo Is The Only Animal With Five Legs

The kangaroo is the only animal on the planet that has five legs. The kangaroo’s tail, in contrast to the tails of other animals, serves as a leg, propelling the animal forward as it walks.

9: Female Lionesses Hunt 90% Of The Time

The female lionesses hunt approximately 90 percent of the time, while the male lions defend their territory and pride.

10: A Snail Can Sleep for Up to Three Years

A snail has the ability to sleep for periods of up to three years at a time. Snails can dwell in their shell for lengthy durations under extreme heat or cold. Snails can sleep for 3 years in harsh weather conditions, but this is rare. A snail might sleep for one-third of its life. A snail not only hibernates, but also aestivates (hibernation during hot and dry conditions).

11: The Antarctic Wingless Midge Is Antarctica’s Only Insect and Largest Land Animal

An Antarctic wingless midge (Belgica antarctica), which reaches 2–6 mm in length and is the sole insect found on the continent, is the largest land animal on the continent. All of the other larger species in Antarctica are classified as marine animals, which means that they feed and spend the majority of their time in the ocean. Seals and penguins, two of Antarctica’s most well-known residents, are included in this category.

12: The World’s Most Lethal Creature Is A Mosquito

The world’s deadliest animal is a mosquito, not a shark, snake, or tiger. Around 725,000 people die each year from mosquito-borne diseases like malaria, dengue fever, and yellow fever, according to the World Health Organization. With the exception of ants and termites, they are the most numerous species on the planet. This increases the danger they pose to people because they can be found virtually everywhere.

13: There Are 1.4 Billion Insects For Every Human

According to current estimates, there are more than 1.4 billion insects for every human on the Earth. Ants have taken over nearly all of the planet’s landmasses. They are predicted to have a population of 107–108 billion people, whereas the global human population is approximately 7 billion.

14: Lesula Is A Rare Monkey Found In Africa

Lesula, a monkey found in a remote area of Africa, is the continent’s second zoological discovery in the last 28 years. It’s a new species of monkey discovered in the Congo. Their eyes, as well as their vibrant blue bottoms, stick out due to their human-like appearance.

15: Honey Ants Are The Only Ants That Store Food Internally

Honey ants are the only ants that store food in their own bodies to be used by their fellow ants in times of scarcity. For use when the honeypot ant’s crop has run dry of stored liquid, workers stroke its antennae and cause it to regurgitate its crop’s liquid supply. By way of trophallaxis, they are then used as a food source by other ants. As a result, they serve as a sort of walking, breathing pantry.

Flamingos aren’t born with pink feathers. A baby flamingo’s fur is born grey or white, then it turns pink as it gets older. They get their pink colour from eating brine shrimp and blue-green algae, which contain a natural pink dye called canthaxanthin.

17: Sea Otter Moms And Pups Hold Hands While Floating On Their Backs

While floating on their backs, sea otters, especially moms and pups, sometimes grasp hands. The otters’ hand-holding prevents them from straying away from each other and their food supply while sleeping. They also sleep with long strands of kelp wrapped around them like a blanket. The kelp functions as an anchor, keeping them from floating away into open water.

18: The Mayfly Is The World’s Shortest Living Creature

The Mayfly is the shortest living animal on the face of the planet. Its total life span is only 24 hours long. During its short 24-hour lifespan, the mayfly reproduces and then dies, a cycle that repeats several times. Some species of Mayfly only live for 8-10 hours, depending on the species.

Koalas sleep between 18 and 22 hours every day. They require more sleep than most animals, as their diet of eucalyptus leaves contains toxins, is low in nutrients, and contains a lot of fibrous material, which requires a lot of energy to digest. Sleeping for extended periods of time is a method of conserving energy.

20: The Peregrine Falcon Is The World’s Fastest Animal.

21: Hummingbirds Are The Only Birds That Can Fly Backwards

Hummingbirds are amazing and interesting birds. They are not only the tiniest migrating birds, reaching between 7.5 and 13 cm in length, but also the only birds that can fly backwards and upside down. Hummingbirds’ shoulders have a unique ball and socket joint that allows them to rotate their wings 180 degrees in all directions. The hummingbird’s wings move in a figure-eight pattern, allowing the bird to glide backward in the air with ease.

22: Pistol Shrimp Catches Its Victim By Shocking It With A Loud Claw Bang

The pistol shrimp catches its prey by surprising it with a loud banging noise made with its claws. The sound is so powerful that it causes their prey to be stunned or possibly killed. In some cases, the sound produced by pistol shrimp claws can reach 230 dB, which is comparable to the volume of a gunshot.