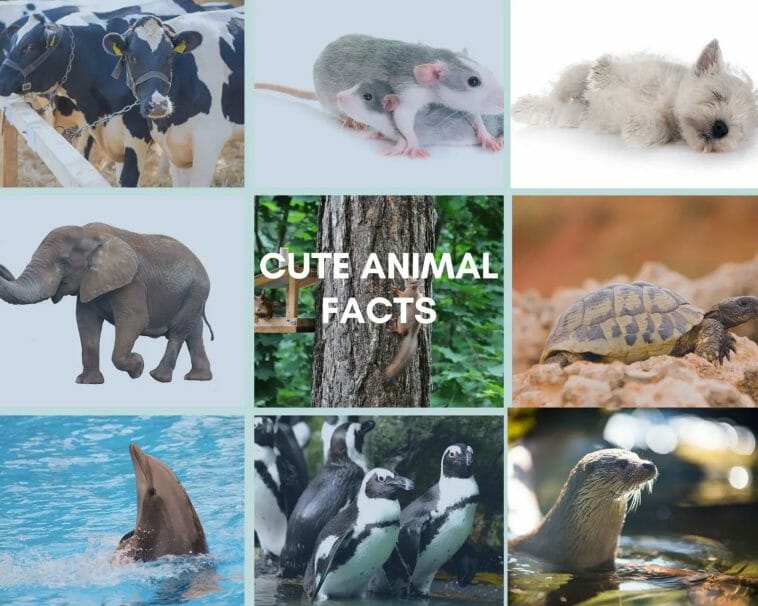 Animals come in all shapes and sizes, therefore it’s not unexpected that there are a lot of fun facts about animals. Like human beings, animals also have some traits that can be surprising. They’re adorable, cuddly, and simply amazing. You may not realise it, but the planet is home to an incredible variety of animals! There is something for everyone here, from sea animals to mammals, reptiles, and insects. Here are some cute animal facts that might surprise you.

Contents for Cute Animal Facts That Can Surprise You

It is common nature of humans that they feel better in the company of their friends. One of the cute animal facts is that some animals like the cows also feel more comfortable with friends. To find out their responses to the companions the scientists placed some cows with their best friends for around 30 minutes. They also put them with strangers for an equal period. It was found that the cows placed with friends had lower levels of stress and pounding of hearts.

2: Bees can recognize your face.

You can recognize the face of any person with whom you are familiar. But do you know that like you, a bee can also recognize human faces? When you learn such cute animal facts, it could be an astonishing experience. Scientists found this amazing fact when they trained the bees with associating tasty sugar snacks with human faces. Bees were able to recognize those faces easily.

3: When you tickle rats, they laugh.

Rats and human beings are different from each other in many ways. But there is one common feature in them. Just like you will laugh when someone tickles you; rats also laugh when they are tickled. It is one of the cute animal facts that surprised even the scientists. They did not expect such reactions from the rats. Moreover, the rats can also identify the tickler as a playmate.

4: Like the rats, the penguins also laugh when tickled.

This one is another of the cute animal facts. Scientists have discovered that it is not only the rats but also other animals that respond similarly when tickled. This means they also laugh like the rats when they are subjected to tickling. One such ticklish animal is the Penguin that responds to tickling by laughing.

5: Dogs dream about their owners most of the time.

Scientists researching dog behavior have concluded that a dog will have a vision of its owner while dreaming most of the time. This trend is common in human beings also in another form. People dream about the things they are interested in. On the other hand, a dog has no one more important in its life than its owner. Its loyalty towards the owner reflects in the dreams. It is also one of the cute animal facts to learn.

Like men and women; elephants also celebrate new birth in their groups. Female elephants are very social. When a new calf is born; trumpet by all the females in the group announced its birth.

7: Some turtles have the ability to breathe through their buttocks.

Turtles obtain oxygen from the water through cloacal respiration, which is the movement of water over their bodies covered in blood vessels. In turtles, the cloaca is their butt, which has a lot of blood arteries, making cloacal respiration the most efficient method of getting oxygen to the rest of their body. According to McGill University, turtles aren’t the only reptiles and amphibians that can breathe via their butts. Frogs and salamanders are also known as butt breathers.

8: Otters have a pouch in their skin where they can keep their favourite rock.

In order to bring back as much food as possible to the surface, sea otters develop flaps of loose skin beneath each forearm. In order to consume clams, crabs, and other shellfish, sea otters use rocks as a tool. If the abalone aren’t loosening their grasp on the seafloor rapidly enough, they can pound their shells 45 times in 15 seconds with rocks. Several otters carry around a favourite rock in one of their underarm pockets, which they keep close at hand.

9: Dolphins have been known to attempt to save the lives of humans in danger of drowning.

A number of incidents have been documented in which dolphins have assisted humans in getting to the surface or alerting other swimmers to their situation. In certain cases, dolphins have even been reported to save the lives of people in the water from shark attacks. This behaviour may be linked to the fact that dolphins are considered one of the most intelligent creatures on the planet.

Squirrels are willing to adopt orphaned pups provided they are near relatives of the adoptive mother. Adoptions are widespread among species that live in large groups, but it’s rare for asocial creatures like squirrels, which are territorial, live alone, and rarely interact with one another. Squirrels can also determine whose puppies they are related to before deciding if they want to adopt them, according to a study.

11: Dolphins become high on purpose as a result of puffer fish nerve toxins.

Tetrodotoxin, found in puffer fish, may kill a human in minutes. Experts say that in modest doses, this toxin has a narcotic effect on dolphins. Puffer fish nerve poisons are purposely chewed and passed around by dolphins to get high. The toxin has a narcotic effect in small doses, and the dolphins seemed to have figured out how to get the fish to release exactly the correct amount. The behaviour was documented on camera by the award-winning wildlife documentary producer John Downer for BBC One’s Dolphins: Spy in the Pod.