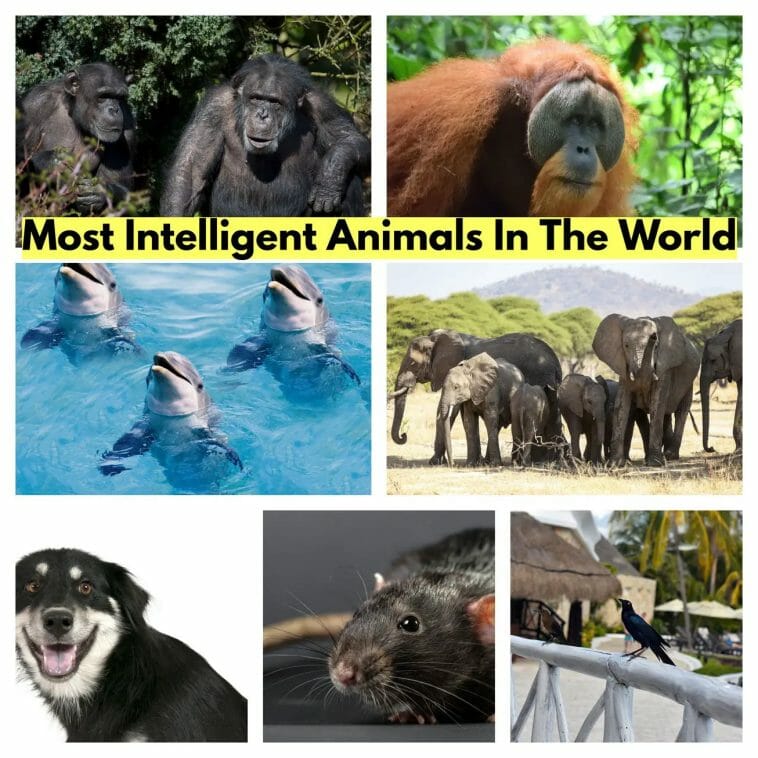 We humans proudly assert our intelligence superiority on all the creatures and hence ignore the fact that animals are smart too. Now, how can we categorize or measure the level of intelligence of any animal? Well, that’s the tricky part because there are no specific criteria of intelligence. Over the period, all the animals and humans have evolved to survive in their natural habitat. So, we use different pointers to recognize the intelligence level of an animal. These pointers can be creativity, problem-solving, social learning, abstract thinking, and many more.

In today’s article, we will check out some of the most intelligent animals based on their cognitive reasoning skills. So, let’s get started!

Contents for Top 8 Most Intelligent Animals in the World

Well, let’s be honest, the list wouldn’t work if we didn’t include chimpanzees. They are the most intelligent animals on the planet and are considered our closest relatives, with a 99% gene overlap with humans. They display a lot of physical signs similar to humans, such as using tools in the wild, displaying various emotions, hunting as a group, recognizing themselves in the mirror, and using sign language.

Chimpanzees are also known for developing their own cultures in a group, which are different in behavior to the other groups. They are also known to be sophisticated communicators and can use 60 different gestures to communicate with each other. Chimpanzees can also learn human sign language.

Orangutans share a lot of common characteristics with chimpanzees. Just like chimpanzees, they can also use tools, display various emotions, hunt as a group, recognise themselves in the mirror, and use sign language. But what sets them apart from chimpanzees? Well, to be precise, they can understand why an action is performed. Orangutans are gifted in terms of their intellect and cognitive understanding.

Dolphins are quite famous for their intelligence and for being friendly towards human beings. Dolphins have a large brain relative to their bodies, and their brain has more folds than us humans, pointing towards their higher intelligence. They are able to be trained easily due to their intelligence, recognise themselves in mirrors, see images on TV, and have amazing memory capabilities.

Dolphins are extremely sociable animals, and it is believed that the clicks and sounds of dolphins might be another sophisticated language with some words referring to each other’s names. Similarly, many young dolphins stay close to their mothers for the first few years to learn life essentials.

Brain size is not all that sets elephants apart. They have the largest brains of all the terrestrial mammals in the world, and their neuron count is the same as a human brain’s. Elephants are famous for having lengthy memories, great empathy, a sense of self-awareness, and the ability to recognise themselves in the mirror. Elephants have a complicated social nature, and some elephants have been witnessed holding funeral-like rituals and mourning their loss.

Elephants can also work together to solve complex problems and puzzles. Elephants can also make abstract decisions on the spot. For example, if they believe that their death would help their children or herd escape to safety, then they will sacrifice themselves.

Well, they don’t call him “the man’s best friend” for no reason. Dogs use their intelligence to understand your behavior. They are capable of understanding emotions, signs, behavioural patterns and show empathy. Dogs can follow and respond to every gesture you make, such as pointing towards an object.

Furthermore, an average dog can understand around 165 human words, but they can even learn more. For example, a border collie named Chaser was able to understand around 1022 words. You can also check out his complete vocabulary analysis, which was published by the Department of Psychology, Wofford College.

There’s a particular reason why rats are used as the test subject in the majority of laboratory experiments. Rats are highly intelligent rodents with a quick learning speed. In the physical aspect, they have an under-developed mind, but it functions like our brain. Even though rats are known for their weak eyesight, their intelligent minds allow them to solve difficult problems, memorise their routes and perform complex multi-step tasks.

Rats are also highly social and empathetic rodents. If a rat is left alone or trapped away from its home, it starts exhibiting signs of loneliness and depression. These unique psychological and social points make rats one of the most intelligent animals on our planet.

Crows belong to a highly intelligent bird species, Corvid, which also includes members like magpies and ravens. These intelligent birds were also used as messengers in the past and are the only birds known for creating tools. You might have seen them using sticks or stuff to poke into a tree hole or do some weird actions. Crows are also quick learners, especially the young ones, who learn and imitate their adults and adapt according to their teachings.

As far as we know, the octopus is the only intelligent invertebrate on this list. You might be wondering, given that an octopus is the only one of its kind featured here, just how intelligent it is. When escaping imprisonment, captive octopi have been reported to use high-order planning, including numerous steps, while others have been known to purposely harm objects outside of their tank by repeatedly sprinkling it with water.