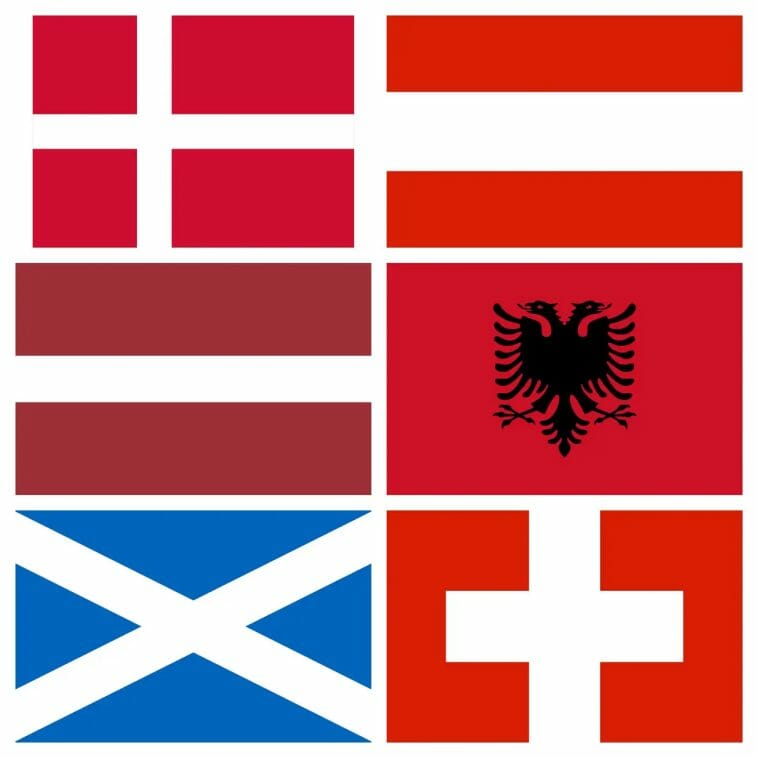 Flags are such a crucial component of a country’s identity, and they usually symbolize something essential about the country in question. The Star-Spangled Banner, for instance, has 13 stripes to symbolize the 13 British colonies that claimed freedom from Britain, as well as 50 stars to represent the 50 states that make up the United States of America. Some flags, on the other hand, are far simpler than this, with two solid colors. Nonetheless, some flags represent extremely significant events and play significant roles in the history of their respective countries. The flag is important for the status of the country.

Contents for Top 6 Oldest National Flags in the World

Denmark’s national flag is the oldest and most popularly used. By 1625, the current design of a white Scandinavian cross on a red background was approved, and in 1748, the square shape was authorized. It is regarded as the ‘Dannebrog’ or ‘Danish fabric’ in Denmark. Although Denmark was never a part of the Roman Empire, the Imperial power used similar features to represent provinces, since the white cross is a Christian symbol. As you confront the Scandinavian cross, the horizontal stripe is slightly to the left of the square.

Even though no standard definition of “continuous” use exists, the Danish flag was clearly being used in the 1370s, as evidenced by the Gelre Armorial by Claes Heinenzoon (or Heynen 1345-1414). As depicted in watercolor in Rudolf Dewenter’s Bericht von Pulver und Feuerwerken in 1585, it was undoubtedly used in naval battles during the conflict against Sweden in the 1560s. King Christian IV set the first documented laws for waving the flag and Colors of Leadership in the Danish Navy in his War Articles, which were promulgated on May 8, 1625.

Austria’s flag consists of three equal horizontal red, white, and red stripes. The flag’s concept is based on the Babenberg empire’s coat of arms, and it was originally orange-white-blue, but the orange and blue lines were eventually changed to red.

According to mythology, Duke Leopold V of Austria designed the flag as a result of his victories during the Siege of Acre (1189-1191). His white surcoat was entirely saturated in bloodshed after tough combat. When he took off his belt, the white material below revealed the color combination of red-white-red. He was so captivated with this one-of-a-kind sight that he adopted the colors and design as Austria’s flag.

The Flag of Latvia, one of the oldest known flags, was first referenced in 1280 in the Rhymed Chronicle of Livonia, a medieval history. Latvian clans used a red standard with a white stripe, according to the chronicle. “When the chief of the Medieval Latvian Semigallian clan led the assault against the Teutonic Crusader held Riga, Latgalian soldiers from Cēsis started to support the crusaders,” according to LatvianHistory.com. The Latgalians arrived carrying a red-white-red banner known as the ‘flag of the letts.”

According to mythology, a terminally wounded Latvian tribe leader was covered in a white sheet. The area of the cover on which he was resting kept white, but his blood covered the two edges. The bloodied sheet was used as a flag in the next battle. According to folklore, the Latvian soldiers were victorious this time and pushed the invaders away.

Albania’s flag is made up of a red backdrop with a black two-headed eagle in the centre. Albania’s flag was first seen on November 28, 1443, when Skanderbeg, Albania’s great patriot, flew his flag over the castle of Kruj in defiance of the Turks who dominated the land. The Byzantine Empire provided the inspiration for the double-headed eagle design.

Albanian nationalists resurrected the double-headed eagle as a sign of their fight for freedom from the Ottoman Rule in the late nineteenth and early twentieth century. The Albanian Proclamation was declared on November 28, 1912, and the flag was legally adopted.

Switzerland’s flag features a white cross in the middle of a square red field. The Swiss cross is a white cross with a cross in the middle. Its arms are equilateral, with a length-to-width ratio of 7:6. In 2017, the ratio of the cross to the field was fixed at 5:8. Since its beginnings in the late 13th or early 14th century, the Old Swiss Confederacy has employed the white cross as its military sign (connected to warriors’ apparel and cantonal warfare flags in the shape of strips of linen). The Swiss Federal Council characterized it as reflecting “at the same time the Christian cross symbol and the field symbol of the Old Confederacy” in 1889. It was being used as a state ensign by commander Niklaus Franz von Bachmann during the Napoleonic Wars, and then as the regimental sign of the cantonal forces starting in 1841. In 1815, the Restored Confederacy’s national coat of arms (eidgenössisches Wappen) was specified as a white-on-red Swiss cross in a royal shield. Until 1889, when its specifications were officially determined, the current layout was used in conjunction with a five-square cross.

Swiss ships, boats, and non-governmental organizations fly the civil and sovereign ensign of Switzerland, which is rectangular in shape and has the more usual proportions of 2:3. The Swiss flag is one of only two square supreme flags in the world, with the Vatican City flag being the other. The Swiss flag with reversed colors is the Red Cross’s insignia.

The Scottish flag, which dates back to 832 AD, is the earliest on our list. Although the Scottish flag is over 500 years old, its tale extends back centuries earlier, even to the time of the Bible. The flag is readily recognized, with a blue background and a white saltire across it. The flag is supposed to have been created during a fight between the Scots and Picts, as well as the Angles, thousands of years ago. If King Oengus succeeded, he promised to make Saint Andrew the patron saint of Scotland. According to history, Oengus and his warriors awakened to find the clouds had formed an X shape in the sky after receiving a sight from Saint Andrew guaranteeing them of victory. This is claimed to have spurred the Picts and Scots to a spectacular victory, and also served as the inspiration for the flag, which is a white X on a blue backdrop.