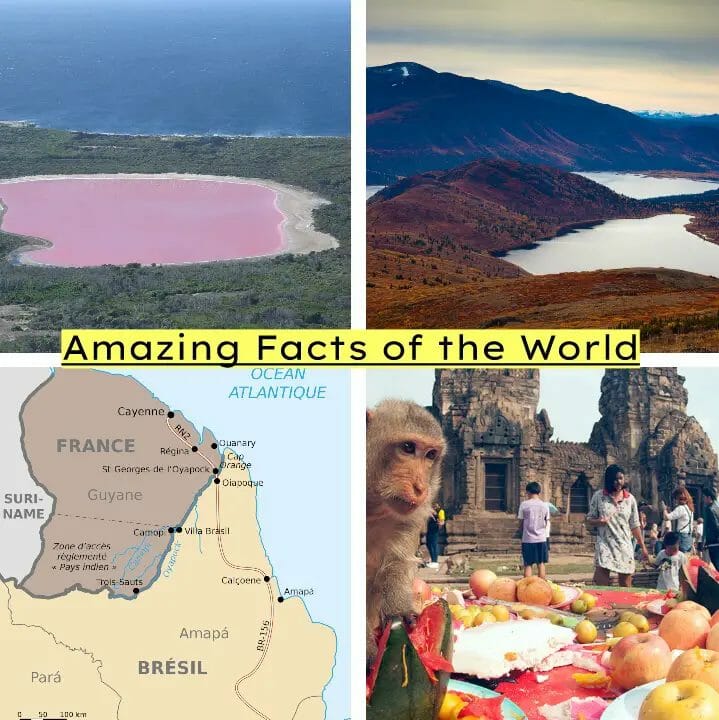 With 195 countries in the world, it is an incredible place with endless interesting and amazing facts. Here are some amazing facts about the world that are sure to surprise you.

Contents for Interesting and Amazing Facts of the World

1. There is a pink lake in Australia.

Have you ever seen a pink lake?  Lake Hillier in Australia is famous for its vibrant pink color which is one of the amazing facts of the world. It is a saline lake that sits on the edge of the Middle Islands and is located within the Recherché Archipelago Nature Reserve. Lake Hillier measures around 600 m (2,000 ft) long by 250 m (820 ft). The vibrant pink color is permanent, and it does not change if the water is poured into a container. The water of the lake contains the algae Dunaliella Salina which entails the red dye.

2. Canada has the most lakes in the world.

Lakes are vital for ecology and global climate. They are also beautiful to watch. Can you imagine Canada without lakes? It is one of the amazing facts of the world that Canada has the most lakes in the world.  The country has more lakes than all other countries of the world, combined. There are 1.42 million lakes in the world, and Canada holds a whopping 62% of lakes of them. These lakes are so large that they are considered enclosed seas.

3. France has its longest land border in Brazil.

No, we are not that bad in geography. Although seems absurd, it is one of the amazing facts of the world and you can check it yourself! Brazil and France share 730 kilometers (450 miles) of land border in the Amazon Rainforest. It separates the French region of French Guiana and the Brazilian state of Amapá. It is the longest land border of France with any other country. The next is with Belgium that is 657 kilometers (408 miles). The Oyapock River forms part of the border, and the Oyapock River Bridge connects Saint-Georges (French Guiana) and Oiapoque (Brazil).

A seven-year age difference might make all the difference in the world. When you’re done, go to Ethiopia! Ethiopia is in the year 2014, while we are in the year 2021. That’s why it’s such a fascinating fact. Ethiopia, unlike the majority of countries, employs a distinct calendar. When it comes to holiday dates, Ethiopia uses the Gregorian calendar and celebrates the New Year on September 11th and Christmas on January 7th. Ethiopia is a one-of-a-kind tourist destination, especially for people who want to enjoy Christmas and New Year’s in Ethiopia. Visitors, on the other hand, are unaffected. Using both the Ethiopian and Gregorian calendars is standard practise in modern Ethiopia.

The monkey buffet festival of Thailand is one of the amazing facts of the world. Every year, the people of Lopburi, in central Thailand, feed monkeys on the last Sunday of November. The monkeys of the Phra Prang Sam Yot temple are offered fruits and vegetables. Locals also dress up as monkeys like monkeys and join the feast.

6. Sweden has the most islands of any country in the world.

7. Egypt is the world’s oldest country.

With a history dating back to roughly 6000 B.C., Egypt is the world’s oldest country. Around 3100 BC, the first Egyptian dynasty arose in Egypt. King Menes united Upper and Lower Egypt at this time into a single kingdom. The Egyptian word for founder, Menes, refers to a ruler named Narmer, who many historians think was Egypt’s original founder.

8. The Sahara Desert is covered in ice.

Precipitation rarely occurs in desert areas. If rainfall is so rare, wouldn’t snowfall be considerably less common? In 2022, the Sahara Desert was blanketed in white snow, making the unimaginable possible. The Sahara Desert covers an area of more than 3.3 million square miles (8.5 million square kilometres). The Sahara Desert dunes outside the town of Ain Sefra in northwestern Algeria were blanketed in ice crystals on Tuesday, January 18, 2022. It is unusual but not unique to see the accumulation of snow and ice in the northern Sahara. This is the fifth occasion in 42 years that Ain Sefra has seen snowfall, following 1979, 2016, 2018 and 2021.

9. About 69% of the world’s fresh water is in glaciers and ice sheets.

Water in Crisis: A Guide to the World’s Fresh Water Resources, published by the US Geological Survey, estimates that the oceans hold 96% of the planet’s total water supply. That, though, is primarily seawater. Most freshwater on Earth is found in ice caps and glaciers that are permanently snowed over, with 68.7 percent of the world’s freshwater buried beneath these layers of snow and ice.

10. Hawaii is the best location on the planet to witness rainbows.

If you’re a frequent observer of rainbows and want to see more of the wondrous occurrence, go no further than the state of Hawaii. According to a report released in 2021 by the American Meteorological Society, the area’s “mountains create strong gradients in clouds and rainfall, which are critical for the region’s prolific rainbow sightings.” Air pollution, pollen, and a huge number of cresting waves all contribute to Hawaii’s prominence in terms of rainbow quantity and beauty.