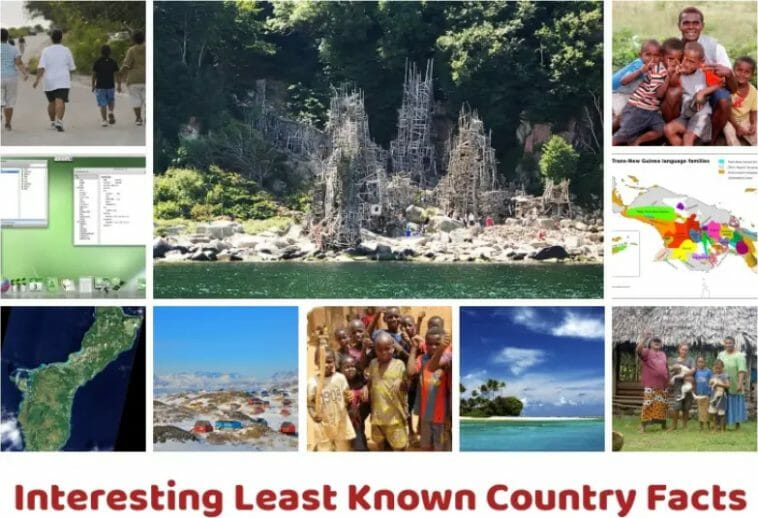 The world is a weird place full of new discoveries and countries that don’t fail to surprise. Apart from Europe or America, Earth is full of beautiful, mysterious, and ancient countries and places that need to be visited and yet remain in their natural state due to very few visitors. Some of these countries have such incredible and shocking facts that it gets hard to believe but that’s the main reason why we need to talk about the least visited countries of the world.

Nearly halfway between Hawaii and the Philippines, a series of volcanic islands make up The Marshall Islands group. For this reason, they’re a popular tourist attraction in the midst of the Pacific. These islands have been labelled as some of the most vulnerable in the world because of the increased risk of floods brought on by climate change.

There’s little doubt that Greenland is the world’s largest island. With its location sandwiched between two oceans, it has a lot to offer visitors. Because of the climate of Greenland, the country has been unable to participate in FIFA competitions. Aside from geographical and infrastructure issues, it’s difficult on Greenland because they can’t grow grass that’s the right length.

Ladonia is a creation of an artist named Lars Vilks, who made an art installation made of driftwoods in 1980. Ladonia is known as a micronation situated in the South-West of Sweden. Ladonia became a free country after numerous disputes between Vilks and the authorities, who wanted to destroy these sticks. The country became independent in 1996 and, most of its residents are nomads, so basically, no one lives near the pile of sticks.

South-west of the Pacific Ocean lies Papua New Guinea. Papua New Guinea is the world’s most linguistically diverse country. There are 851 distinct languages recorded in all, with 11 of those being extinct. Only 1-2 percent of the population speaks English, despite the fact that it is the official language of the country. They have a distinct culture and way of life that set them apart from other people.

In the United States, Guam is a federally recognised island territory. Even though it’s not a state, it’s been a part of the United States of America as an unorganised territory since 1898. Due to a lack of natural sand, the roads in this area are constructed of an oil and coral mixture. This is an intriguing fact about this territory: Consequently, when it rains, a lot of oil gets washed up on the roads, making them even more hazardous to drive on. As a result, the island’s posted speed limit is 35 mph.

Niger is a West African country located on the Niger River. This country is bordered to the north and east by Libya and the east by Chad. Niger’s most intriguing feature is that it has the world’s youngest population. Niger is home to the world’s youngest people, with a median age of 15 and a population that is half or younger.

Fiji is a country in the Oceania region, in the southern Pacific Ocean. There are around 300 islands in this country. It’s interesting to note that this is the only other country, after India, where Hindi is spoken and recognised as an official language. There are native Fijians who make up 54% of the population, and Indo-Fijians who were transported here from India to work on sugarcane farms.

A Polynesian country located between Hawaii and New Zealand, Samoa is a popular tourist destination for both locals and tourists alike. Since the early 20th century, the Samoan government has welcomed and officially recognised transsexuals, known as Fa’afafine, as members of the third gender in the society.

After all the time it’s spent in the headlines, North Korea doesn’t require an introduction. North Korea’s official operating system, on the other hand, is a fascinating fact. There is just one operating system in North Korea, and that is Red Star OS. A Linux distribution was used in its development by the Korean Computer Center.

There’s a tiny island in the South Pacific called Niue. It’s an independent country that’s free to join forces with New Zealand. There are just 1,620 people living on this tiny island, but interestingly, it is the world’s first and only Wifi-nation, which means that everyone on the island has free wifi.