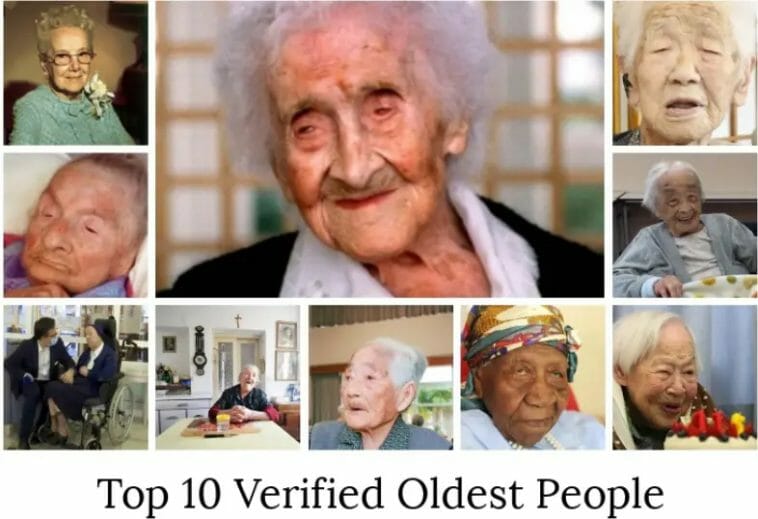 The average life expectancy was roughly 40 years old 100 years ago. It has already more than doubled. We’re breaking records for lifespan as we live longer and healthier lives. New questions arise as more people live to be 100 years old or beyond: how do they keep healthy? What secrets do they have? The following is a list of the world’s oldest people.

Contents for Top 10 Oldest People in the World

Jeanne Louise Calment is the world’s oldest individual, according to the Guinness World Records. When she passed away in 1997 at the age of 122-years-164-days, she was a French supercentenarian and the world’s oldest documented human. As she celebrated her 120th birthday, Jeanne told the media that she anticipated a limited life expectancy. In 1986, she became France’s oldest person at the age of 111. Even the Spanish flu didn’t stop her from surviving the two world wars.

Jeanne is also the oldest actress ever. She featured in a film about herself called ‘Vincent and me’ at the age of 111. Jeanne revealed that her secret to long life was olive oil, port wine, and chocolate. She stopped smoking at the age of 120. She claimed to have never been seriously ill throughout her life, and the only major injury was breaking her ankle while cycling in her retirement age. Jeanne cycled until her 100th birthday. She lived alone from when she was 88 years to 110 years and later on moved to Maison du Lac nursing home. Jeanne died on August 4, 1997, from unspecified causes.

Her health journey has not been so smooth. At the age of 35, she was infected with paratyphoid fever, underwent pancreatic cancer surgery at the age of 45, and colorectal cancer surgery at 103 years old. She attributes her long life to having faith in God, her family, having enough sleep, hope, eating good food, and practising mathematics to keep her mind awake. In an interview on her 114th birthday, Kane said that she wished to live for 120 years.

Sarah was born on September 24, 1880, in Hollywood, Luzerne County, Pennsylvania, in the United States of America. She died in December 1999 in Allentown, Pennsylvania. Sarah is the oldest person ever in the United States and the second oldest verified person ever in the world, having lived 119 years and 97 days. Sarah was recognized by the Guinness World Records as the world’s oldest living person on April 16, 1998, until her demise in 1999 at the age of 119 years and 97 days.

Sarah joined the phoebe nursing home, an affiliation of Harvard in Allentown, Pennsylvania, in 1990. Sarah lived a healthy life with no major disease affecting her. She said that her secret for long life was not letting things upset her. She died a natural death on December 30, 1999. Sarah was described as a friendly person, calm in nature, and with a gentle demeanor. She donated her major organs to the Harvard medical school after her death. Her DNA was used to study the link between genetics and longevity and also the prevention of debilitating diseases like Alzheimer’s.

Following the death of Japan’s Kane Tanaka on April 19, 2022, Lucile Randon became the world’s oldest verified person. On February 11, 1904, Lucile Randon was born in Ales, France. She is better known as Andre’s sister. She was born into a non-religious protestant household, but later joined the Catholic Church and became a nun. With her current age of 117 years and 270 days, Lucille is the world’s second-oldest known human. According to official records, Lucille is the world’s fourth-oldest living person and the second-oldest French citizen ever identified.

Recently she has gained the title of the oldest person to have been infected and recovered from covid-19 infection. She was asymptomatic and tested positive for the virus on January 16, 2021, shortly before her 117th birthday.  When asked about it, she said she was not scared of the disease because she was not scared of death. She was fully recovered by February 8, when she was tested again. Lucile resides in a nursing home Toulon in southern France. She is currently blind and uses a wheelchair to move around.

Nabi was the mother of nine children, seven sons and two daughters, and was estimated to have had over 160 descendants at the time of her death in 2018. She attributed her longevity to eating tasty food and getting adequate sleep. Nabi died in her sleep at the age of 117 years and 260 days in a nursing facility in Kikai, southwestern Japan, where she had been hospitalised for a month..

Marie-Louise was born on August 29th, 1880, in Kamouraska, Quebec, Canada. After her death on April 16, 1998, she was officially the oldest Canadian. When she passed away, Marie-Louise had lived for 117 years and 230 days.

In 1982, at the age of 102, after contracting a cold, Marie-Louise gave up smoking and declared that the key to a long life is hard labour. By the time she turned 117, she was barely able to walk or speak. Sadly, Marie passed away at a Corbeil nursing home in April 1998 from a blood clot.

Violet Brown was born at Duanvale, Trelawny, British Jamaica, on March 10th, 1900. She was the world’s oldest person for a period before passing away on September 15, 2017. Violet Mosse Brown was the oldest known Jamaican and Queen Victoria’s last known subject.

Brown lived a long and healthy life and never got sick. When asked about it, she stated that hard work is the most significant factor in living a long life. Violet Brown died at Montego Bay, Saint James Parish, a week after being diagnosed with dehydration and an irregular heartbeat. She died at the age of 117 years and 189 days.

Emma Martina Luigia Morano, an Italian supercentenarian born on November 29, 1899, was the world’s oldest surviving person whose age has been validated, and the last living person to have been verified as having been born in the 1800s.

After being questioned what she did to maintain her long-term health, she revealed that she had three eggs for breakfast every day and occasionally drank homemade grappa; she also indulged in occasional chocolate treats.

Currently, she is the oldest Italian person in the world, and the third-oldest person in Europe, after Jeanne Calment and Lucile Randon.

Chiyo Miyako, who was born on May 2, 1901, became the world’s oldest person when 117-year-old Nabi Tajima of Kikai Island in southern Japan died. She was the oldest verified living person from April 21, 2018, to the time of her death on July 22, 2018. According to Guinness World Records, Miyako’s relatives described her as a sociable girl who was patient and nice to others and enjoyed great food, particularly sushi and eels.

Okawa died of heart failure in the presence of her loved ones and the nursing home employees, who all offered their condolences for her long and good life. Okawa had been savouring her morning cup of coffee and her favourite meals, such as ramen. Sushi, her favourite meal, and getting at least eight hours of sleep a night are also crucial to long life, she claimed. Over the span of three centuries, she witnessed four Japanese emperors, six British monarchs, and 20 US presidents.

Before concluding, it is very notable that the top oldest people are all female, well, its believed that females have a longer life span than the male. Either way, it would be very unfair if we did not highlight the oldest men on our list. Two iconic men are Jiroemon Kimura, who is the oldest man ever, and Saturnino de la Fuente Garcia, who is the oldest living man.

Saturnino was born in Leon, Spain, on February 11, 1909. He is the world’s oldest living male, according to Guinness World Records. This was declared effective on August 12, 2021. He is 112 years and 238 days old. Saturnino is also the second oldest person alive in Spain.