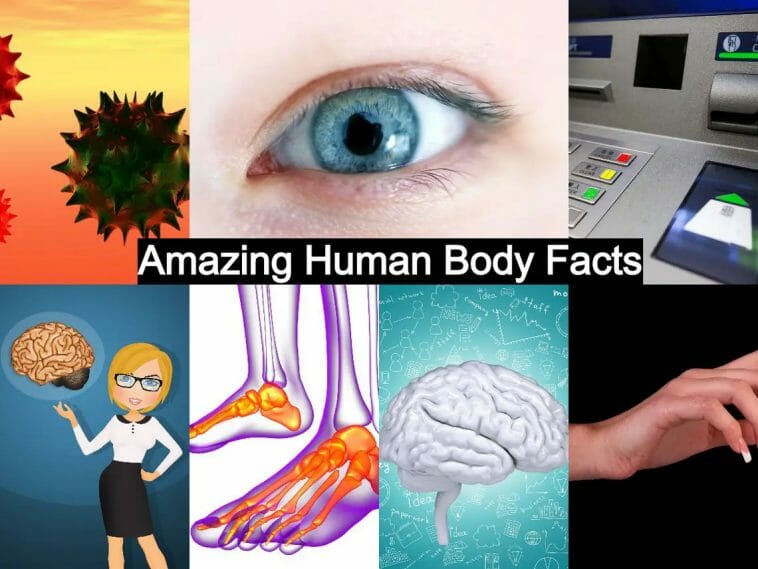 Human anatomy is a virtual wonderland. There are hundreds of facts about it discovered by scientists. Many more are also coming up. Here are some interesting facts about humans that can impress the readers. They will shed lights on things you want to know about the body.

1.   Cornea – The no blood supply organ in the human anatomy.

Organs in human anatomy depend on the supply of blood. The blood flow ensures the required amount of oxygen is available for them to function properly. An interesting fact about humans is that there is one organ to which no blood supply is made. It is the cornea that gets oxygen required from the air only. This is also the only organ in the body that does not need a blood supply to operate.

It is common knowledge that a grown-up man or woman has 206 bones in the body. They are placed in different limbs in the anatomy.  But a very interesting fact about the human body is that about 25% of these bones are stationed in the feet of a person. A surprising fact is also that the babies have 94 more bones than the adults. This means that people are born with 300 bones. The bones get reduced o 206 as they grow up.

The brain is the super organ in the body of a person. Some very interesting facts about the human brain are that it can survive only 5-10 minutes without oxygen. It will also start eating itself if one suffers from extreme starvation. Thus; the brain can reduce in size when a person is highly starved.

All the physical responses of a man or woman are triggered by the brain and its proper function is essential for keeping one active.

4.   There are many similarities between humans and the slugs.

One of the very interesting facts about humans is their similarity with slugs. Human DNA is almost 70% similar to slug DNA. Also; the human DNA is 50% similar to the banana DNA and 40% identical to a cucumber. This is because all living beings were connected when they arrived on the earth. The difference that now exists between humans and slugs is the outcome of changes that took place with time.

There are numerous ways for the human body to become infected. The public toilet is a popular site to become infected. Using the ATM can have a comparable effect on the human body, which is interesting. The bank that owns the ATM is responsible for sanitising it; however, customers who use the ATM should use caution. This is important as the dreaded coronavirus has a potential super spreader in form of the ATM.

6.   Fingernails are growing faster than toes.

Your fingernails develop at a monthly rate of 3.47 millimetres (mm), or roughly a tenth of a millimetre every day. If you lose a fingernail, it may take up to six months for the nail to grow back completely. The nails on your dominant hand, as well as the nails on your longer fingers, develop faster than the others. During the day and in the summer, your fingernails grow at a higher rate.

Toe nails develop more slower than fingernails. They grow at a pace of 1.62 mm each month on average. And if you lose a toenail, it might take up to a year and a half for it to grow back completely. That’s three times the length of time it would take for your fingernail to regrow. This is due to the fact that your toes are often subjected to less damage than your fingernails.

7.   During pregnancy, a woman’s brain shrinks.

According to a study published in the journal Nature Neuroscience in 2017, pregnant women had thinner cortical walls and less grey matter in their brains. In the cerebral cortex, particularly in areas that influence social cognition, where we process other people’s feelings and nonverbal messages, we lose grey matter. In fact, this shrinkage increases the brain’s ability to deal with social circumstances more quickly, notably when deciphering newborns’ wants and emotions.

According to the findings, the brain undergoes evolutionary changes during pregnancy that improve emotional and facial recognition, foster mother-infant bonding, and make it easier for a mother to understand her child’s needs while also processing social stimuli more quickly.

8.   There are more than a thousand different types of germs on your skin.

It is estimated that the human epidermis is home to about 1,000 different types of bacteria. Furthermore, microbes have developed to take advantage of the specific characteristics of the human parts they inhabit.

There is growing recognition that bacteria have colonised us both inside and outside our bodies, and their presence is not only innocuous but possibly vital to the body’s normal operation as well. There are 10 times more bacteria per square inch in moist places like your belly button and elbow inner bend than in dry places like your mid-forearm interior, according to research. It was discovered, however, that the bacterial species found on the forearm were the most diverse. Back of ear greasy area had the least variety of organisms tested.

10. For filtration, the kidneys receive the most blood flow, roughly 20% of the heart’s output.

You might think that your heart, liver, or brain utilized more blood or had greater blood flow due to their functionality. But that’s wrong as our kidneys have the greatest blood flow. Mainly because kidneys act as the natural filtration plant of our body.

One of the most important jobs of the circulatory system is to provide a continual supply of oxygenated blood to the kidneys. Despite their tiny size, the kidneys filter around 20% of the blood output of the heart. Because the kidneys rely on a regular blood supply to function, disruptions in blood flow to the kidneys can result in tissue death and kidney function loss.