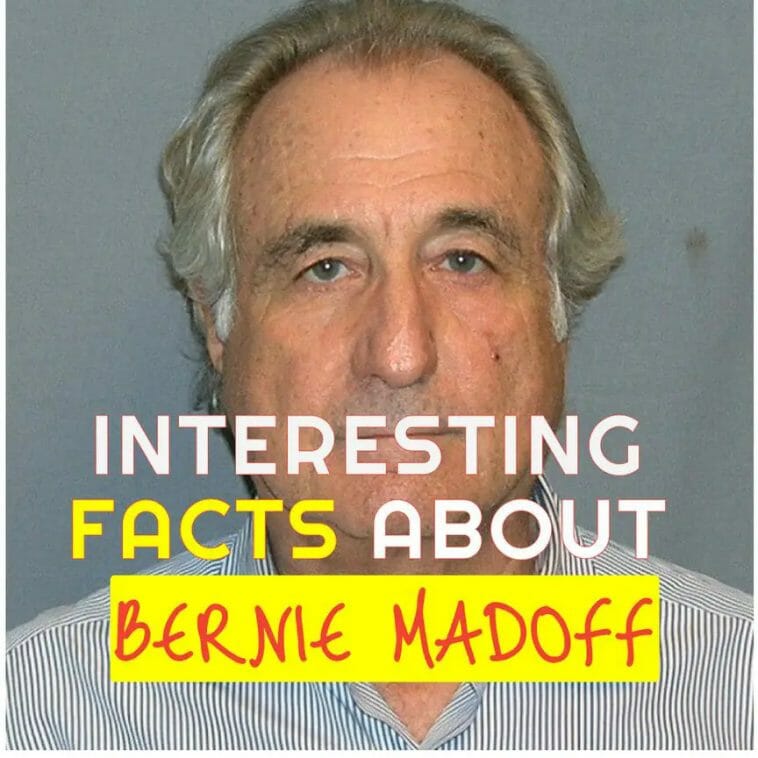 Bernie Madoff is a name that has become synonymous with fraud. Bernie Madoff was the world’s most famous con artist. He disguised himself as a respected businessman and investment consultant, but was actually a pathological liar and fraudster who stole billions of dollars from investors through a Ponzi scheme. It’s hard to believe that this man’s fraud has been called “the most destructive crime in Wall Street history.” However, there are many interesting facts about Madoff that you may not have known. Let’s find out!.


Bernard Lawrence Madoff, better known as Bernie Madoff, was born on April 29, 1938, in Queens, New York. Bernie Madoff was a former stockbroker who operated a multibillion-dollar Ponzi scam with his multibillion-dollar enterprise. In the early 1990s, he was also the chairman of the Nasdaq, a pioneer in computerised trading. On April 14, 2021, he died in prison while serving a 150-year sentence for money laundering, securities fraud, and other crimes.

Bernard Madoff had a political science degree from Hofstra University and a law degree from Brooklyn Law School. Bernard L. Madoff Investment Securities was founded in 1960 by him and Ruth Madoff. Bernie Madoff specialised in penny stocks, which were traded on the online securities market. He rose through the ranks of NASDAQ, eventually becoming a director and finally Chairman.

Ruth Madoff married Bernard Madoff while she was only 18 years old, on November 28, 1959. Mark and Andrew, the couple’s two sons, died before them. Madoff sat on the boards of a number of charitable organisations, many of which were forced to close once his firm went bankrupt. Madoff and his wife have donated over $230,000 to political groups since 1991.

Bernie Madoff’s business began with a $5,000 investment he made while working as a lifeguard. The couple had $823 million in assets in 2008! Ruth Madoff, Bernie Madoff’s wife has surrendered most of the $70 million worth of her husband’s assets after his arrest on December 10, 2008 for his Ponzi scheme.

Ruth did not present in court during his trial, but she did issue a statement saying, “I’m humiliated and ashamed of myself.” I’m feeling betrayed and bewildered as well. The next day, the Federal Bureau of Investigation arrested Madoff and charged him with securities fraud. Mark and Andrew Madoff, his sons, informed investigators that their father revealed to them that his firm’s asset management unit was a major Ponzi scam.

Two significant Bernie Madoff stories have already appeared in the world of fiction: one in an HBO film, and the other in an ABC miniseries. ‘Wizard Of Lies,’ featuring Robert De Nerio as Bernie Madoff, is a well-known film on his life. The movie “Chasing Madoff” came out two years after Madoff’s arrest!

Bernie Madoff’s famed Ponzi scam lasted 17 years, deceiving and manipulating thousands of Madoff’s investors. Madoff was charged with false filings, mail fraud, and wire fraud while imprisoned in the FMC Butner jail in North Carolina. The Ponzi scheme gets its name from Charles Ponzi, a con artist who promised an extremely high return on investment in just 90 days and went to prison for 14 years in 1920.

Madoff took advantage of funds, laundered money, and began operating a Ponzi scheme during this time of the year. This is a criminal practise in which investors are mislead about the source of their investment income, but are exploited by a large number of other potential investors, resulting in income that is not derived from the actual investment.

Madoff admitted to a $65 billion Ponzi scheme and was sentenced to prison. Madoff Securities, founded by Bernard Madoff, used to be the largest market maker on the NASDAQ. It was the S&P 500’s sixth-largest market maker in 2008. Madoff was sentenced to 150 years in jail after pleading guilty to the charges. The Wall Street Journal reports that federal officials are still investigating Peter Madoff’s tax fraud.

Irving Picard, a New York lawyer, has recovered $13.3 billion in damages for investors victimized by Madoff and his firm. According to court documents, the con artist’s scheme began in the 1960s and lasted more than five decades. Thousands of investors lost their life savings after he pled guilty in 2009 and was sentenced to life in prison.

Over $2.7 billion had been given to 37,011 Madoff victims in the United States and elsewhere. Richard Breeden, a former SEC chairman who is managing the fund, thinks that the fund has more than 11,000 “feeder” investors. Breeden stated that the fund anticipates making “at least one other major payout in 2019.”