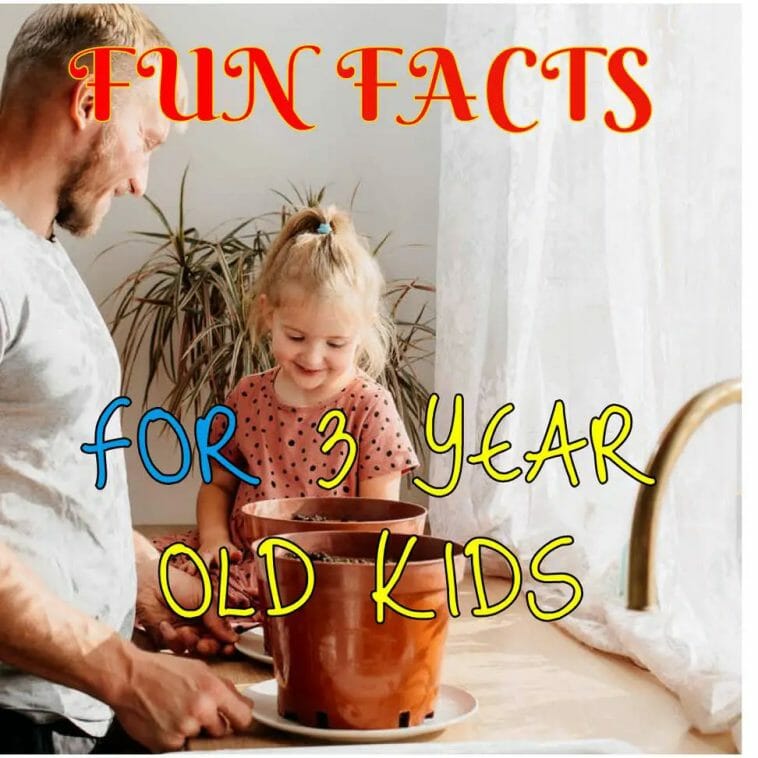 Kids are curious and full of questions. So your 3-year-old is really starting to show an interest in learning about the world. You’re not alone. Most 3-year-olds are ready to learn more about the people and places that make up their world. With that in mind, here are some fun facts on a variety of subjects that they may find interesting.

Contents for Fun Facts for Your 3-year-old Kids

• Poop comes out of the top of starfish’s bodies.

• To keep themselves clean, cats and dogs lick their bodies.

• Kittens are the name given to young beavers.

• The skin of Polar Bears is black, despite their white, fluffy fur.

• The world’s largest rat is the size of a dog.


• Pups are the name given to baby sharks and bats.

• When a bee flaps its wings, the sound it makes is called “buzzing.”

• When a starfish loses a leg, it regenerates.

• The sun could fit a million Earths inside it!

• Venus is the only planet that rotates in a clockwise direction.


• On Venus, one day is equivalent to nearly eight months on Earth.

• The universe contains more stars than the Earth’s sand grains.

• Mercury and Venus do not have moons.

• The hottest planet in the solar system is Venus.

• Applesauce was the first food eaten in space.

• The sun has been around for 4.6 billion years.

• The sun is made up of roughly one-quarter helium.

• There is no noise in space.

• You always see the same side of the moon no matter where you are on Earth.

The human body is amazing

• A trillion odours can be detected by the nose.

• Your feet house one-quarter of your bones.

• The teeth of humans are as powerful as those of sharks.

• It’s impossible to swallow and breathe at the same time.

• The only animals having chins are humans.

• Your ears and noses are always growing as you get older. That is due to gravity, not genuine growth.

• A human body is made up of almost 100 trillion cells.

• Eyelashes last approximately 150 days before they fall off.


• The average human brain is roughly three pounds in weight.

• Your blood has the same saltiness as the sea.

• In Iceland, there are ice caves with hot springs.

• Every year, over 1200 tornadoes strike the United States.

• Clouds appear white because they reflect sunlight from above.

• It’s possible that it’ll be too warm to snow, but it’ll never be too cold.

• Snow is made inside clouds and is made up of teeny-tiny ice crystals.

• The Sahara is the world’s largest desert (outside of the polar regions), covering almost one-third of Africa!

• The Earth is estimated to be between 4 and 5 billion years old, according to scientists.

• The Niagara Falls are on the boundary between the United States and Canada.

Having fun with food

• Grapefruits get their name from the fact that they grow in clusters similar to grapes.


• Almonds and peaches belong to the same plant family.

• Red bananas have a reddish-purple peel and a strawberry-like flavour.

• Food provides us with energy, while vitamins and minerals aid in our growth.

• Milk is a rich source of calcium, which helps develop strong bones.

• Sweet potatoes are a root vegetable unrelated to potatoes.

• People used to write on clay with sticks or their fingers before paper was invented.

• Soil is a living thing. It moves, changes, and grows all the time. The soil is full of tiny plants and animals.


• One cup of soil could contain more bacteria than people on the planet.

• Every minute, two earthquakes strike somewhere on the planet.

• Cockroaches have been on the planet for roughly 300 million years, dating back to the time of the dinosaurs.

• Alaska is the state with the most earthquakes in the United States.

• 130 years ago, the first paper drinking straws were created. People used to drink from hollow rye grass before then.


• A power facility in the Netherlands uses methane, a gas derived from chicken poop, to power nearly 100,000 households.