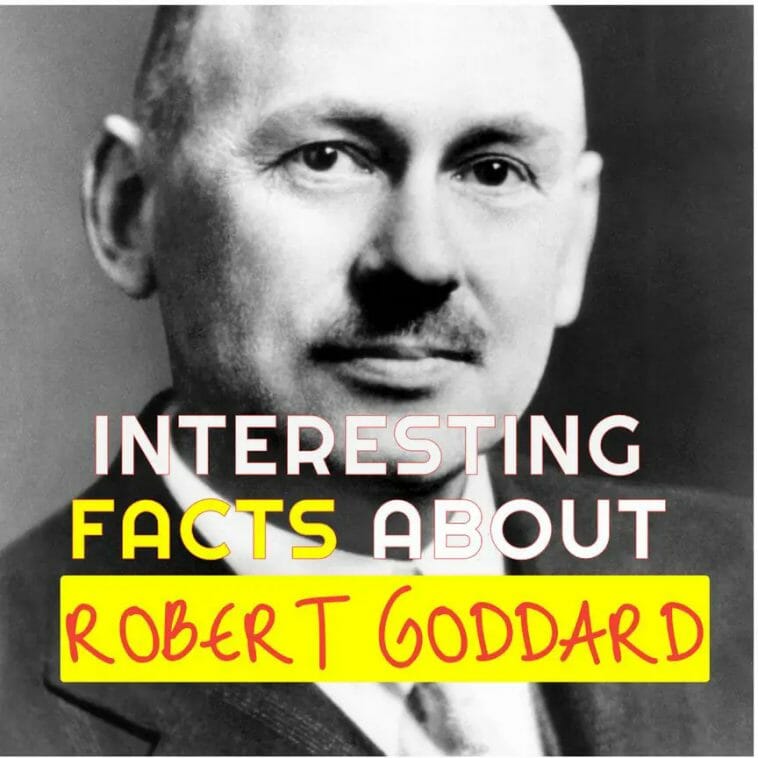 Robert Hutchings Goddard was an American scientist and inventor who is best known for his contributions to rocketry and astronautics. He is recognized as the “father of modern rocketry.” In fact, he was able to put into practice many of the earliest ideas about space travel, including a multistage rocket, liquid-fueled rocket engine, gyroscopic guidance system, and oscillating engine. These innovative theories allowed humans to explore the earth’s atmosphere and beyond.

In this blog post we’ll take a look at some interesting facts about Robert Goddard that you may not know about him.

Robert Goddard was the sole surviving child of Fannie Louise Hoyt and farmer Nahum Danford Goddard. Robert’s parents supported his interest in science by giving him a microscope, a telescope, and a Scientific American subscription. Robert grew obsessed with space flight after reading “The War of the Worlds” at the age of 16.

Robert Goddard attended South High Community School from 1901 to 1904. He got a B.S. in physics from Worcester Polytechnic Institute in 1908. Goddard obtained his master’s degree in physics from Clark University in Worcester after teaching for a year. He earned his doctorate in 1911 and spent a year as an honorary physics fellow at Clark, teaching and conducting rocket experiments.

2. In many ways, Robert Goddard was ahead of his time.

His colleagues didn’t understand what he was doing, and he had a hard time gaining funding for his investigations. By 1915, he was pondering giving up his job because no one else seemed to think it was worthwhile. Although his first gunpowder rocket was successfully launched in 1915, he soon found they were inefficient at transferring energy into movement. The following year, he used de Laval nozzles to increase the rocket’s efficiency.

In 1917, Goddard acquired financing from the Smithsonian Institution in Washington, D.C., to pursue his research of rockets that could reach the upper atmosphere to discharge weather recording instruments.

3. Robert discovers that liquid oxygen was the key ingredient for rocket combustion.

He proved that rockets powered by atmospheric oxygen could never fly in space because there isn’t enough oxygen for combustion to take place. Goddard also established that the rate of combustion is proportional to the amount of oxygen present, and he developed a rocket that used a mixture of gasoline and liquid oxygen as fuel.

4. Robert Goddard was awarded 214 patents for his work, 131 of which came after his death.

In 1914, Goddard received two patents in the United States. Two of Goddard’s 214 patented discoveries, a multi-stage rocket (1914) and a liquid-fuel rocket (1914), were key steps toward spaceflight. On November 2, 1915, Goddard received a patent for his invention of a vacuum tube that amplified radio transmissions.

5. Robert Goddard was an important figure in the creation of rockets and space exploration.

Robert launched his first liquid-fueled rocket on March 16, 1926, reaching a height of 41 feet and a speed of roughly 60 miles per hour. Indeed, Goddard’s rocket flight in Auburn, Massachusetts, was as historic as the Wright brothers’ flight at Kitty Hawk.

Robert Truax, Buzz Aldrin, and Jim Lovell, NASA flight controller Gene Kranz, astrodynamicist Samuel Herrick, and General Jimmy Doolittle were all influenced by Goddard. On his momentous flight to the Moon onboard Apollo 11, Buzz Aldrin took a tiny biography of Goddard with him.

Goddard married Esther Christine Kisk in 1919. She took an interest in rocketry and helped him with tests, documentation, and accounting, among other things. The couple had no children. She sorted Goddard’s files after his death and obtained 131 more patents for his inventions. His throat cancer was diagnosed in 1945. He kept working, but could only talk in a whisper, until he needed surgery and died in August of that year in Baltimore.

The National Air and Space Administration (NASA) dedicated the Goddard Space Flight Center in Greenbelt, Maryland, on May 1, 1959, in honour of Robert H. Goddard. Goddard crater on the Moon is also named after him. In 1960, the Smithsonian Institution awarded Goddard the Langley Gold Medal, and on September 16, 1959, he earned the Congressional Gold Medal.