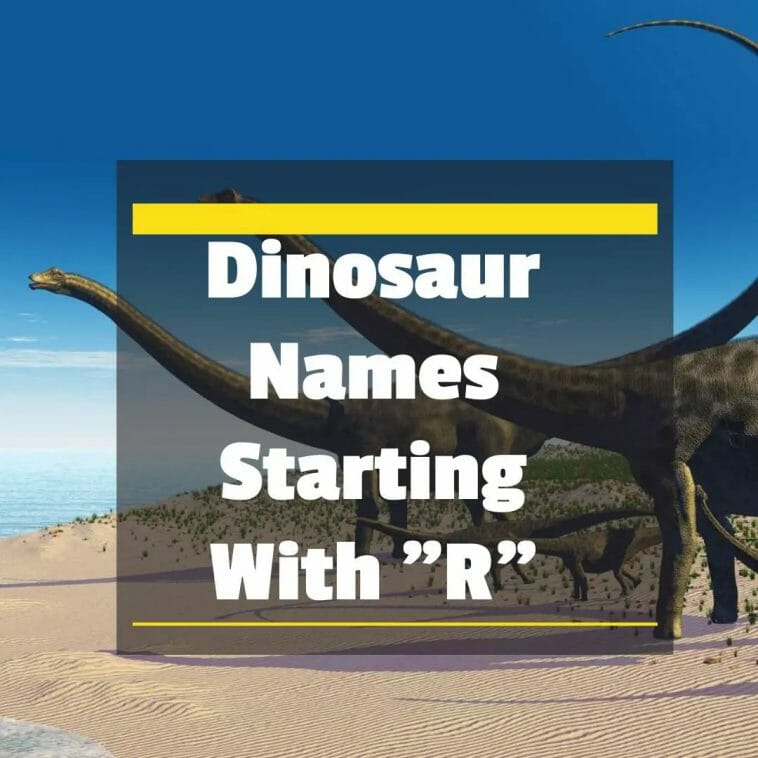 Check out the alphabetical list of dinosaur names beginning with the letter “R”. We’ll look at dinosaur pictures and discuss what their names mean, as well as learn more about dinosaur facts.

Dinosaurs with names that begin with the letter “R”

Contents for Dinosaur Names that Start with “R” 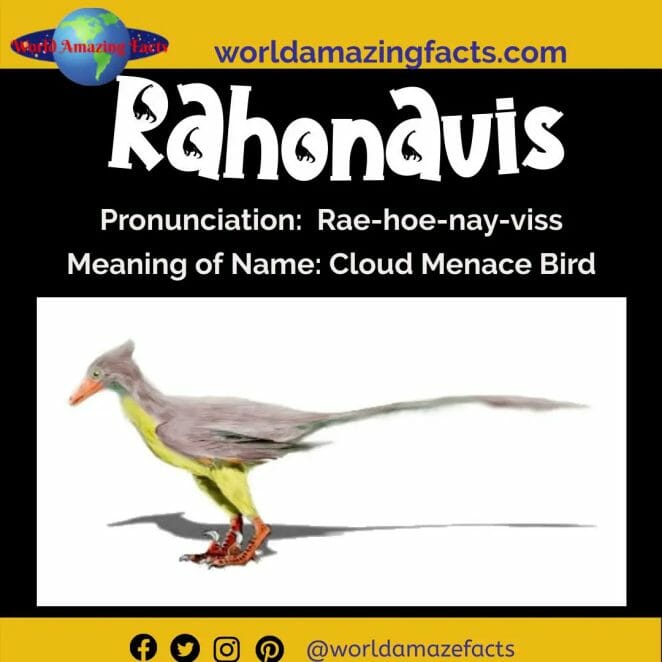 Rahonavis is a genus of bird-like theropods that lived in what is now Madagascar during the Late Cretaceous period.

The dinosaur’s name means “bird threat from the clouds” (from the Malagasy Rahon , to which the term bird – avis was added ). The genus’s original name was modified because it was already taken by a moth from the moth family. Dr. John H. Ostrom is honoured by the genre moniker. 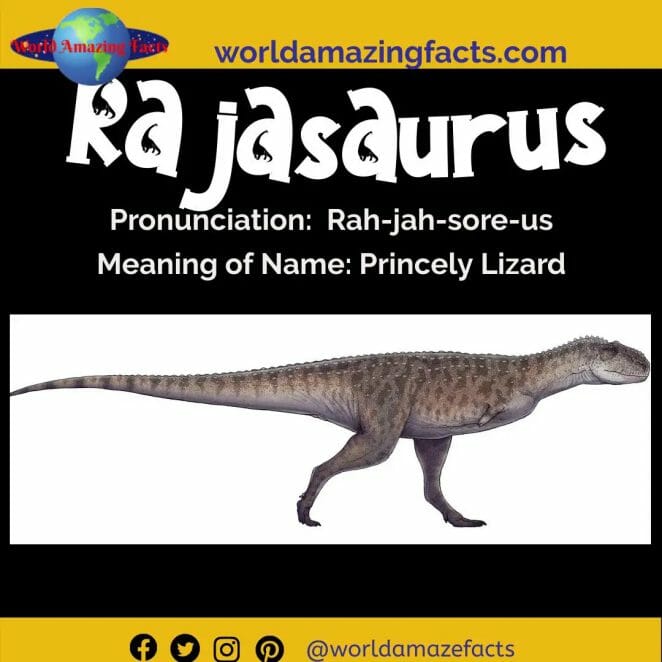 Rajasaurus is a genus of gigantic Abelisaurus that existed in what is now India during the Late Cretaceous period, around 71-65 million years ago (Maastrichtian).

Its name means “princely lizard,” while the genre name derives from the valley of the Narmad River, where the bones were discovered. 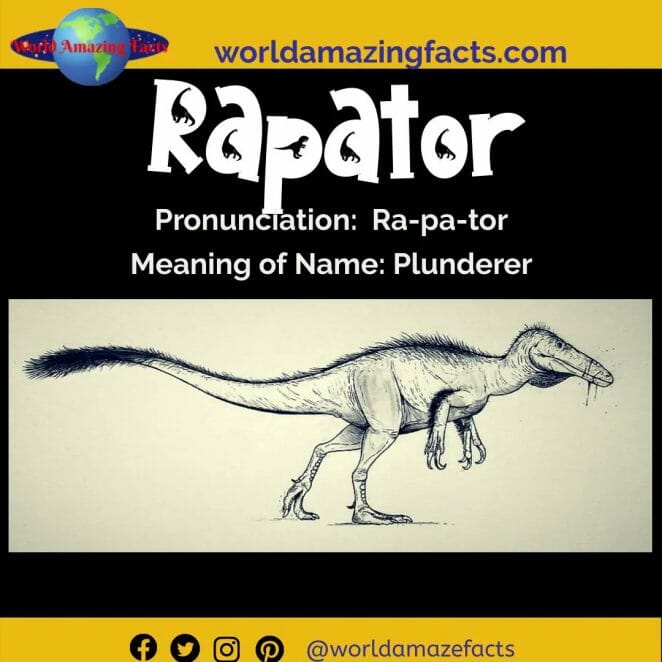 The Rapator is a strange theropod that lived in early Cretaceous Australia. 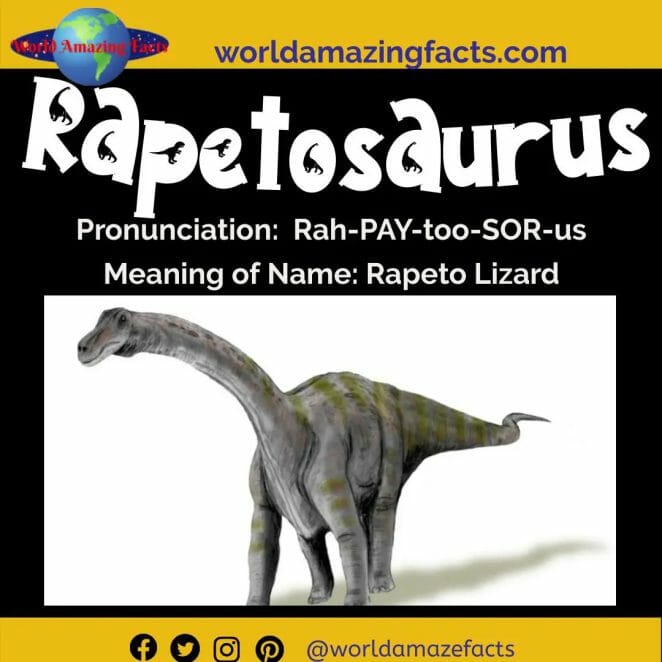 Rapetosaurus is a small sauropod that lived in Madagascar around 70-66 million years ago during the Late Cretaceous period. Rapetosaurus krausei is the only species. It was a quadrupedal, herbivorous dinosaur that lived in herds like other sauropods. Rapetosaurus is the first titanosaur whose bones were discovered as an almost complete skeleton with a skull.

Rapetosaurus krausei translates as “Rapet and Krause lizards.” The name “Rapeto” comes from Malagasy tradition, and the Greek word sauros means “lizard.” This dinosaur’s species name honours David W. Krause, the expedition leader who discovered many of the remains in Madagascar. 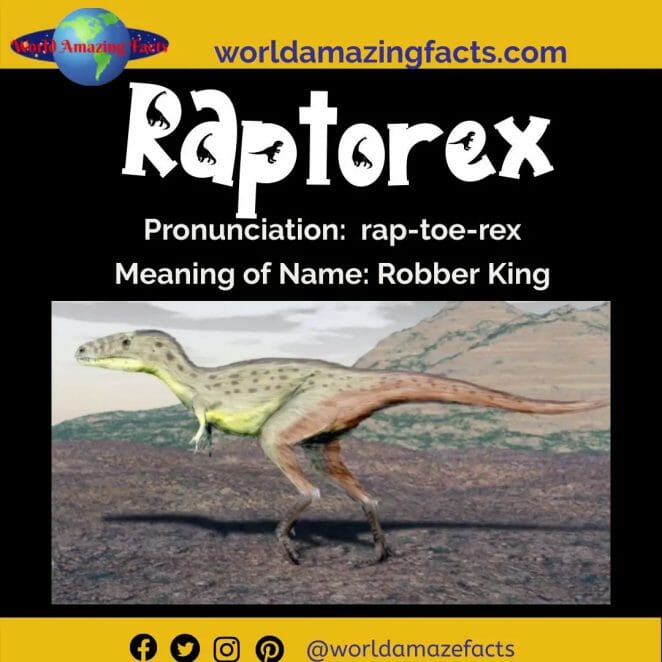 Raptorex has been characterised as a small but advanced early Cretaceous Tyrannosauroid from Asia, however it could be a juvenile from one of the group’s larger late Cretaceous members, such as Tarbosaurus.

Raptorex is a combination of the Greek words raptor (robber) and rex (king). The species name was given in honour of Roman Kriegstein, who made the characteristic specimen available to scientists. 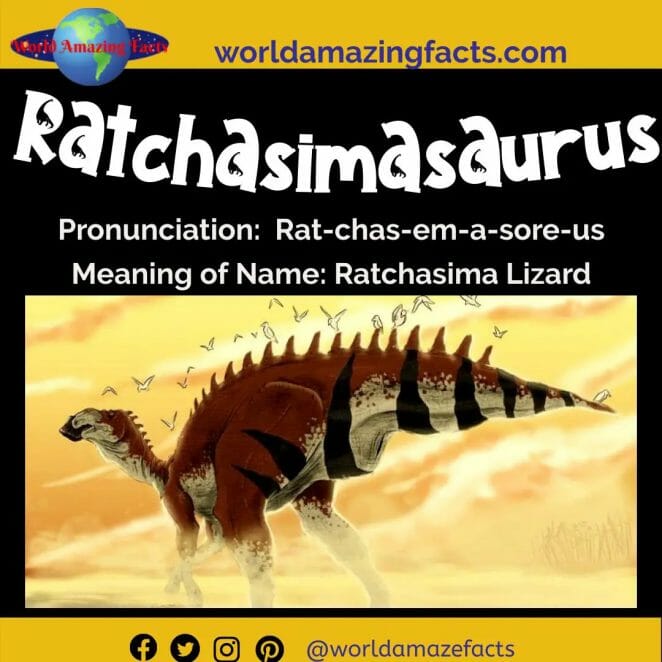 Ratchasimasaurus is named after the city of Nakhon Ratchasima, where the holotype of this species was discovered. The genre name (suranareae) honours Thao Suranari, who protected Nakhon Ratchasim from a rebel army in the nineteenth century. 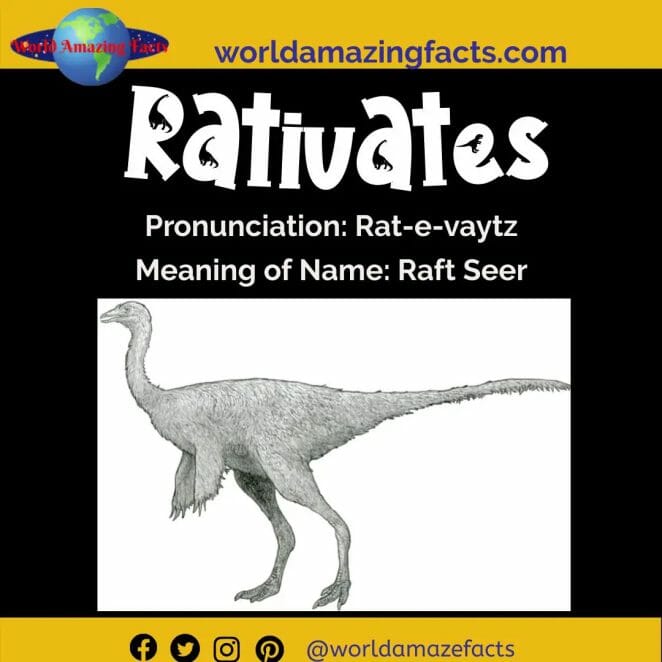 Rativates was an ornithomimosaur that lived in what is now North America during the Late Cretaceous period. Initially, Rativates remains were thought to be Struthiomimus altus specimens. It was only in 2016 that it was given its own genus and species.

Rativates is derived from the Latin words ratis, which refers to the ratites (Ratitae), which are non-flying birds without a sternum crest, and vates, which means “clairvoyant.” It relates to the dinosaur’s resemblance to current ostriches, which was thought to “predict” their subsequent existence.

In turn, the genre name is derived from the Latin evadere, which means “to dodge” or “to slip away.” It relates to the fact that it was successfully discovered and named only 80 years after the discovery of the holotype, reflecting the claimed ability of ratiwates to elude predators at the time (McFeeters et al., 2016). 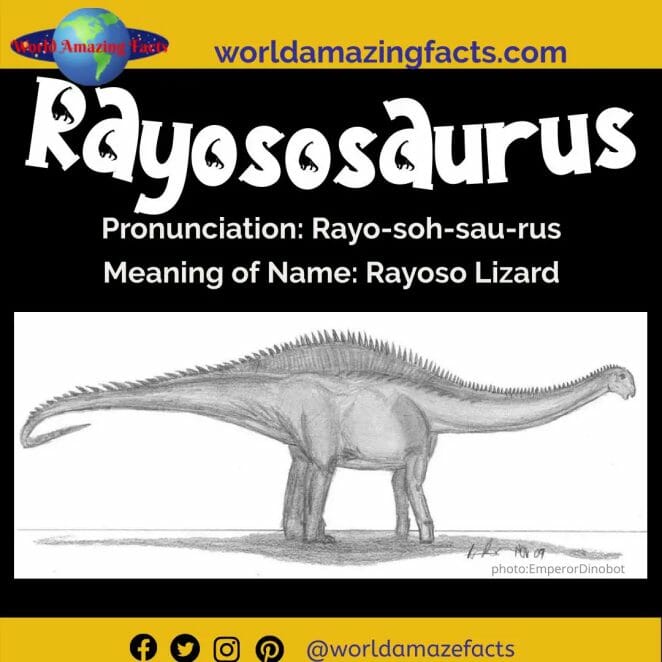 Rayososaurus is an unknown genus of possibly medium-sized Rebbachisaurids that lived during the Early Cretaceous in what is now west-central Argentina. Rayososaurus generic and species names were derived from the location of the bones’ discovery—the Rayoso Formation and the city of Agrio del Medio. 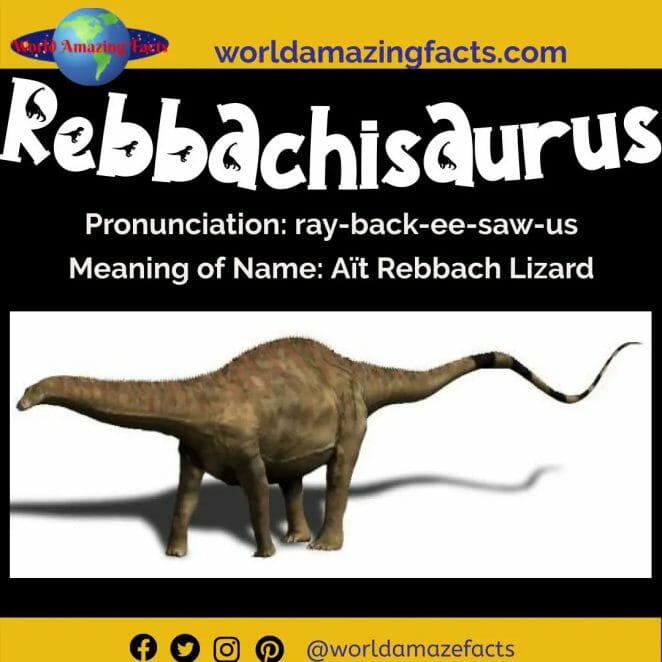 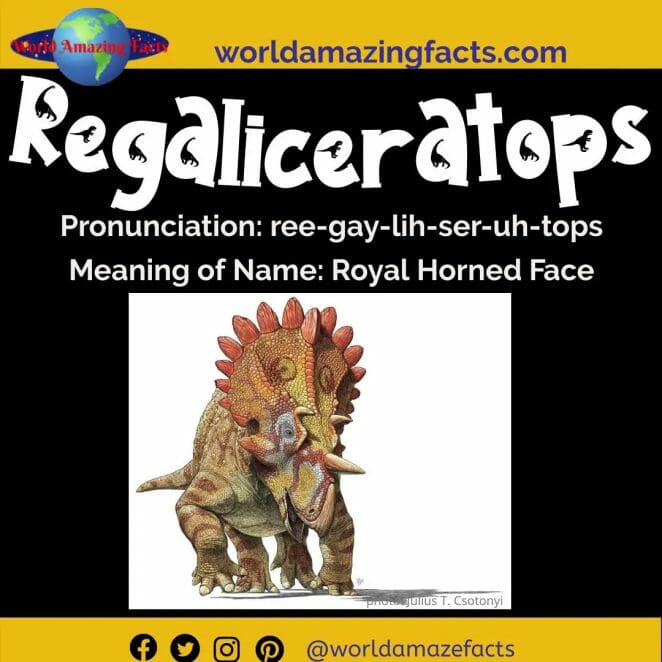 Regaliceratops peterhewsi is a fascinating Chasmosaurin species from the Late Cretaceous. The fossilised remains of Regaliceratops were discovered in today’s Canada (northwestern Alberta) and are dated to the “middle” Maastrichtian.

Regaliceratops is a combination of the terms Latin regalis (royal) and Greek ceratops (horned face). As a result, the entire name can be translated as “royal horned face.” Peter Hews, the discoverer of the holotype, is honoured by the genre epithet peterhewsi. 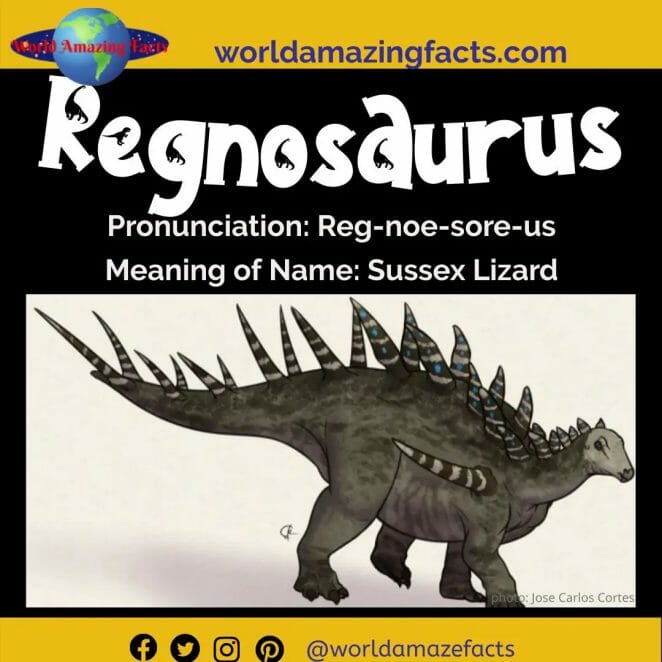 Regnosaurus is a dubious early Cretaceous thyrophore described from a fragment of a tooth bone (BMNH 2422) and maybe from a pubic bone and an osteoderm. The remains were discovered in Cuckfield, Sussex.

This dinosaur’s name means “Sussex Lizard” – the location where its fossilized bones were discovered – and relates to the Celtic tribe of RegNow. 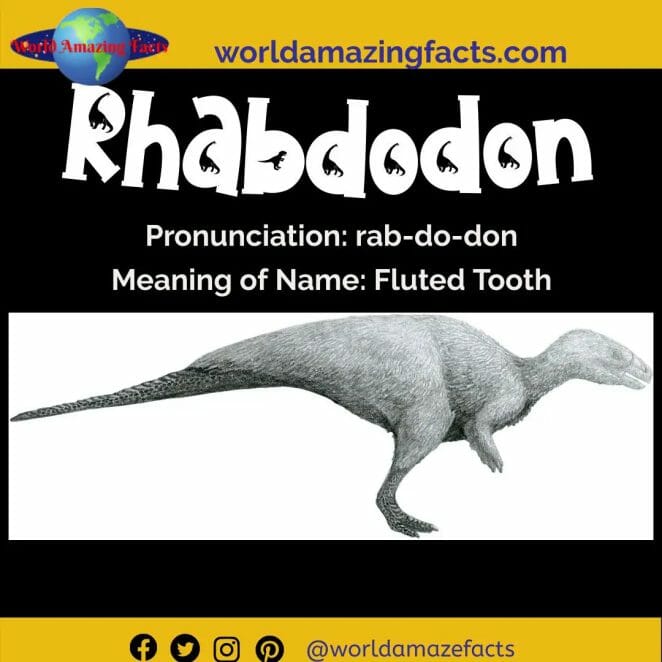 Rhabdodon was a prehistoric iguanodont that lived in Europe during the end of the dinosaur era. Rhabdodon was short and stocky. Rhabdodon inarticulate remnants are rather widespread in various European areas. Rhabdodon means “fluted teeth” in Greek. 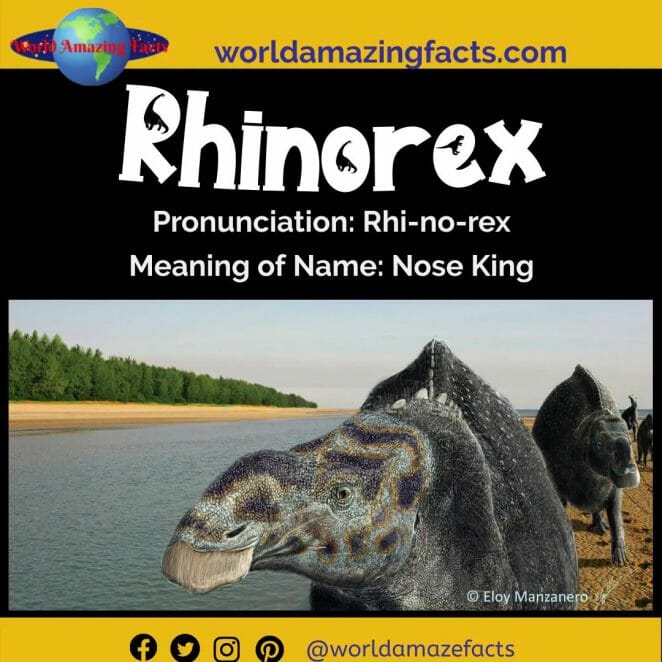 Rhinorex is a hadrosaurus that existed 75 million years ago in the present-day United States during the Late Cretaceous period. Rhinorex was linked to Gryposaurus and had a characteristic hump on its face like Gryposaurus.

Rhinorex is derived from the Greek words “rhino” (“nose”) and “rex” (“king”), which relate to this dinosaur’s enormous nostrils. The species name is derived from the Latin words “condo” (“to bury,” referring to the specimen’s location in a rock) and “rupes” (“cliff” – refers to the place where the holotype was found – Book Cliffs). 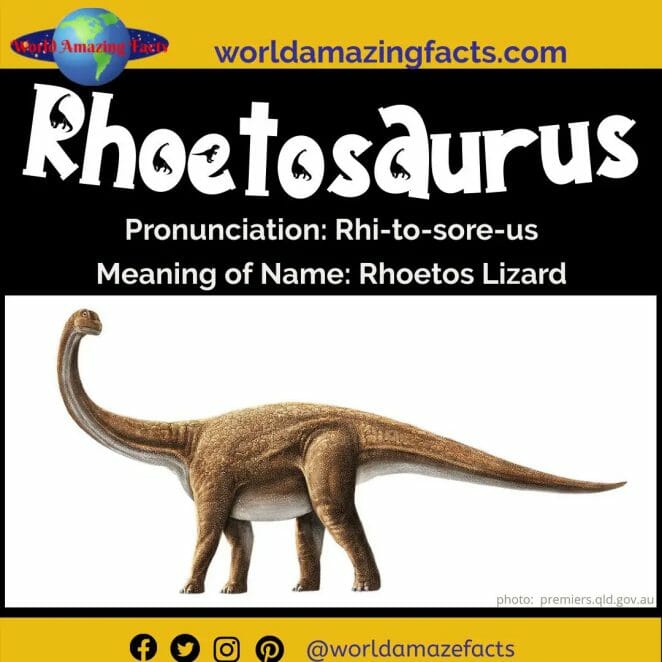 Rhoetosaurus is one of the rare sauropods known in Australia. In addition to Rhoetosaurus, we know of Austrosaurus, Diamantinasaurus, and Wintonotitan. Rhoetosaurus lived around 168-162 million years ago in the Middle Jurassic. Dr. Longman, the director of the Queensland Museum, formally described it in March 1926.

The genus name Rhoetosaurus is derived from the name of one of the titans, Rhoetus, a gigantic in Greek mythology. It was erroneously twisted by succeeding scientists. Arthur Browne is honoured by the genre name brownei. 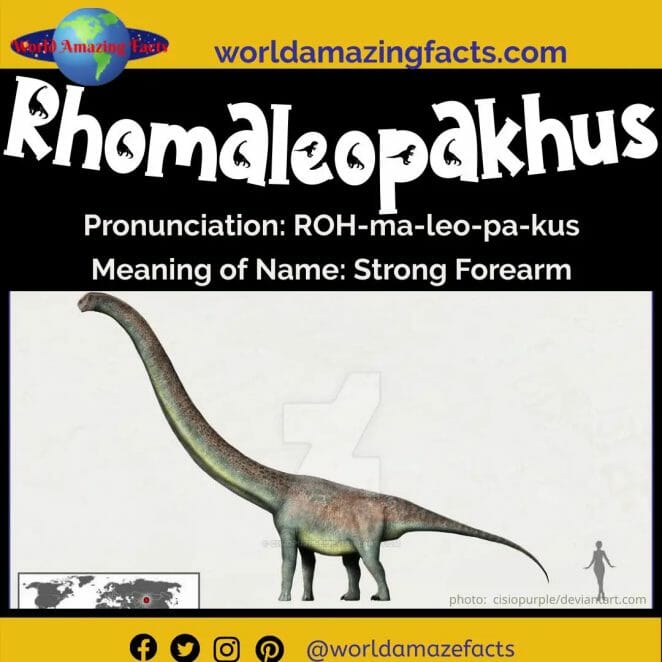 Rhomaleopakhus is a sauropoda species from the Mamenchisauridae family that lived in what is now China during the Late Jurassic period. For many years, the remnants of Rhomaleopakhus were assigned to the Hudiesaurus. Only in 2021 did Upchurch and colleagues discover a new genus and species for them.

Rhomaleopakhus is derived from the Greek terms rhomaleos and pakhus, which mean “huge” and “forearm,” respectively. It refers to the forearms’ extraordinarily enormous structure, particularly the ulna. The Turpan Basin is referenced in the genre name. 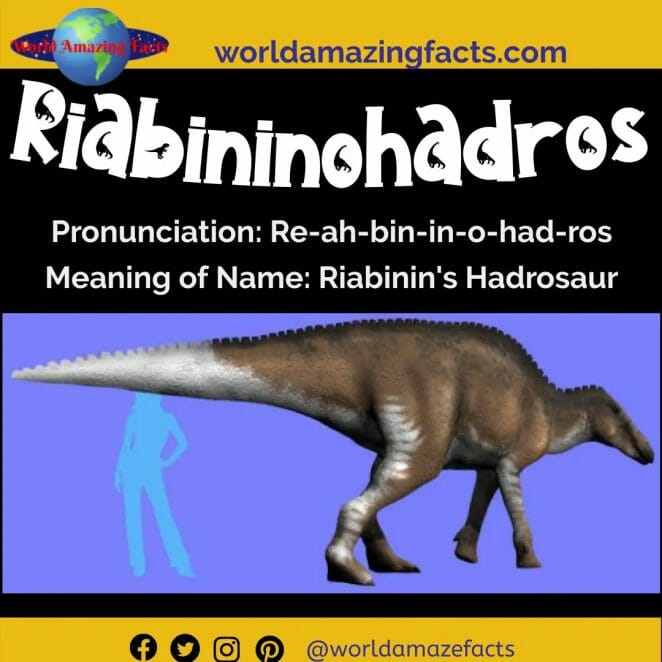 Riabininohadros is an iguanodonta from the Styracosterna lineage that lived in Europe at the end of the Cretaceous period.

Anatol Riabinin and Ulaski’s designation of this dinosaur as a hadrosaur inspired the generic name. The species name honours GF Weber, who discovered Riabininohadros remnants. 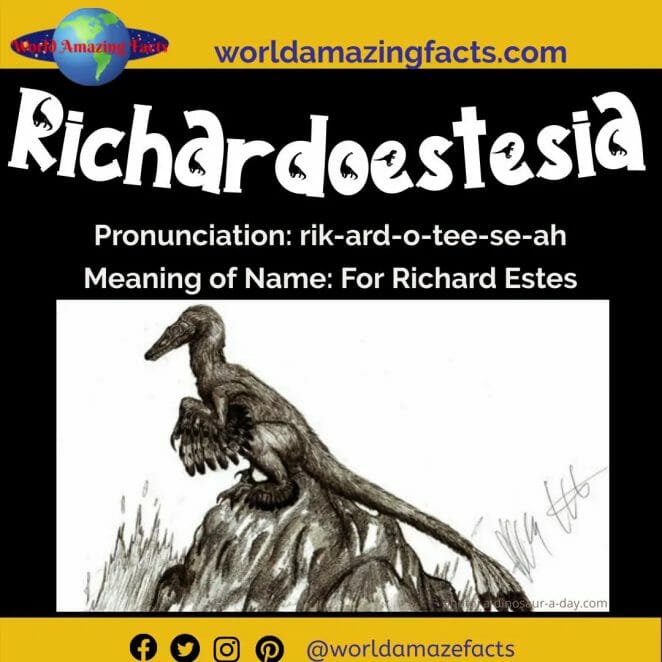 Richardoestesia is a genus of a tiny theropod, most likely of the Dromaeosauridae family, that lived in what is now the United States during the Late Cretaceous period. Unfortunately, because it is only known from teeth, its exact appearance and systematic position are unknown.

Richardoestesia is named after Richard Estes, an American palaeontologist who pioneered the study of theropod teeth. Similarly, the genre term applies to Charles Gilmore’s persona. 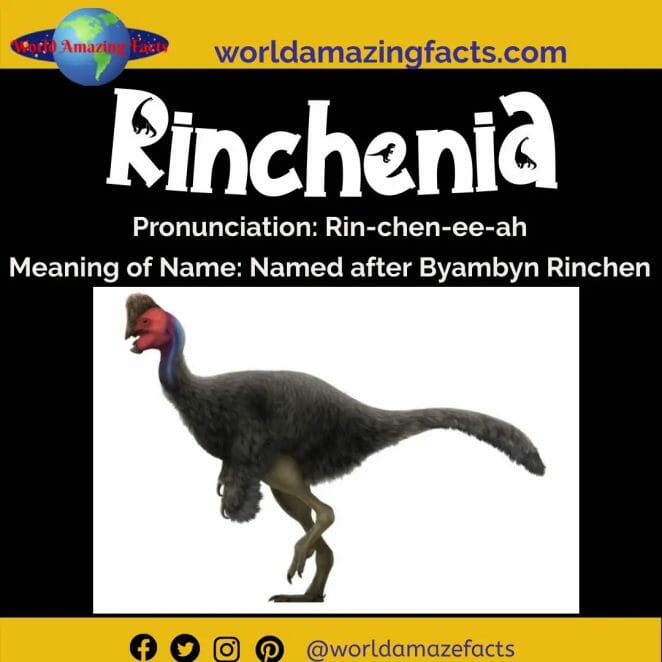 Rinchenia is a tiny oviraptorosaurus genus from late Cretaceous Mongolia. It is known from a single, nearly complete specimen. Its remains, like those of numerous other Mongolian oviraptorids, were first ascribed to the species Oviraptor.

Rinchenia is named for the eminent Mongolian palaeontologist Rinchen Barsbold. The name mongoliensis comes from the discovery of its remnants in Mongolia.