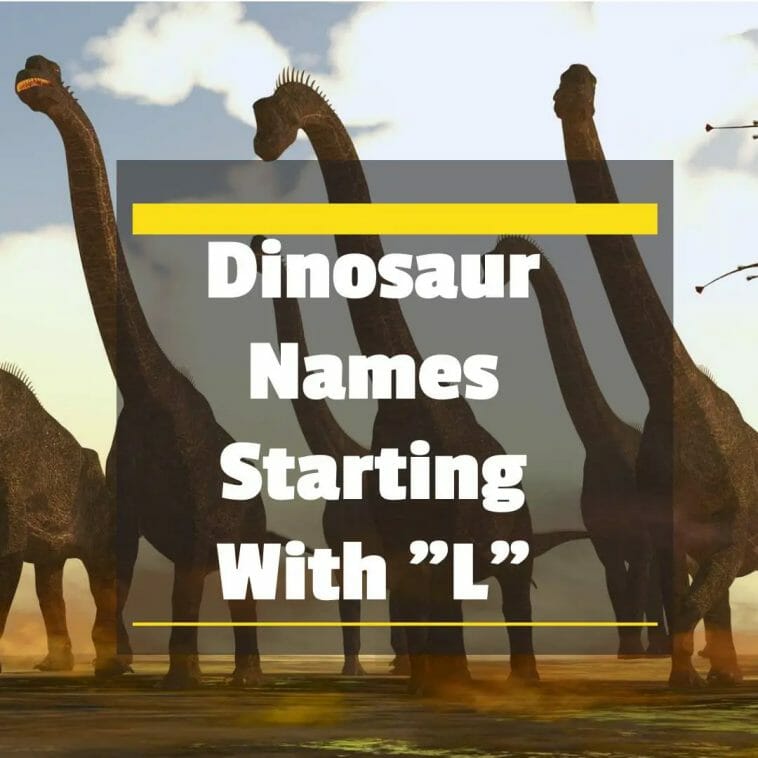 Check out the alphabetical list of dinosaur names beginning with the letter “L”. We’ll look at dinosaur pictures and discuss what their names mean, as well as learn more about dinosaur facts.

Dinosaurs with names that begin with the letter “L”

Contents for Dinosaur Names that Start with “L” 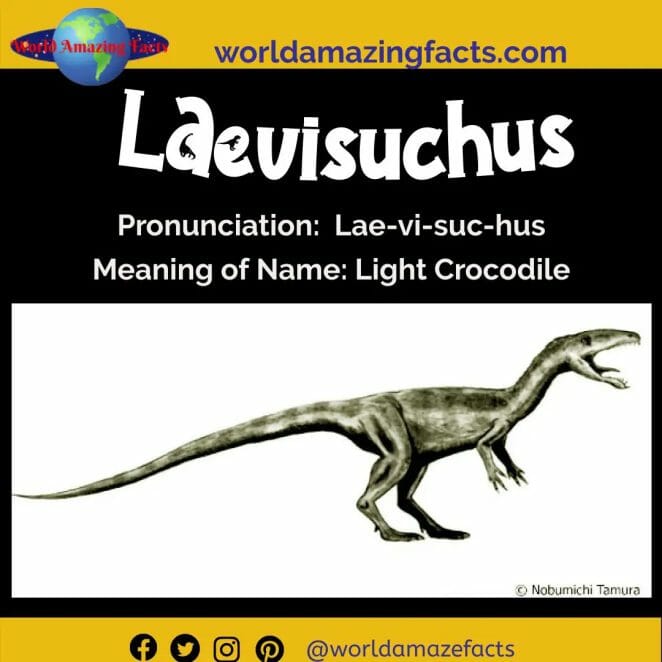 Laevisuchus fossils were discovered in the late Cretaceous Lameta Formation in India.

The genus name Laevisuchus means “light crocodile,” and it most likely alludes to the light construction of the vertebrae discovered. In turn, the species name indicus relates to the nation where his skeleton was discovered – India. 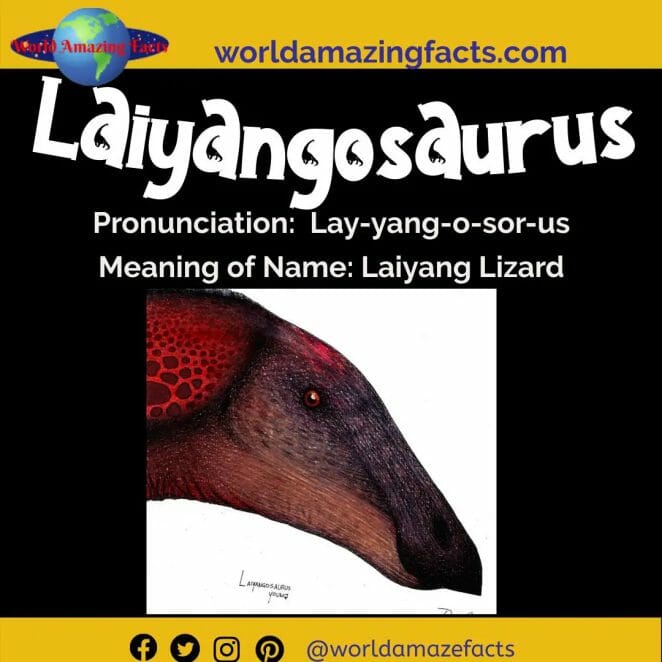 The genus name Laiyangosaurus refers to the city of Laiyang in the province of Shandong. The fossils of this hadrosaur were discovered here. The genre name youngi honours the 120th anniversary of the birth of CC Young, the father of Chinese palaeontology. He was the pioneer of palaeontology at Laiyang, where he discovered several dinosaur fossils. 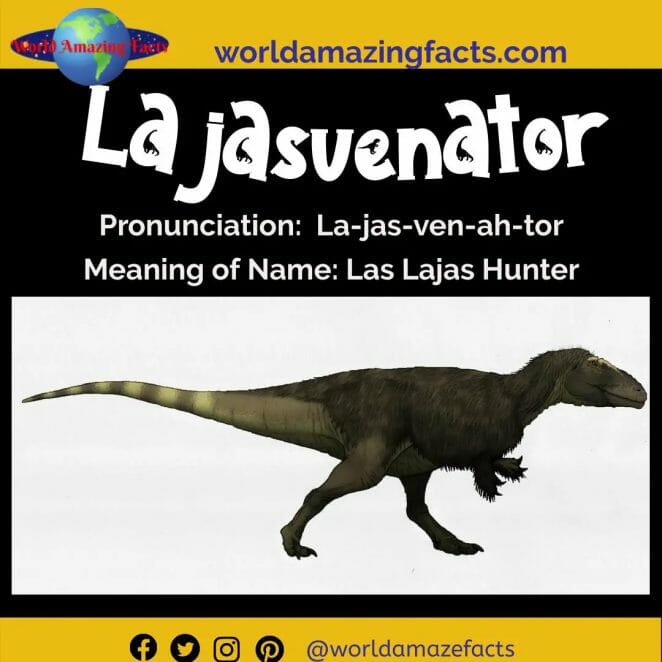 Lajasvenator was a medium-sized theropod of the Carcharodontosauridae family that lived in Argentina during the early Cretaceous period.

The name Lajasvenator is derived from the Argentine city of Las Lajas and the Latin venator (“hunter”). The genre name honours Susana Ascheri, who allowed scientists to excavate on her property. 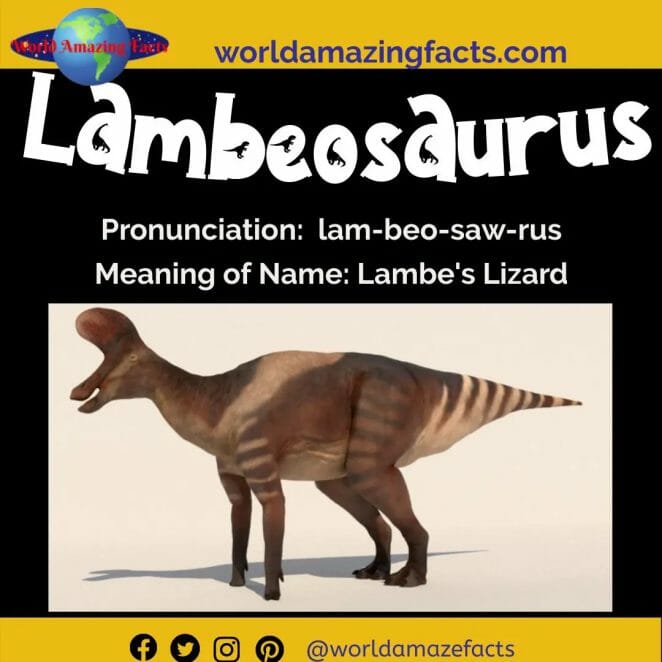 Lambeosaurus is a member of the Hadrosauridae family that lived in North America 75 million years ago, during the Late Cretaceous epoch (Campanian stage).

Lambeosaurus meaning “Lambego Lizard,” after its first discoverer, palaeontologist Lambe, who initially named it Trachodon marginatus. Dr. William Parks was the first to accurately characterise the Lambeosaurus in 1923. Many hadrosaur fossils have been unearthed. In addition, there are fossilised footprints and skin prints. 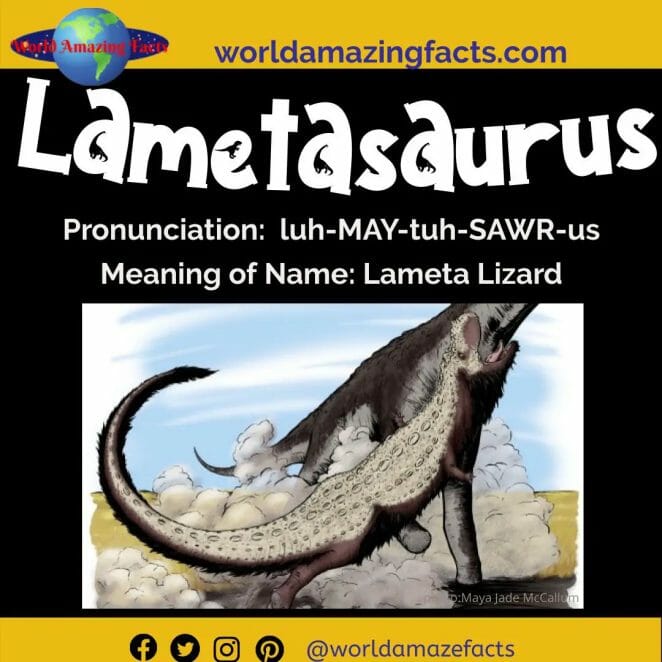 Lametasaurus is a dubious Abelisaurid from India’s Lameta Formation that lived around 70 million years ago, during the Late Cretaceous Maastrichtian period.

According to Carrano and Sampson (2008), these bones have the structure of abelisaurides, and the osteoderms most likely belonged to a titanosaur. The fact that these remains were lost makes accurate identification difficult. 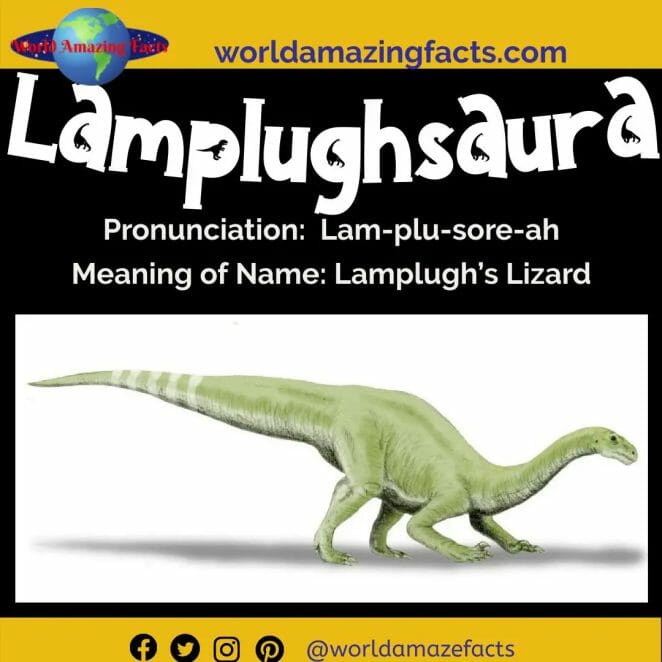 Lamplughsaura is a prehistoric sauropod that lived between 196 and 190 million years ago in India’s Sinemurian (Early Jurassic) Dharmaram Formation.

The name “Lamplughy Lizard” honours Pamela Lamplugh Robinson of the University of London, who supported and led the Information Sciences Institute (ISI) in India. The name of the species is derived from the name of the Dharmaram formation, where Lamplughsaur remains were discovered. 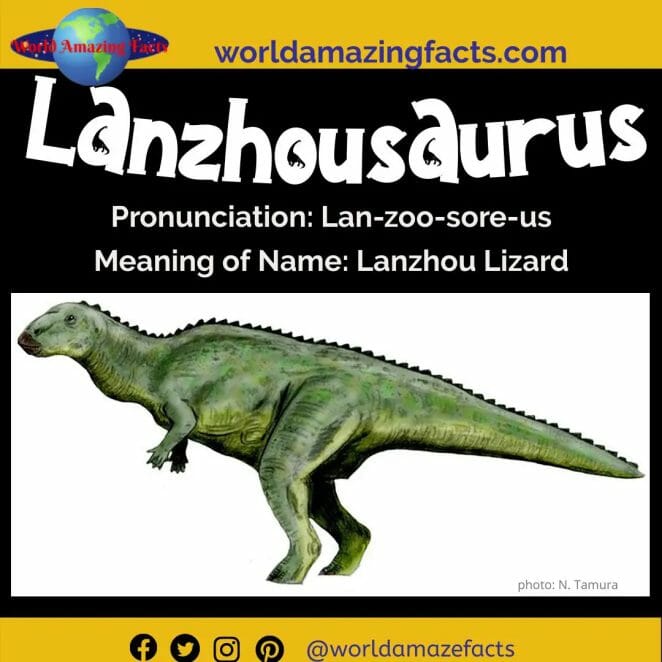 Lanzhousaurus is a big, enormous iguanodont from the Styracosterna lineage that lived in today’s China during the early Cretaceous epoch.

The generic name is derived from Lanzhou, the capital of China’s Gansu province, and the Greek word sauros (“reptile”, “lizard”). The name comes from the Latin words magnus and dens (“great” and “tooth” respectively). 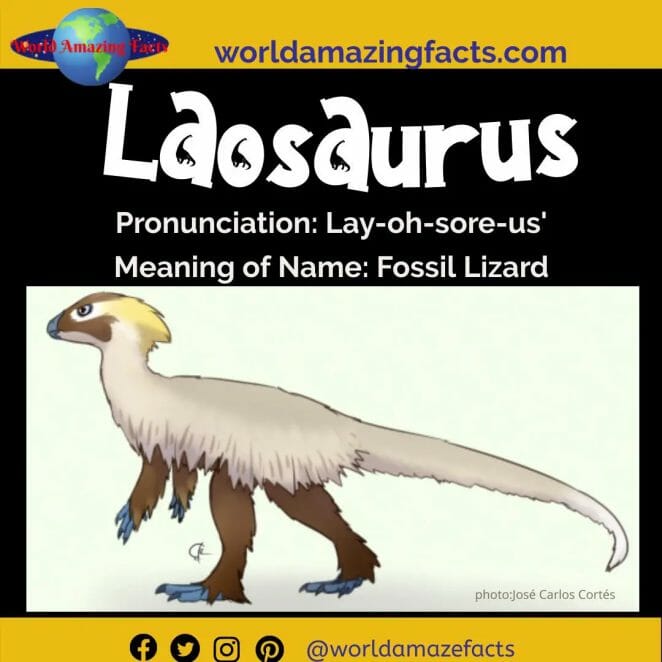 Laosaurus is a disputed type of small bird-pelvis dinosaur that existed in what is now the United States during the late Jurassic period. Five of its species have been named in total, all of which are now deemed scientifically unimportant. L. altus was assigned to the new genus Dryosaurus, whereas L. consors was assigned to Othnielosaurus, which was later regarded a synonym for Nanosaurus. The other three species are now considered nomina dubia. 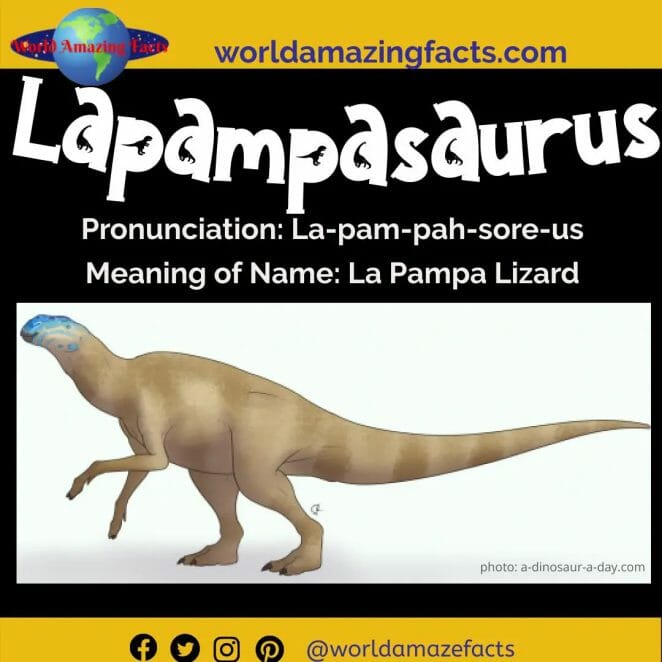 Lapampasaurus cholinoi is a hadrosaurid species from what is now South America. The rocks in which its fossilised bones were found date back to the Campanian and Maastrichtian epochs, the final two levels of the Cretaceous period. One sub-adult individual was discovered and classified as a holotype.

It was classified as a Hadrosaurid based to the presence of many Hadrosauridae synapomorphies, including the architecture of the neural arches of the cervical vertebrae, the comparatively tiny raven bone in comparison to the scapula, and the shape of the foot claw. The discovery of this Hadrosauridae clade member is significant for Late Cretaceous palaeobiogeography because it implies that there were more hadrosaurides in South America than previously supposed.

The generic name Lapampasaurus relates to the Argentina province of La Pampa, where the bones of this bird dinosaur were discovered. It directly translates to “La Pampa lizards.” The cholinoi species name honours José Cholino, who notified scientists to the discovery of his remains and assisted in their extraction. 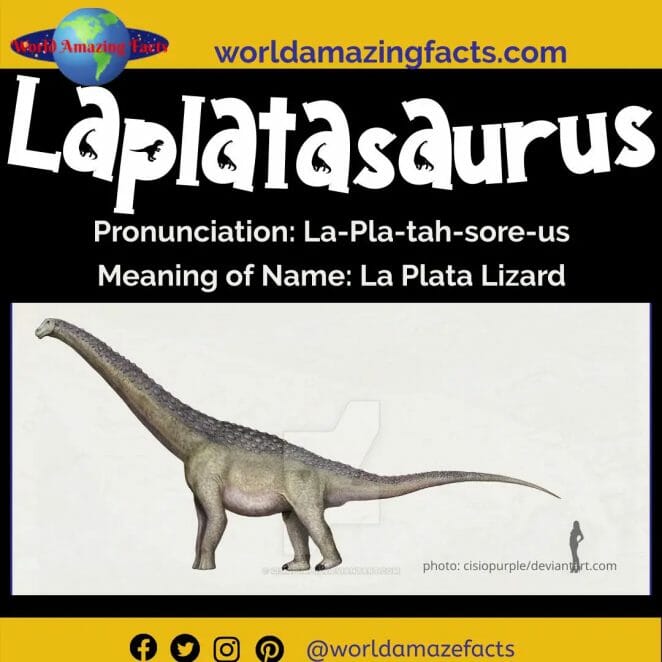 Laplatasaurus is a group of sauropods that lived in what is now Argentina during the Late Cretaceous. Not much is known about this group, though.

The name Laplatasaurus is derived from the Argentine city of La Plata and the Greek word sauros (“reptile”, “lizard”). 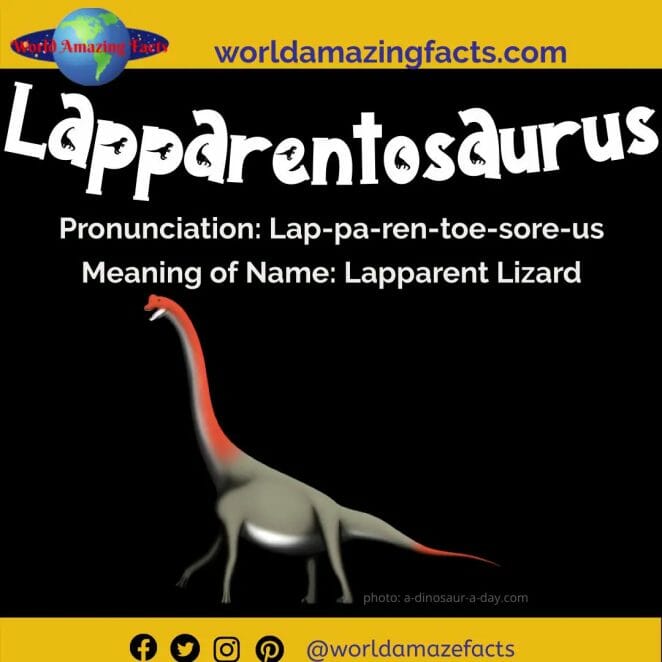 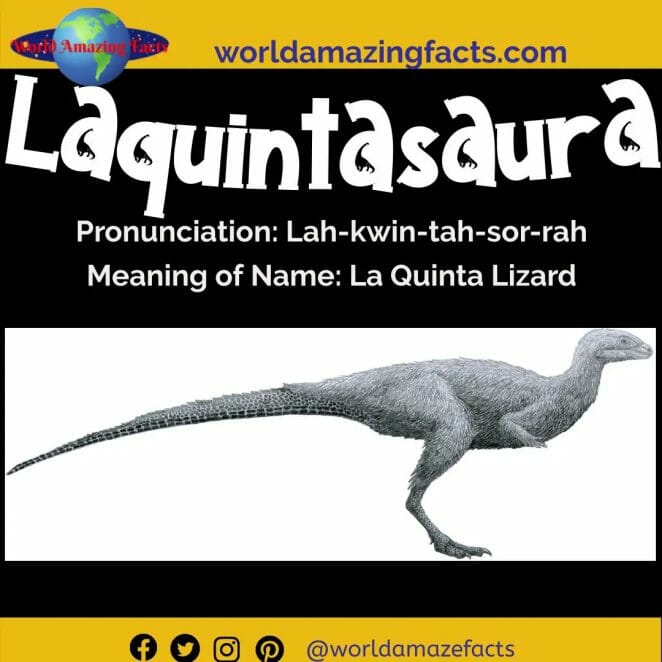 Laquintasaura (Latin Laquintasaura venezuelae) was an early bird-pelvis dinosaur that lived around 201 million years ago in what is now Venezuela. Lacquintasaurus was the first dinosaur unearthed in the Country.

The name Laquinta derives from the La Quinta formation where this dinosaur was discovered, the saura is the female version of the lizard in Greek, and the adjective venezuelae was given in honour of Venezuela and her people. 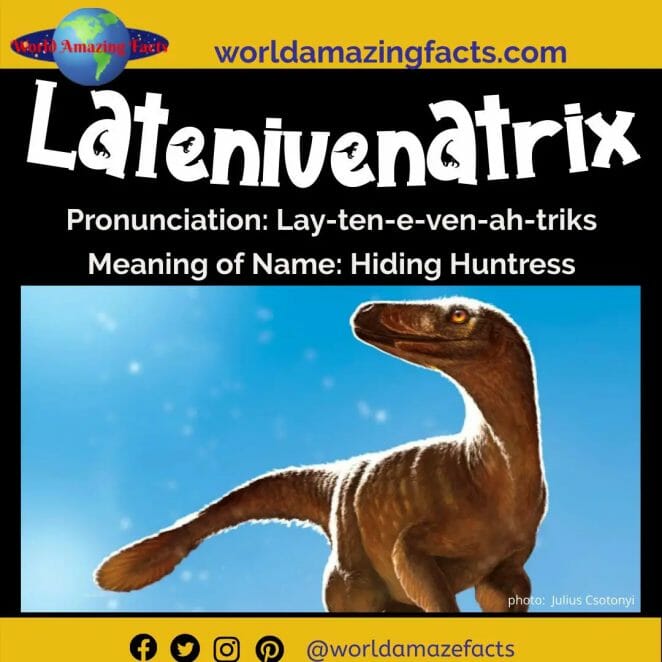 Latenivenatrix is a predatory dinosaur belonging to the Troodontidae family. Latenivenatrix existed in Canada during the late Cretaceous period. It is known from the partial bones of multiple individuals, some of which were formerly ascribed to the Troodon genus. The closest relatives of Latenivenatrix were most likely two Asian forms: Philovenator and Linhevenator.

Latenivenatrix is derived from the Latin words latens (“latent,” “hidden”) and venatrix (“venatrix”) (the female form of venator , meaning “hunter”). Thus, it alludes to the fact that the bones of this species have been known for a long time, but it wasn’t until 2017 that a new form of theropod was discovered in them. The genre name is a tribute to the mother of one of the authors, Aaron van der Reest. 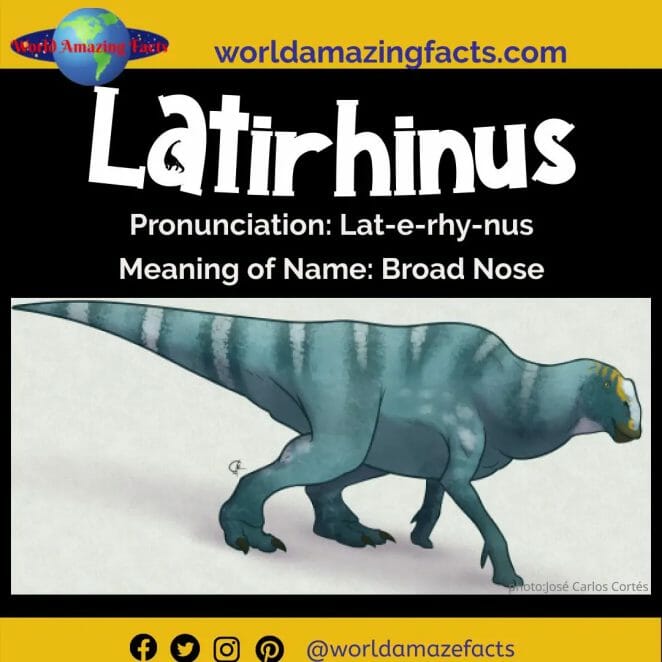 The only identified species’ generic name, Latirhinus uitstlani, is Latin for “broad-nosed,” while the genre epithet in Náhuatl means “southern.” 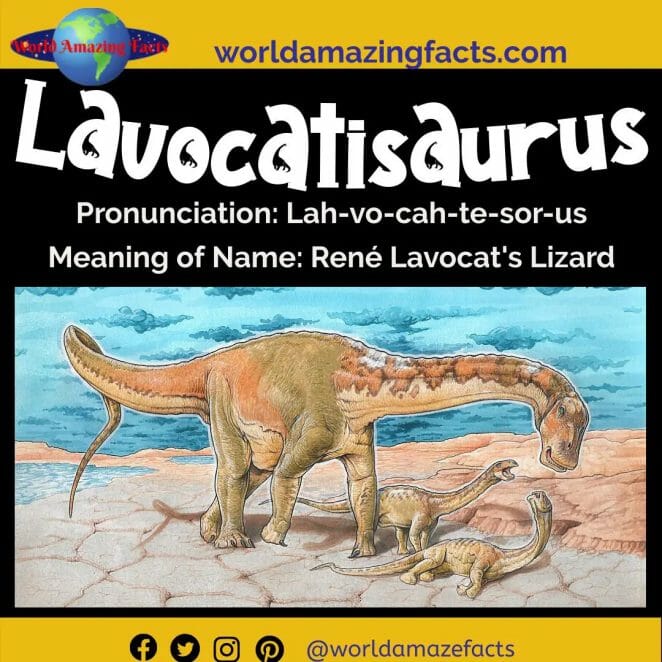 Lavocatisaurus is a genus of medium-sized sauropods from the Rebbachisauridae family that lived in Argentina during the early Cretaceous period. 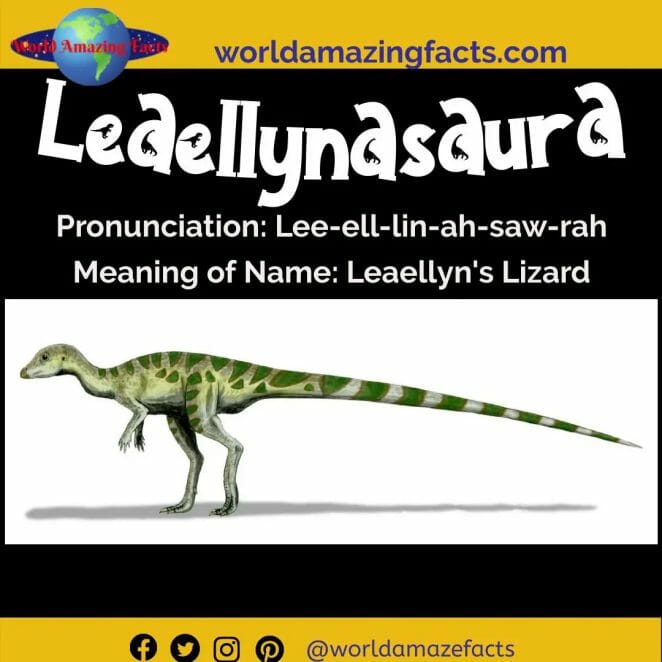 Leaellynasaura is a bipedal monophyllic dinosaur (particularly, a specimen of Neornithischia) whose bones were unearthed in Australia’s south. Thomas Rich and Patricia Vickers-Rich named this dinosaur in honour of their daughter Leaellyn, who participated in the search for the remains. 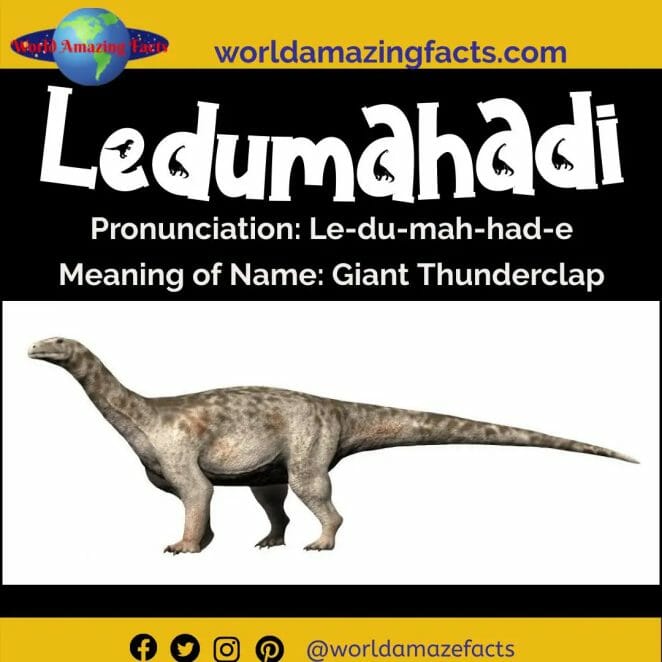 The term Ledumahadi is Sotho for “huge thunder,” referring to the enormous size of the body. The genre epithet mafube means “dawn,” “dawn,” referring to this animal’s early stratigraphic position. 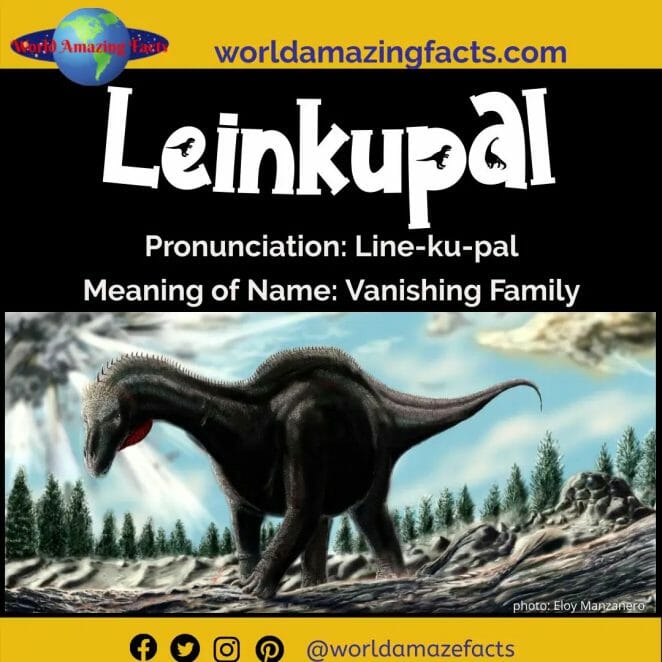 Leinkupal is a basal diplodocin from Argentina’s early Cretaceous period. An Argentine team of palaeontologists described it in 2014. This sauropod, known from only eight vertebrae, is the sole known Cretaceous Diplodocidae representative – until its discovery, it was thought that this group had been extinct by the end of the Jurassic, and that it did not occur in the southern hemisphere outside of Africa.

The generic name is derived from the terms “lein” and “kupal,” which indicate “disappearing family” in Mapuche’s Mapuche tribe in northwestern Patagonia. The name relates to the fact that this dinosaur is a vestige of the Diplodocidae family, which was nearly extinct at the time. The species name comes from the Latin words lati (for latus) and cauda, and it means “fat tail,” referring to the structure of appendages on the caudal vertebrae.