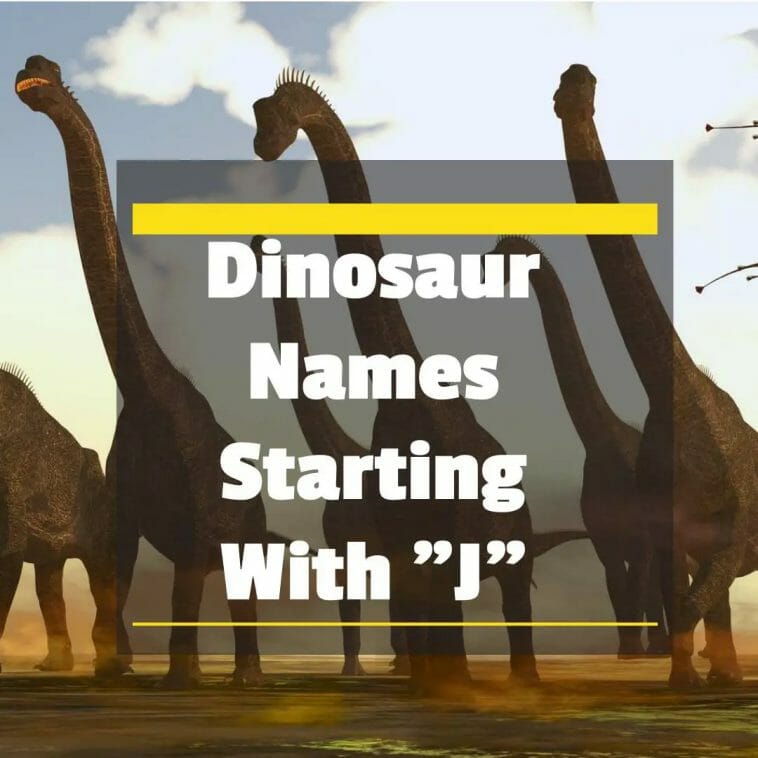 Check out the alphabetical list of dinosaur names beginning with the letter “J”. We’ll look at dinosaur pictures and discuss what their names mean, as well as learn more about dinosaur facts.

Dinosaurs with names that begin with the letter “J”

Contents for Dinosaur Names that Start with “J” 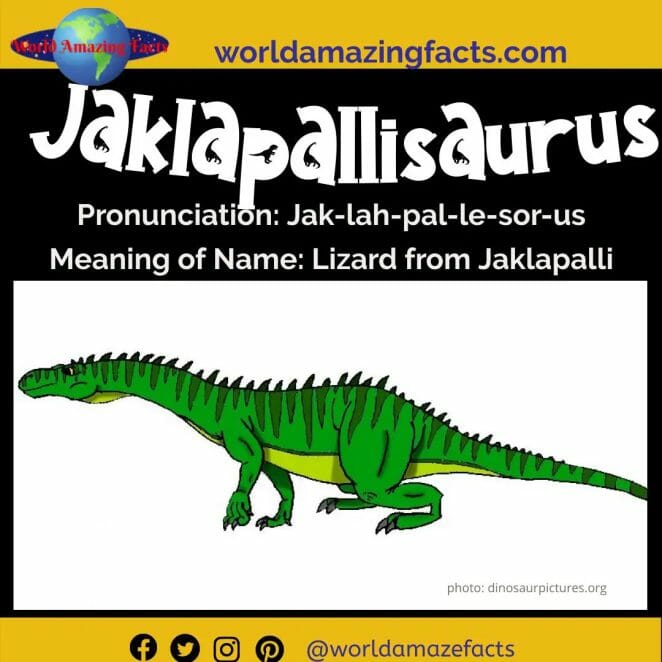 Jaklapallisaurus is a genus of sauropodomorph (Sauropodomorpha) that lived approximately 210-203 million years ago in what is now India. 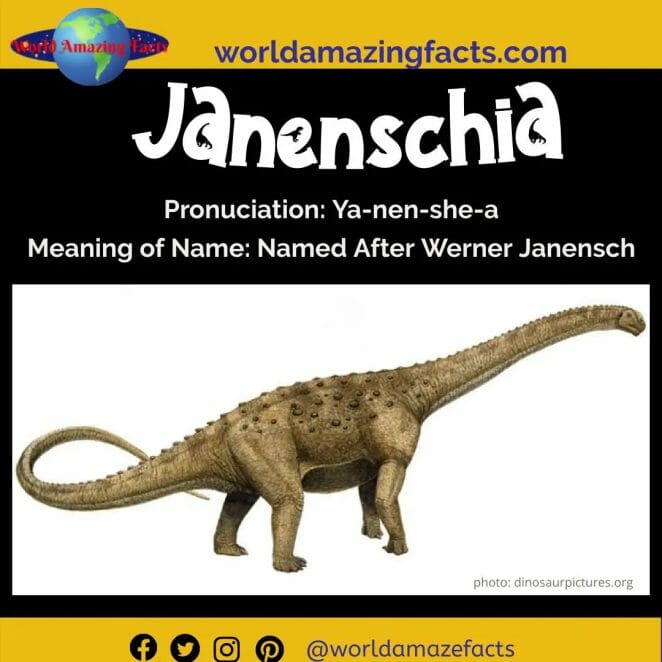 Janenschia is a large herbivorous sauropod dinosaur that lived around 155 million years ago in the Late Jurassic Tendaguru Formation of Lindi Region, Tanzania.

The generic name Janenschia honours Werner Janensch, a prominent German scholar who has led the largest palaeontological digs in history, specifically in Tendaguru, since 1909. 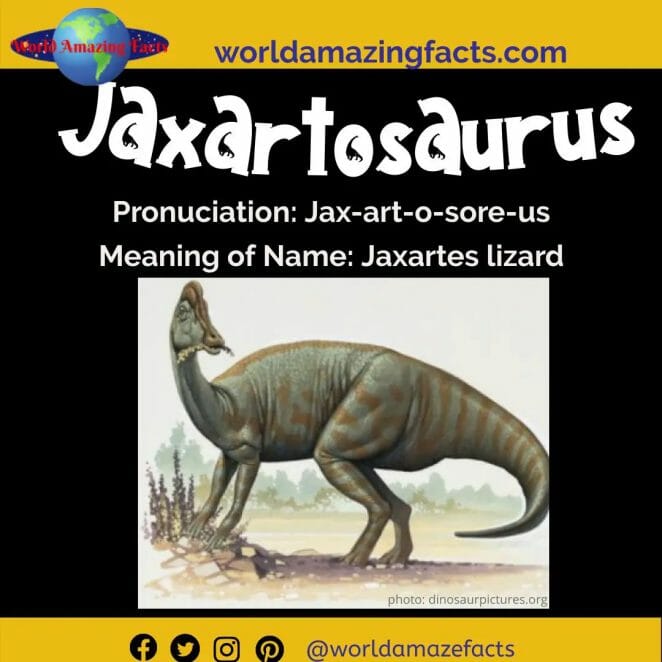 Jaxartosaurus is a kind of hadrosaurid from the Lambeosaurinae group that lived in present-day Kazakhstan during the late Cretaceous period. Riabinin described it in 1939. The name Jaxartosaurus is derived from the Greek sauros and the old name of the river Syr Daria (Jaxartes) (“reptile”, “lizard”). 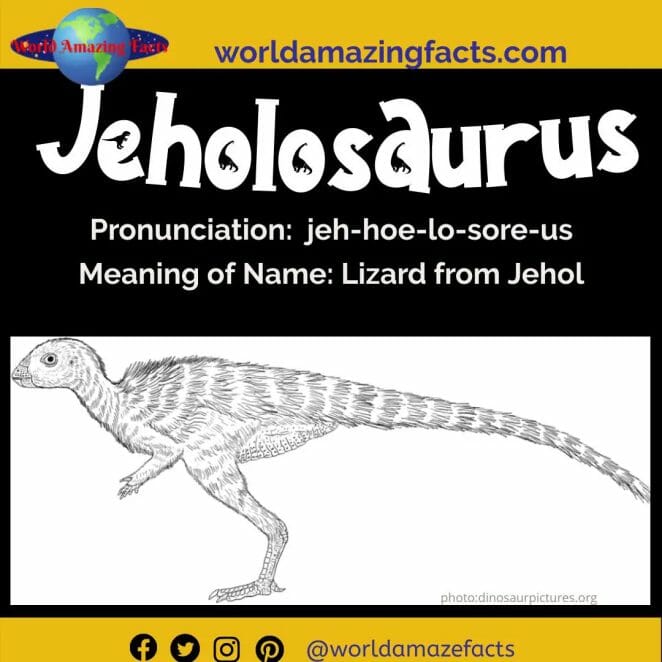 Jeholosaurus is an Early Cretaceous Period member of the Neornithischia group. It is likely to have been a tiny herbivorous ornithopod.

Jeholosaurus means “Jehol lizard.” Jehol is the traditional name for western Liaoning and northern Hebei (incidentally, it is also the name of a group of geological formations consisting of the Yixian and Jiufotang). The species name (shangyuanensis) also relates to the discovery’s site – the Shangyuan region. 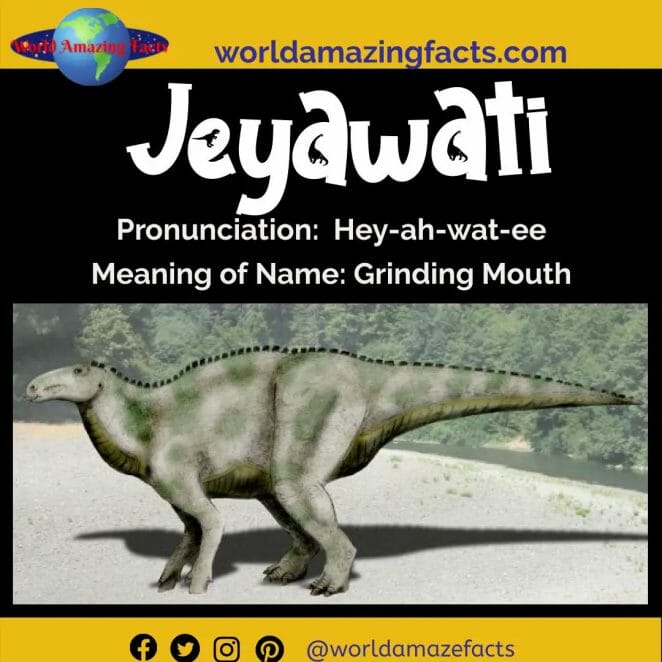 Jeyawati is a monotypic ornithopod genus in the Hadrosauroidea family. Its holotype was discovered in Late Cretaceous sediments in the state of New Mexico. It is made up of both skull and extracranial skeletal components. According to research, these fossils belonged to a single person.

The generic name Jeyawati is derived from the Zuni language, which is spoken by a tribe of North American Indians in New Mexico, and means “polished lips.” Ruga (wrinkled) and oculus (eye) are two Latin words that allude to the lateral surface surrounding the ornithopod’s ornithopods. 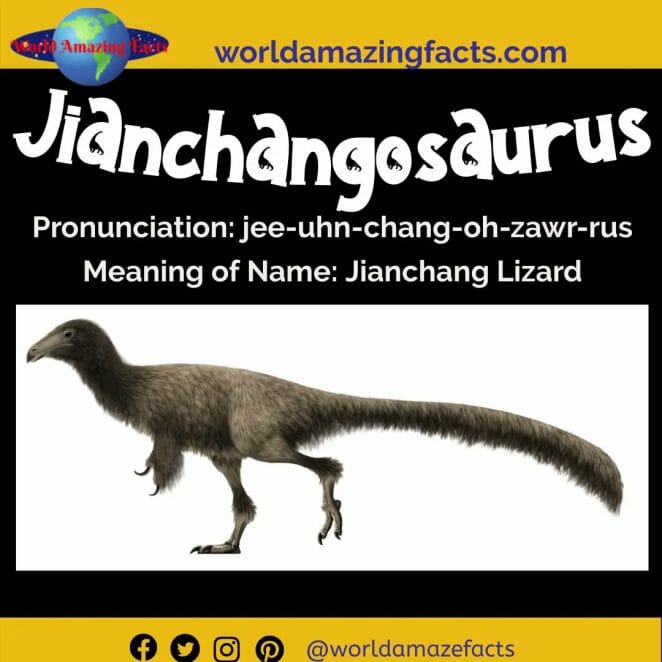 Jiangjunosaurus is a poorly understood Stegosaurus genus discovered in China’s upper Shishugou Formation and described in 2007.


Jiangshanosaurus is a sauropod genus that lived in what is now China during the late Cretaceous epoch. Tang et al. described it in 2001.

Jiangshanosaurus derives its name from the Jingshan area in the Chinese state of Zhejiang and the Greek sauros (“reptile”, “lizard”). The term “genre” is derived from the town of Lixian. 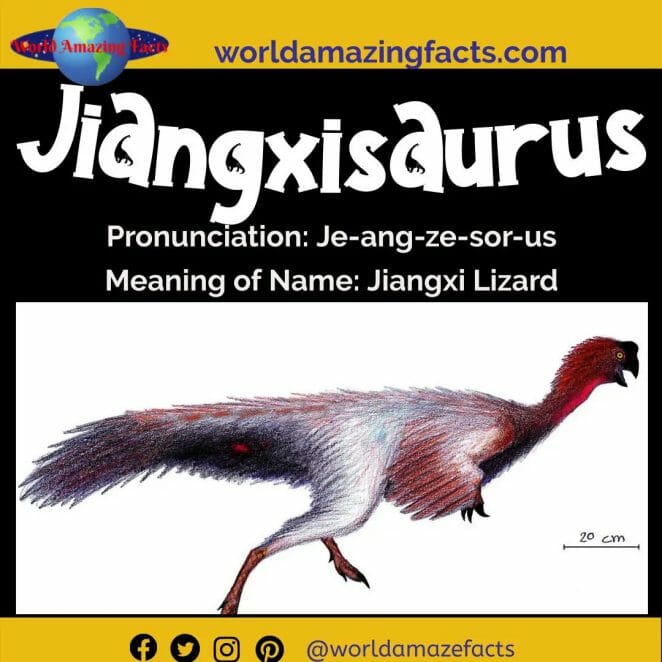 Jiangxisaurus is an oviraptorosaurus genus from China’s Late Cretaceous epoch. Jiangxisaurus was one of the Nanxiong Formation’s rare oviraptorides. A team of palaeontologists led by Wei identified and described it in 2013.

Jiangxisaurus is derived from the Chinese province of Jiangxi and the Greek word sauros (“lizard”, “reptile”). The name of the genre derives from the name of the city of Ganzhou. Jianianhualong is a tiny Cretaceous trodontide found in China nowadays. Jianianhualong is known to have one but nearly complete skeleton with surviving feather traces, which is quite common among Yixian Formation theropods.

Jianianhualong is a combination of the Jianianhua company, which funded the research, and the Chinese term long, which means “dragon.” The genre name honours Fangfang Teng, who obtained the holotype for study purposes.

Jinbeisaurus is a Tyrannosauroidea clade medium-sized theropod that lived in what is now China during the late Cretaceous period. Wu Xiao-chun and his colleagues named Jinbeisaurus in 2019.

The name Jinbeisaurus is derived from the Chinese terms Jinbei (short for Shanxi Province), bei (“north”), and Latin saurus (“reptile”, “lizard”). The species name commemorates Souzhu Wang for his contributions to the advancement of palaeontology in Shanxi Province. 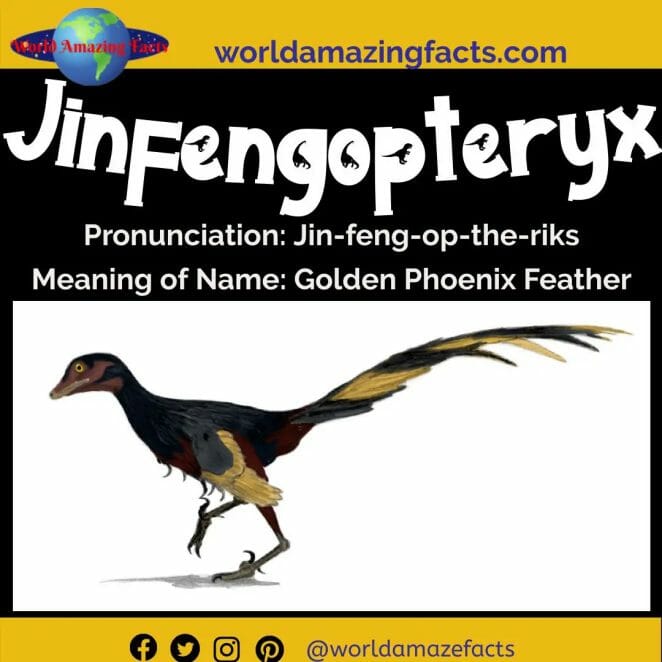 Jinfengopteryx lived during the Early Cretaceous period in what is now China. One wonderfully preserved and very complete specimen (CAGS-IG-04-0801) was discovered, with visible flight feathers on the forelimbs and massive tail feathers. 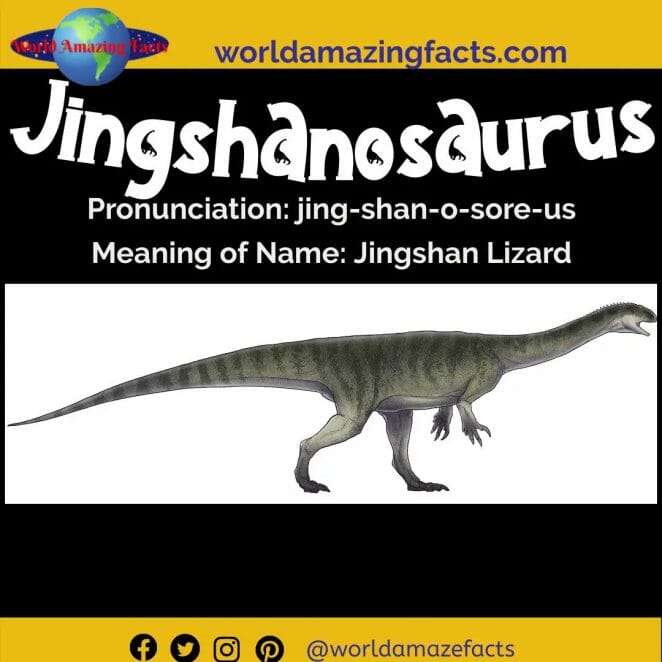 Jingshanosaurus is a huge prosauropoda that lived in what is now China around 190 million years ago.

Jingshanosaurus was named for the location where this dinosaur was discovered and means “Jingshan lizard.” Zhang and Yang named it in 1994. 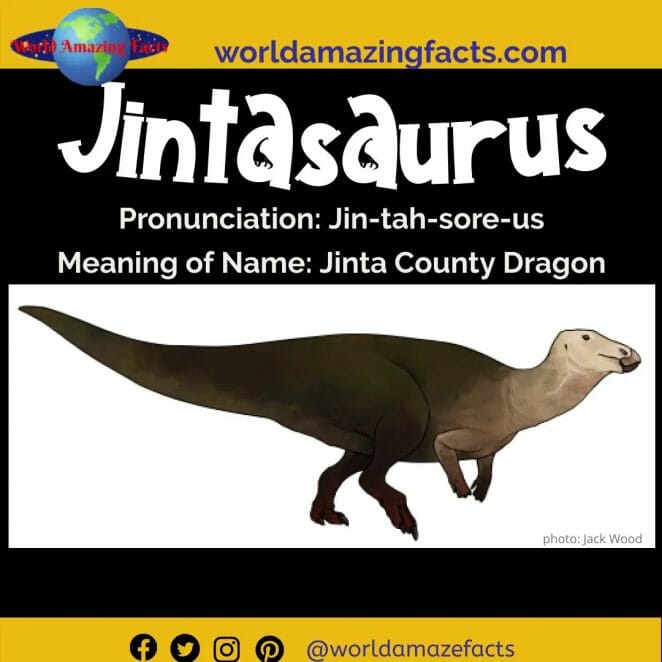 Jintasaurus was a herbivorous dinosaur from the Hadrosauriformes group that lived at the end of the Early Cretaceous period in what is now China’s Gansu Province. Hai-Lu You and Da-Qing Li, two Chinese palaeontologists, described it in 2009.

Jintasaurus gets its name from the area Jinta, which means “golden temple” in Chinese, and the Greek sauros (“reptile”, “lizard”). The species name is derived from Latin and means “crescent,” referring to the shape of an appendix on the dinosaur’s occipital condyle. 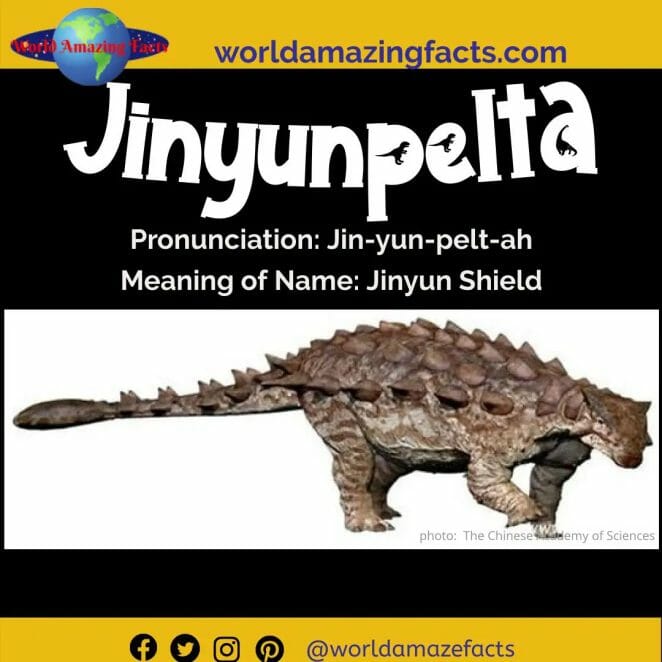 Jinyunpelt is an ankylosaurus from China’s late Cretaceous epoch. It is the oldest and most primitive representative of Ankylosaurinae, according to the authors of the description. A palaeontologist team lead by Zheng Wenjie named Jinyunpelt in 2018.

Jinyunpelt is derived from the Chinese region of Jinyun and the Latin word pelta (“shield”), which refers to the osteoderms that protect the animal’s body. 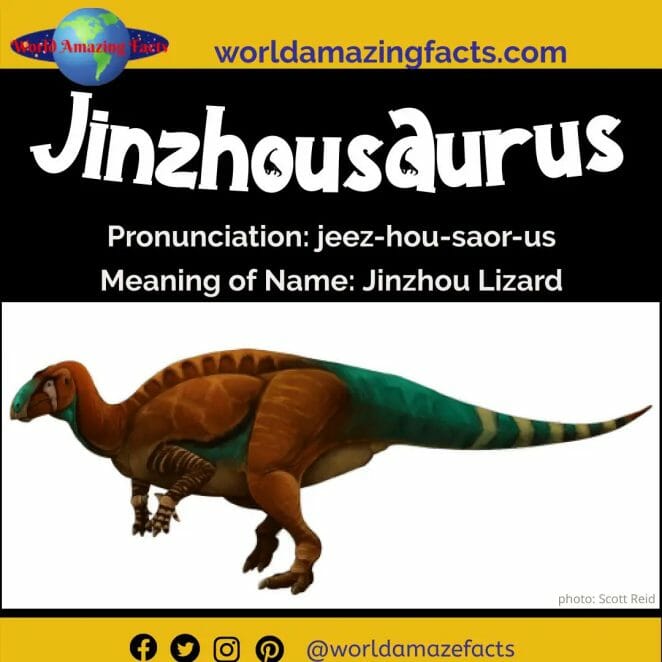 Jinzhousaurus was a medium-sized Early Cretaceous bird-pelted dinosaur that lived in modern-day China. Jinzhousaurus was discovered in the Yixian Formation near Jinzhou City (Liaoning Province). Wang Xialin and Xu Xing described the genus and the only characteristic species in 2001. Jinzhousaurus is almost always considered one of the Hadrosauroidea’s primitive representatives.

The generic name Jinzhousaurus means “Jinzhou lizard,” after the place where its holotype was discovered. The genre epithet yang, in turn, honours the eminent Chinese palaeontologist Yang Zhongjian, known as the “Father of Chinese Palaeontologists.” 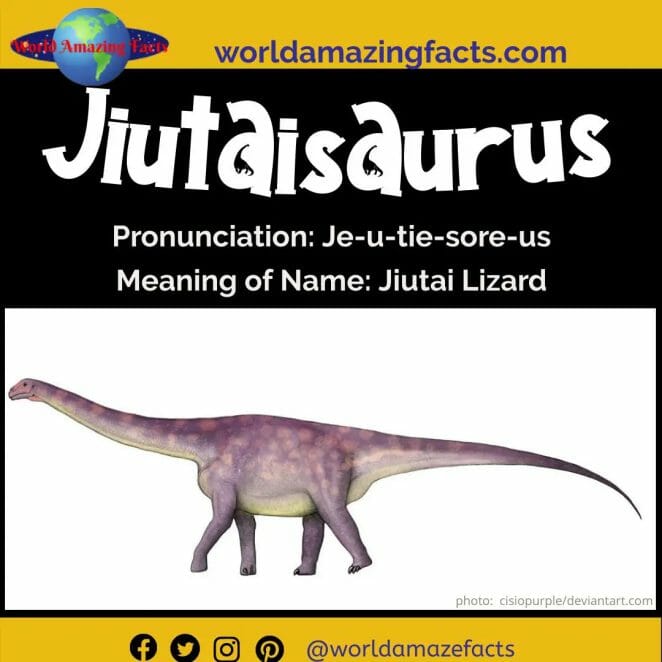 Jiutaisaurus was a sauropod discovered in Northeast China in 2006. Jiutaisaurus lived in these regions during the Early Cretaceous period. It was known and characterised using 18 caudal vertebrae.

Jiutaisaurus is a generic name that meaning “Jiutai lizard” and alludes to Jiutai, the county and city where his fossils were discovered. The species name (xidiensis) also refers to the location of the discovery, the village of Xidi, which is home to the Quantou Formation, from where it evolved. 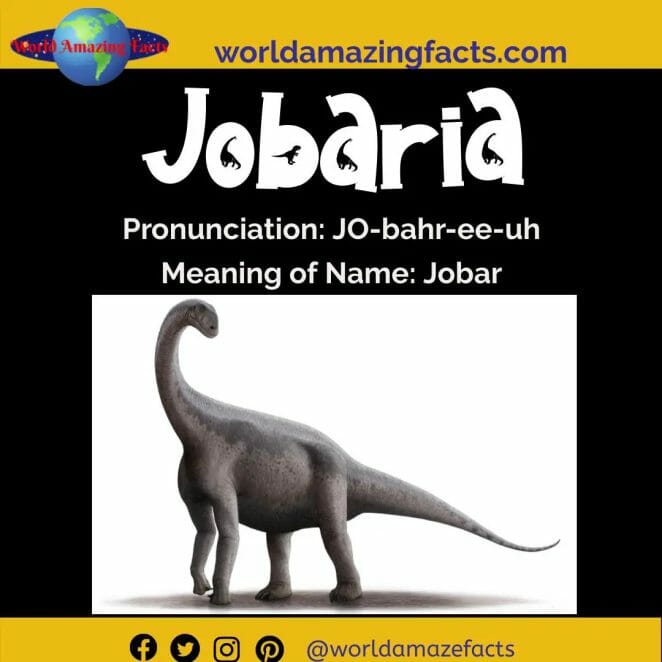 Jobaria was a long-necked dinosaur that lived in modern-day Africa. Despite the discovery of a nearly complete skeleton, palaeontologists are unsure of its exact connection within the Sauropoda group or even the age of the rock layers in which its bones were discovered. 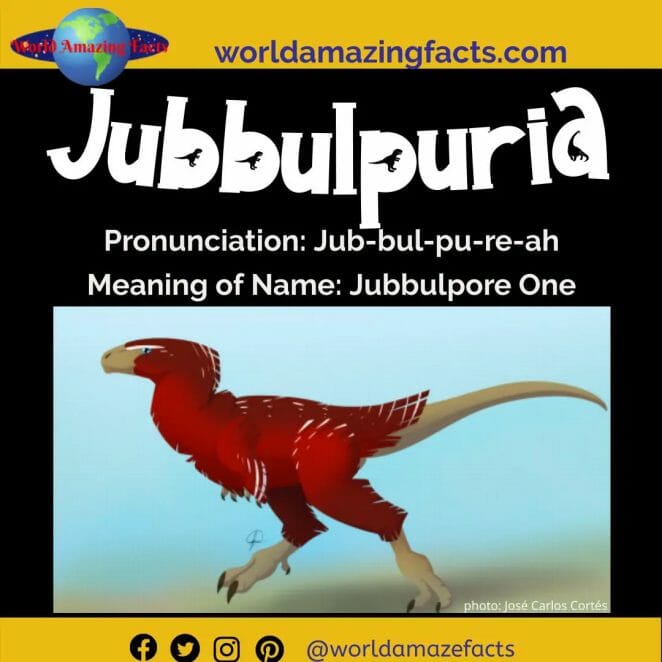 Jubbulpuria is a poorly understood and fairly small theropod, presumably a noazauride, reported on the basis of three caudal vertebrae: GSI K20 / 612, K27 / 614, and K27 / 599. Most commonly regarded as nomen dubium.

The generic name Jubbulpuria refers to the Indian city of Jabalpur, near which the fossils were discovered. Huene and Charles Alfred Matley described Jubbulpuria tenuis in 1933. The particular name means “slender” in Latin. 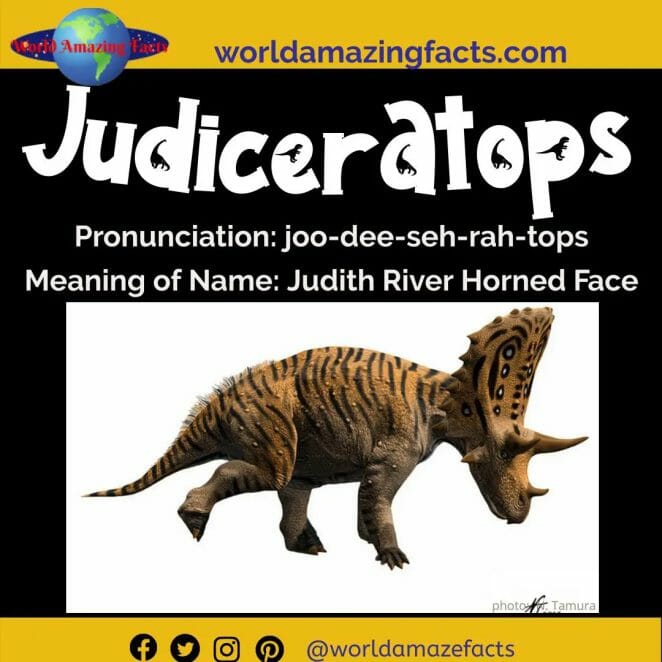 Judiceratops was a type of ceratops that existed in Montana around 78 million years ago during the Late Cretaceous period. It was the most primitive and oldest known Chasmosaurinae representative. Fossils have been discovered in the Judith River Formation strata of Hill County. Nicholas R. Longrich described Judiceratops in 2013. It was distinguished by oval-shaped transverse horns.

The Judith River Formation and the combined term ” ceratops ” inspired the name Judiceratops. The term “tigris” was inspired by Princeton University’s mascot. This name was chosen to honour the university’s commitment to palaeontology. 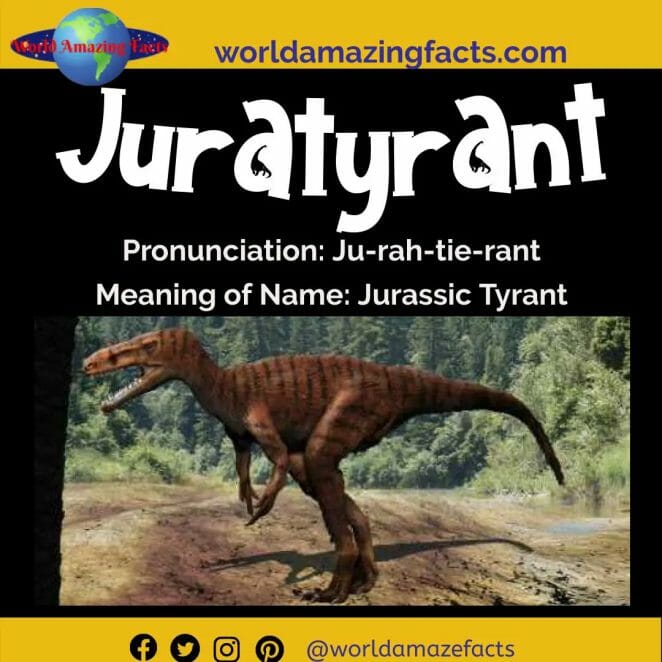 Juratyrant is a type of tyrannosauroid that existed in what is now Britain during the Late Jurassic period.

Jura alludes to the taxon’s Jurassic age, while tyrant is an Anglicized version of the Greek tyrannos and Latin tyrannus, which corresponds to the vernacular term for tyrannosauroids, “tyrannosaurs” (which is based on the etymology of Tyrannosaurus rex ). The species name honours Bridport’s discoverer, Peter Langham. 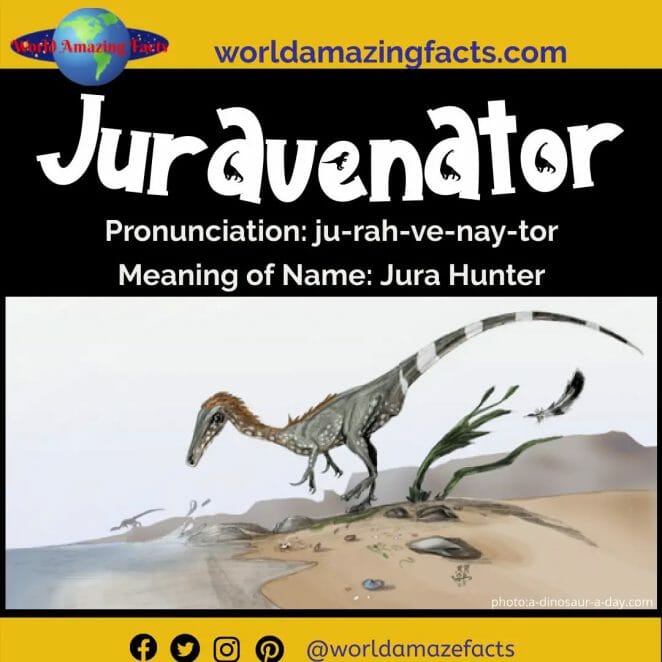 Juravenator was a tiny celurosaurus, most likely of the Compsognathidae family, that lived in what is now Germany during the Late Jurassic period.

Juraver derives its generic name from the Bavarian Jura Mountains and the Latin word venator, which means “hunter.” The species name is a tribute to the Stark family, who own the quarry where the typical and so far only example of this theropod has been discovered.