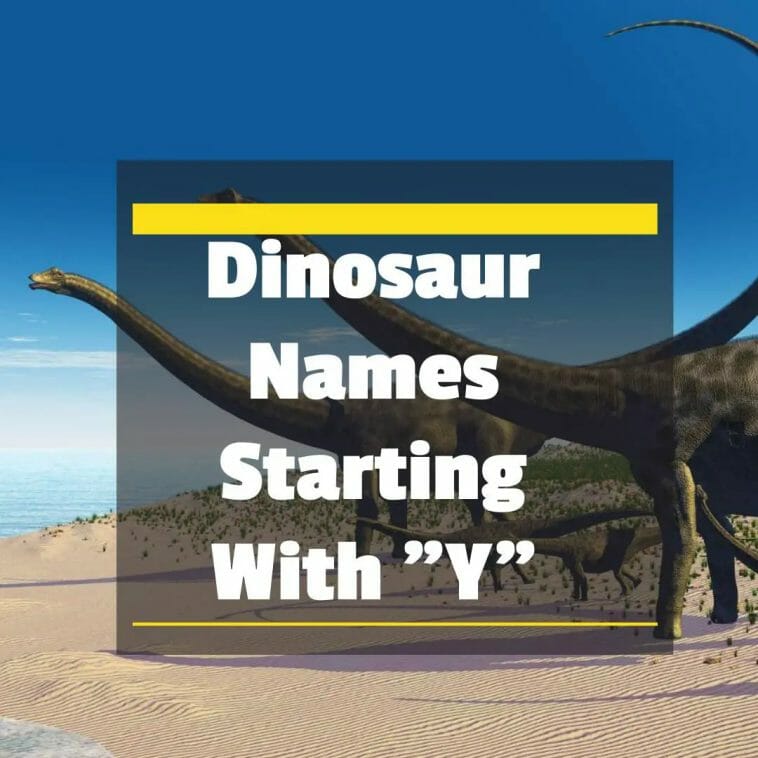 Check out the alphabetical list of dinosaur names beginning with the letter “Y”. We’ll look at dinosaur pictures and discuss what their names mean, as well as learn more about dinosaur facts.

Dinosaurs with names that begin with the letter “Y”

Contents for Dinosaur Names that Start with “Y” 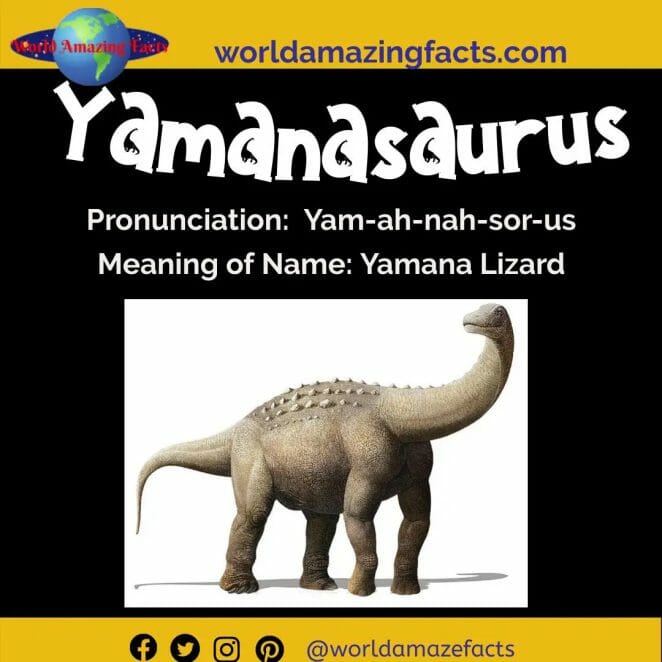 Yamanasaurus is a genus of titanosaur sauropods that existed in what is now Ecuador during the Late Cretaceous period.

Yamanasaurus derives its name from the Yamana area of southern Ecuador and the Greek word sauros, which means “reptile” or “lizard.” The species name relates to the province of Loja, where the dinosaur’s remains were discovered. 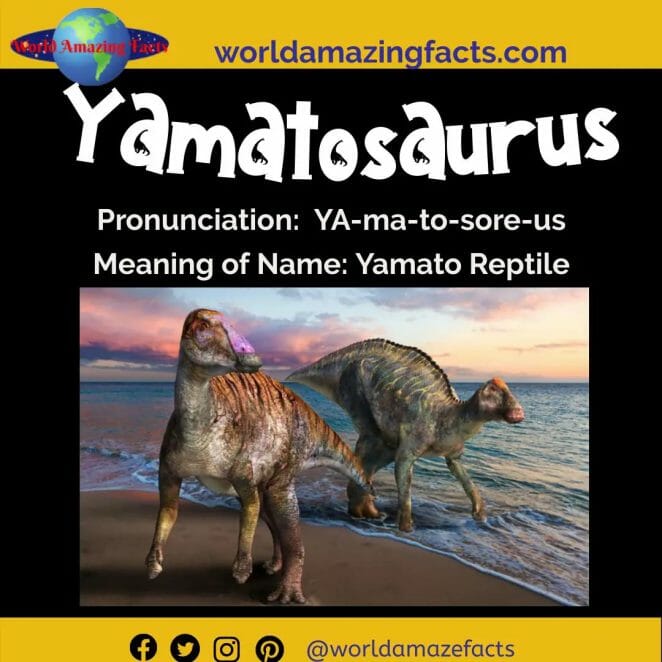 Yamatosaurus is a herbivorous dinosaur from the Hadrosauridae group that lived in modern-day Japan during the late Cretaceous epoch.

Yamatosaurus derives its name from Yamato, an old name for the Japanese archipelago, and the Greek saurus (“reptile”, “lizard”). The genre epithet izanagi alludes to a Japanese mythological deity. 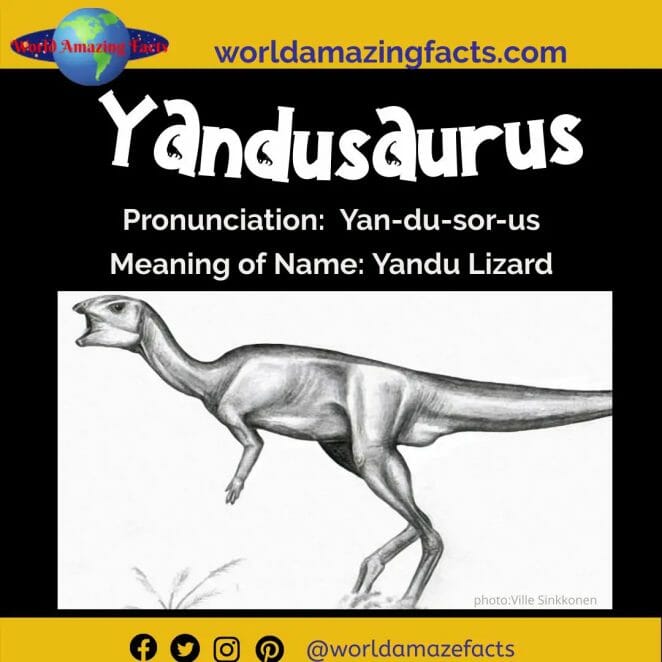 Yandusaurus was a tiny herbivorous dinosaur that lived in what is now China during the Middle Jurassic period.

Yandusaurus derives its name from Yandu, the former name for the city of Zigong. It signifies “salt capital,” as a considerable amount of salt was originally extracted in this region. In Greek, the second component of the name, sauros, meaning “reptile” or “lizard.” 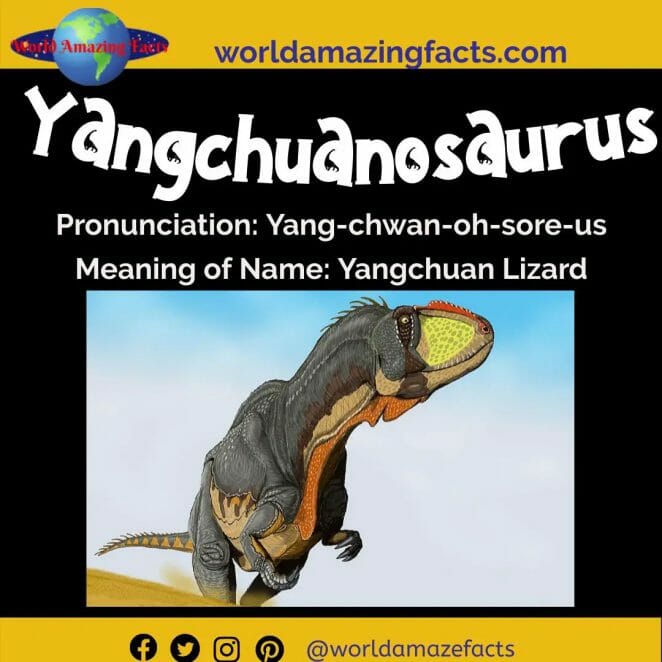 Yangchuanosaurus was a massive predatory dinosaur that lived in central China. Although it was smaller than certain later theropods like Tyrannosaurus, Giganotosaurus, and Spinosaurus, it was nonetheless one of the Jurassic’s largest terrestrial predators.

Yangchuanosaurus is derived from the Chinese Yangchuan district and the Latin saurus (“lizard”). The generic name translates as “Yangchuan lizard.” The genre designation shangyouensis also relates to a region, but the writers do not specify which one (Dong et al., 1978). The second species name, on the other hand, is derived from the city of Zigong, near which the remains were discovered (Gao, 1998). 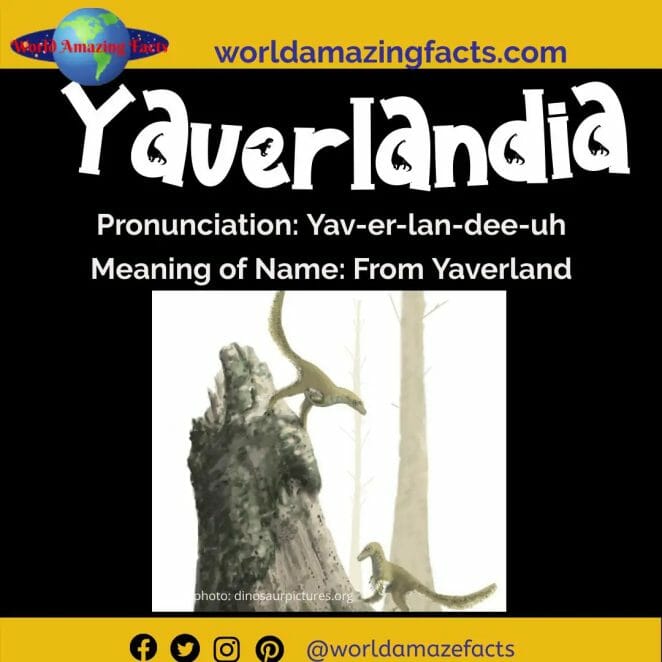 Yaverlandia was a tiny theropod, possibly of the Troodontid family, that lived in what is now Great Britain during the early Cretaceous period.

The generic name is derived from the location of the remnants, Yaverland Battery on White Island. The term bitholos derives from the Latin words bi (“two”) and tholus (“dome”), and refers to the reported double dome at the top of the skull. 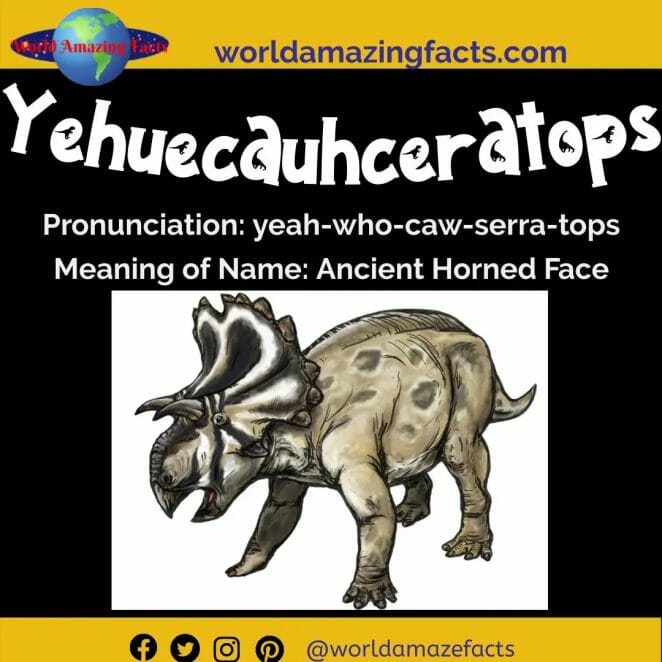 The name Yehuecuhceratops is derived from the Aztec word yehuecauh, which means “old,” as well as the usual ceratops for this group of dinosaurs, “horned face.” The genre name mudea is an abbreviation for Museo del Desierto, the name of the museum in Mexico that houses the dinosaur’s bones. 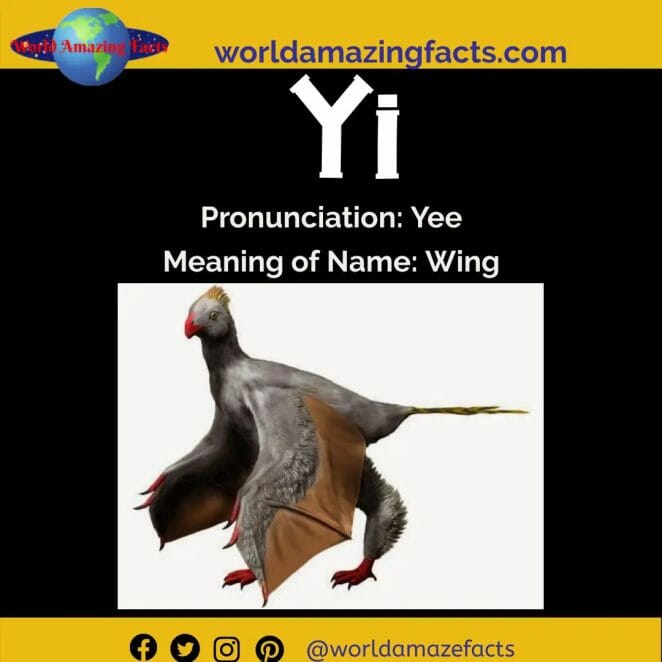 Yi qi is a small type of arboreal dinosaur with bat-like wings that lived in today’s China about 159 million years ago. Yi gets its name from the Mandarin language and is the shortest of the dinosaurs. It refers to its peculiar construction and meaning “strange wing.” 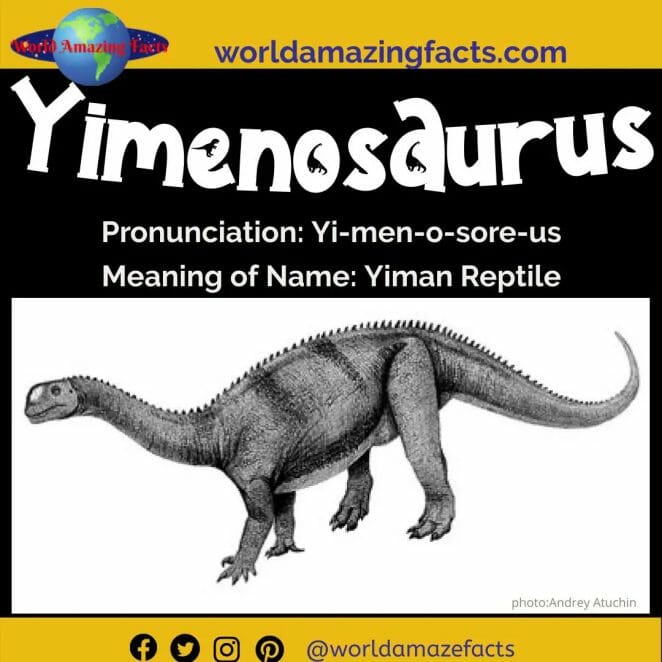 Yimenosaurus is a single-genus sauropodomorph that lived in China during the early Jurassic period. It was most likely a calm sociable herbivore like its better famous cousin Plateosaurus. 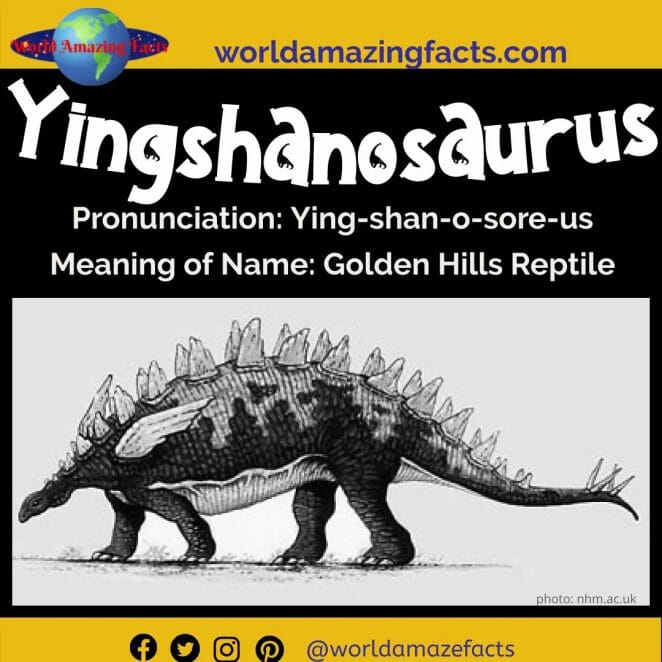 Yingshanosaurus was a stegosaurian dinosaur that lived approximately 155 million years ago during the Late Jurassic Period. It lived in China and, like other Stegosaurians, was a herbivore.

This dinosaur was given a name in a Japanese dinosaur book, although it has not yet been completely detailed (it is a nomen nudum). Zhou Shiwu coined the term Yingshanosaurus, whose meaning is “Golden Hill reptile.” 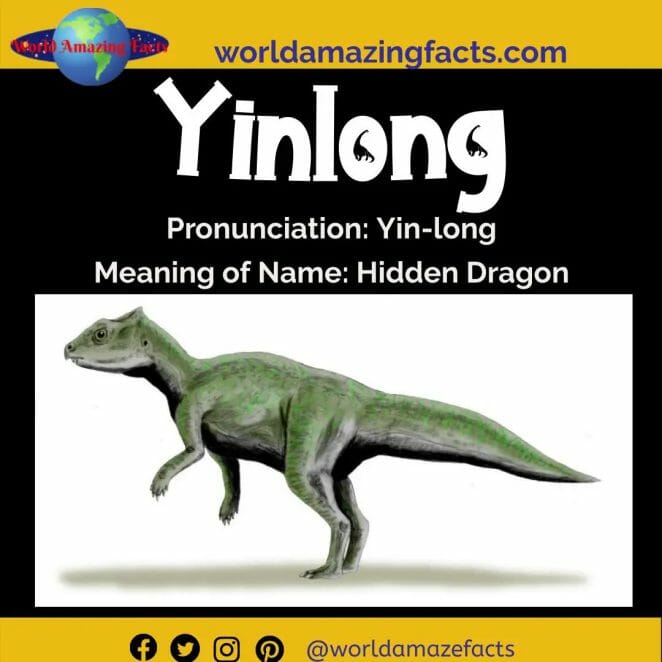 Yinlong is one of the oldest known Ceratops, living in what is now China during the Late Jurassic period.

The generic name jinlonga is derived from the Mandarin words “hidden (yin) dragon (long)” and is a reference to the film “Crouching Tiger, Hidden Dragon,” some scenes of which were shot at the site where the holotype of this Ceratops was discovered in 2004. The genre name (downsi) honours the late Will Downs, who participated in numerous paleontological excursions to Asia. 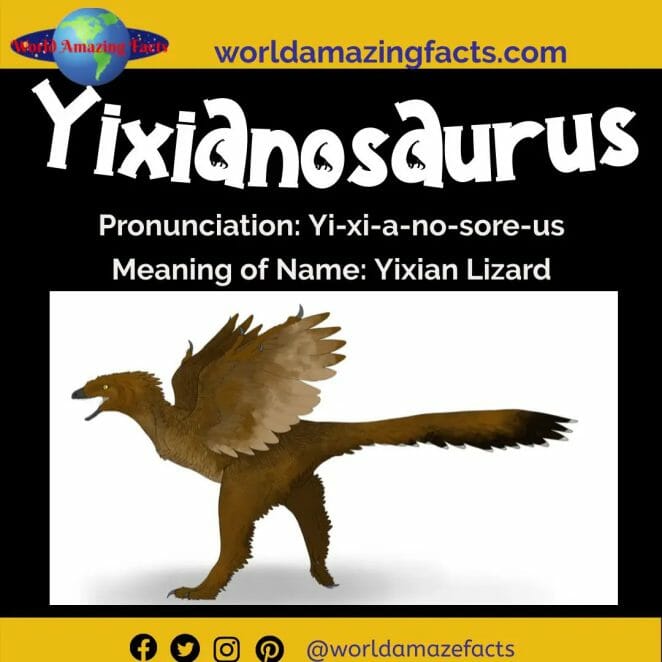 Yixianosaurus is a tiny theropod genus from the Early Cretaceous period of China. Yixianosaurus was named and described in 2003 by Xu Xing and Wang Xiao-Lin, two Chinese palaeontologists.

The name Yixianosaurus comes from the Yixian Formation, where the animal’s remains were discovered. The term “long-armed” is derived from the Latin terms long (“long”) and manus (“hand”). It refers to the Yixianosaurus’s extended hands. 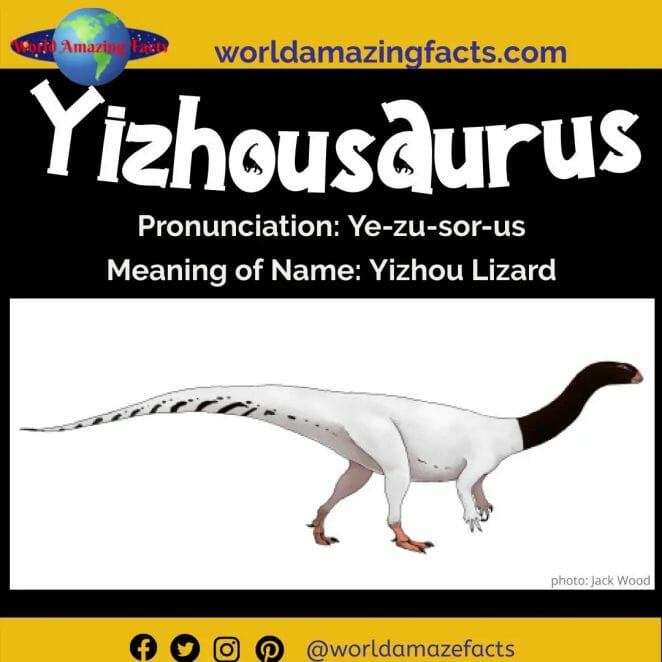 Yizhousaurus sunae is a sauropod-like dinosaur from the early Jurassic period. It was discovered in Yunnan Province, China, near the town of Duwafang.

Yizhousaurus is named for the Autonomous Prefecture of Chuxiong Yi, where it was discovered, and Professor Sun Ai-Ling, who has made significant contributions to the study of fossilised vertebrates from China, especially those from Lufeng. 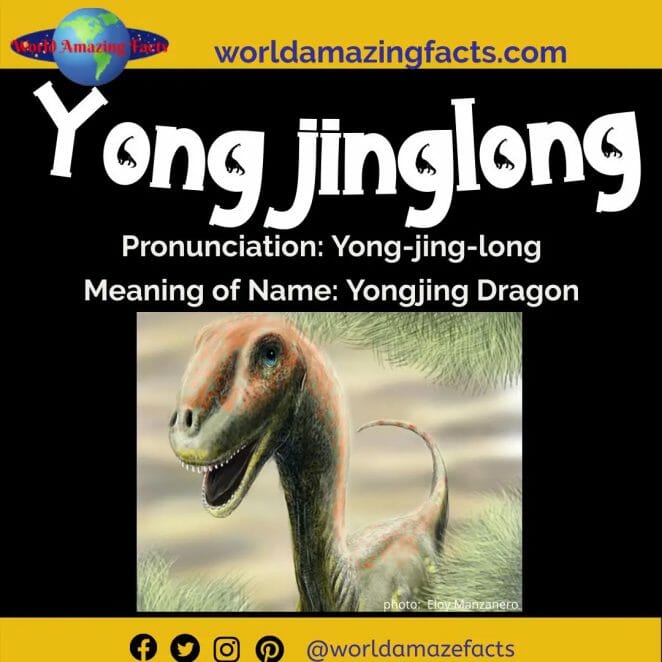 Yongjinglong is a kind of sophisticated titanosaur that lived in China during the Early Cretaceous period. A Chinese-American palaeontology team described Yongjinglong in 2014.

The generic name is made up of two parts: “Yongjing” refers to the Yongjing County, which is near the site where the Jongjinglong fossils were discovered, and “long” means “dragon” in Chinese.
The species name “datangi” honours palaeontologist Zhi-Lu Tang of the Beijing Institute of Vertebrate Paleontology and Paleoanthropology for his contributions to dinosaur study during the Tang Dynasty. The name is translated as “Yongjing Tango Dragon.” 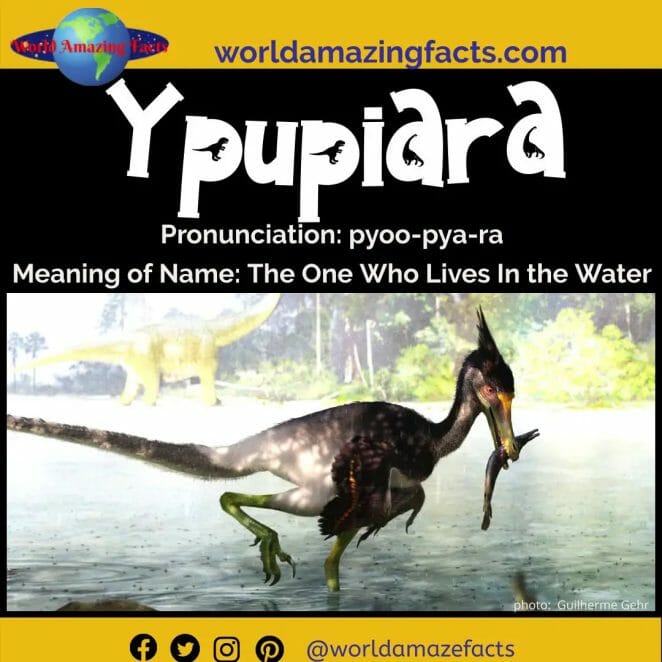 Ypupiara is a genus of a tiny theropod of the Dromaeosauridae family that lived in today’s Brazil at the end of the Cretaceous period. The animal is only known by two bones, which were burned in a fire in 2018. Arthur Brum and colleagues described Ypupiara in 2021.

Ypupiara means “one who lives in the water.” This is a reference to the mythology of a water monster in Brazil. The name also alludes to the dinosaur’s reported fish diet. Alberto Lop, a palaeontologist from Brazil, is honoured by the genre name. 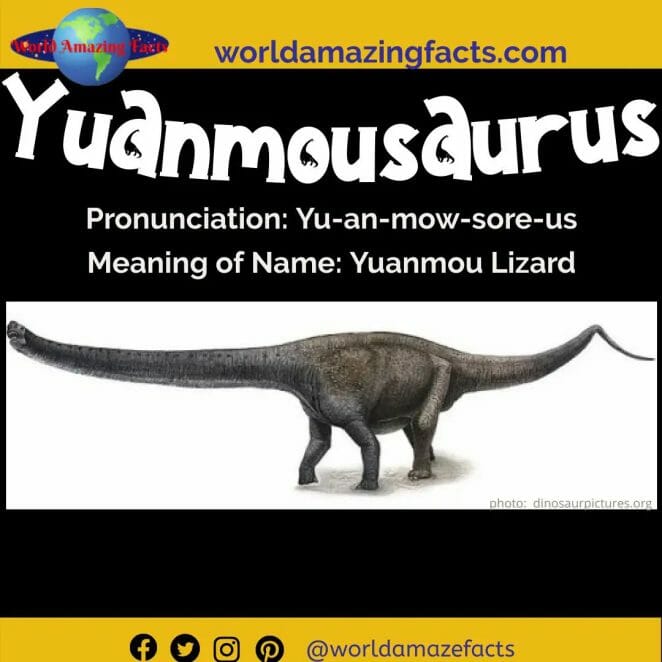 Yuanmousaurus was a monotypic sauropod that existed in what is now southern China during the Middle Jurassic period. Juanmouzaur coexisted with sauropodomorphs like Nebulasaurus and Eomamenchisaurus mamenchisaurides.