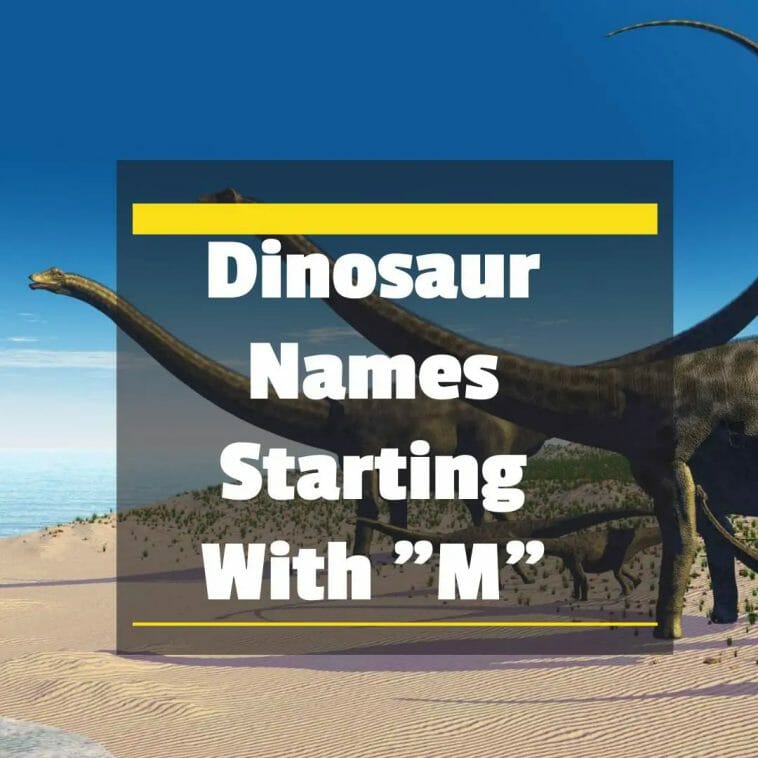 Check out the alphabetical list of dinosaur names beginning with the letter “M”. We’ll look at dinosaur pictures and discuss what their names mean, as well as learn more about dinosaur facts.

Dinosaurs with names that begin with the letter “M”

Contents for Dinosaur Names that Start with “M” 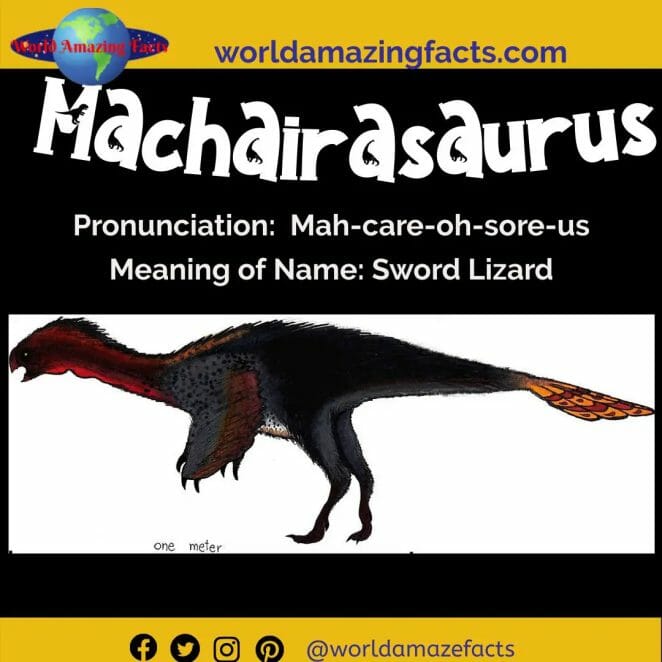 Machairasaurus is an oviraptorosaurus genus from China’s late Cretaceous epoch.

The name Machairasaurus is derived from the Greek words machaira (meaning a sword with an s-shaped curving blade) and sauros (meaning claws) (“lizard”, “reptile”). The term “slender” comes from the Greek terms leptos and onychos (“claw”). 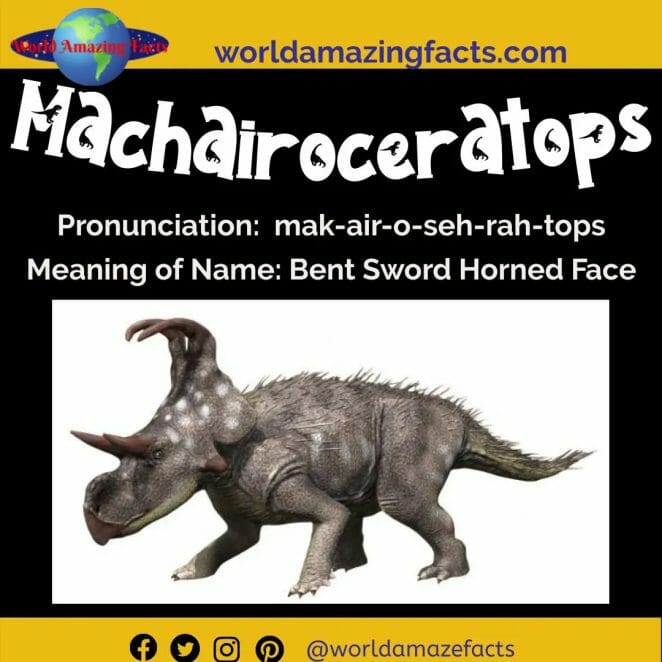 Machairoceratops is a kind of ceratops from the Late Cretaceous Centrosaurinae group.

Machairoceratops derives its name from the Greek term machairis, which means “curved sword,” and alludes to the forward-curved epiparietales position 1 – the cones on the back of the ruff, and the Latin word ceratops, which means “horned face.” The species name cronusi is derived from the Greek god Kronos, who is sometimes represented with a bent sword. 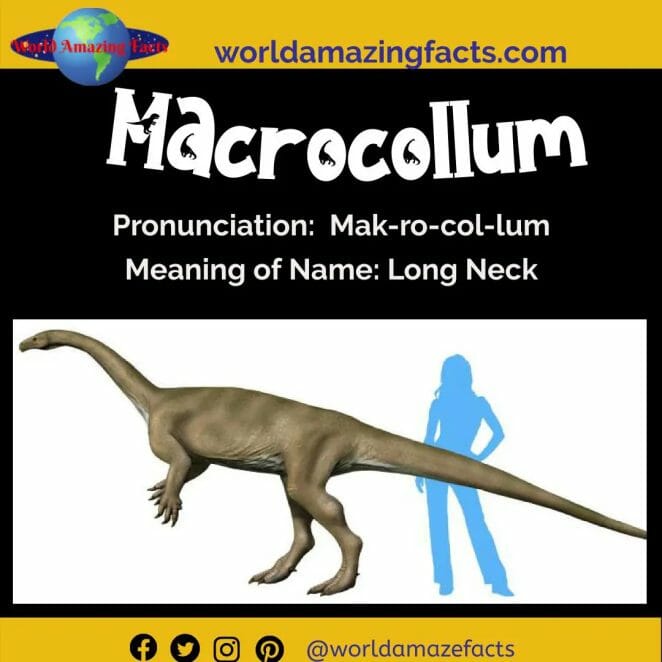 Macrocollum is a prehistoric sauropodomorph genus from the Unaysauridae family that lived in what is now Brazil during the Late Triassic epoch.

Macrocollum is derived from the Greek words makrós (“long”) and collum (“neck”), and refers to the animal’s enlarged neck. Jose Jerundino Machado Itaqui, one of the founders of the Centro de Apoio a’ Pesquisa Paleontologica da Quarta Colonia (CAPPA / UFSM), is honoured by the genre name. 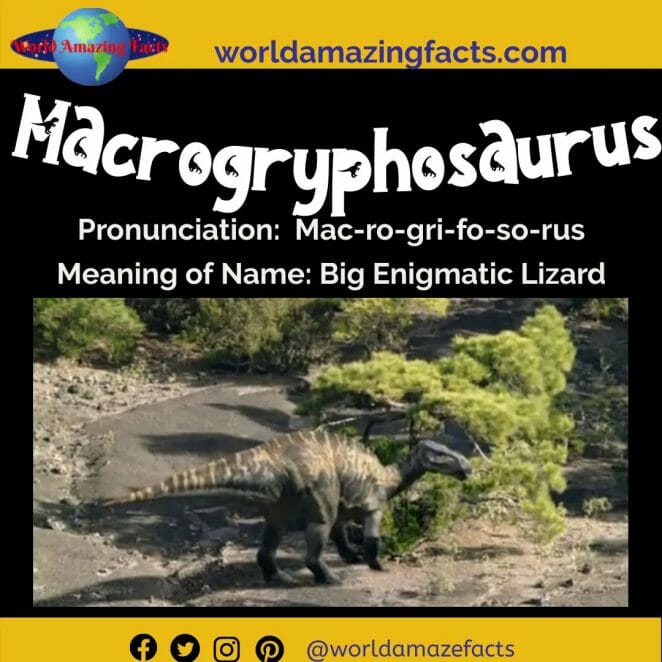 Macrogryphosaurus is a type of ornithopod whose fossils were discovered 60 kilometres northwest of Neuquén, Argentina.

Its generic name is derived from the Greek words macro (big), grypho (mystery), and sauros (lizard). The entire meaning of the term macrogriphosaurus, as well as its genre epithet, is “big enigmatic lizard.” 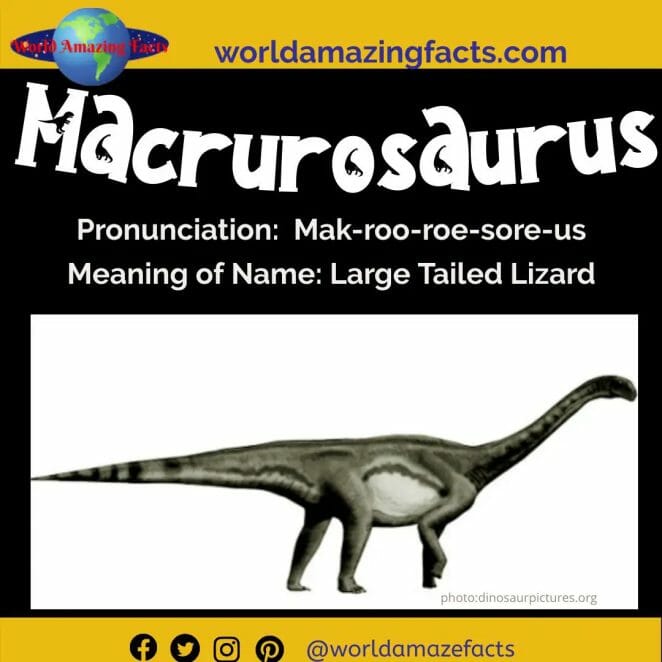 Macrurosaurus was a long-necked dinosaur that lived in what is now England during the late Cretaceous period. 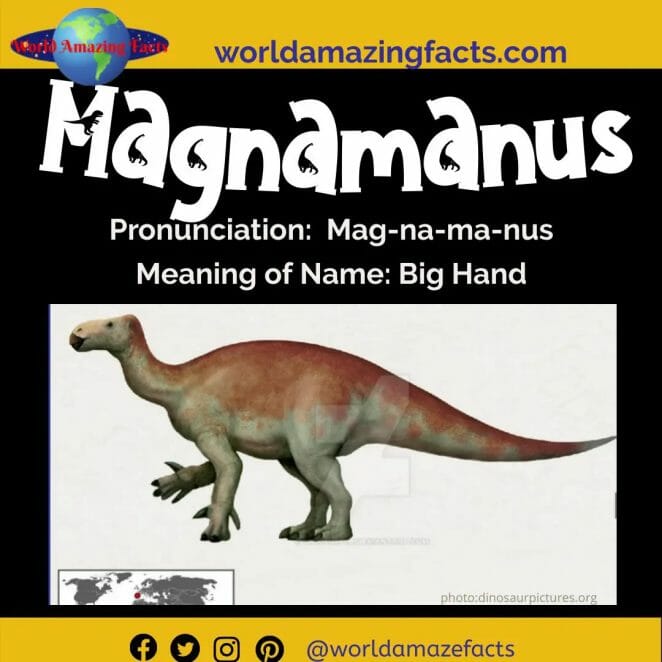 Magnamanus is an ornithopod from the Iguanodontia group that lived in what is now Spain during the early Cretaceous period. Magnamanus soriaensis is the only species that has been described. With its general body structure and size, this dinosaur resembled its more famous relative, the iguanodon.

The generic name derives from Latin and means “large hand.” The genre name alludes to the Spanish province of Soria. 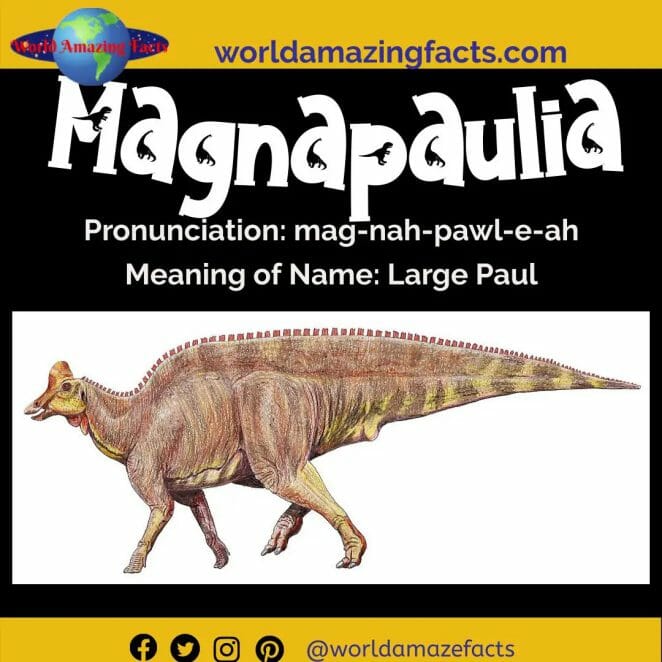 Magnapaulia is a massive lambeosaurin from the late Cretaceous period of Mexico. Magnapaulia lived here 74.7 million years ago. It is one of the largest ornithopods known. It featured abnormally lengthy appendages, notably on the caudal vertebrae, as well as chevrons.

Magnapaulia is a combination of two words: Latin magna (big) and paulia, which recognises a man named Paul Haaga for his enormous support for the Los Angeles Museum of Natural History and its Dinosaur Institute’s scientific study and public programming. 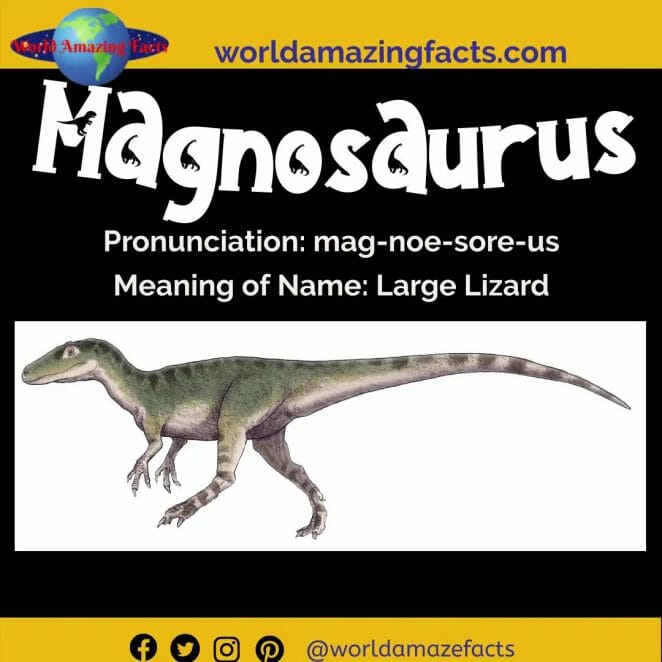 Magnosaurus was a tetanura that lived in the Middle Jurassic period of England. The name Magnosaurus was given because of its resemblance to Megalosaurus, which was previously thought to be the dinosaur in question. 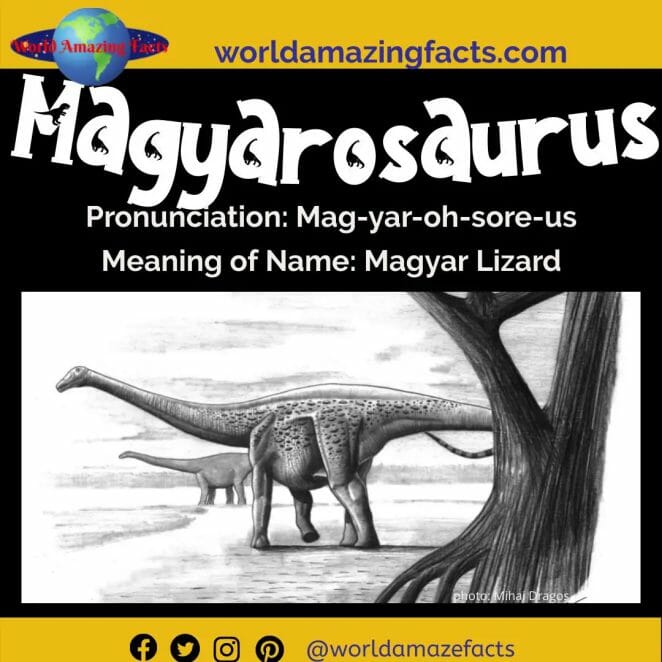 Magyarosaurus is a small sauropod with fossilised bones discovered in what is now Romania. It lived near the conclusion of the dinosaur epoch in various parts of Europe. There are three species known, one of which is usually regarded important by modern palaeontologists.

Magyarosaurus is a genus name that meaning “Magyar lizard” and so praises the Hungarians. The meaning of individual species’ epithets:
– dacus – honours the ancient Dacians who once lived in Romania.
– transsylvanicus – is derived from the historic land of Transylvania, which is located in the Transylvanian Highlands in central Romania.
– The word hungaricus is derived from the name of a nearby country to Romania, Hungary. 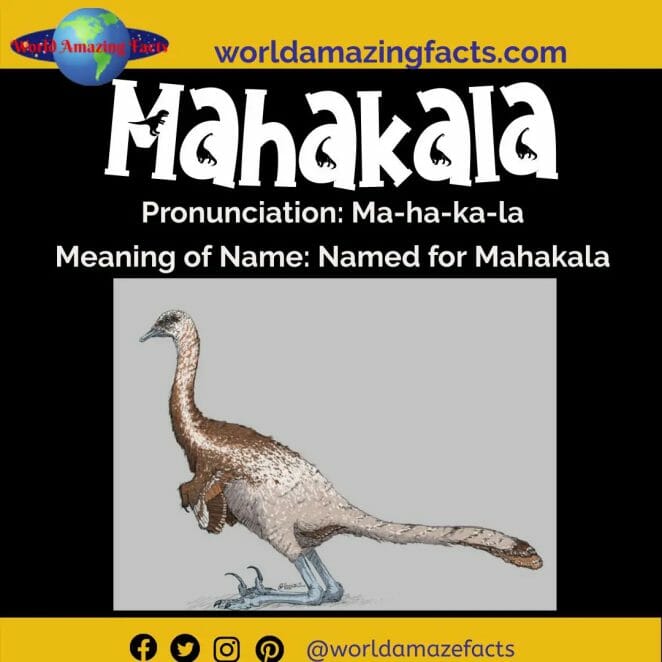 Mahakala is a dromeosaurid (Halscaraptorin) whose fossils have been discovered in Djadokhta Formation rocks ( Mongolia ).

The generic name Mahakala is derived from the name of the Tibetan Buddhist god Mahakala, who is the most powerful keeper of the Dharma (Buddhist laws) in this religion. The species name, on the other hand, relates to the South Grave Ajmak (mnögov), where the remains of this Celurosaurus were discovered. 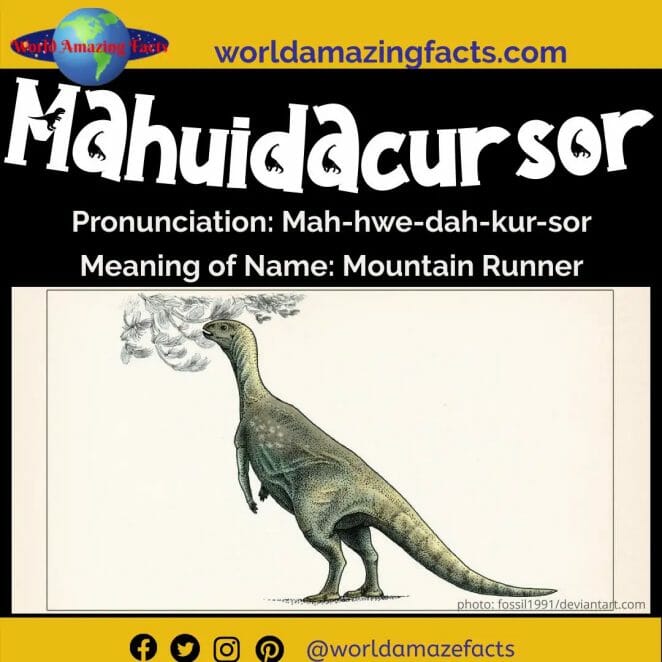 The Mahuidacursor was a medium-sized ornithopod that lived in Argentina during the late Cretaceous period. A team of palaeontologists led by Penelope Cruzado-Caballero named and described this herbivorous dinosaur in 2019.

The generic name Mahuidacursor is derived from the Mapuchean Indian word mahuida (“mountain”) and the Latin cursor (“runner”). It refers to the distinctive scenery surrounding Rincon de los Sauces, which is characterised by numerous volcanic mountains. Lipanglef comes from the Mapuche language and refers to the delicate build of Mahuidacursor, particularly in the forelimbs. 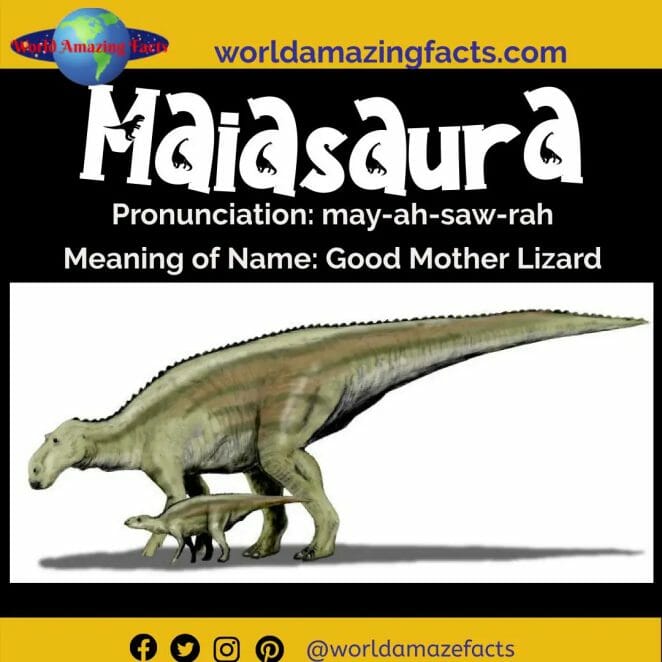 Maiasaura was a type of ornithopod that lived near the end of the Cretaceous period. It is well-known for the numerous discovered eggs and nests. Jack Horner and Robert Makela wrote the description of Maiasaura. They named the slope where they were located “Egg Mountain” because of the concentration of nests with eggs. It was a breeding colony. The first Maiasaura fossils were discovered in 1978.

Maiasaura’s name means “good mother lizard.” This dinosaur was called after the fact that it most likely provided food to its kids and defended them from predators. 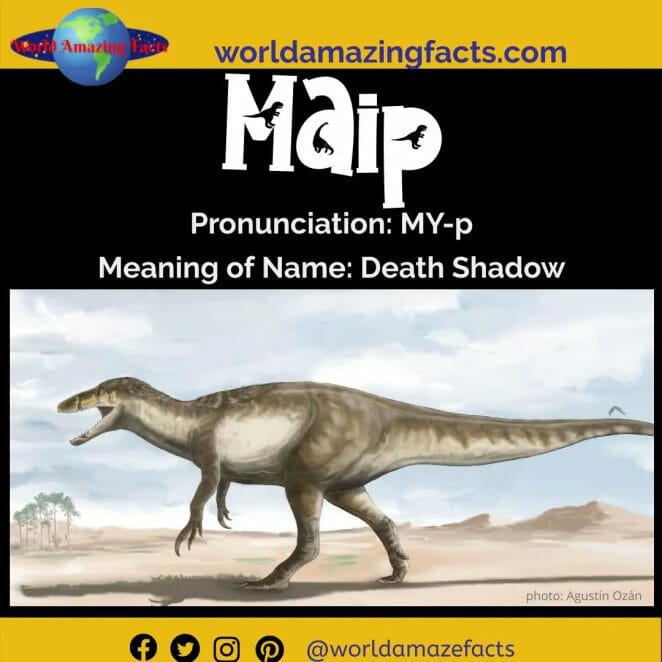 Maip is the genus name for the largest known Megaraptoridae representative that lived in Argentina during the Late Cretaceous period. It is the Maastrichtian’s most complete mega-caporide. Maip was discovered in the Chorrillo Formation on a Patagonian farm in 2019.

According to Tehuelche, the indigenous Indians, the generic term Maip denotes a terrible beast roaming the Andes. The term macrothorax is derived from the Greek word “macrós” (big) and the Latin word “thorax” (chest), and refers to the enormous thoracic cavity. 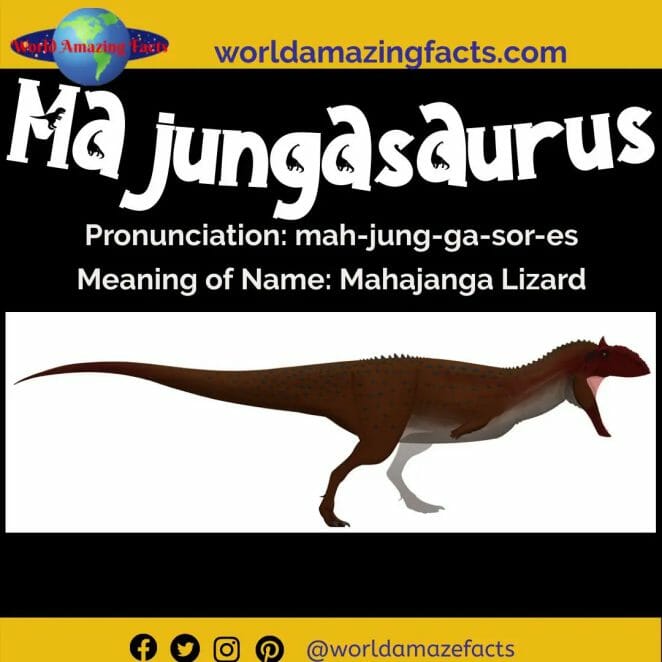 Majungasaurus is a monotypic abelisaurid theropod genus from the late Cretaceous period that lived in what is now Madagascar ( Maastrichtian , ca 72-66 Ma ). Only the Maevarano Formation strata near the town of Berivotra southeast of Mahajanga City have definitive Majungasaurus remains (northwest Madagascar , Mahajanga Basin).

This species is well-known for its plentiful bone material, which represents individuals of varying sizes (and probably of different ages). As a result, Majungasaurus is a rather well-known theropod.
The specific name is derived from the Latin word crenatus (meaning “notched”) and the suffix -issimus (meaning “most”), referring to the numerous serrations on the front and back teeth edges. 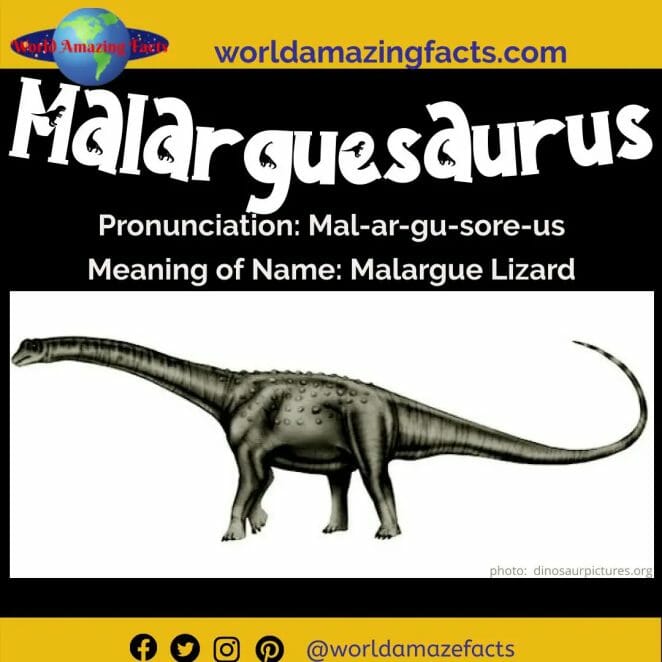 Malarguesaurus is a genus of a very big sauropod from the Titanosauria family that lived in what is now Argentina during the Late Cretaceous period. González Riga and colleagues named and characterised Malarguesaurus in 2008.

Malarguesaurus was named after the Malargue Department in Argentina’s Mendoza Province. Florencia Fernandez Favaron, who discovered the first fossil of the described dinosaur and assisted in its excavation, is honoured with the species name.

Malawisaurus is a genus of relatively tiny sauropods from the Titanosauria family that existed in what is now Malawi, Africa, during the Early Cretaceous period. Malawisaurus was one of the first members of this huge group of sauropods.

It was first classed as Gigantosaurus, then Tornieria. Malawisaurus was given its own species by Jacobs et al. in 1993. Malawisaurus is Latin for “Malawi Lizard.” 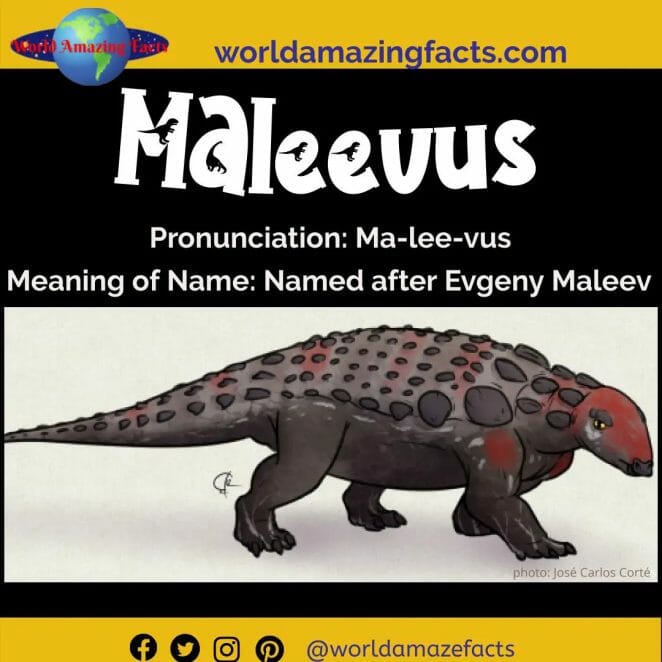 Maleevus, according to some researchers, is a dubious (nomen dubium) type of ankylosaurid, known mostly from skull fragments discovered and reported in 1952 by Russian palaeontologist Maleev, who named the find Syrmosaurus disparoserratus.

In honour of Maleev, Soviet palaeontologist Tatyana Tumanova called the fossil Maleevus in 1987. 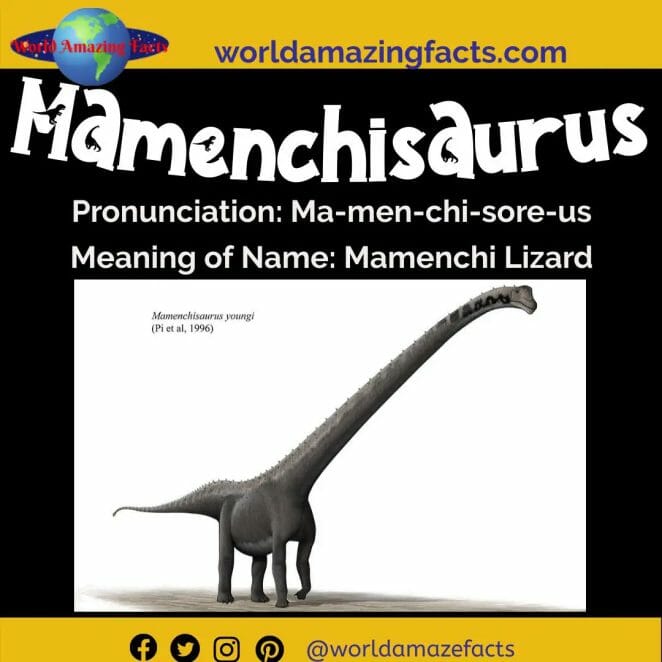 One of the most well-known sauropods is Mamenchisaurus. Its renown is certainly due to its extremely long neck, which can be up to half the length of the body. The length ranged from roughly 14 m to maybe 35 m depending on the species. Mamenchisaurus has a complicated taxonomic history, and it is possible that some of the species given to it actually belong to other genera.

Mamenchisaurus is a generic name derived from the Mǎmíngxī stream. Professor Young, the author of the typical species description, mistranslated the name of this stream from “stream of neighing horses” to “stream of horse gate.” This is why this dinosaur was given the name Mamenchisaurus, however it should be “Maminchisaurus.”