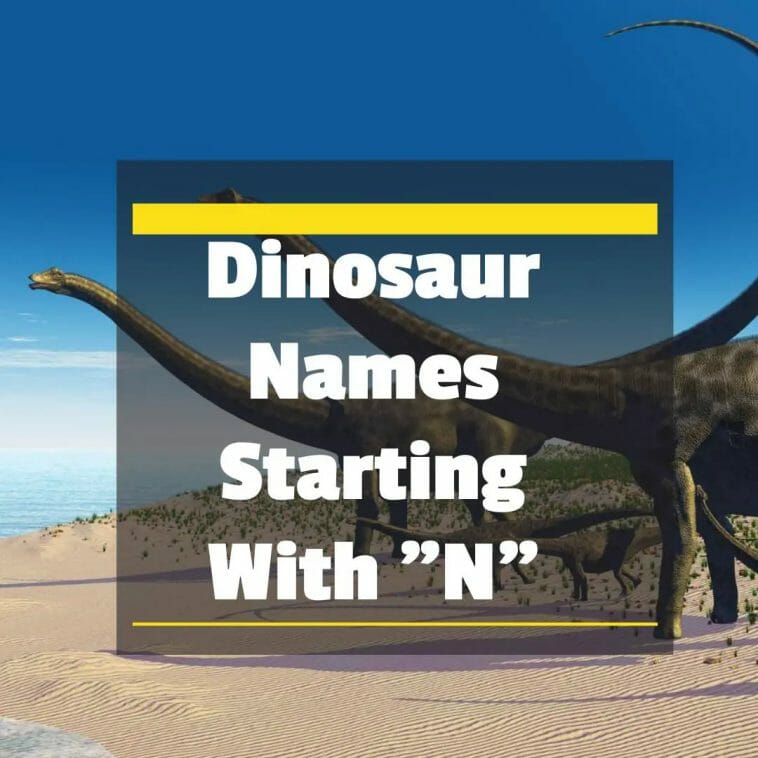 Check out the alphabetical list of dinosaur names beginning with the letter “N”. We’ll look at dinosaur pictures and discuss what their names mean, as well as learn more about dinosaur facts.

Dinosaurs with names that begin with the letter “N”

Contents for Dinosaur Names that Start with “N” 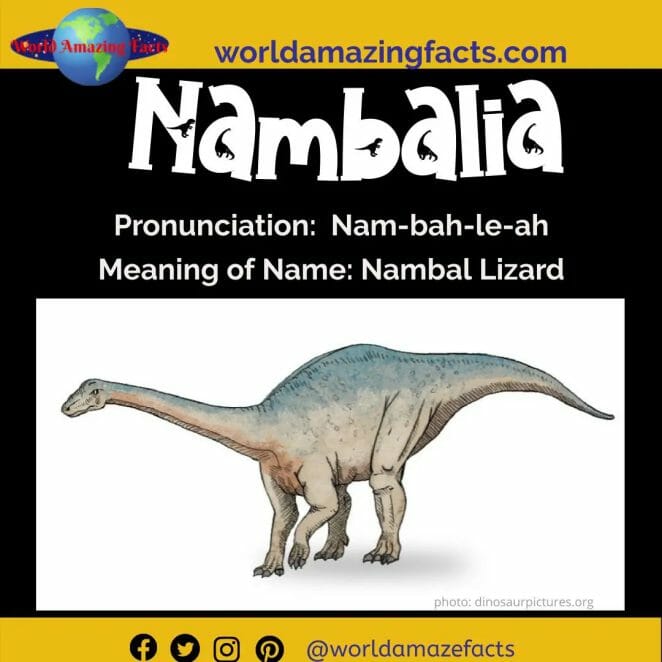 Nambalia is a sauropodomorph (Sauropodomorpha) that existed in modern-day India between 210 and 203 million years ago.

The generic name originates from Nambal, which is close to where the holotype was discovered. Dr. Roy Chowdhuri was honoured with the species name in honour of his contributions to the study of Triassic vertebrates in India. 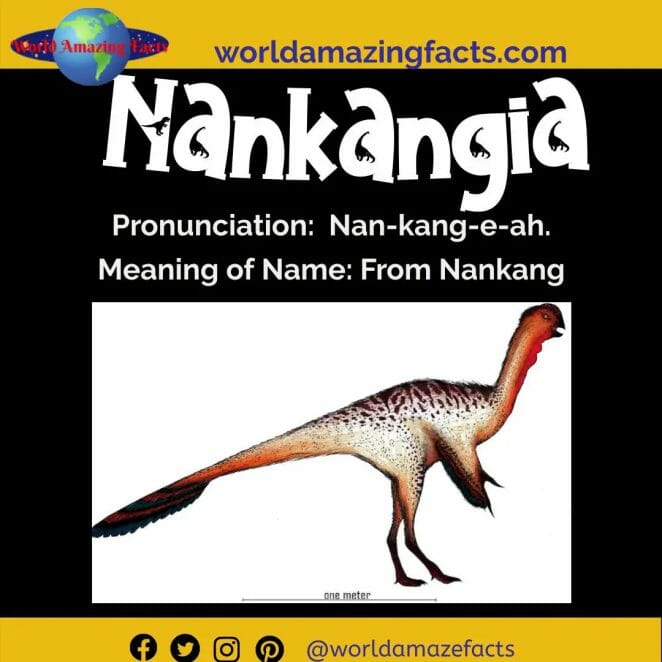 Nankangia is an oviraptorosaurus from China’s late Cretaceous epoch. Nankangia is derived from the administrative unit of Nankang City, China. Jiangxi Province is mentioned in the genre epithet. 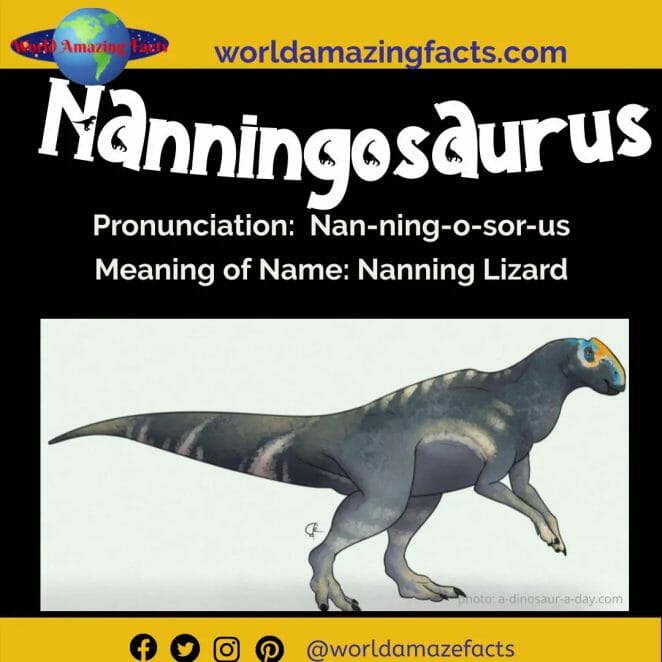 Nanningosaurus is a hadrosaurid dinosaur genus from the upper Late Cretaceous of Guangxi, China.

The generic name alludes to Nanning, which is adjacent to the excavation site. The particular name is derived from the Pinyin da-shi, which means “big stone,” and refers to the locality where the find was made. 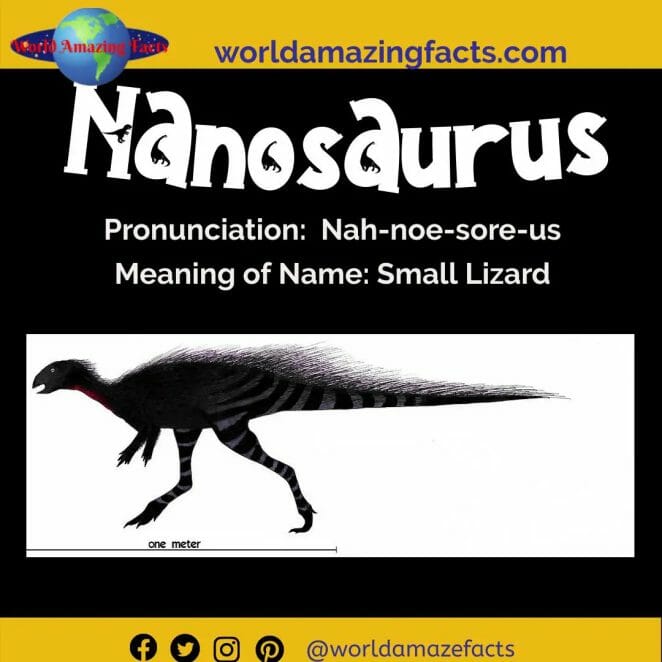 The Nanosaurus is a tiny Neornithischia that lived in North America near the end of the Jurassic period. This dinosaur’s generic name relates to its diminutive size. Nanosaurus was most likely a fast-running, agile herbivore. 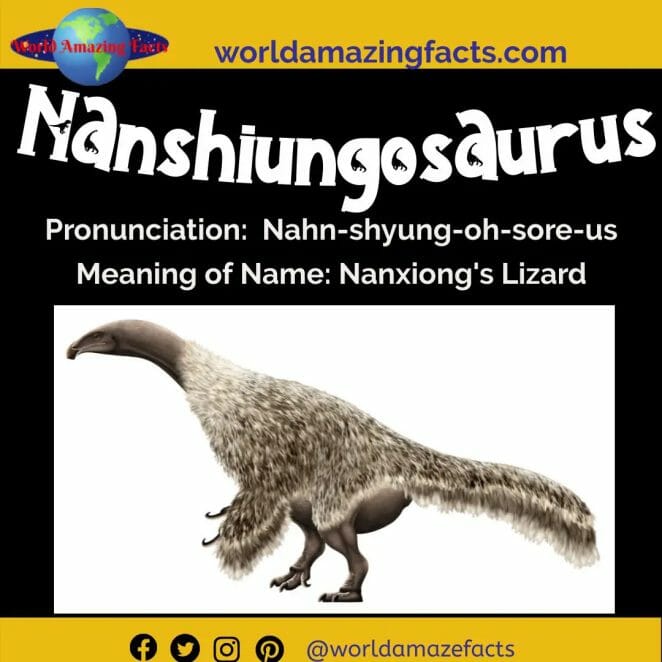 The genus name, Nanshiungosaurus, is derived from the Greek and relates to the place of origin, Nanxiong city (sauros, meaning lizard). The particular term, brevispinus, is derived from the Latin brevis and spina (meaning short and spine, respectively), in reference to the vertebral spines’ relative shortness. 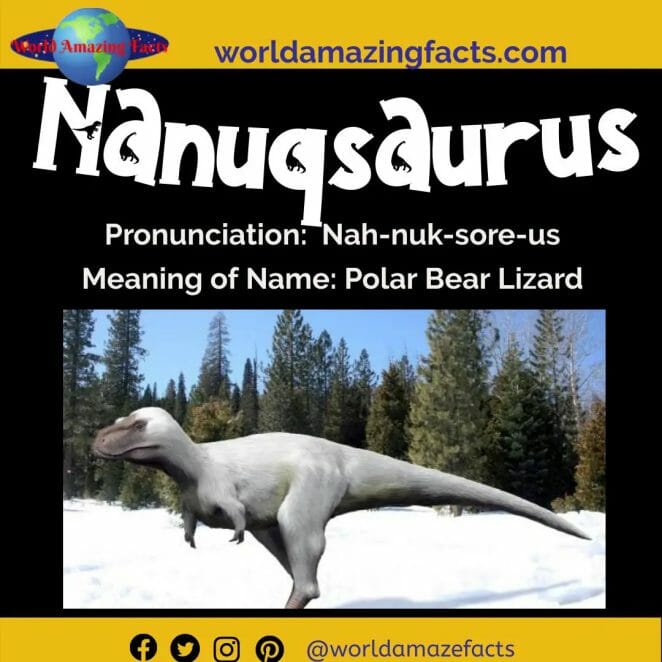 Nanuqsaurus is a carnivorous tyrannosaurid theropod from the Late Cretaceous period discovered in 2006 on Alaska’s North Slope.

The genus name Nanuqsaurus is derived from the Inuit term nanuq, which means polar bear (Ursus maritimus), and the Greek word sauros, which means “lizard.” The genre name hoglundi commemorates Forrest Hoglund’s profession in earth sciences as well as his “philanthropic endeavours to benefit cultural institutions.” 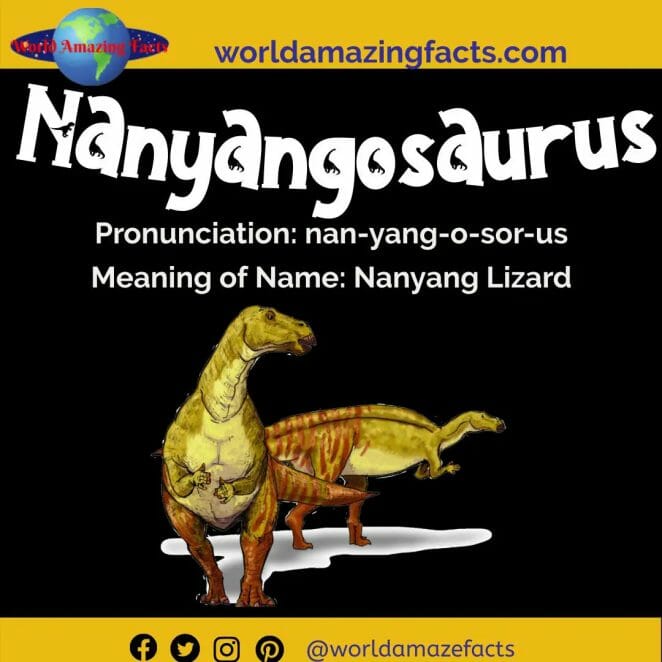 The generic name (“Nanyang lizard”) refers to the location of the specimen, which was discovered near the city of Nanyang. The genre name celebrates the great strategist and politician Zhuge Liang, who lived in Nanyang for many years. 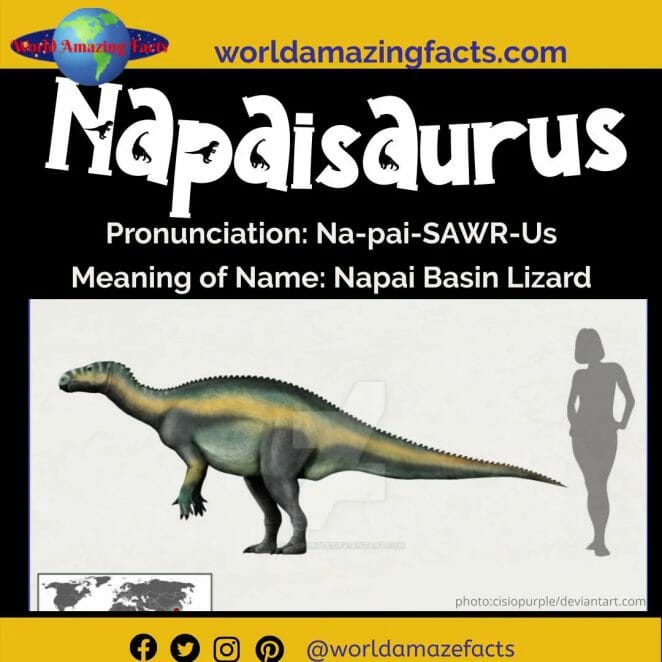 Napaisaurus was a herbivorous dinosaur that lived in what is now China during the early Cretaceous period. It is the first basic iguanodont to be discovered in southern China. Napaisaurus fossils were discovered in 2020, and Ji and Zhang named and characterised it a year later. 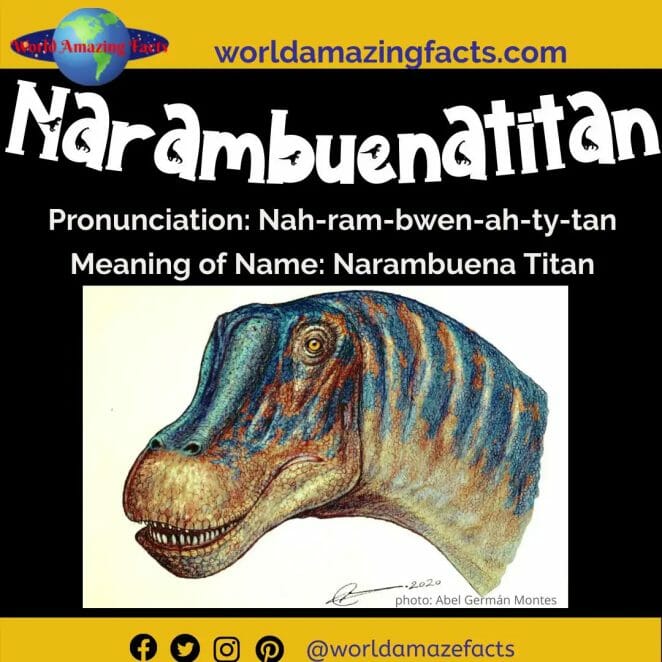 Narambuenatitan is an Argentine titanosaur. It lived in these places during the Late Cretaceous period. This titanosaur is characterised by nine autosuits. They include the morphology and placement of skull apertures, as well as the morphology of vertebrae (including pleurocelles) and their appendages.

The generic name Narambuenatitan translates as “Titan from Puesto Narambuena,” the location where the holotype was discovered. The genre name polomoi honours Salvador Polomo, the technician at the Neuquén City Museum who discovered the holotype.

Narindasaurus is a sauropod of the Turiasauria group that lived in Madagascar during the Middle Jurassic period.

The generic name was derived from the name of the nearby bay (Narinda Bay) and the Greek word “sauros,” which means “lizard.” The species name honours Armand Thevenin, the palaeontologist who initially described the Narindasaurus specimens. 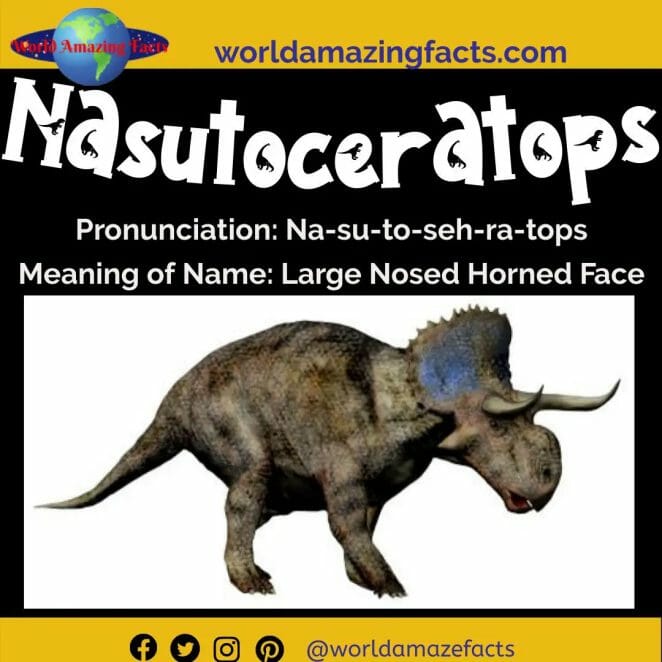 Nasutoceratops titusi is a basal centrosaurin with an unusual skull structure that lived in North America during the Late Cretaceous period. The paleontological world first heard about it in 2010, when Eric Lund named it “Nasutuceratops titusi” in his dissertation.

Nasutoceratops is a combination of Latin nasutus (big nosed) and gr. ceratops (horned face) and refers to the unusual morphology of its mouth. The species name titusi honours palaeontologist Alan Titus. 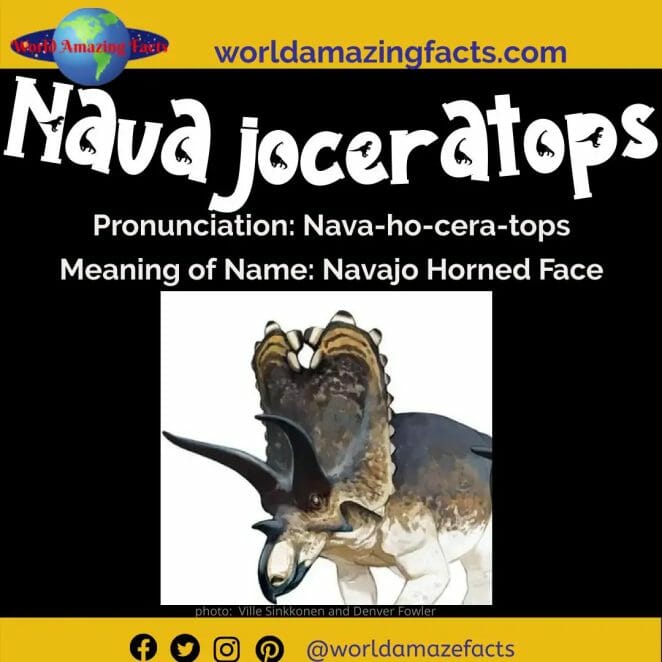 Navajoceratops is a type of ceratops from the Chasmosaurinae clade that lived in North America during the Late Cretaceous period. Denver Fowler and Elizabeth Freedman Fowler named and described the Navajoceratops in 2020.

Navajoceratops is named after the Navajo tribe of the San Juan Basin. The second part of the name means “horned face” and is commonly used in ceratops nomenclature. The species name sullivani honours Dr. Robert Sullivan, the expedition leader who discovered the dinosaur’s remains. 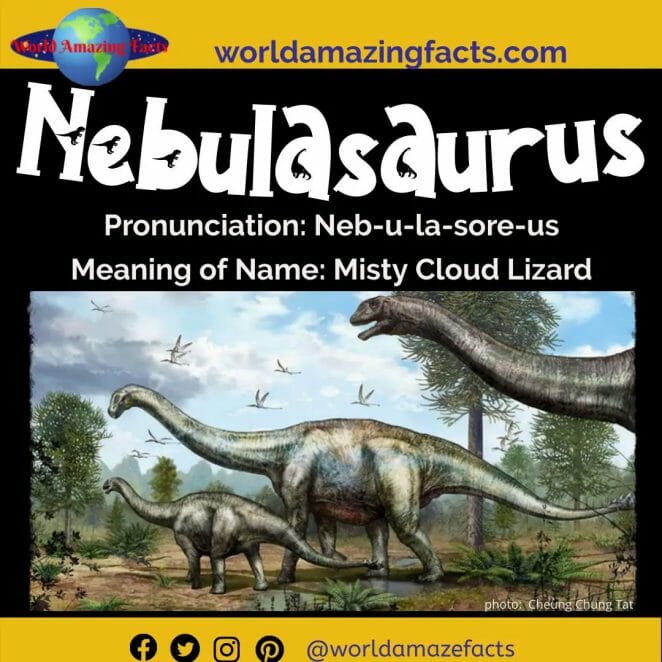 Nebulasaurus is a Chinese sauropod from the Middle Jurassic period. The name is derived from the Latin nebulae, which means “misty cloud,” and the Greek sauros, which means “lizard.”

It refers to the province of Yunnan, where the fossil was discovered, because the name of the province in Chinese means “southern cloudy province.” The second part of the name honours the Japanese Taito corporation, which funded field research in and around the location where this dinosaur was discovered. 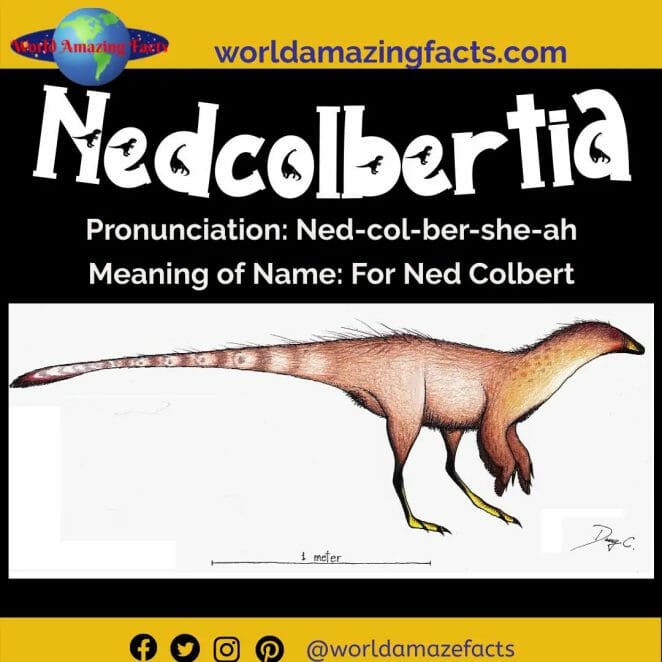 Nedcolbertia is a mysterious theropod that lived in what is now Utah, USA, during the Early Cretaceous period. We have three incomplete Nedcolbertia skeletons. Despite this, Nedcolbertia is still a poorly understood dinosaur. 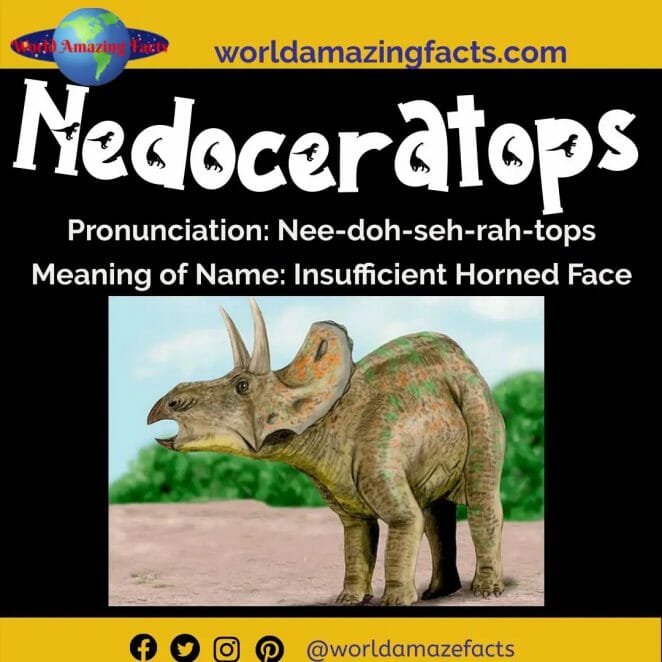 Nedoceratops hatcheri is a controversial species of sophisticated chasmosaurin (triceratopsin) from North America’s late Cretaceous period. So yet, just one rather well-preserved 1.8-m-long skull (USNM 2412) has been unearthed.

The name Nedoceratops, which means “insufficient horned face,” refers to the absence of a nasal horn in its head. 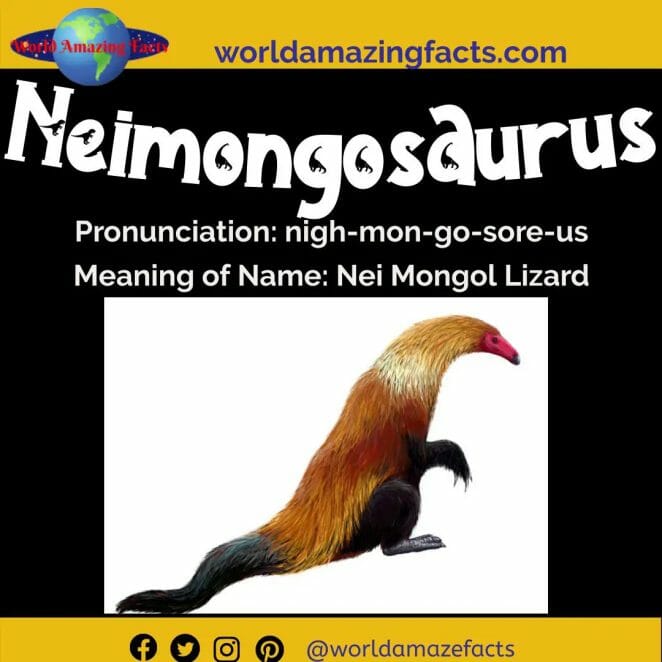 Neimongosaurus was a therizinosaurus that lived in Central Asia during the late Cretaceous epoch. The Neimongosaurus had a long neck and a small tail.

The name Neimongosaurus translates as “Inner Mongolian lizard.” Inner Mongolia is a Chinese territorial division with a misleading name that is frequently confused with a neighbouring country (the original name is Nei Mongol). 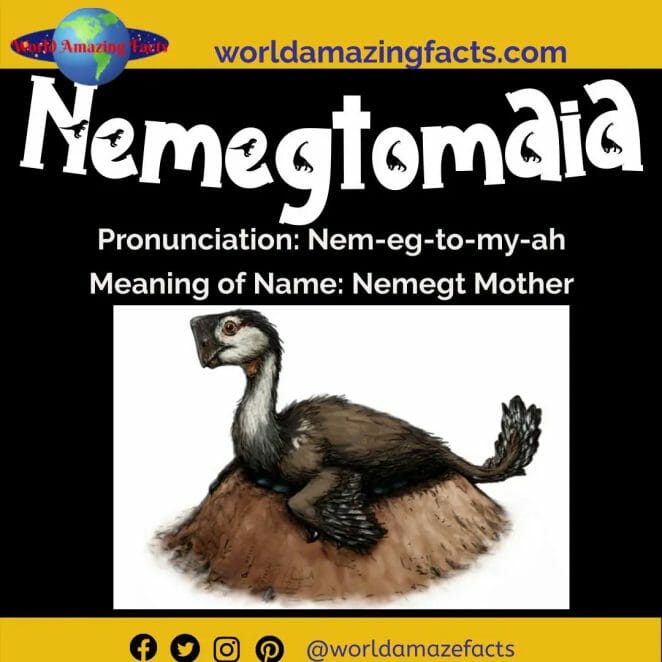 Nemegtomaia is an oviraptorid that lived in Late Cretaceous Mongolia. N. barsboldi, a typical species, was described in 2004 by Lü, Tomida, Azuma, Don, and Lee. The generic name was originally Nemegtia, but this name was chosen to designate a certain Mongolian couple. As a result, in 2005, the dinosaur was dubbed Nemegtomaia.

The name simply means “mother of Nemegt” and refers to the location of the remains, the Nemegt Basin. Members of the Mongolian Highland International Dinosaur Project named the genre after Mongolian palaeontologist Rinchen Barsbold, one of the project’s organisers. 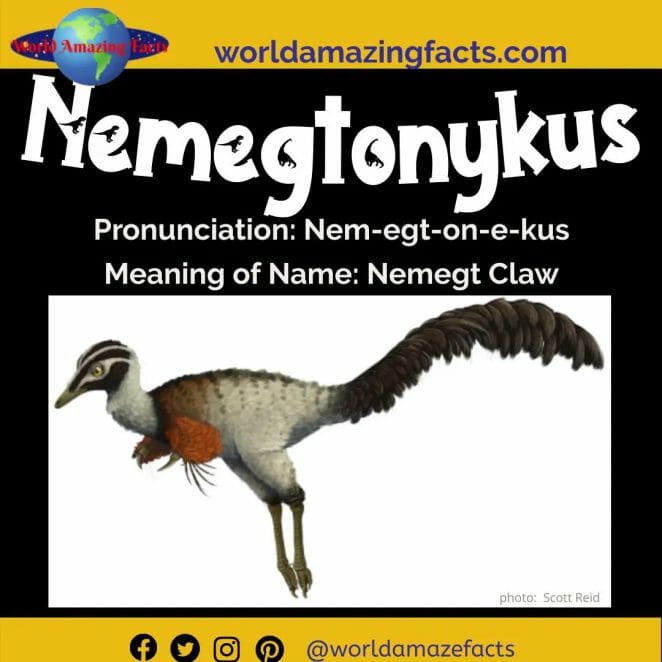 Nemegtonykus is a small member of the Parvicursorinae clade that lived in Mongolia’s current Gobi Desert about 70 million years ago. Nemegtonykus was described in 2019 by a research team that included Rinchen Barsbold, among others.

The name Nemegtonykus citus translates as “Nemegt’s quick claw.” It refers to the geological formation in which theropod remains were discovered, as well as the animal’s alleged lifestyle. 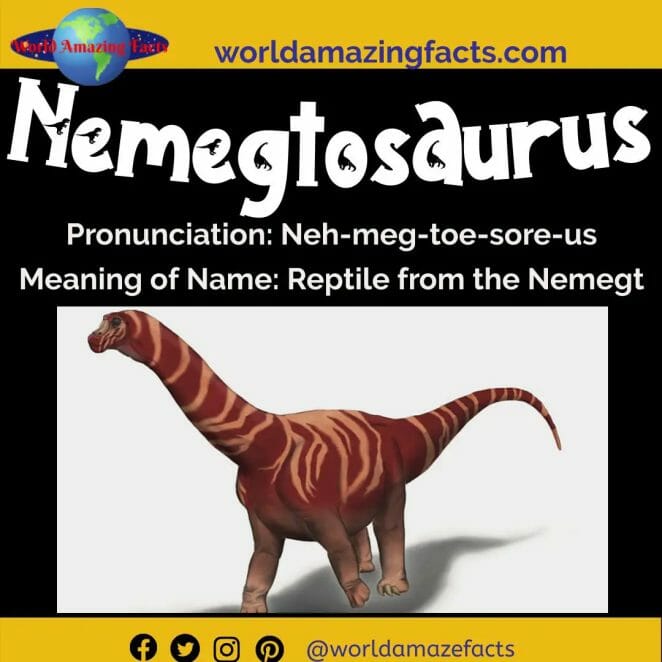 Nemegtosaurus was a titanosaur that existed in what is now Mongolia during the late Cretaceous period. This genus has two described species: N. mongoliensis and N. pachi, the latter of which is nomen dubium.

Although Nowiski (1971) did not explain the etymology of Nemegtosaurus mongoliensis, this dinosaur’s name most likely means “Mongolian Nemegt lizard.” 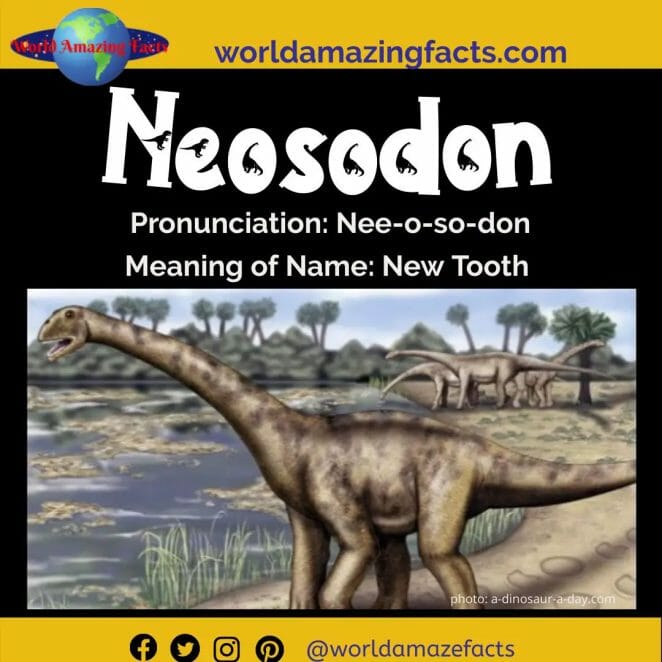 Neosodon is a dubious sauropod found in the Late Jurassic of modern-day France. Perhaps Neosodon belonged to the Turiasauria family. 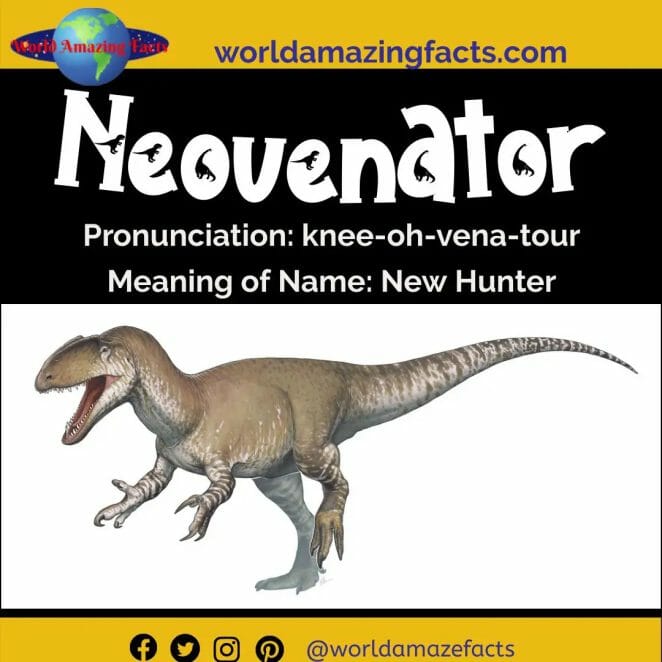 Neovenator is a European Allosauroid that was previously classed as a member of the Allosauridae family. After detailed examination of Neovenator fossils, it was discovered that Neovenator was connected to the Carcharodontosauridae, which Neovenator was frequently associated with. Neovenator was later given a new family, Neovenatoridae.