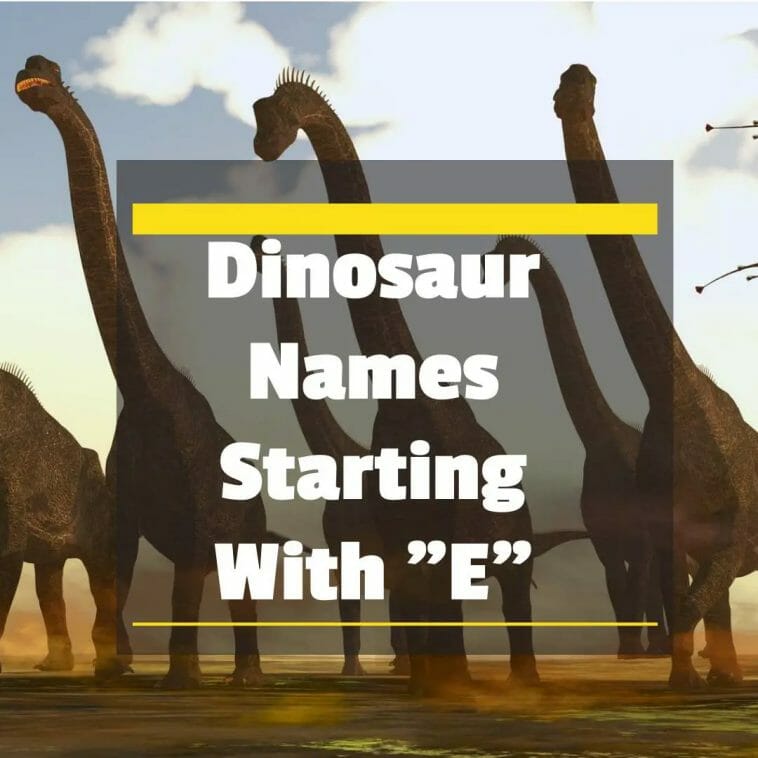 Check out the alphabetical list of dinosaur names beginning with the letter “E”. We’ll look at dinosaur pictures and discuss what their names mean, as well as learn more about dinosaur facts.

Dinosaurs with names that begin with the letter “E”

Contents for Dinosaur Names that Start with “E” 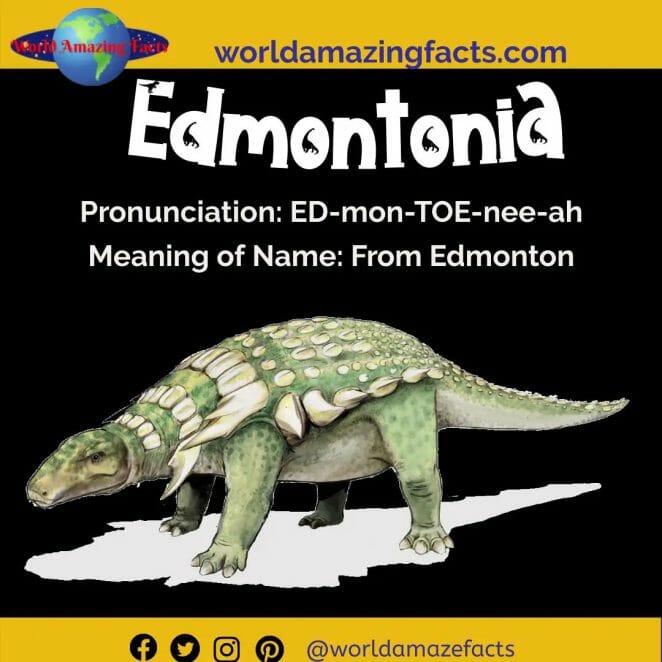 Edmontonia was a late Cretaceous herbivorous dinosaur from North America that was huge and strongly armoured. It belonged to the Nodosauridae family, which differed from the related Ankylosauridae in several ways, including the absence of a tail club.

Edmontonia is named after the Edmonton Formation in Canada, which is currently classified as a group. The usual species’ generic name (Edmontonia longiceps) means “long-headed,” whereas E. rugosidens means “rough-toothed.” 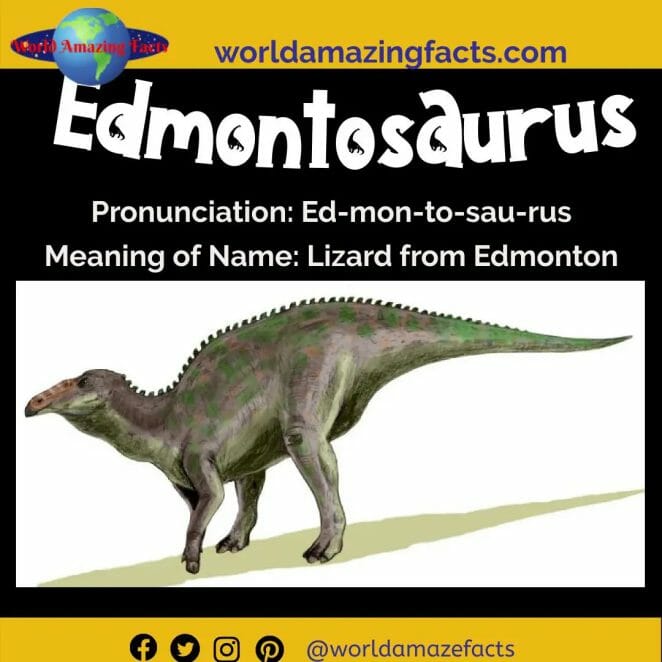 Edmontosaurus was a flat-headed hadrosaurid that lived during the Late Cretaceous period in North America. Lambe (1917) does not provide an explanation for the name’s derivation, but it is likely that it is derived from the Edmonton group. 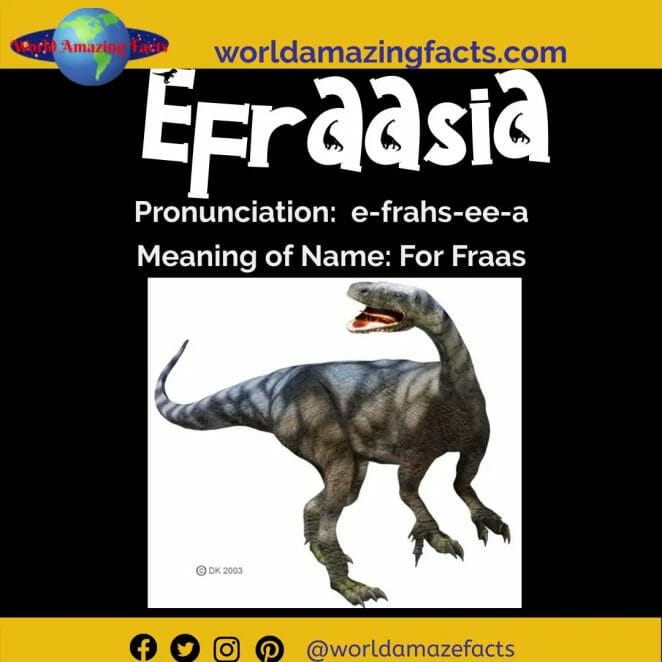 Efraasia is a sauropodomorph that lived in Germany during the late Triassic period. Its remains were discovered at the turn of the twentieth century, giving it a long and difficult taxonomic history. Professor Eberhard Fraas, who discovered the bones, was given the generic name Efraasia. 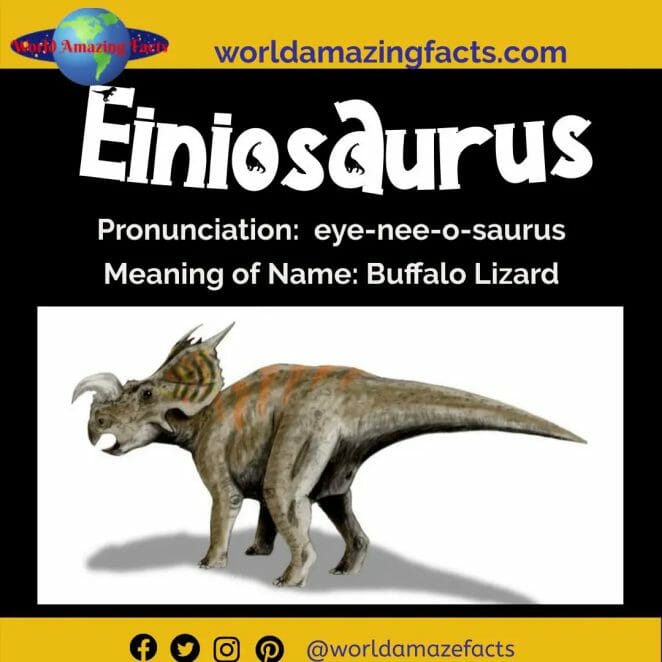 Einiosaurus was a herbivorous ceratopsian dinosaur that lived in northeastern Montana during the Upper Cretaceous period. Einiosaurus procurvicornis is a ceratops described in the same 1995 article as Achelousaurus horneri by the same palaeontologist, Sampson. These genera were related but did not appear at the same time or place – the Achelouzaurus came later.

Einiosaurus procurvicornis translates as “forward-horned buffalo lizard.” The name alludes to the fact that this dinosaur only had one nose horn (in addition to two on the collar) and that it bent unusually towards the front of the head. The Blackfeet people lived in the area where the einiosaurus was discovered, and the term einio, or “bison,” was borrowed to form the dinosaur’s name. 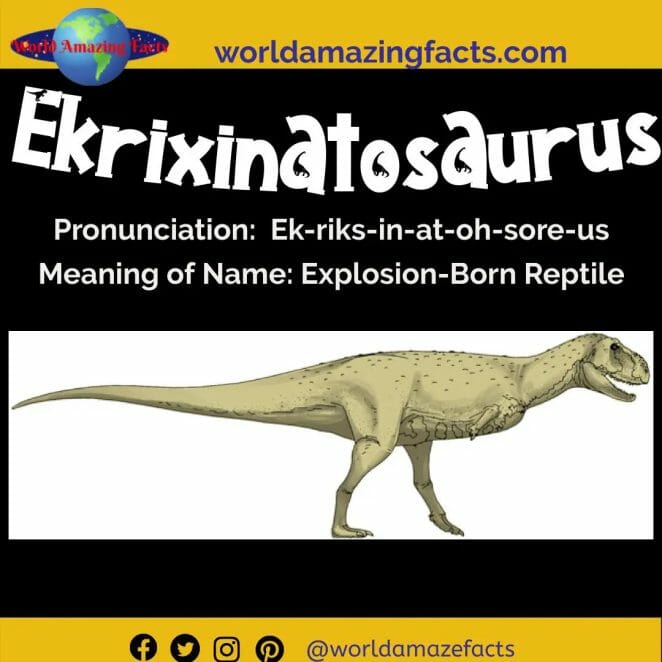 Ekrixinatosaurus was an Abelisaurid that lived in what is now Argentina (Neuquén province, Patagonia) during the Late Cretaceous period. This dinosaur’s fossils were discovered in 1999 but were not described until 2004.

The discovery of Ekrixinatosaurus was made possible by the use of explosives, hence the name “lizard born by an explosion” ( Ekrixi is Greek for “explosion”, Latin for “birth” and saurus – Greek for “lizard”). The genre name was given in honour of Fernando Novas, a palaeontologist who worked on the Abelisaurides among other things. 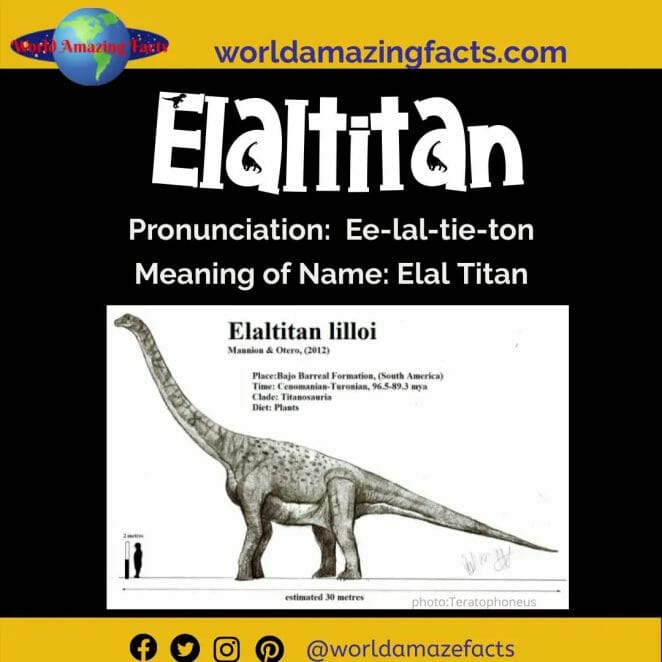 Elaltitan is a sophisticated titanosaur whose remains were discovered in modern-day Argentina (Chubut province). Elaltitan was previously classified to other titanosaurs, Antarctosaurus and then Argyrosaurus, but a thorough analysis of Mannion and Otero (2012) revealed that they represent a unique type of sauropod.

Elal is a creator god in the beliefs of the Tehuelcze people of Patagonia’s Chubut province. In turn, the titan is a Greek mythological giant. As a result, its name translates as “elal titan.” The genre name lilloi recognises Miguel Lillo for his contributions to the natural sciences in Tucumán. 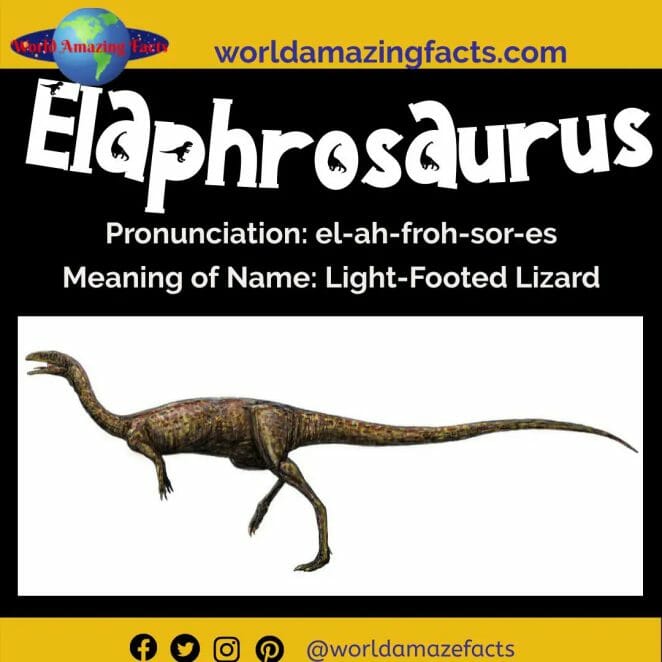 Elaphrosaurus is a Ceratosaurus that lived in Africa during the Late Jurassic period. Its name translates as “agile lizard.”

The Greek words elaphros (light walking) and sauros (lizard) both relate to a light and slender build. The genre name honours Paul Bamberg, who contributed significantly to the German expedition to Tendagur in Tanzania. 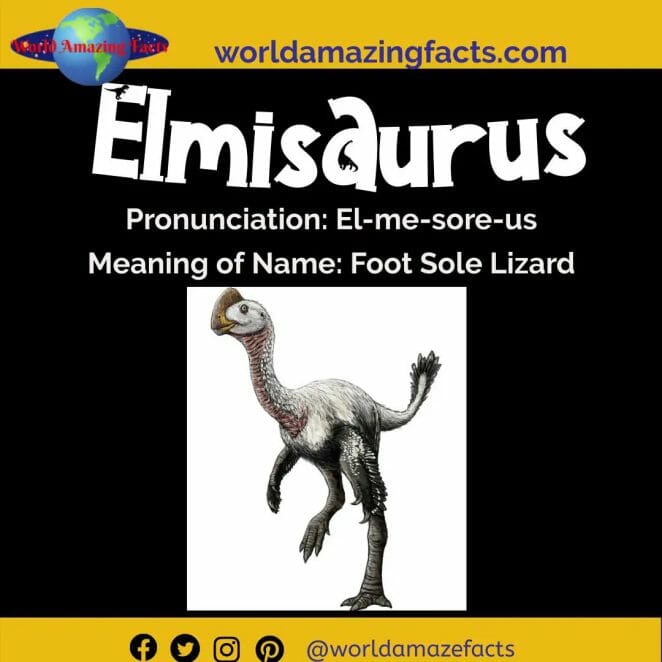 Elmisaurus is the name given to Asian oviraptorosaurus fossils. This genus is primarily represented by limb bones.

This dinosaur’s name alludes to the fact that the typical specimen is a foot – ” elmyi ” is Mongolian for “foot.” The usual species’ name (rarus) is Latin for “rare.” 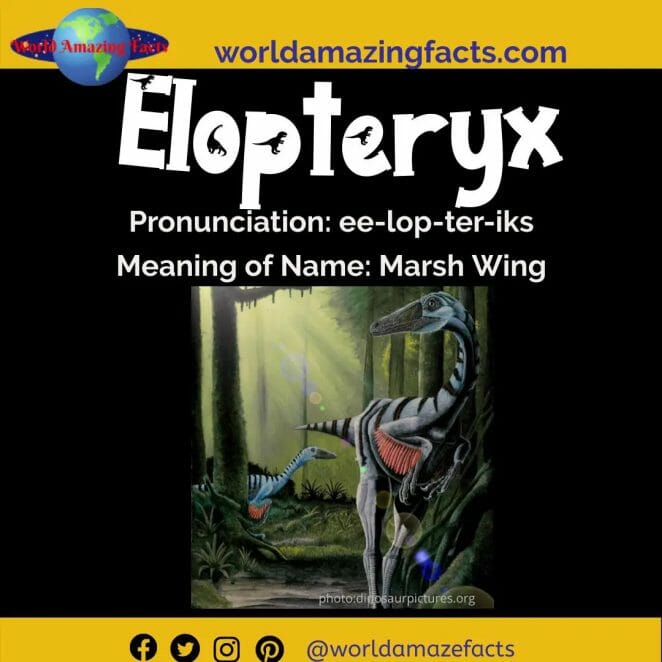 Elopteryx is a tiny, poorly known late Cretaceous theropod from Romania. Because of the rarity of the remains, it is a nomen dubium. 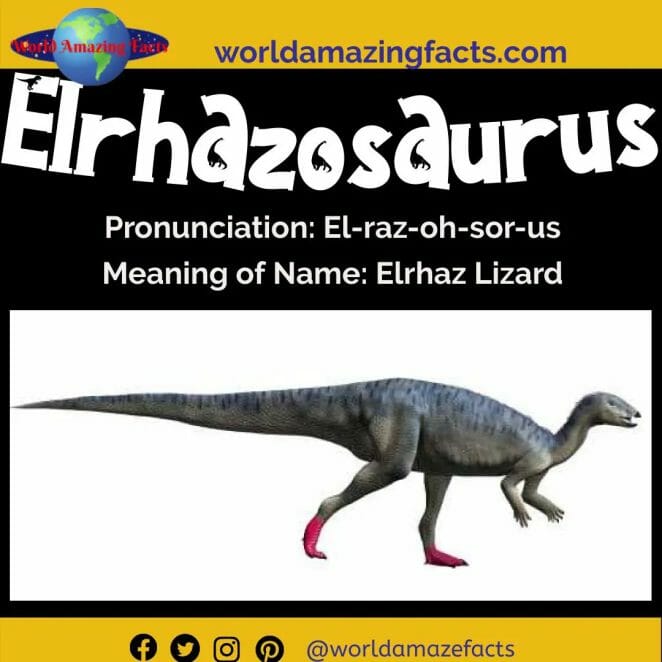 Elrhazosaurus was a primitive iguanodont that lived in what is now North Africa during the early Cretaceous period. It was classified as a species of Valdosaurus for many years before being reassigned to a distinct genus in 2009. Elrhazosaurus was a tiny herbivore that was presumably bipedal and had a modest build. 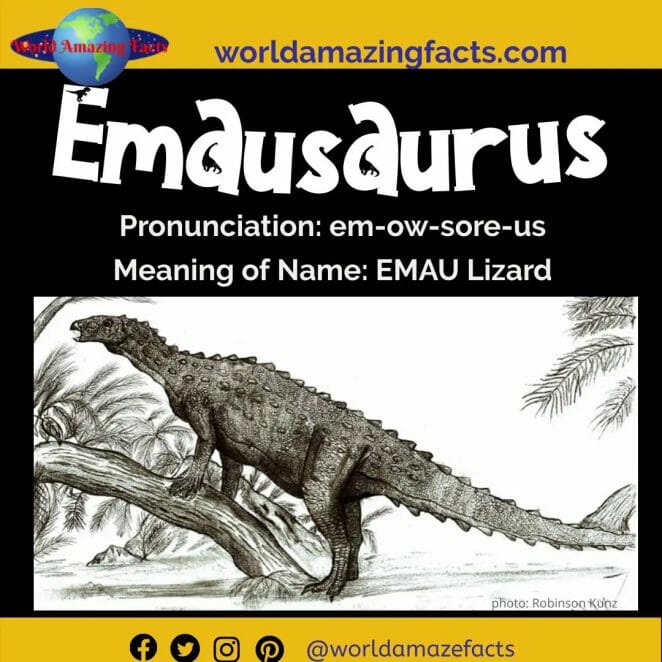 Emausaurus was a bird-pelvis dinosaur that lived in the early Jurassic period (early toarcian ). This reptile’s fossils have been discovered in modern-day Germany. Emausaurus possessed small, leaf-shaped teeth that it used to pull low-growing plants like ferns and cycads. Haubold described the only typical species, E. ernsti, in 1990. 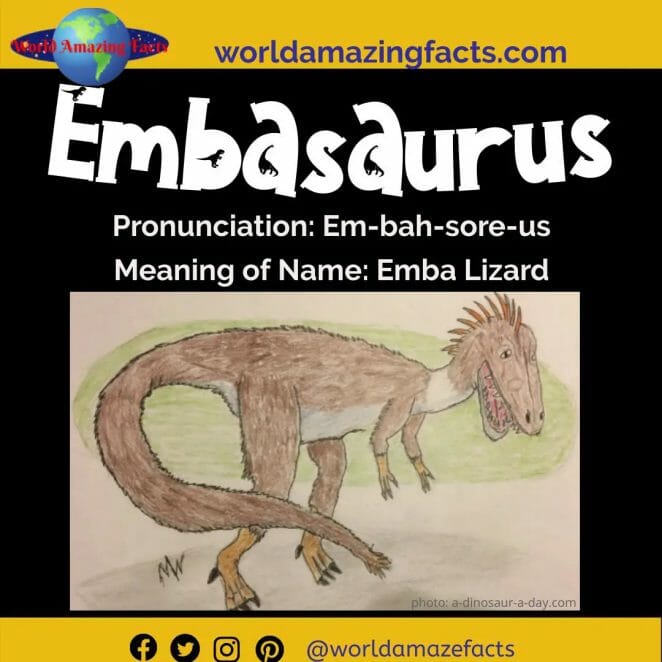 Embasaurus was a dinosaur genus that lived during the Early Cretaceous period. The fossils were discovered in Kazakhstan’s Neocomian Sands.

The name Embasaurus was derived from the Emba River, near which the fossil was discovered in Kazakhstan, and the Greek word sauros, meaning “lizard.” 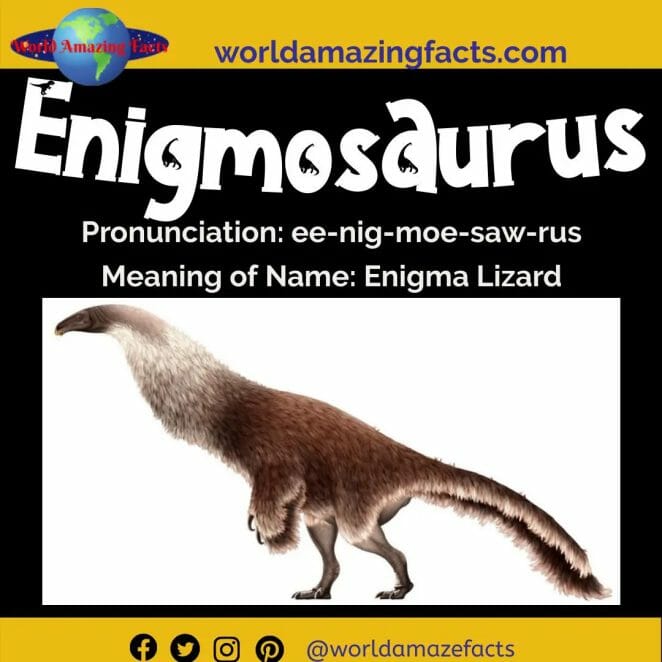 Enigmosaurus mongoliensis is an advanced therizinosaurus from Mongolia’s Late Cretaceous epoch. It’s probable it’s the same species as Erlikosaurus, which is only known for its head, foot, and humerus. 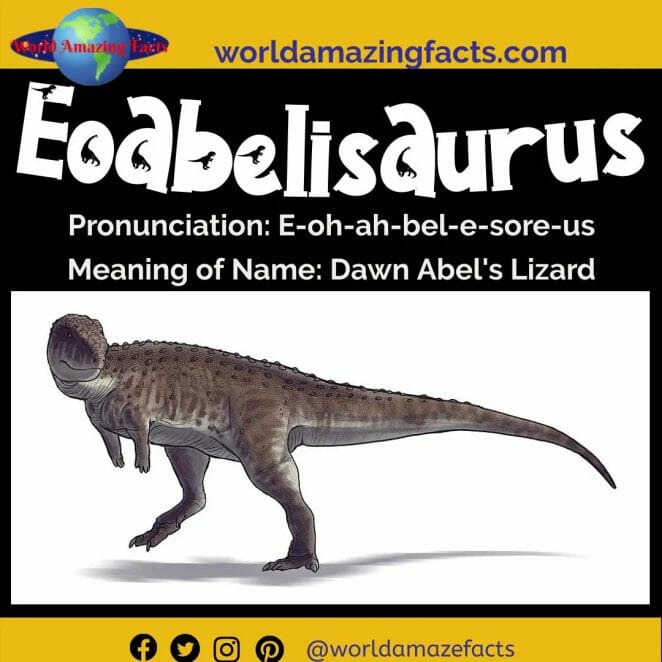 The generic name Eoabelizaura is derived from the Greek word eos, which means “dawn,” and the genus Abelisaurus, which is a typical member of the Abelisauridae. The species name (mephi) relates to the Museum of Paleontology. MEF stands for Egidia Feruglio. 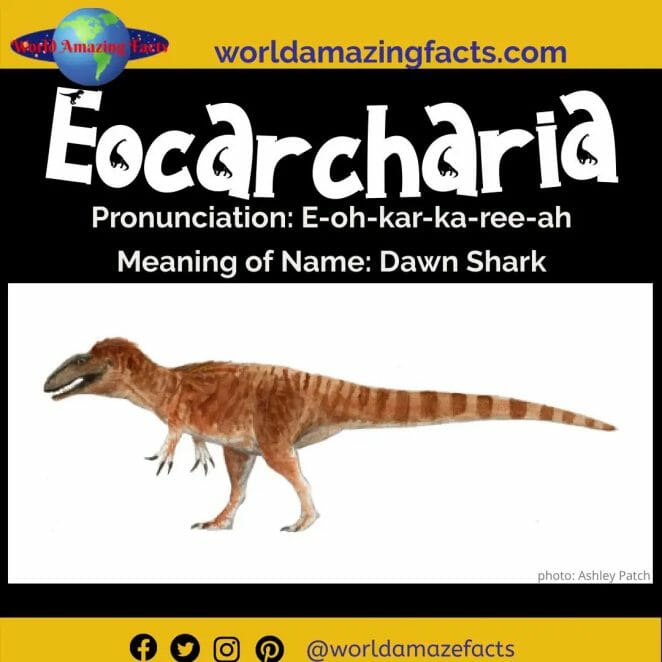 Eocarcharia is a carnosaurus unearthed in Niger by Paul Sereno’s expedition. Three small perforations in the jawbone and an oval protrusion over the eye distinguish Eocarcharia from other carcharodontosaurids.

Eocarcharia literally means “early shark,” derived from the Greek eos, which means “dawn, beginning,” and karcharias, which means “shark,” and refers to the basal position of the “sharktooth” theropod in the Carcharodontosauridae group. Dinops (Greek meaning “wild-eyed, fierce”) refers to the huge elaboration of the eyebrows above the eye. 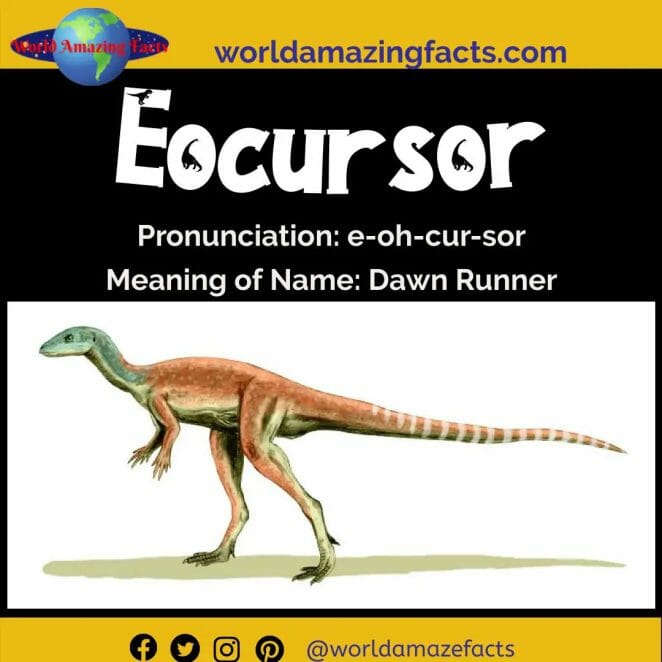 Eocursor is a type of dinosaur that was described in 2007 and whose remains were discovered in South Africa (South Africa) in 1993. The finding of Eocursors permits palaeontologists to address knowledge gaps about the early representatives of the Ornithischia group.

Palaeontologists only know that they first arose around 230 million years ago in the Triassic period. However, these are still hypotheses because there are very few fossils of ornithischia dinosaurs from that time period. As a result, it is unclear when their line of development began.

Eocursor gets its scientific name from the Greek word eos (early) and the Latin terms cursor (runner) and parvus (parrot) (small). So it simply means “early tiny runner.” 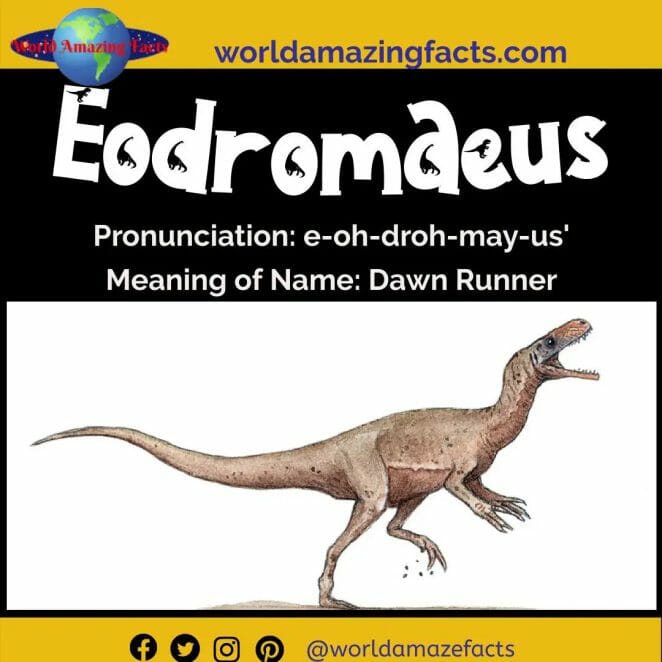 Eodromaeus is a prehistoric dinosaur from the South American Triassic period, possibly related to theropod neoteropods. Eodromaeus was a small predator that preyed on smaller animals.

Eodromaeus gets its name from its young age and the slender proportions of its limbs and axial skeleton. It was formed by combining the Greek words eos (dawn) and dromaeus (Greek runner). J. Murphy, an Earthwatch volunteer who discovered the eodrome holotype, is honoured by the species epithet (murphi). 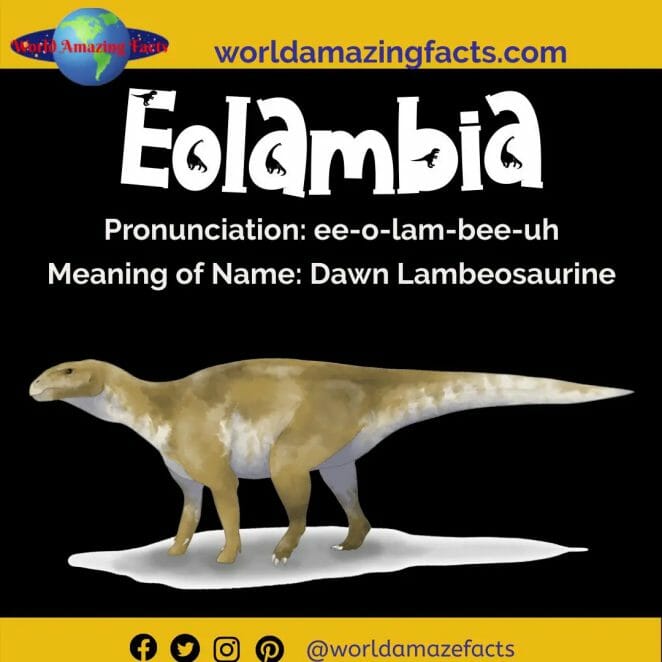 Eolambia was a herbivorous dinosaur that existed in the present-day United States during the early Late Cretaceous epoch. Eolambia was a medium-sized ornithopod that was once thought to be the oldest hadrosaurid but is now thought to be a more basic representative of the Hadrosauroide group.

The name Eolambia means “early Lambeosaurin” and relates to the authors’ mistaken belief that it was a representative of the Lambeosaurinae. Surprisingly, The name Eolambia was created by a paleoartist named Michael Screpnick. Carol Jones, the discoverer of the eolambia remains, is honoured by the genre moniker ( Kirkland , 1998).