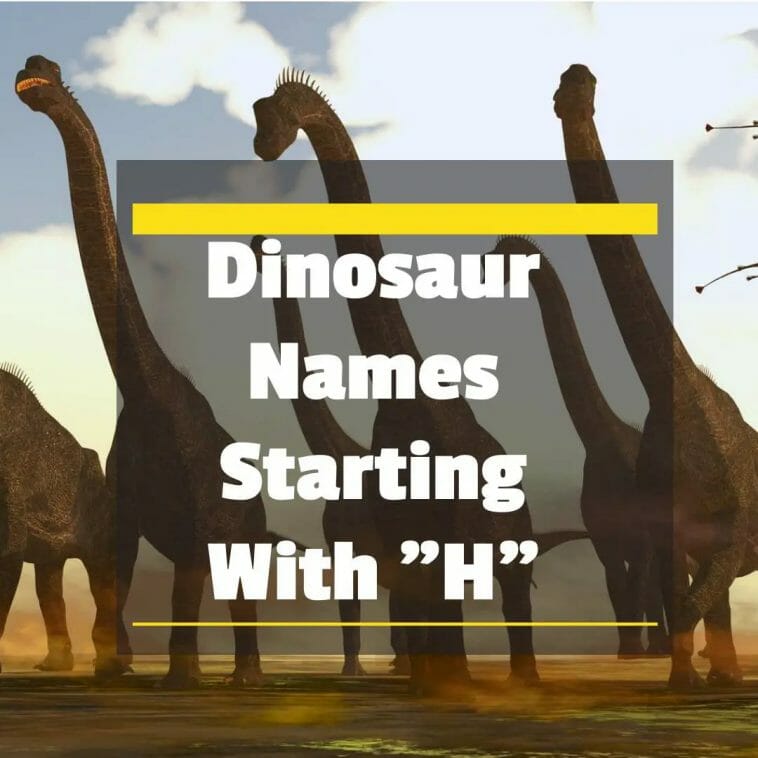 Check out the alphabetical list of dinosaur names beginning with the letter “H”. We’ll look at dinosaur pictures and discuss what their names mean, as well as learn more about dinosaur facts.

Dinosaurs with names that begin with the letter “H”

Contents for Dinosaur Names that Start with “H” 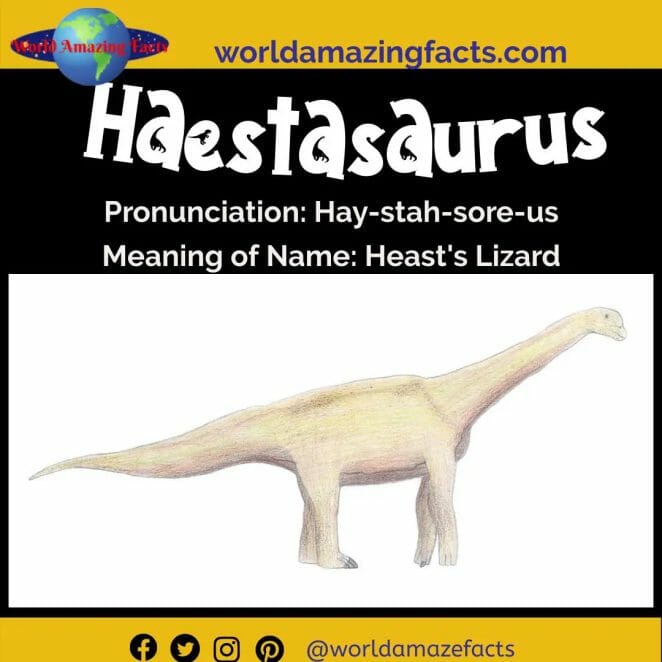 Haestasaurus is a genus of herbivorous sauropod dinosaurs that lived in England during the Early Cretaceous. It belonged to the Macronaria.

The scientific name Haestasaurus translates to “Heast’s lizard.” Heast is a purported pre-Roman commander who established a settlement and fortification close to where the holotype was discovered. The second element, sauros, is derived from the Greek for “lizard.” In turn, the specific name becklesii commemorates Samuel H. Beckles, the holotype’s discoverer. 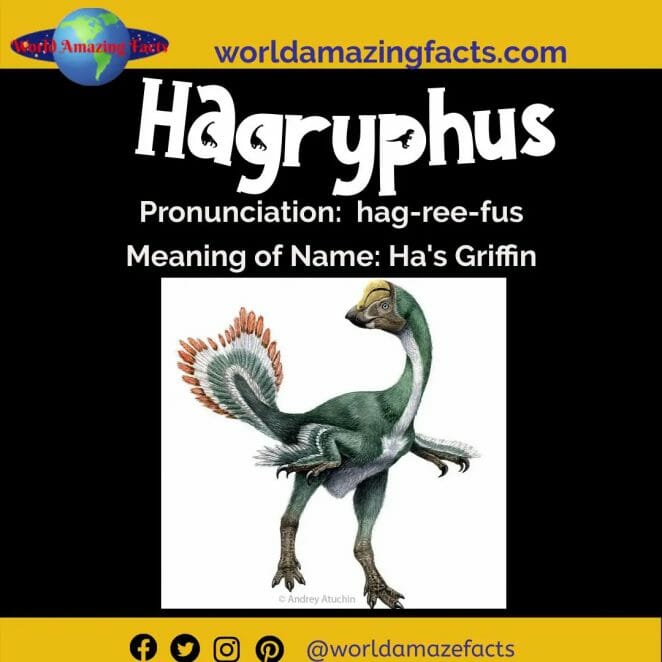 Hagryphus is a theropod from Utah’s Late Cretaceous period (USA ). Its fossilised remains were discovered among the strata of the Kaiparowits Formation.

Hagryphus ( Ha – Egyptian god of the desert and the Greek word gryphus , meaning the mythical griffin). The designation giganteus refers to the enormous size of Oviraptorosaurus. 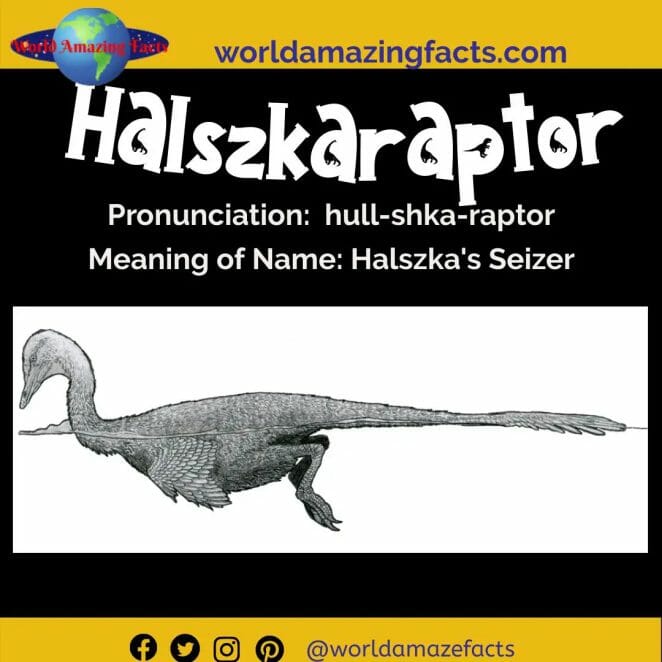 Halszkaraptor is a genus of small yet peculiar theropods, perhaps belonging to the Dromaeosauridae family, that existed in Mongolia during the Late Cretaceous.

The name Halszkaraptor is a tribute to the Polish palaeontologist Halszka Osmólska for her contributions to theropod studies. The second part, raptor, derives from the Latin word for “thief” or “robber.” The generic epithet refers to Francois Escuillié, who returned the holotype to Mongolian authorities and made it available to scientists in the past. 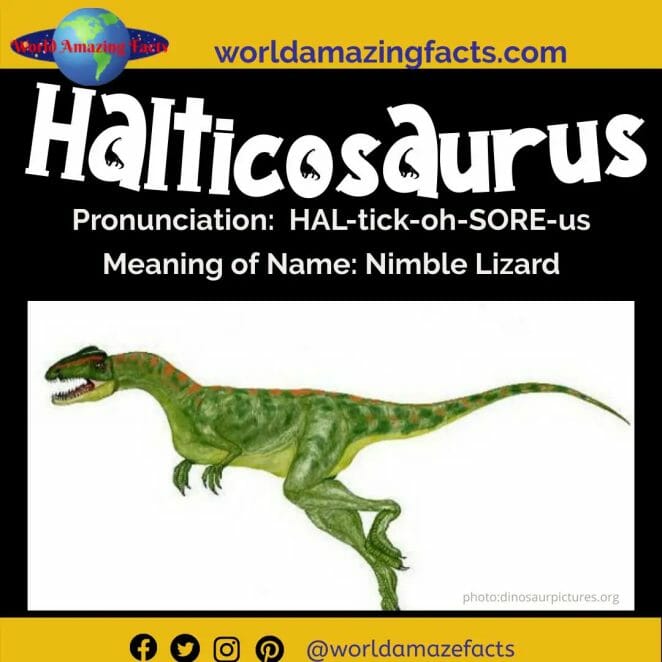 Halticosaurus is a dubious theropod that existed in what is now Germany during the late Triassic period.

The name Halticosaurus means “agile lizard.” A typical species’ epithet (longotarsus) alludes to one of its constitutional traits and signifies “long walk.” 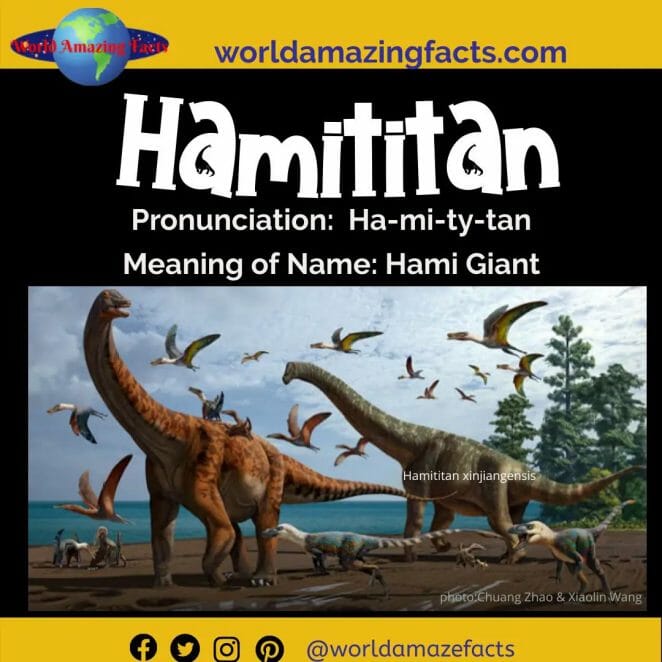 Hamititan is a kind of sauropod that lived in what is now China during the early Cretaceous period.

The name Hamititan is derived from Hami and the term titan (referring to the titans in Greek mythology, which refers to their enormous size). The genre name is derived from Xinjiang Province. 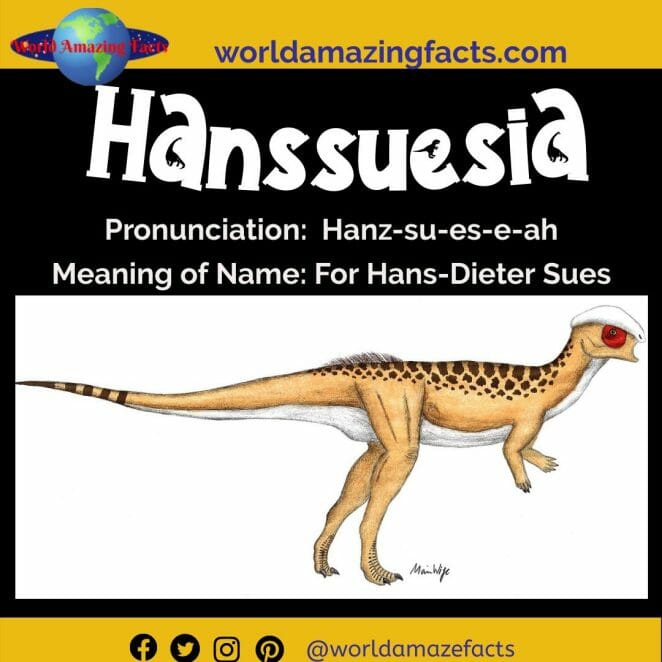 Hanssuesia was a pachycephalosaurid species that lived in what is now Alberta and Montana during the late Cretaceous period. Hanssuesia lived alongside his close cousins, Prenocephale brevis and Stegoceras validum, at the same period and in the same place.

Robert M. Sullivan was the first to identify the genus Hanssuesia in 2003. It is named after palaeontologist Hans-Dieter Sues. The specific name was chosen to honour Charles Mortram Sternberg, who discovered the dome in 1928 in Steveville, Alberta. 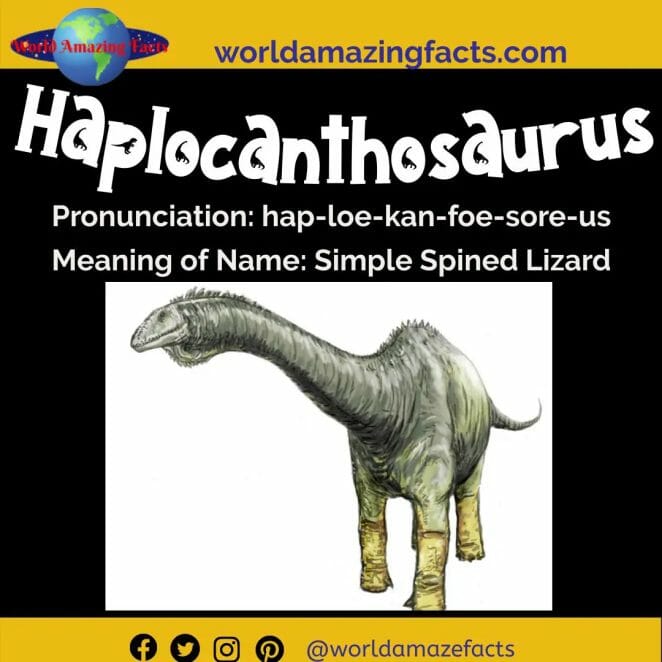 Haplocanthosaurus was a sauropod that lived in the United States during the late Jurassic period. It is one of several sauropods in the Morrison Formation, but it is highly distinctive – rare, primitive, with questionable classification, and smaller than most sauropods.

Haplocanthosaurus is a Greek word that meaning “rectangular lizard” (haplos = “one simple” + akantha = “spike” + sauros = “lizard”). The term was given because the neural spines on the posterior cervical and anterior dorsal vertebrae are exceedingly basic compared to other sauropods. 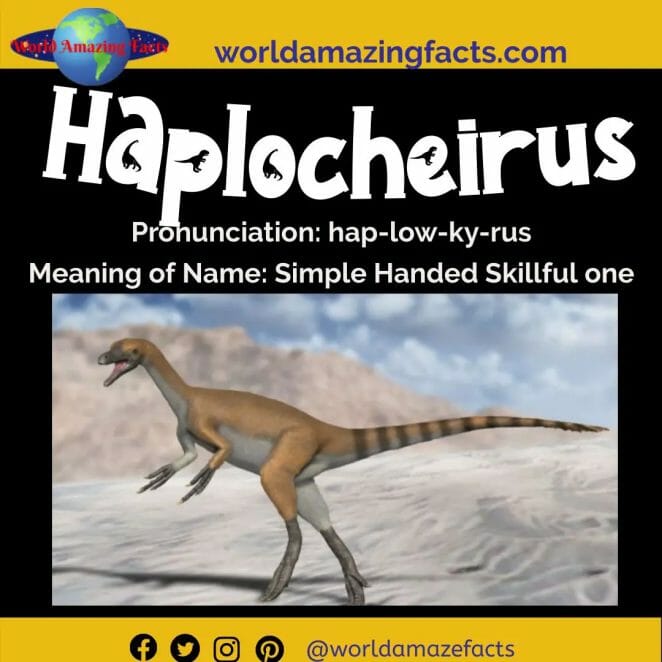 Haplocheirus is a Latinized variant of the Greek word haplocheir, which means “straight hand,” and refers to a non-specialized hand structure in comparison to more complex alwarezzauroids. sollers (Latin for “skillful”) was given to the species because the taxon was likely capable of moving fingers in ways that alwarezzaurides could not. 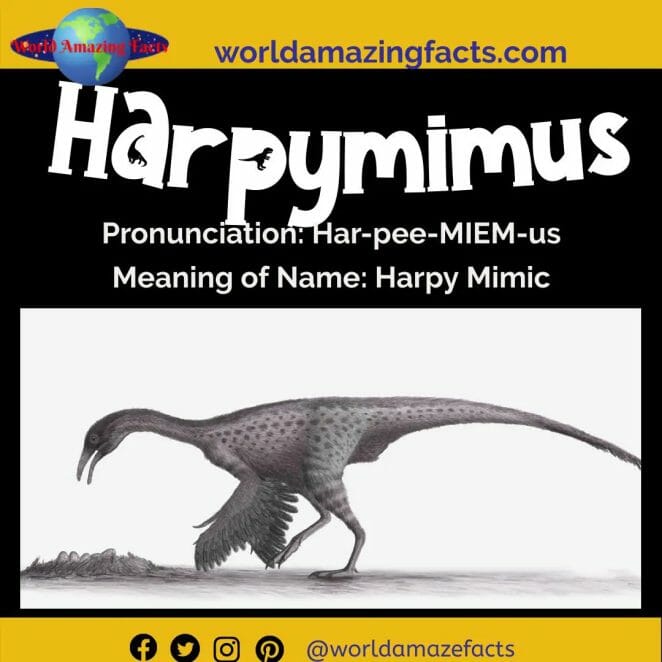 Harpymimus is a theropod that lived in Mongolia during the early Cretaceous period.

The generic name is a combination of the Greek words harpyiai, which means “harpy,” and mimos, which means “follower” (monsters from Greek mythology). The scientific name commemorates Russian palaeontologist Aleksey P. Okladnikov. 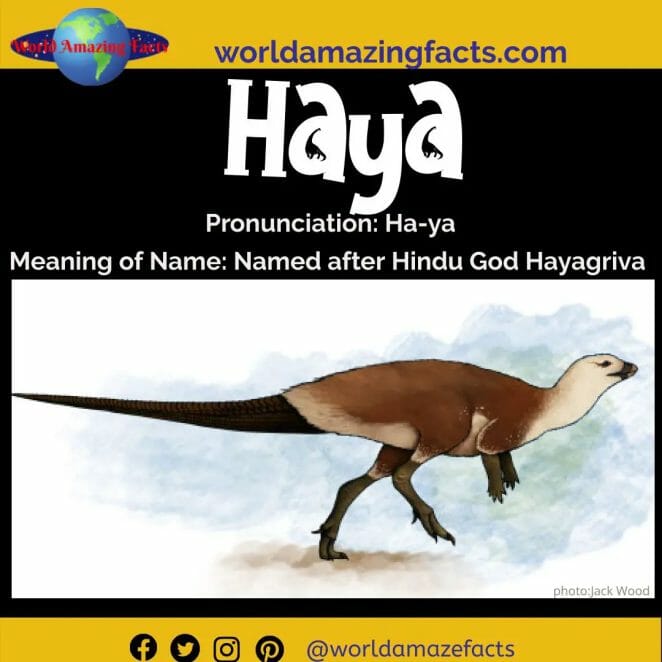 Haya was a small herbivorous dinosaur that lived in what is now Mongolia during the late Cretaceous period. Peter Makovicky and others named and described Haya in 2011 based on its entire fossil material.

The generic and species names are derived from the Hindu deity Hayagriva, who is shown with a horse’s head. It refers to the shape of the described dinosaur’s skull, which resembles the head of a horse. 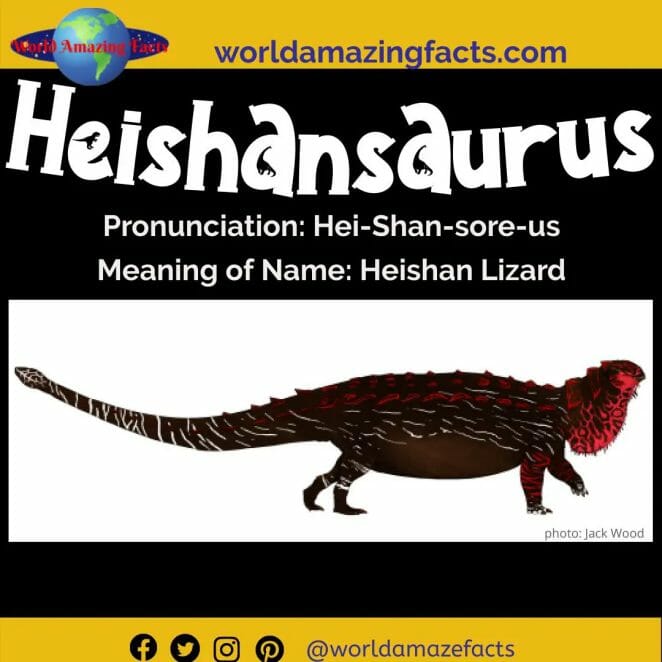 Heishansaurus is an unknown type of bird-pelvis dinosaur that existed in present-day China during the Late Cretaceous period. Birger Bohlin identified the typical species, H. pachycephalus, in 1953 based on a fragmentary skull and other bones recovered in the Minhe Formation sediments.

The name Heishansaurus means “Heishan lizard” and is derived from the name of the mountain (Black Mountain) where Heishansaurus bones were discovered. Because the skull was flattened at the top, it was given the species name pachycephalus, which means “blunt, flat head.” 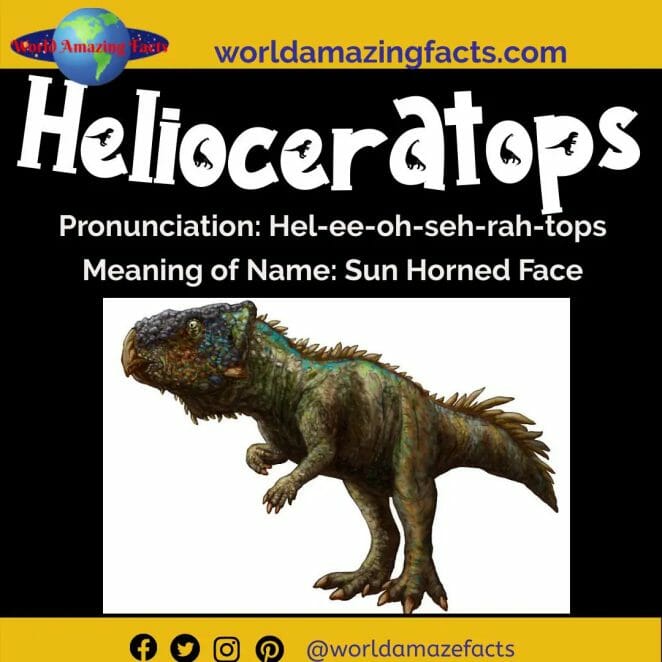 Helioceratops is a Ceratops representative that lives in modern-day Northeast China. Helioceratops bones have been dated to the appropriate – cenoman.

The generic name Helioceratops is derived from the Greek god of the Sun, Helios, who, according to ancient Greek beliefs, crossed the sky every day in his golden chariot from east to west, and the Greek ceratops (horned face). This name denotes the neoceratops’ eastern ancestry, as it is closely related to the Auroraceratops. As a result, the genre descriptor brachygnathus can be loosely translated as “short-term.” 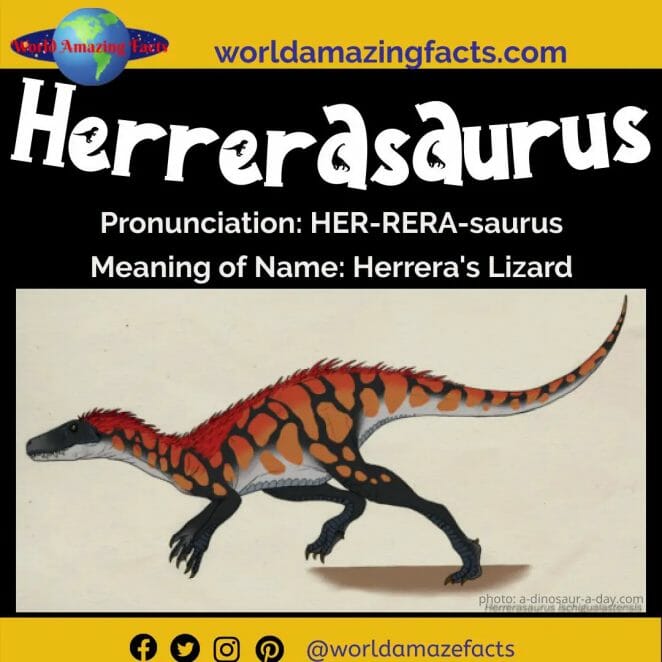 Herrerasaurus is a type of early reptile dinosaur, possibly a primitive theropod. Osvaldo A. Reig described it in 1963. It is famous for its numerous skeletons, which provide an accurate representation of the animal’s osteology. The enormous pubic bone and the substantially rectangular shape of the cranium in a lateral view are two of the most remarkable traits.

The generic name literally means “Herrera Lizard,” after Victorino Herrera, the farmer and guide who discovered the animal’s remains. The species name is derived from the Ischigualasto Formation in Argentina’s San Juan Province, where Herrerasaurus remains were discovered. 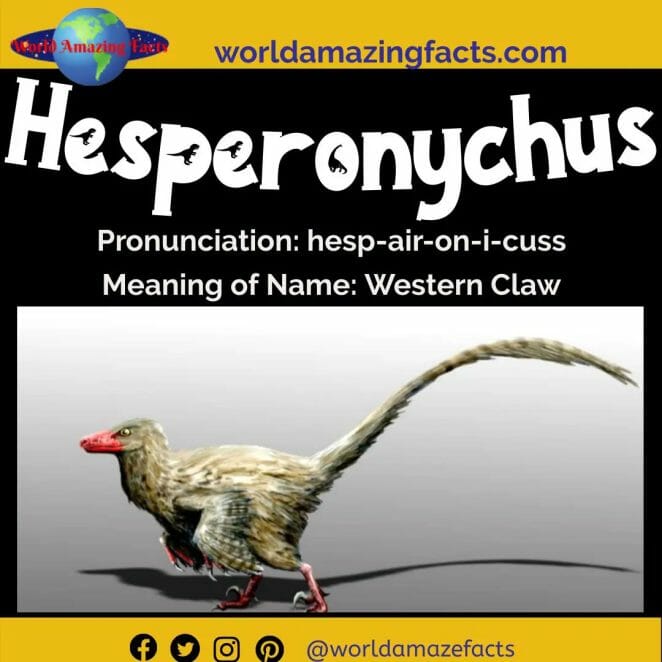 Hesperonychus was a small dromeosaurid of the microraptor group that lived in North America during the late Cretaceous epoch.

Hesperonychus is derived from the Latin hesperus (west) and the Greek onychos (claw). The species name (elizabethae) is named for the late Dr. Elizabeth Nicholls, who identified the characteristic specimen. 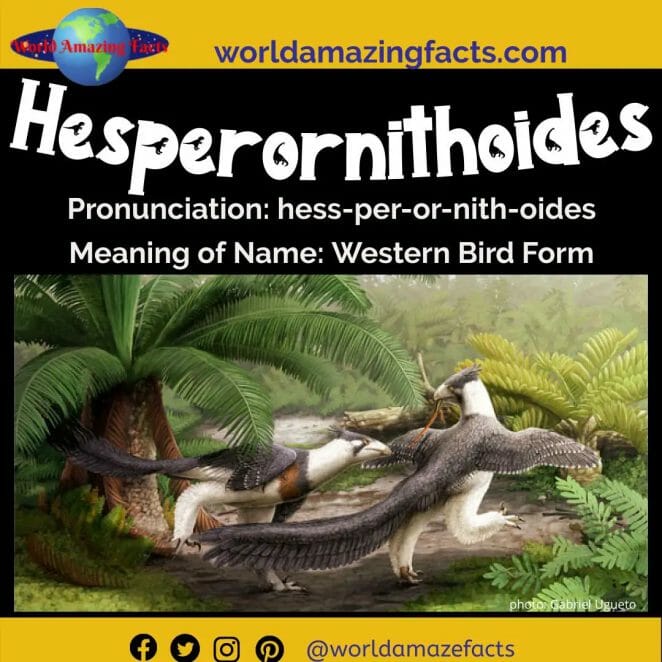 Hesperornithoides is a genus of tiny theropods in the Troodontidae family that lived in what is now the United States during the late Jurassic period. Hesperornithoides is the clade’s earliest representative from North America, with fossil evidence that contains more than simply teeth.

The name Hesperornithoides is derived from the Greek words hesperis (west), ornis (bird), and oeides (“like”). It refers to the fact that it was discovered in western North America and its likeness to birds. The genre epithet recognises the Miessler family for their assistance to the description’s creators. 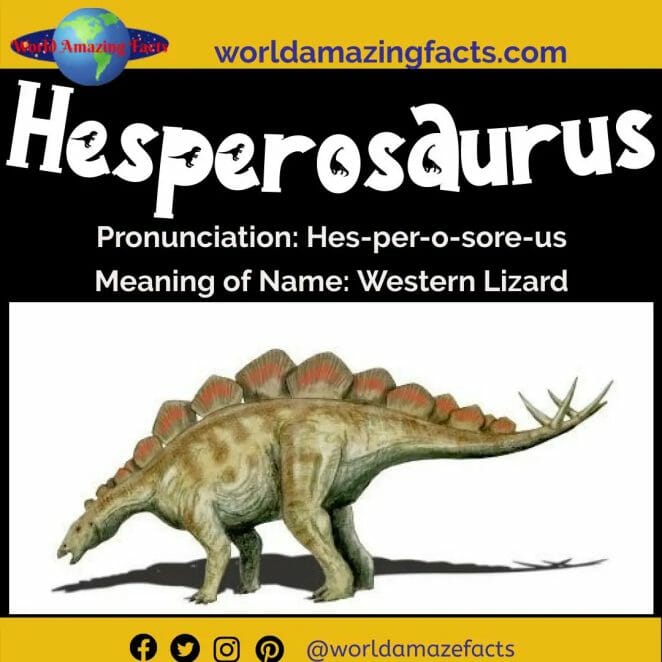 Hesperosaurus was a huge stegosaurid that lived in North America during the Late Jurassic period. Patrick McSherry discovered it in Johnson County in 1985, about five metres above the base of the Morrison Formation. This implies that Hesperosaurus is derived from the earlier layers of this well-known rock formation.

Hesperosaurus derives its name from the Greek words hesper, which means “western,” and saurus, which means “lizard” (lizard). Ronald G. Mjos, who was in charge of collecting, preparing, and assembling the holotype, was assigned the genre epithet. 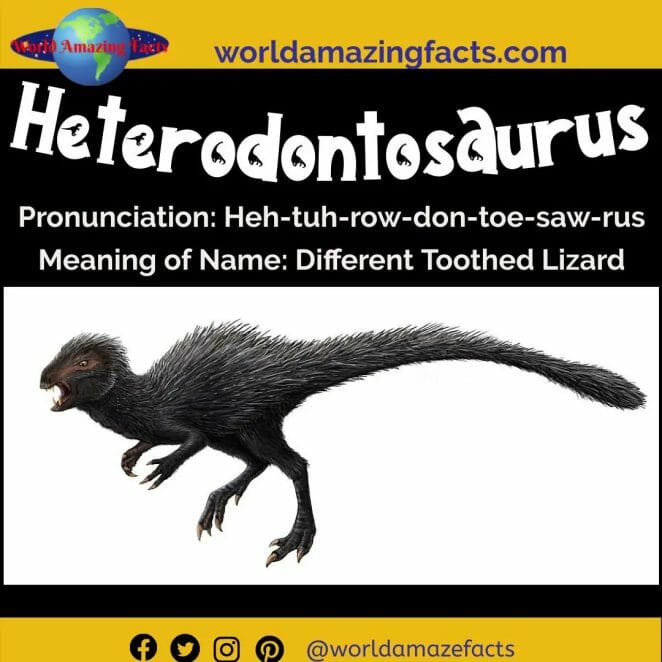 Heterodontosaurus is a primitive bird-pelvis dinosaur that lived in what is now southern Africa during the Early Jurassic period. It is an early yet specialised and advanced heterodontosaurid that is closely connected to Tianyulong or, most likely, Lycorhinus. 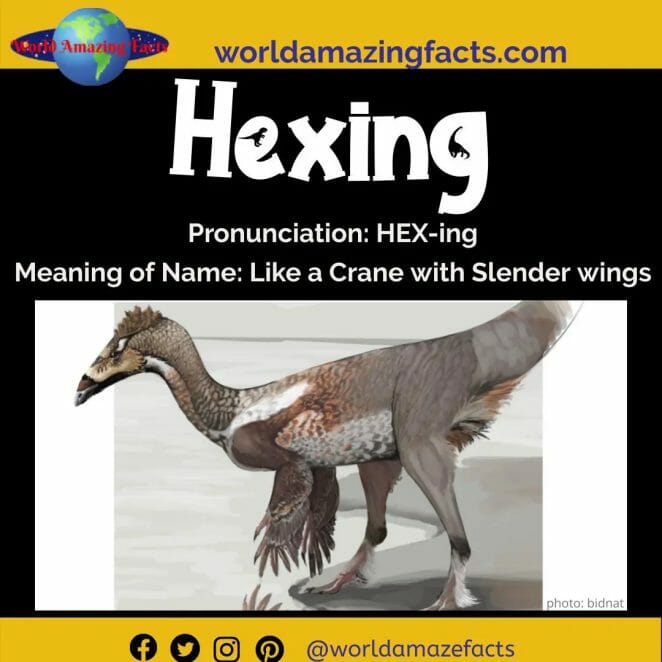 Hexing was a small basal Ornithomimosauria representative that lived in what is now Northeast China during the Early Cretaceous Period. This theropod, along with Shenzhousaurus, is the oldest known member of the Ornithomimosauria group.

The name Hexing means “pretending to be a crane” in Chinese, while the genre epithet qingyi means “with wings.”