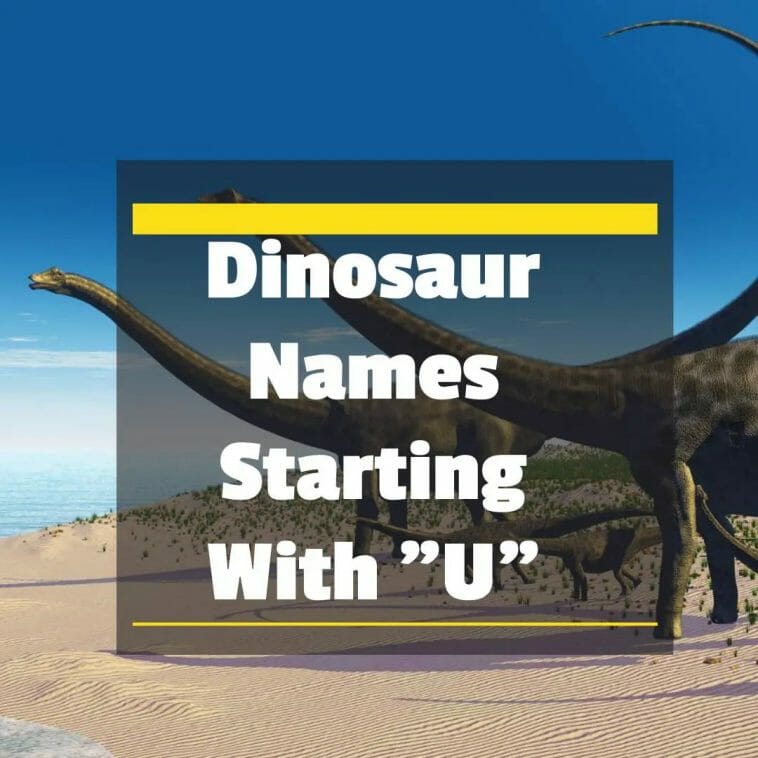 Check out the alphabetical list of dinosaur names beginning with the letter “U”. We’ll look at dinosaur pictures and discuss what their names mean, as well as learn more about dinosaur facts.

Dinosaurs with names that begin with the letter “U”

Contents for Dinosaur Names that Start with “U”

Udanoceratops is a huge member of the Leptoceratopsidae that lived in present-day Mongolia during the late Cretaceous period.

The dinosaur was discovered in the Udan-Sayr area, hence the name Udanoceratops. The Greek word ceratops means “horned face” or “horned face.” Tschizhovi is named after the Russian palaeontologist who discovered his fossils.

Ulughbegsaurus was a late Carcharodontosaurus that existed in what is now Uzbekistan during the Late Cretaceous period.

The generic name Ulughbegsaurus is derived from Sultan Ulugh Beg, a Central Asian astronomer and mathematician from the 15th century, and the Greek sauros (“reptile”, “lizard”). Uzbekistan is mentioned in the genre epithet.

Unaysaurus was a herbivorous dinosaur that lived around 227-220 million years ago in what is now Brazil.

The name Unaysaurus is derived from the Indian (Brazilian tribe of Tupy) term unay, which means “black water,” and the Greek word sauros, which means “lizard.” The genre name honours Mr. Tolentino Flores Marafiga, who discovered the dinosaur’s remains. 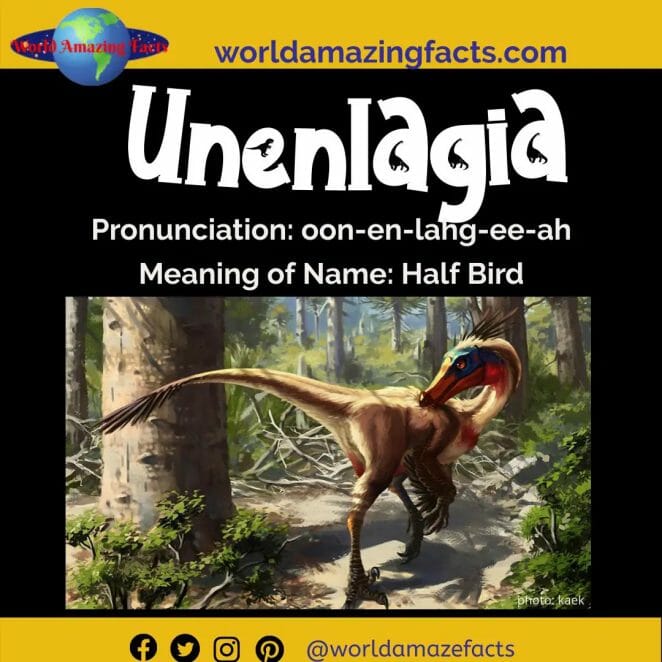 Unenlagia was a theropod that lived in Argentina during the Late Cretaceous period. 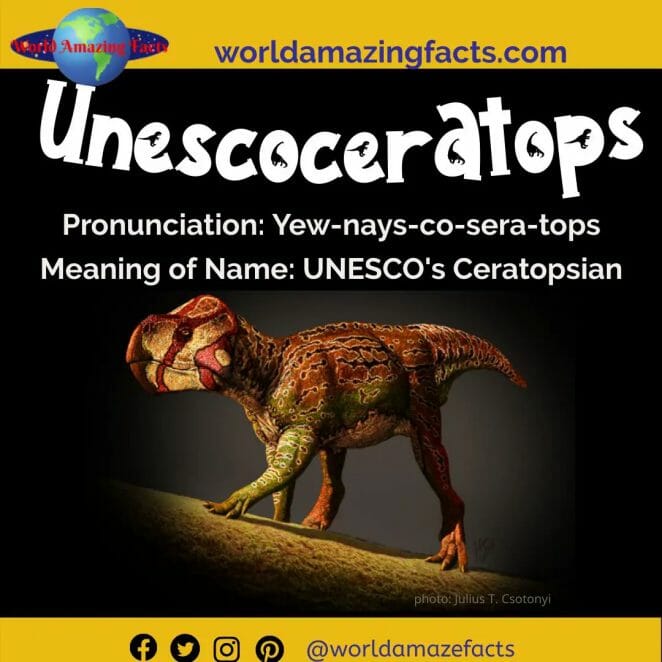 Unescoceratops is a leptoceratopsid ceratops from the Late Cretaceous period. It lived in what is now southern Canada, in Alberta.

The generic name Unescoceratops means “UNESCO’s horned face” and relates to the holotype’s locality, which is a UNESCO World Heritage Site, Dinosaur Provincial Park in Alberta. Eva B. Koppelhus is honoured with the species epithet koppelhusae for her contributions to vertebrate palaeontology and palynology (the study of plant pollen).

Unquillosaurus was a carnivorous dinosaur that existed in South America during the late Cretaceous period.

Unquillosaurus translates as “the lizard of the Unquillo River,” which is where the animal’s remains were discovered. In addition, the genre name refers to a site, El Ceibal.

Urbacodon is a tiny theropod from the Troodontid family discovered in Late Cretaceous Uzbekistan. Urbacodon’s nearest relatives were presumably Byronosaurus from Mongolia and Xixiasaurus from China, which were comparable in structure and size but did not constitute a clade, according to Averianov & Sues (2016). A team of palaeontologists led by Alexander Averianow and Hans-Dieter Sues uncovered Urbakodon fossils in 2004, and named and described them in 2007.

Urbacodon is a combination of the acronym URBAC (from the names of the five countries represented on the multinational expedition) and the Greek word odon, which means “tooth.” The genre epithet alludes to the holotype’s locality.

The generic name Utahceratops is a combination of the words Utah (the state where its fossil material was discovered) and the Greek ceratops. The whole name translates to “Utah horned face.” The genre name Gettyi honours Utahceratops discoverer Mike Getty. 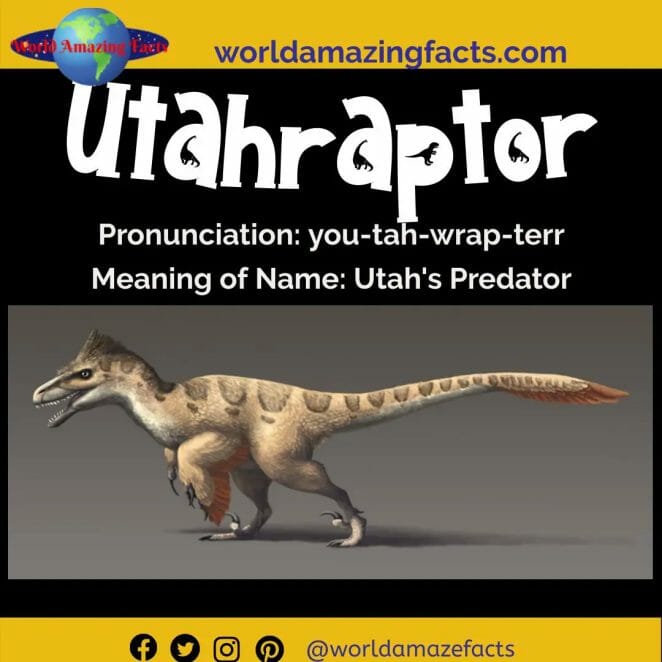 Utahraptor was a Dromaeosauridae family theropod of modest size. On the basis of fossils unearthed at Dalton Wells, Utah, James Kirkland, Robert Gaston, and Donald Burge described this dinosaur in 1993. This site is part of the Cedar Mountain Formation’s bottom section (Yellow Cat link) and is Early Cretaceous in age.

Utahraptor is a species epithet that meaning “robber (hunter) from Utah” and honours palaeontologist John Ostorm, the discoverer of Deinonychus, and Chris Mays, the head of Dinamation International Corporation, who oversaw the study in Dalton Wells.

Uteodon is a primitive iguanodont that lived in the late Jurassic period in Utah, United States. Uteodon bones were discovered in the famed Morrison Formation, which is best known for the many late Jurassic sauropod fossils unearthed in its strata, including Apatosaurus and Camarasaurus.

The generic name Uteodon is made up of two words:
Native Americans known as Utes live in Northeast Utah (today’s Uintah County) near Dinosaur National Monument, an American national monument. Odon, in turn, means “tooth” in Greek, hence the name translates to “tooth from Ute.” The species name aphanoecetes is a combination of the Greek words aphanoe (hidden) and cetes (to live).