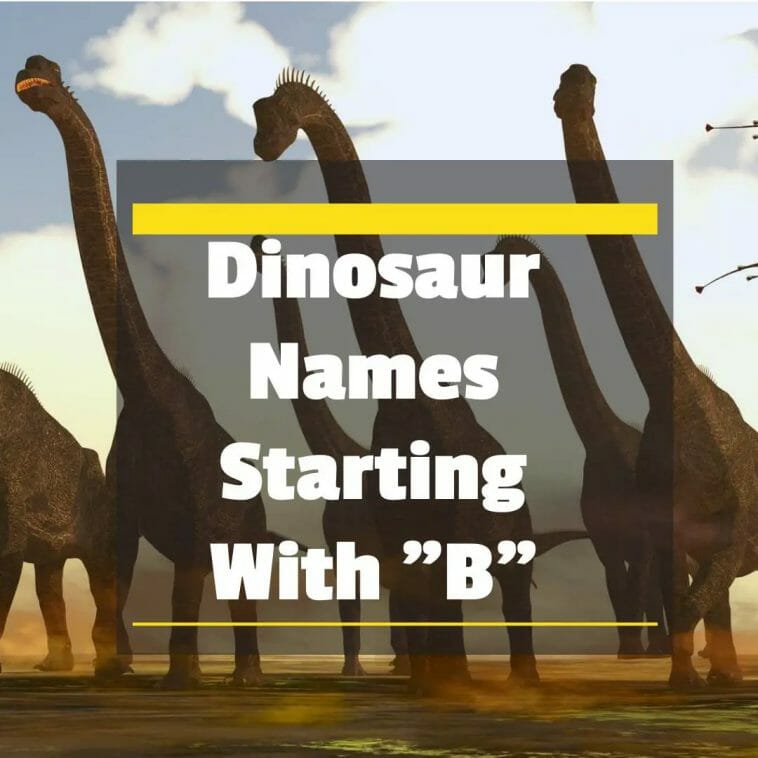 Check out the alphabetical list of dinosaur names beginning with the letter “B.” We’ll look at dinosaur pictures and discuss what their names mean, as well as learn more about dinosaur facts.

Dinosaurs with names that begin with the letter “B”

Contents for Dinosaur Names that Start with “B” 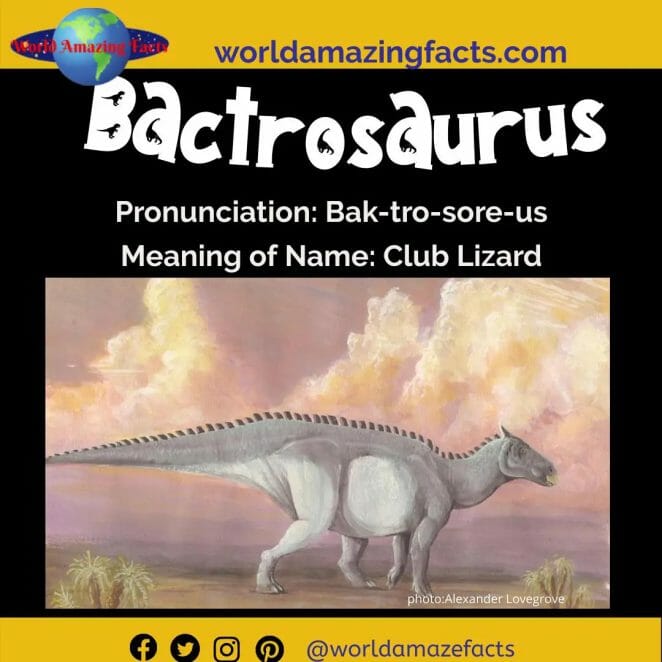 Bactrosaurus is a kind of medium-sized herbivorous dinosaur belonging to the Hadrosauroidea group that lived in modern-day China during the late Cretaceous period.

The name Bactrosaurus means “lizard with a club-shaped head.” It derives from the Greek words bactron (“club”, “stick”, “rod”) and sauros (“reptile”, “lizard”). This refers to the vertebrae’s tall, hefty, club-shaped spinous protrusions. It is also important to note that this name is frequently rendered wrongly as “the lizard of Bactria.” 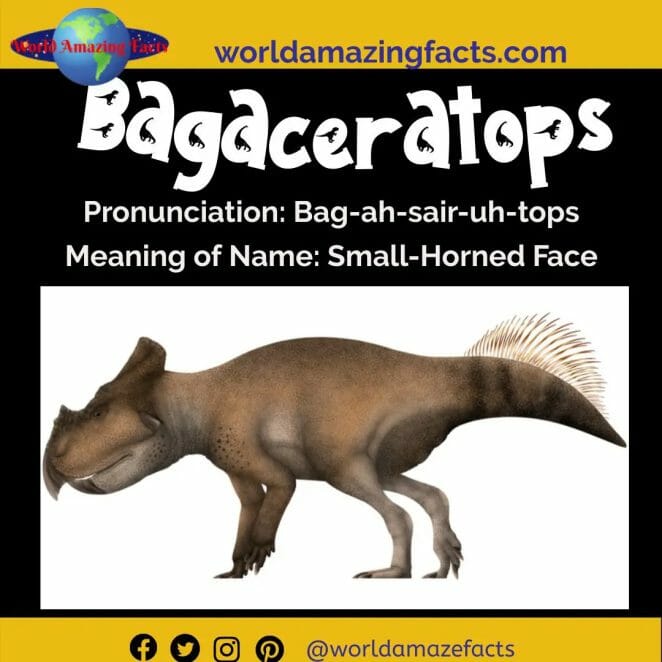 Bagaceratops is a small-horned dinosaur (Ceratops) that is closely related to Protoceratops. Bagaceratops lived in the Gobi Desert, Mongolia, and China during the late Cretaceous period. Bagaceratops was described in 1975 based on fossils found by Teresa Maryaska and Halszka Osmólska during the Polish-Mongolian Paleontological Expeditions. 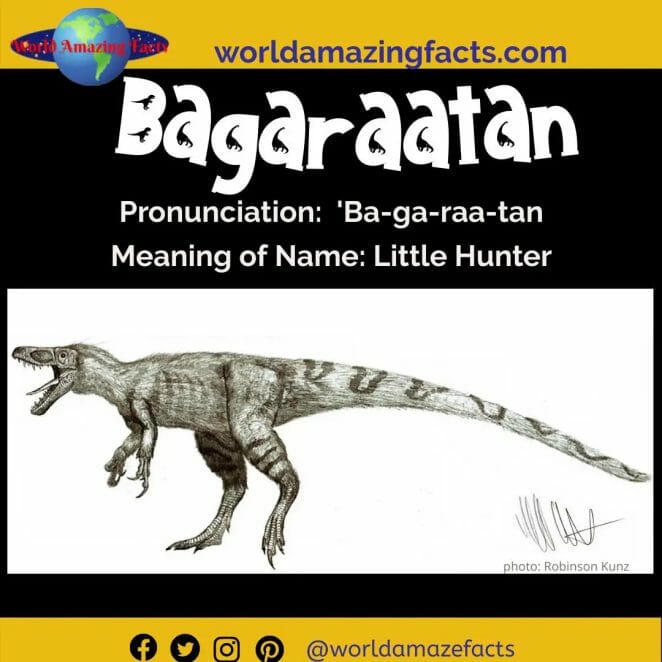 Bagaraatan had a tiny, thin skull and was a small theropod. It was discovered in what is now Mongolia, where it existed during the late Cretaceous period about 75 million years ago. The dinosaur’s generic name means “little hunter,” while the species name commemorates John Ostrom. 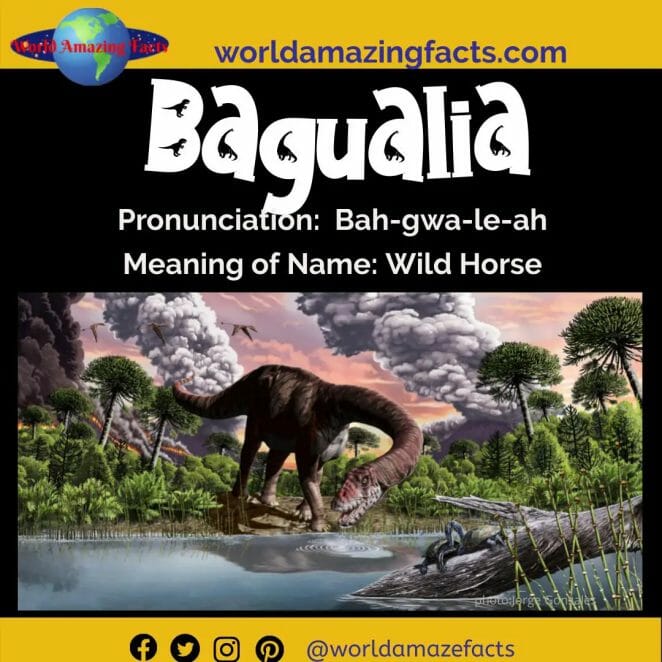 Bagualia was a type of early sauropod that lived in Argentina during the Early Jurassic period. Diego Pola and colleagues first described it in 2020.
Bagualia gets its name from the location of the remains, Bagual Canyon, and the term bagual means “wild horse” in Spanish. The species name means “early,” and it relates to the baguette’s geological age. 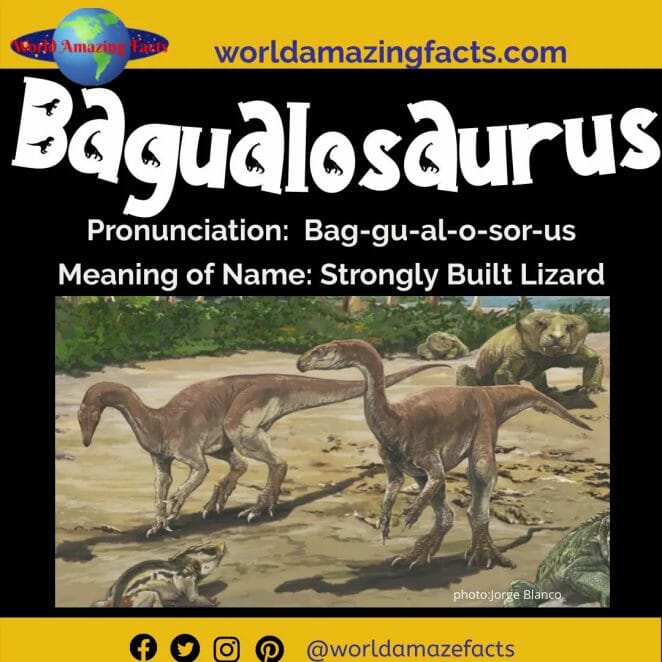 Bagualosaurus was the name of one of the world’s earliest sauropodomorphs. It was discovered in Brazil. Flávia Pretto, Max Langer, and Cesar Schultz named it in 2018. Bagual is a powerful / valiant guy or an animal in southern Brazil. The second half of the name alludes to the city of Agudo, where this dinosaur was discovered. 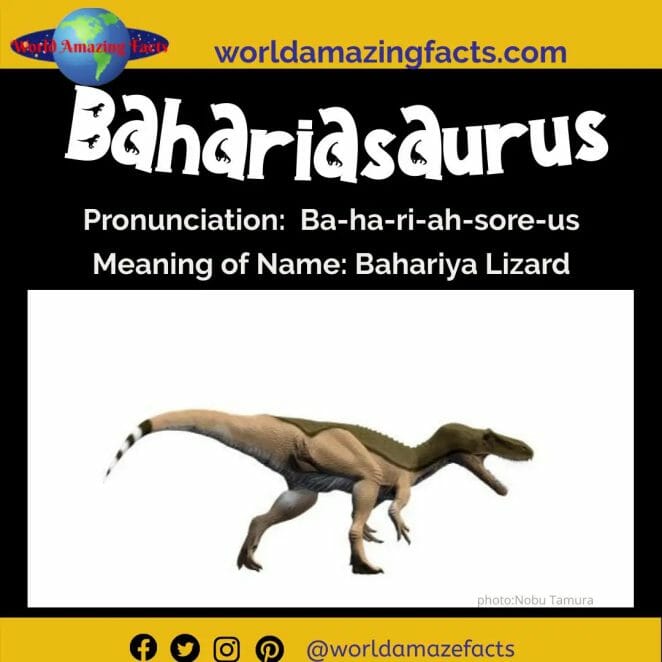 Bahariasaurus is a big, enigmatic theropod that lived in early Cretaceous Africa. The German naturalist Ernst Stromer von Reichenbach described this carnivorous dinosaur in 1934 and named it after an Egyptian location. 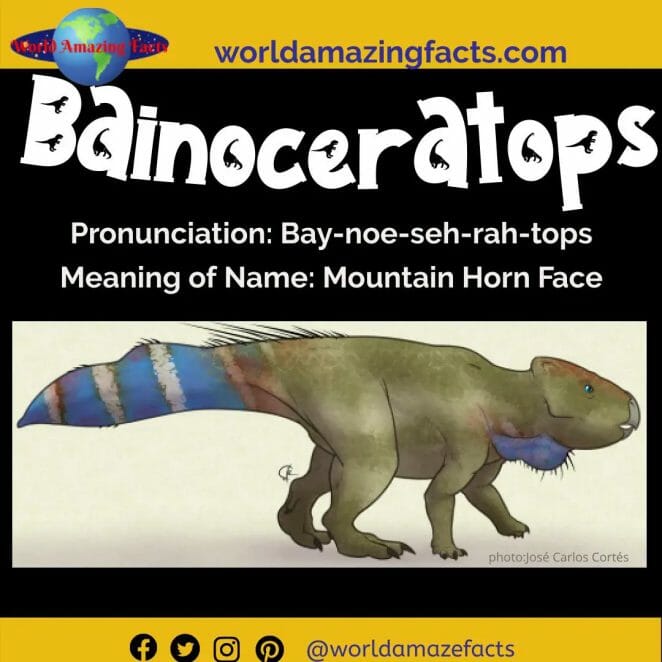 Bainoceratops is a generic name that means “horned face of Bain (Bayan Zag)” and refers to the Bayan Zag site where its remains were discovered. Ivan Jefriemov, a Soviet palaeontologist, is honoured with the species name efremovi. 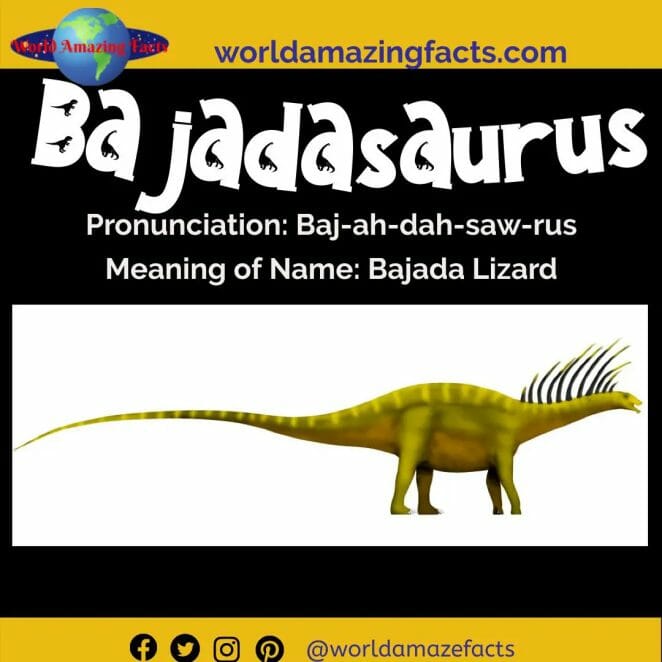 The Bajadasaurus is a medium-sized sauropod from the Dicraeosauridae family that lived in Argentina during the early Cretaceous period. Its fossil material comprises the most complete cranium of any member of this family known to science.

The name Bajadasaurus derives from the location of the fossils, which were discovered in Argentina’s Neuquen region. The species name pronuspinax is derived from the Latin words pronus (“forward leaning”) and spinax (“spike”), which relate to the cervical vertebrae’s unique spinous projections.

Bainoceratops is a generic name that means “horned face of Bain (Bayan Zag)” and refers to the Bayan Zag site where its remains were discovered. Ivan Jefriemov, a Soviet palaeontologist, is honoured with the species name efremovi. 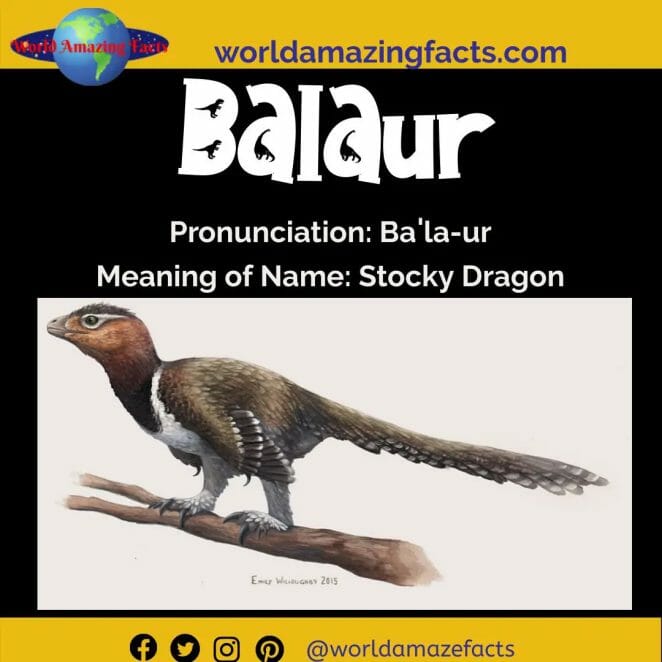 Balaur is a notable eumaniraptor that existed in what is now Romania during the late Cretaceous epoch. Balaur is the best-known non-avian theropod from the last 60 million years of Europe’s Mesozoic period.

Balauri is an ancient Romanian term for the fabled dragon-like snake, and it is frequently used as a synonym for “dragon” in modern Romanian. The origin of this word is complicated: dragons are typically malevolent creatures in Romanian mythology, but “balaur” is a strange changed serpent with a more ambiguous nature.

According to local folklore, the birth of a “balaur” is a rare occurrence: “at some point, especially during mating season, several snakes congregate in a remote spot.” They attack each other, spewing out balls of foam that combine to form “priceless stone” (sometimes equated with a diamond). This gathering of snakes is commonly referred to as the “boiling” of the stone. One of the snakes (the most cunning,celurosaurus) was named after the classic association of dinosaurs (particularly theropods) with dragons and similar creatures, and because the balaur is a mythical creature with features of both reptiles (snake) and birds (wings) – “winged reptile”, others a representative of the Paraves – the group that includes the Balaur.

Bondoc is a Romanian folklore term for a clumsy, chubby creature (human or animal). The term (bunduk) is Turkish in origin and meaning “little ball.” This term relates to the animal’s modest size and autopotmorphic massiveness (owing to the broad pelvis and expanded mass of the thigh extensor) as well as the authors’ biogeographic links with Asia (like the original Turkish word). 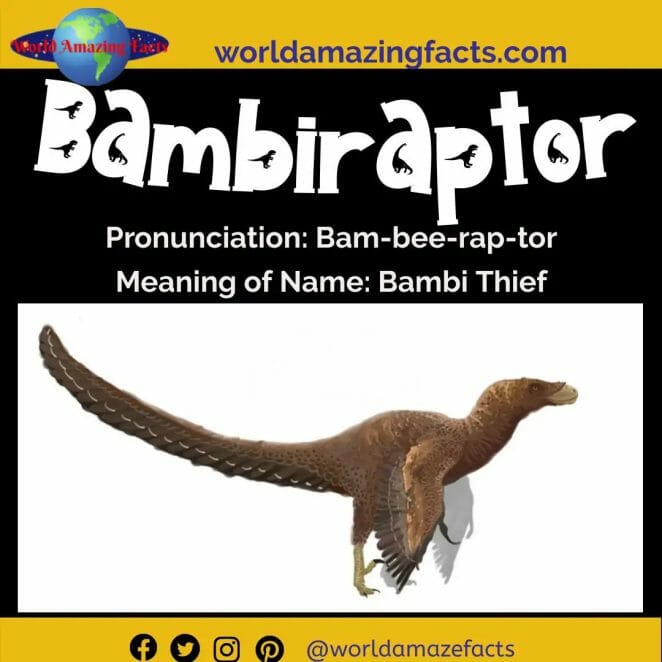 Bambiraptor was a small, light-bodied theropod that lived in North America during the end of the Cretaceous period. The finding of a bambiraptor gives new information on dromeosaurids. The Bambiraptor had long arms and a strong sternum. Some believe it’s a young Saurornitholestes or a close related. Others believe the Bambiraptor, along with the Hesperonychus, is the last member of the Microraptoria lineage and the second North American member of the group.

Bambiraptor is named after a Disney fairy tale character (the Bambi deer, whose name was later dubbed a holotype), and the genre epithet acknowledges Michael and Feinberg, who recognised the significance of the discovery and funded the fossil study. 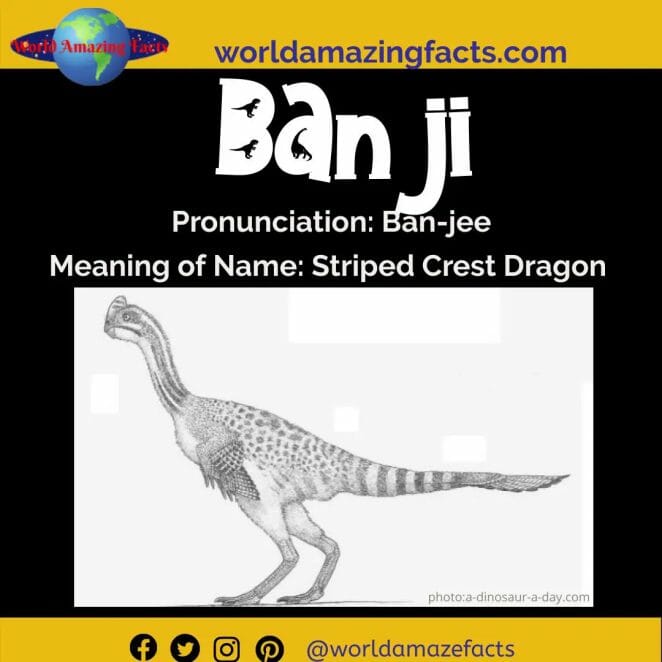 Banji is an oviraptorosaurus genus from China’s late Cretaceous epoch. Xu Xing and Han Feng-Lu, two palaeontologists, described Banji in 2010. Banji was most likely a primitive member of his family, yet the young age of the only known specimen likely influenced Banji’s place in phylogenetic analyses.

The name Banji is derived from the Chinese terms ban and ji, which indicate “patch” or “strip” and “comb” respectively. Long means “dragon” in the genre. As a result, the entire thing can be interpreted as “striped crest dragon.” The name alludes to the look of the crest on Banji’s head, which is ornamented with distinctive stripes. 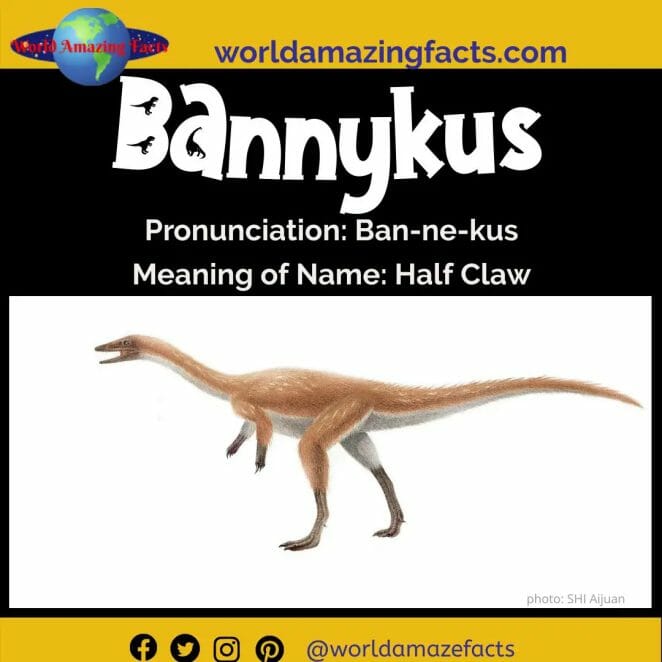 Bannykus is a tiny theropod of the Alvarezsauroidea group whose fossils were discovered in modern-day China. The discovery of Bannykus, along with the related Xiyunykus, filled a 70-million-year-old gap in theropod fossil record. Until now, only rudimentary late Jurassic alwarezzauroids and advanced late Cretaceous alwarezzauroids were known.

The name Bannykus is derived from the Mandarin term Ban, which means “half,” and the Greek word onyx (“claw”). Thus, it refers to the transitional characteristics noticed in this species. The species name wulatensis is derived from the Chinese administrative unit Wulatehouqi. 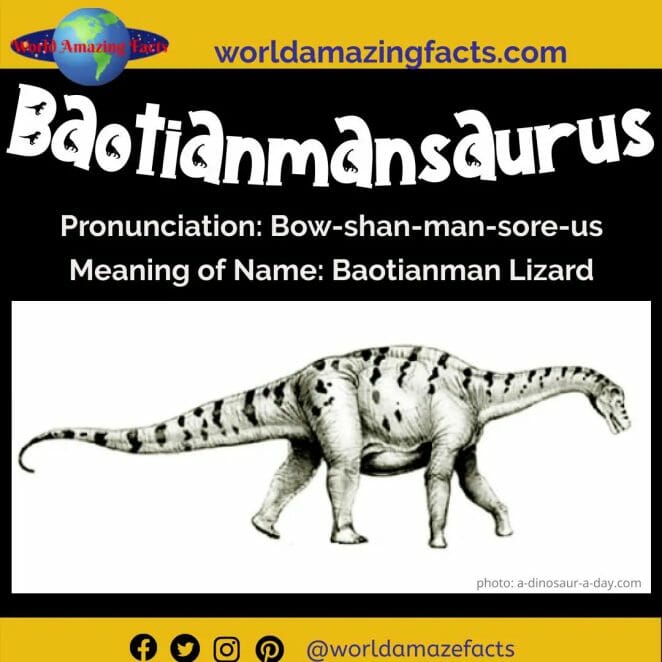 Baotianmansaurus was a sauropod that existed in what is now China during the late Cretaceous period. Zhang et al. described it in 2009. 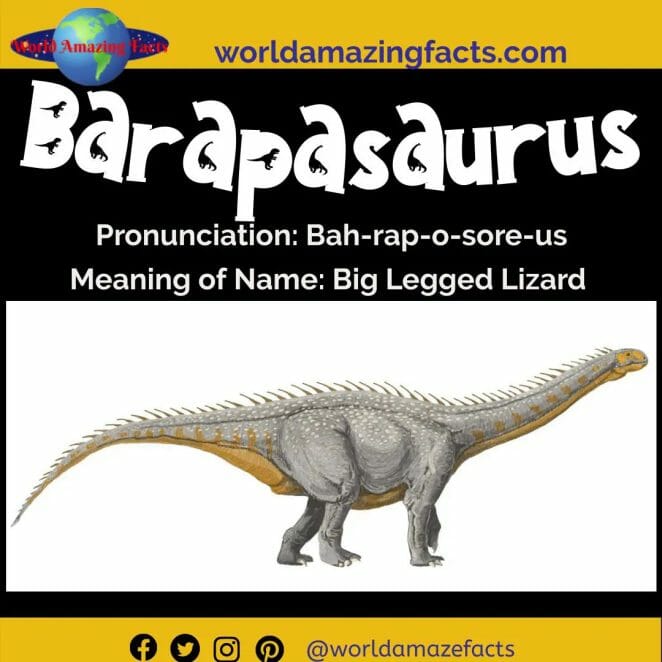 Barapasaurus was a prehistoric sauropod that lived between 196 and 183 million years ago in what is now India. It wasn’t until 1975 that Barapasaurus was described for the first time.

Bara signifies great in numerous Indian languages, and p denotes leg. Saurus, on the other hand, is derived from Greek and meaning “lizard.” In a nutshell, the word Barapasaurus means “big-legged lizard.” This refers to the dinosaur’s massive femur, which is nearly 1.5 metres long. The second part of its scientific name, tagorei, honours Rabindranath Tagore, one of India’s most famous poets. 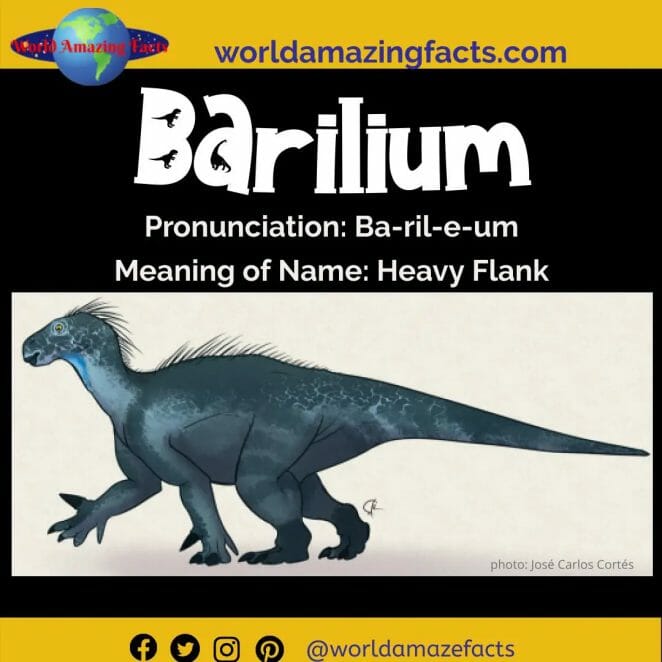 Barilium is an ornithopod genus in the Iguanodontia family. Barilium lived in what is now Europe during the early Cretaceous period. The strata from which the Barilium bones were collected are thought to be between 138 and 137 million years old (Norman, 2013).

David Norman called the holotype specimen Barilium, while Kenneth Carpenter and Yusuke Ishida named it Torilion. Because Norman’s work was published first, Barilium has priority under international laws governing animal names. Carpenter and Ishida described a second genus, Sellacoxa, from another hip, although Norman claims it is a new species of Barilium. 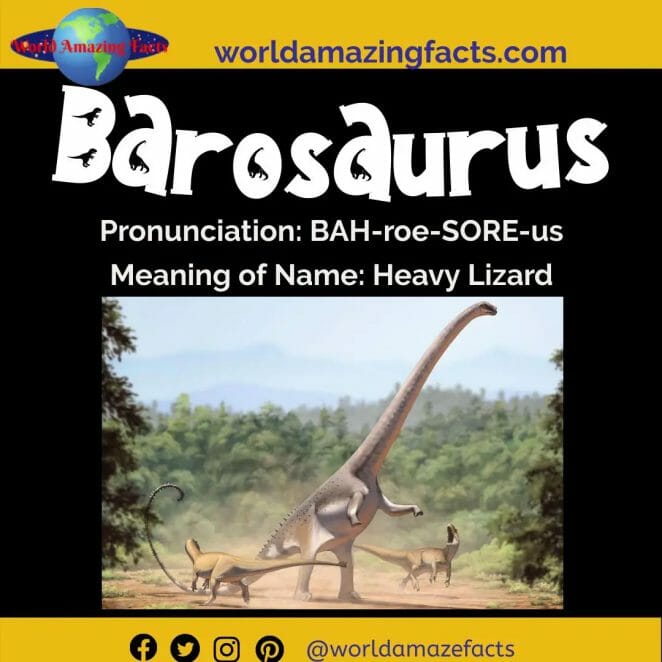 Barosaurus is a Late Jurassic Advanced Diplodocus that lived in what is now the United States. 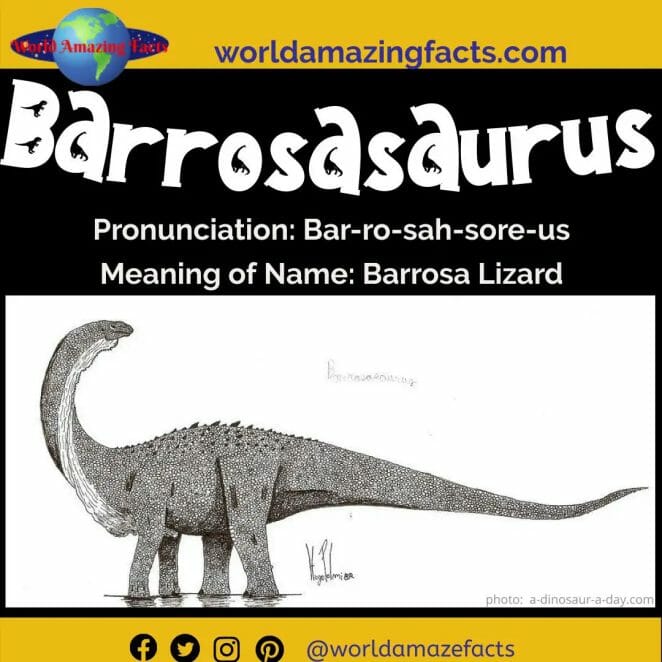 Barrosasaurus was a titanosaur sauropod that lived in northern Patagonia (today’s central Argentina) during the Late Cretaceous period. The Barrosasaurus, like all Sauropods, was a four-legged herbivore with a long neck. It most likely ate high-growing plants. Perhaps Barrosasaurus was eaten by theropods like Abelisaurus, which lived in Argentina at the time.

The genus name Barrosasaurus comes from the phrase “Sierra Barrosa lizard,” which is where it was discovered. Rodolfo Casamiquela (1932 – 2008) is honoured with the genre epithet for his contribution to the advancement of geological sciences in Argentina. 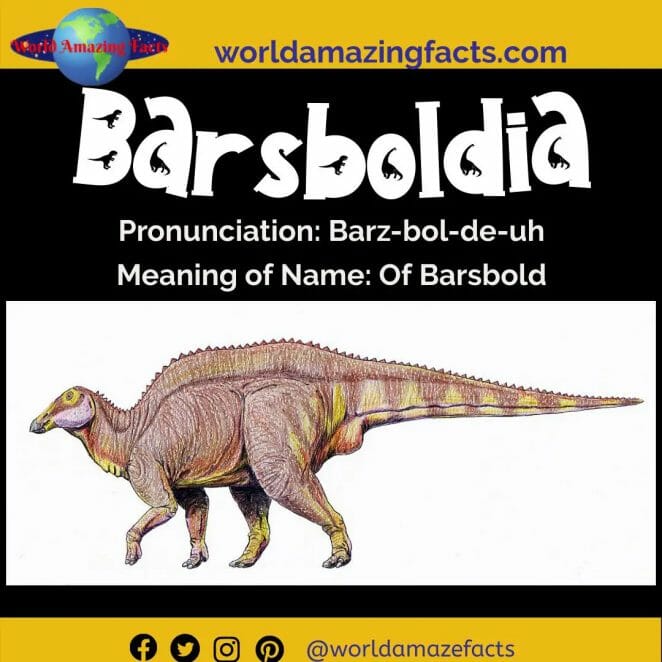 Barsboldia is named after palaeontologist Rinchen Barsbold. The generic epithet “sicinskii” was created in honour of Wojciech Siciski, who passed away in 2010. Wojciech was a longtime employee of the Institute of Paleobiology of the Polish Academy of Sciences, custodian of the fossil vertebrate collection, who participated in palaeontological expeditions to the Gobi Desert and dissected the barboldia holotype.