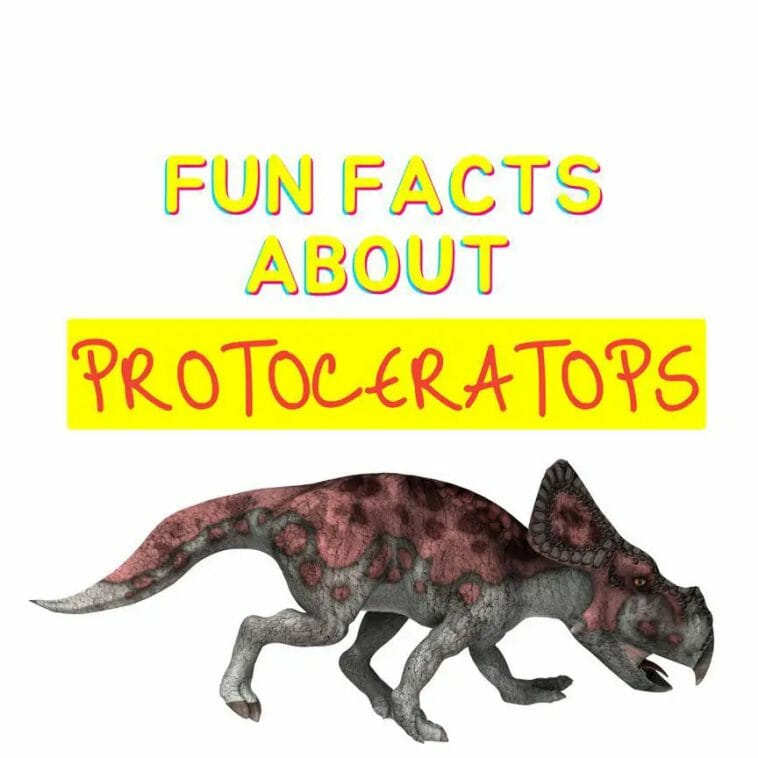 The Protoceratops, a member of the ceratopsian (horned dinosaur) family, roamed arid areas of Central Asia until the Late Cretaceous period, roughly 75 million to 71 million years ago, in what is now the Bayan Mandahu and Djadokhta formations.

Contents for Fun Facts about Protoceratops

Protoceratops was a ceratopsian dinosaur that was around the size of a pig or a sheep. The Protoceratops had a huge head with a protective shield or frill at the back of the neck that it used to defend itself. Its snout looked like a rhinoceros’. Despite the fact that it belonged to the horned dinosaur family, it lacked a horn.

Procreators’ jaws were particularly muscular and capable of locking down tightly. It possessed teeth for devouring vegetation in the area. The Protoceratops’ hind legs were longer than its forelegs, giving it a bent appearance. As a result, it was able to dig into the ground with its front feet while remaining upright with the assistance of its rear feet. It was able to manoeuvre about using all four of its feet.

3: What does the name Protoceratops mean?

Protoceratops is a generic name that means “first horned face,” as it was thought that Protoceratops was an early ancestor of ceratopsids.

4: How do you pronounce ‘Protoceratops’?

5: What did Protoceratops eat?

Proceratops were herbivorous ceratopsians with tooth-filled beaked snouts that fed on period vegetation. Due to their small size, they most likely grazed on newly growing plants, with later species feeding on early grasses when they arose around the end of the Cretaceous epoch.

Herbivore dinosaurs relied heavily on horsetails for nutrition. Aside from horsetails, Proceratops ate other plants (angiosperms) that were around during the late Cretaceous. In part, the huge number of dinosaurs during the age of dinosaurs was caused by the development of angiosperms at the end of the Jurassic Period.

In 1922, Protoceratops fossils were discovered in Mongolia’s Gobi Desert. The first Protoceratops specimen was discovered in the Gobi desert by photographer James B. Shackelford. Expeditions undertaken by Roy Chapman Andrews recovered a wide range of species. Velociraptor, Oviraptor, and the ceratopsid Psittacosaurus were among them.

7: Where did Protoceratops live?

The majority of these dinosaurs’ fossilised remains were discovered in Asia, specifically in Mongolia, the Gobi Desert, and other parts of central Asia. This region was part of the Pangaea supercontinent during the Cretaceous epoch (145 to 66 million years ago).

8: What kind of climate did Protoceratops inhabit?

During the Cretaceous Period, Protoceratops roamed the Pangaea supercontinent, a time when continents were beginning to separate. The climate during the early Cretaceous was characterised by high temperatures and high levels of humidity. In the beginning, there wouldn’t have been much of a difference between seasons and there wouldn’t have been any ice in the polar regions.

Protoceratops lived during a period of cataclysmic change, during which time new mountain ranges were being constructed and temperatures were finally beginning to decrease. The seasonal shifts would have been more pronounced as the continental plates continued to drift apart and diverge from one another.

9: What was Protoceratops’s height and weight?

10: How many eggs did Protoceratops lay?

Protoceratops was likely a herder, similar to other ceratopsians. This notion is backed by the discovery of bone beds, massive deposits of the same species’ bones in a region, and numerous nesting colonies. Each nest included at least twelve eggs set spirally.

11: How did the Protoceratops protect itself?

Protoceratops is known for its bony neck frill, which Protoceratops may have used to protect itself from predators.

12: How did Protoceratops walk?

Protoceratops was a quadrupedal dinosaur having stronger hind limbs than forelimbs, which contributed to the back’s distinctive arch. The front of Protoceratops moved low to the ground, but its frill defended its neck from larger aggressors approaching from above.

13: How fast can Protoceratops run?

Protoceratops had four short legs and was a slow-moving dinosaur. Dinosaur speeds are calculated based on their morphology (such as limb length and estimated body mass) and preserved trackways. As a result, it likely ran no faster than 10 mph.

14: Why is the finding of Protoceratops significant?

Protoceratops was the earliest dinosaur discovered, and it was known through all stages of life until its extinction at the End-Cretaceous event, which resulted in the extinction of the dinosaur species. Scientists have been able to discover a great deal about the prehistoric past thanks to the presence of Ceratops, whose robust physique has allowed them to unlock numerous doors. Protoceratops is significant in the evolution of dinosaurs since it is the type species after which Ceratopsia and Ceratopsidae were named.