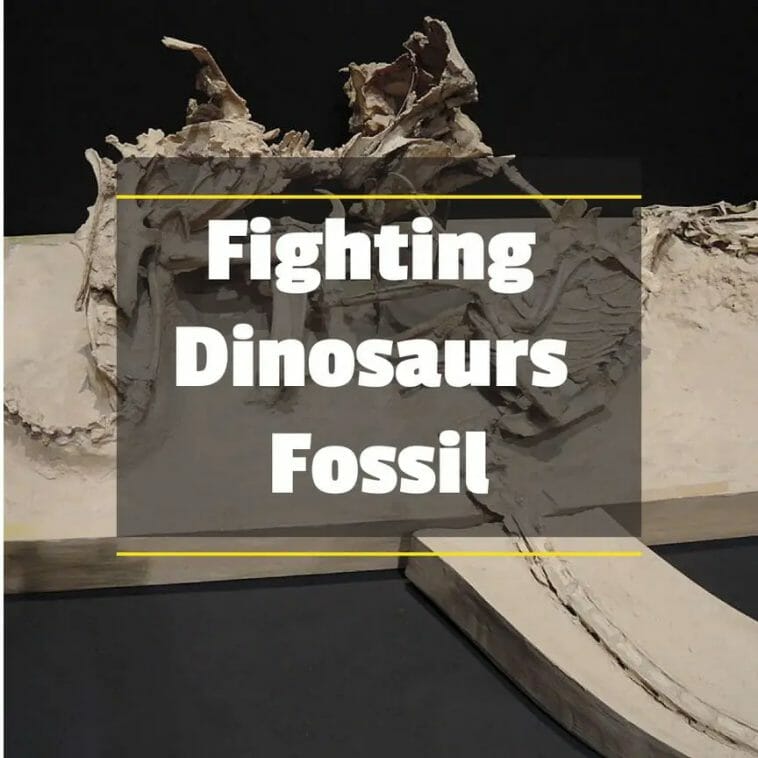 In the Gobi Desert, during the Cretaceous Period, around 80 million years ago, there was a fierce battle going on between two dinosaurs. A hungry Velociraptor drove its sharp toe-claw into a Protoceratops’ neck, while the Protoceratops bit the arm of the Velociraptor with its pointy beak. The Velociraptor was a vicious carnivore that hunted plant-eating Protoceratops and other prey species.

Mongolia’s Djadokhta Formation is the source of the renowned and scientifically significant fossil known as The Fighting Dinosaurs. This is frequently considered one of the best fossils ever discovered. It gives direct evidence of predatory behaviour in nonavian dinosaurs by preserving a Protoceratops andrewsi and Velociraptor mongoliensis caught in conflict. The specimen was discovered in 1971, and it has been the subject of great controversy as to how both creatures were preserved relatively whole and together.

The fossil was unearthed in 1971, and it has sparked significant discussion over how both creatures were maintained in such good condition. It’s impossible to know for certain what occurred. However, experts have proposed various theories based on fossil data.

What happened to these two dinosaurs that caused them to perish?

Scientists have proposed various theories based on fossil evidence, particularly a hint that they were buried alive while fighting.

In 1974, the Mongolian palaeontologist Rinchen Barsbold proposed that the quicksand-like bottom of a lake may have kept them together, or that both animals may have fallen into a swamp-like waterbody, causing the final minutes of their combat to take place underwater.

A massive dune may have collapsed simultaneously during the death struggle, burying both Protoceratops and Velociraptor, according to Polish scientist Halszka Osmólska. Alternatively, the Velociraptor may have been scavenging a dead Protoceratops before being buried and killed by an unknown event.

A scavenging hypothesis was ruled out by David M. Unwin and colleagues in 1995 since there were multiple signs of a simultaneous death. The Protoceratops stands semi-erect and has a horizontally orientated skull, which would not have been conceivable if the animal had already died. Unwin and his team also looked at the sediments around the specimen and came to the conclusion that a sandstorm or other sand-bearing event buried the pair alive.

They thought that the low-lying Velociraptor grabbed the Protoceratops and killed it with a kick. Finally, they hypothesised that Velociraptor populations may have observed Protoceratops crouching during high-energy sandstorms and exploited this behaviour for successful hunts.

Kenneth Carpenter proposed another scenario in 1998, in which the Velociraptor’s many wounds on the Protoceratops’ throat caused the latter animal to bleed to death. The Velociraptor was killed and eventually desiccated after the Protoceratops bit the predator’s right hand and trapped it under its own weight.

Scavengers tore the Protoceratops’ missing limbs off later. Finally, sand deposits covered both animals. Carpenter speculated that because the Velociraptor is quite intact, it may have been entirely or partially buried by sand. He came to the conclusion that the Fighting Dinosaurs is one of the few fossils that show non-avian theropods were carnivores, not just scavengers.

In 2016, Barsbold observed many oddities in the Protoceratops individual: both coracoids exhibit tiny bone pieces indicative of a broken pectoral girdle, and the right forelimb and scapulocoracoid are ripped to the left and backwards, relative to its body. He came to the conclusion that an external force was attempting to tear away the pectoral components and right forelimb.

Barsbold said that scavengers were probably to blame for these oddities because the Protoceratops is missing other parts of its body and this probably happened after both animals died or when they couldn’t move. Since Protoceratops is thought to have lived in groups, another theory is that members of a group tried to pull out an already-buried Protoceratops, causing its limbs to become dislocated. Barsbold, on the other hand, pointed out that there are no associated traces to back up the latter interpretation.

Which theory about the dinosaurs’ demise appears to be the most plausible?

A flash flood forced a sand dune to fall on top of the dinosaurs, resulting in their deaths by sand avalanche. A violent sandstorm may have buried these opponents, trapping them in this battle stance. It is possible for a steep sand dune to suddenly flow downhill like an avalanche when it is disturbed. Due to the fact that dinosaurs were preserved during a fierce war, this explanation is currently the most plausible.

It would have taken much too long for a sandstorm to completely bury everything. The animals would have gotten away—or would have been preserved in a running stance rather than a fighting position. And if they’d gotten stuck in quicksand, their limbs would have been saved while they desperately struggled to get to solid ground. They didn’t appear to be sinking into sand based on their body position.