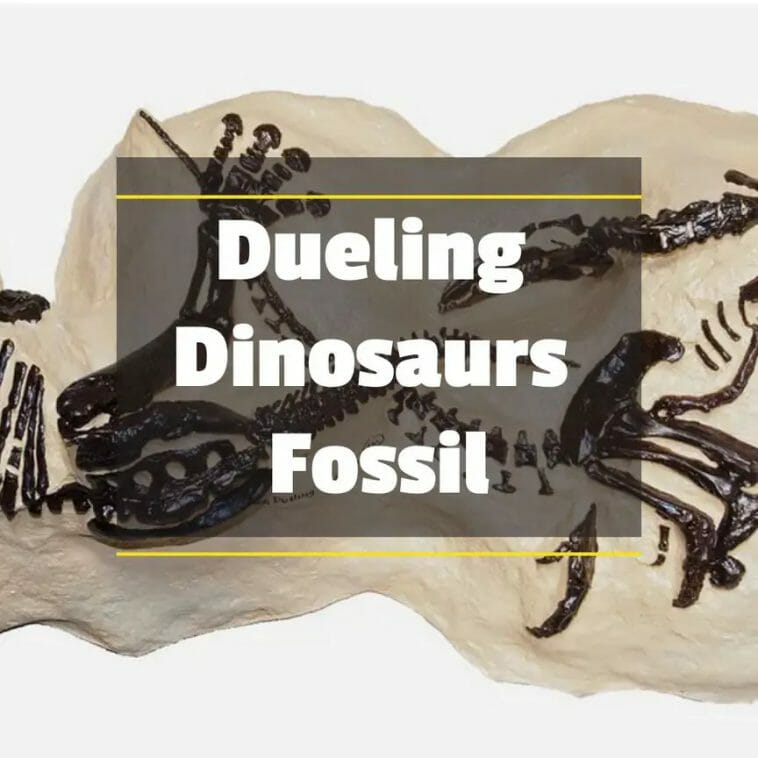 In the 67 million-year-old specimen, both a young T. rex and a Triceratops are buried together in the midst of what could have been a deadly predatory encounter. The skeletons are wonderfully preserved in their natural postures due to the nature of their burial, making the Dueling Dinosaurs a treasure trove of knowledge for palaeontologists and dino fans alike.

Why is it called Dueling Dinosaurs?

The moniker “Dueling Dinosaurs” comes from the predominant hypothesis that has been proposed to explain them: due to the close closeness of their skeletons, scientists have hypothesised that the pair may have perished in a battle. There is even evidence that the skeleton of a Triceratops contains teeth belonging to a Tyrannosaurus rex, which gives credibility to the claim.

Ranchers Clayton Phipps, Mark Eatman, and Chad O’Connor discovered the Dueling Dinosaurs specimen in Montana in 2006. Triceratops is discovered eroding from sedimentary rock of the Hell Creek Formation. The name Dueling Dinosaurs is derived from the discovery of a tyrannosaur during excavation. Tyrannosaurus rex, a 22-foot-long theropod, and Triceratops horridus, a 28-foot-long ceratopsian, were buried together 67 million years ago.

Both skeletons are carefully retrieved, secured in plaster and burlap cradles, and preserved in a secure location. The skeletons sat in labs and warehouses for years, awaiting a court struggle between ranchers and palaeontologists over their ownership. The “Dueling Dinosaurs” specimen was finally purchased for $6 million by the North Carolina Museum of Natural Sciences.

Where are Dueling Dinosaurs?

The remarkably complete skeletons of these “dueling dinosaurs” will be exhibited and researched at the North Carolina Museum of Natural Sciences, which includes the SECU DinoLab, will open to the public in 2023. For the next five years, the fossils will be cleaned and put on display for the public.