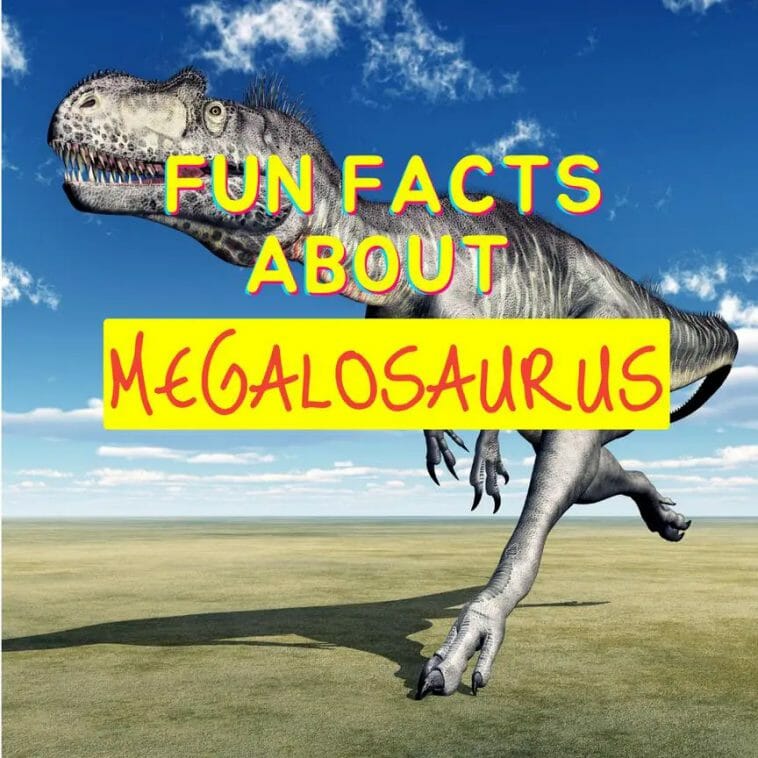 Contents for Fun Facts about Megalosaurus

The front legs had grabbing, clawed digits that functioned as hands. Both feet had three claws on each toe. This tail countered the horizontal tilt of the torso. The preserved Megalosaurus skeleton is highly ossified, suggesting that the animal was robust and muscular. The physique as a whole was hefty, as were the bones.

3: What does the name Megalosaurus mean?

4: How do you pronounce ‘Megalosaurus’?

The name Megalosaurus is pronounced ‘MEG-ah-low-sore-us.’

5: What did Megalosaurus eat?

The Megalosaurus was a bipedal top predator and carnivore that preyed on Sauropods and Stegosaurs, as well as insects, reptiles, and early mammals.

William Buckland, a palaeontologist, determined in the early 1820s that the bones belonged to gigantic reptiles. In a geological study of southeast England published in 1827, Gideon Mantell wrote about Megalosaurus and named the species Megalosaurus bucklandii after William Buckland.

7: When was the Megalosaurus first discovered?

The first Megalosaurus specimen was discovered in 1676 in Oxfordshire, England, in the Taynton Limestone Formation. Biologists at the time were baffled by the fact that it was merely a bone fragment.

8: Where did Megalosaurus live?

Megalosaurus lived in Europe during the Jurassic period. Its fossils have been discovered in Portugal, the United Kingdom, and France, among other places.

9: When was the Megalosaurus alive?

Megalosaurus dinosaurs lived approximately 170-155 million years ago, during the Bathonian epoch of the Middle Jurassic period.

10: What kind of climate did Megalosaurus inhabit?

Megalosaurus flourished in tropical and lush terrestrial settings during the Middle Jurassic period, allowing them to hunt and fight prey such as Sauropods, Stegosaurs, and early mammals. Tall trees, such as enormous sequoias and pines, would have thrived in these locations. Tree ferns, palm trees, ginkgoes, and horsetails, for example, would have grown as well.

11: What was Megalosaurus’s height and weight?

Megalosaurus was a typical theropod dinosaur with short arms and a long tail that stood on two legs. It was around 6 metres (20 feet) long and weighed about 700 kilos (1,500 lb).

12: Is the Megalosaurus bigger than a T Rex?

13: How many teeth does a Megalosaurus have?

14: How fast can Megalosaurus run?

Megalosaurus, as a carnivorous bipedal Theropod, might have travelled at speeds of up to 27 mph (43.4 kph).

15: Why is the finding of Megalosaurus significant?

Megalosaurus was the first non-avian dinosaur to be documented in scientific and paleontological journal literature. Megalosaurus was the dinosaur that started a great many things, including the science of palaeontology, the debate about whether dinosaurs should be called names that end in “saurus” even though they are not “lizards,” and a lifetime of interest in the animals that walked the Earth before we did.