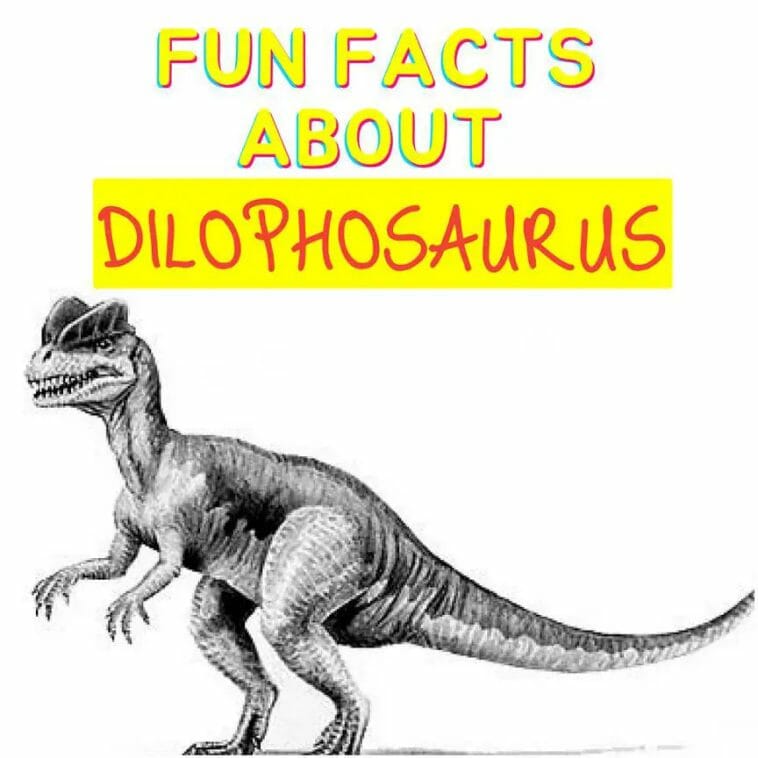 Dilophosaurus was a meat-eating dinosaur that could move quickly. A kink in its upper jaw could indicate that it ate a certain type of food or that it attacked by grasping and holding victims. Dilophosaurus has been studied many times throughout the years and classified into nine different theropod groups.

In the 1993 film “Jurassic Park,” the frilled-neck dinosaur spits venom. Thanks to director Steven Spielberg, every moviegoer is undoubtedly familiar with this species. It was made popular by Steven Spielberg’s portrayal of it as a cute, curious, shorter-than-human dinosaur with huge neck frills that could murder people by shooting venom into their eyes. While the scene is iconic, the Dilophosaurus representation is far from accurate.

Contents for Fun Facts about Dilophosaurus

The rounded crests on the Dilophosaurus’ skull were its most distinctive characteristic. These adorned a considerable portion of its head and were thought to be purely decorative. They were far too delicate to be utilised as weapons.

3: What does the name Dilophosaurus mean?

4: How do you pronounce ‘Dilophosaurus’?

The pronunciation of Dilophosaurus is die-LOAF-oh-sore-us.’

5: What is the nickname of Dilophosaurus?

6: What did Dilophosaurus eat?

The Dilophosaurus was a meat eater. Because of the jaw configuration, hunting would have been difficult for them. They only hunted little preys with their clawed limbs and legs. It’s possible that this theropod ate any meat it could find, as well as smaller lizards, fish and carnivores that didn’t require much jaw power to capture and kill.

In 1940, Jesse Williams, a Navajo, discovered the first Dilophosaurus specimens on Navajo Nation territory in Tuba City, Arizona. Williams first brought the fossils to palaeontologists at the University of California, Berkeley in 1942, including Samuel Welles, who described the species in 1954.

8: Was Dilophosaurus an apex predator?

Paleontologists believe Dilophosaurus was the top predator instead of a scavenger with small jaws in the ecology at the time. Dilophosaurus may have lived with other Theropods later in its history, but in the early Jurassic, it was one of the largest Theropods around.

9: Where was Dilophosaurus found?

Dilophosaurus existed 193 million years ago in what is now Arizona and Utah, on the western side of the North American continent, which was divided by sea. Following the discovery of a probable specimen in Yunnan Province in 1987, some scientists believe that Dilophosaurus also lived in China.

10: What kind of climate did Dilophosaurus inhabit?

The Dilophosaurus lived in an area with many rivers, streams, and other water supplies. Its surroundings most likely had a lot of rain.

11: What was Dilophosaurus’s height and weight?

An adult Dilophosaurus weighed 650-1000 pounds and measured 6 metres in length, with the tail and neck taking up most of that.

This dinosaur would be roughly half the size of a full-grown T. rex, but with a long and muscular tail. The dinosaur had medium-sized arms and long fingers, with one prominent finger terminating in a claw.

12: Did the Dilophosaurus spit poison?

13: How did the Dilophosaurus hunt and eat?

The Dilophosaurus was a bipedal, energetic dinosaur. They moved quickly, which was beneficial for hunting. Their forelimbs are powerful and flexible, allowing them to attack and defend. They could grab and cut their opponent’s throat with their muscular hands. They can also bounce when fighting an adversary on their tail. Their upper jaw has a kink that allows them to grab or hold prey.

14: How did Dilophosaurus move?

15: How many Dilophosaurus have been found?

16: How fast can Dilophosaurus run?

Dilophosaurus was a bipedal predator with a twin crest on its head that moved quickly. According to current estimates, this dinosaur could reach speeds of up to 30 miles per hour.

17: Why is the finding of Dilophosaurus significant?

While palaeontologists know very little about Dilophosaurus because of the few specimens that have been discovered so far, there are many things this species can reveal to them.

As one of the first and biggest theropods to show up in the early Jurassic, this member of the Dilophosauridae family gives scientists a way to track how theropods changed up until they died out at the end of the Cretaceous period. Dilophosaurus might also be able to tell us important things about how birds evolved from dinosaurs.