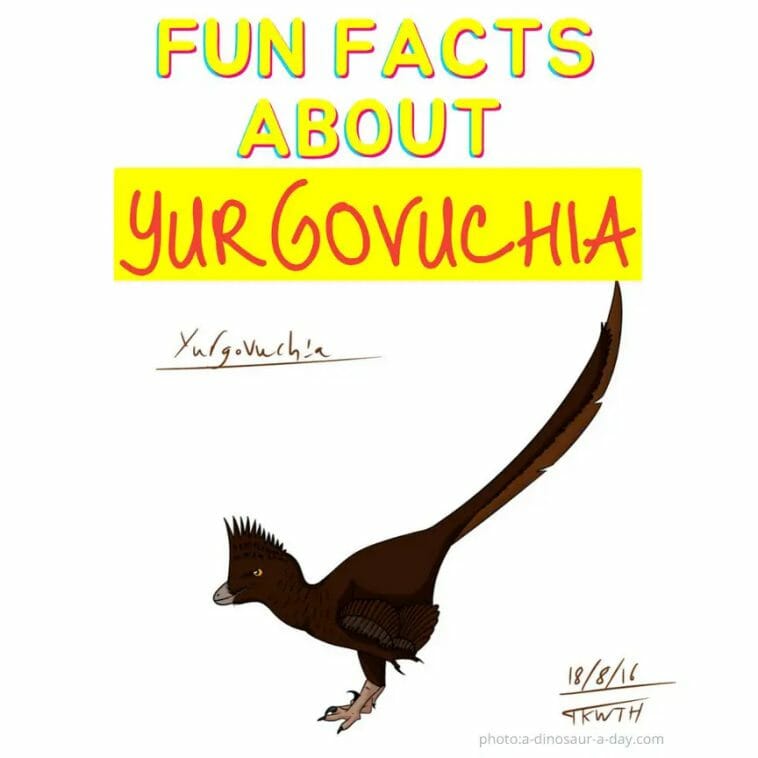 Yurgovuchia takes its genus name from ” Yurgovuch “, a Ute Indian word for coyote. These wolf-like hunters, which were around the same size as Yurgovuchia but barely half the length, were fairly widespread in the area.

Yurgovuchia may have been a direct progenitor of the giant dromaosaur Utahraptor, according to research. Utahraptor was a big birdlike dinosaur, about the size of a modern grizzly bear. The smallest known raptors, such as the four-winged Microraptor, were only the size of a thrush.

The fossils of Yurgovuchia doellingi were discovered in 2005 by a research team led by American palaeontologist Phil Senter in the Cedar Mountain Formation of Utah, where sections of the spine and pelvis were excavated.

The researchers also uncovered the fossilised bones of two more carnivorous dinosaur species nearby. Yurgovuchia appears to be part of a Dromaeosauridae trend in which the flexibility of the tail increased as the body size of these predatory dinosaurs rose.

Find out more facts about Yurgovuchia.

Contents for Fun Facts about Yurgovuchia

2: How do you pronounce ‘Yurgovuchia’?

3: What does the name Yurgovuchia mean?

Yurgovuchia is derived from the Ute word yurgovuch, which means coyote, a predator of comparable size to Y. doellingi, which currently resides in the same region.

The specific name, doellingi, honours the geologist Helmut Doelling for his more than 50 years of geological investigation and mapping of Utah for the Utah Geological Survey and for his role in the identification of the Doelling’s Bowl dinosaur sites, where Y. doellingi was collected.

The postcranial remains of a single species, which has been given the name Yurgovuchia doellingi, are all that have been found to represent the Yurgovuchia. The holotype consists of the cervical, dorsal, and caudal vertebrae in addition to the proximal end of the left pubic bone. All of Yurgovuchia’s preserved vertebrae have sutures that have hardened over time. This shows that it was an adult when it died.

Using particular traits, they may be distinguished from other dromaeosaurids. One pneumatophore was located on either side of their axial centrum. The pubis lacked a pubic tubercle, and the caudal prezygapophyses were stretched toward the transition point. The cranial faces of the caudal vertebrae are rounded, and the third cervical vertebra does not have a bevelled edge.