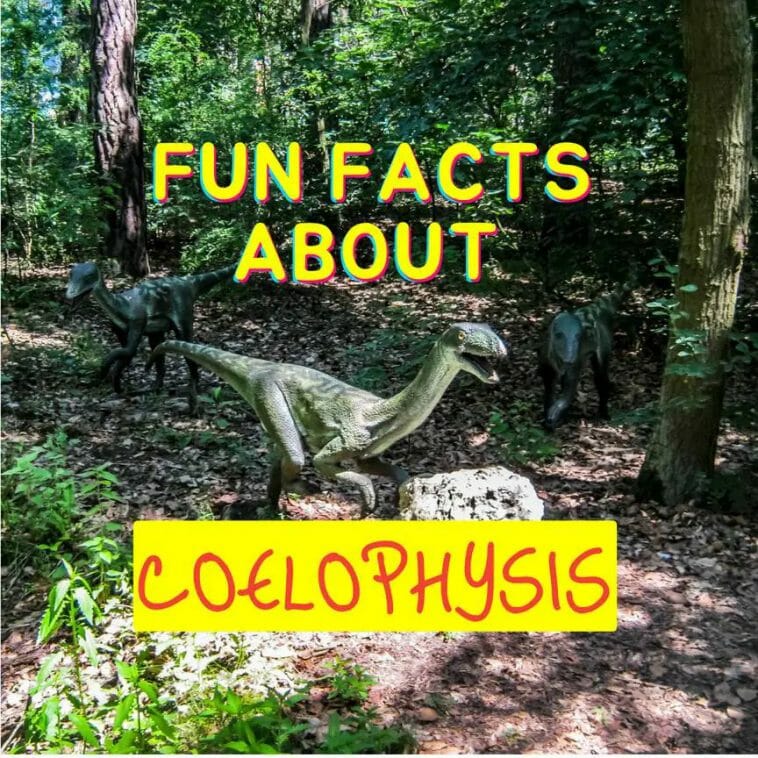 Coelophysis was one of the first dinosaur genera, existing between 190 and 225 million years ago during the Late Triassic Period. Coelophysis was a bipedal carnivore that grew up to 3 m (9.8 ft) in length and was a small, slenderly constructed ground dweller.

Contents for Fun Facts about Coelophysis

2: What does the name Coelophysis mean?

3: How do you pronounce ‘Coelophysis’?

The pronunciation of Coelophysis is ‘seel-OH-fie-sis.’

4: What is the nickname of Coelophysis?

The nickname of Coelophysis is “hollow form,” referring to the animal’s hollow limbs. Coelophysis, which lived in the Late Triassic period when dinosaurs were not yet at the top of the food chain, would have used its quickness to dodge larger predators and catch its meal quickly.

5: What did Coelophysis eat?

Coelophysis and other early meat-eating dinosaurs used their speed and agility to catch insects and small reptiles. Coelophysis’ keen jaws and grabbing claws would have assisted them in grasping and killing their prey. Fish and tiny reptiles were prey for Coelophysis. The presence of Coelophysis bones in the dinosaur’s preserved gut implies it was a cannibal that preyed on its own kind.

David Baldwin, an amateur fossil collector working for Edward Drinker Cope, discovered the first dinosaur remains in the Chinle Formation in northwestern New Mexico in 1881. Cope named them C. longicollis and C. bauri, two new species of the previously described genus Coelurus (Cope, 1887a). Cope (1887b) later placed the species to Tanystrophaeus and identified a third species, T. willistoni, in a paper published later that year.

7: When was Coelophysis first discovered and by whom was it named Coelophysis?

In 1881, the first Coelophysis fossils were discovered in Upper Triassic layers at Chinle Formation sites in northeastern New Mexico. Edward Drinker Cope, a distinguished American palaeontologist, identified and described this dinosaur in 1889.

8: Where was Coelophysis found?

Edwin Colber and George Whitaker discovered a virtual graveyard in the Chama River valley in northern New Mexico in 1947. Hundreds of Coelophysis specimens, including many entire skeletons, were discovered.

Water was rare during the Triassic period due to the hot and dry climate, thus this find was most likely a big herd of Coelophysis that had gathered near a drying waterhole in an attempt to obtain water. They were most likely exposed to a flash flood before or after death, which would have buried them. The Coelophysis has become one of the most well-known dinosaurs as a result of its discovery.

9: When was the Coelophysis alive?

Coelophysis (genus Coelophysis), a genus of small carnivorous dinosaurs discovered as fossils in North America during the Late Triassic period, 225–190 million years ago, as some of the earliest dinosaurs. It is thought to be one of the first dinosaur species to have evolved.

10: What kind of climate did Coelophysis inhabit?

Given the time period in which the Coelophysis dinosaurs lived, it is reasonable to assume that their habitat was seasonally dry, desert-like, and savannah-like. Because flowering plants did not evolve until much later in the Cretaceous Period, the ecosystem may be compared to modern-day Kenya, but without the grasses. These dinosaurs lived in floodplains with different wet and dry seasons, according to a research by Therrien and Fastovsky (2001).

11: What was Coelophysis’s height and weight?

From a human perspective, the Coelophysis was almost the same size as an ostrich. It was small and had a long, slender neck, a tail, and hind legs. The jaws were filled with sharp fangs, and the cranium was long and thin.

12: How many eggs did Coelophysis lay?

Coelophysis was most likely a laying egg species. The Ghost Ranch in New Mexico, USA, discovered thousands of fossilised Coelophysis skeletons. The bones of young Coelophysis could be found in the abdomens of several of them. Rinehart et al. compared the anatomy of Coelophysis to a database of numerous reptiles and birds and found that the dinosaur lay eggs that were roughly 31–33.5 millimeters in diameter.

A single clutch of 24-26 eggs would be laid by a female Coelophysis. Evidence reveals that the dinosaur put enough effort into reproduction and even looked after the hatchlings throughout their first year.

13: What was Coelophysis known for?

14: How did Coelophysis go extinct?

Water was scarce during the Triassic period due to the hot and dry climate, thus most likely a big herd of Coelophysis that had gathered near a drying waterhole in an attempt to obtain water. They were most likely exposed to a flash flood before or after death, which would have buried them.

15: How many teeth does a Coelophysis have?

Coelophysis had teeth like those of other predatory dinosaurs: they were blade-like, curved, sharp, jagged, and had small serrations on both the front and back edges. Its teeth show that it was a carnivore, and the small lizard-like animals that were found with it suggest that it ate them.

16: How did Coelophysis walk?

Coelophysis, like all Theropods, was bipedal and moved by using its long back legs. This dinosaur’s forelimbs were longer than T- Rex’s, but they were still not long enough to facilitate quadrupedal walking.The back legs of Coelophysis were powerful and agile. It had three long toes and one short toe, and it could leap away from larger predators. Coelophysis’ front legs were small and were most likely not utilised for walking. They were most likely employed to harvest food.

Coelophysis has a huge head with a pointed nose and large eyes. Coelophysis was a master of ambush. Perhaps a fish-eater, it appears that this 100-pound predator lived beside streams, moving among ferns and horsetails, always on the lookout for predators. It also ate insects, lizard-like reptiles, and other small dinosaurs.

17: What are the Coelophysis predators?

Coelophysis was a carnivore, but because of its small size, it was not the dominant predator in its habitat. Postosuchus, Smilosuchus, and semi-aquatic Phytosaurs, according to researchers, would have preyed on Coelophysis. Both on land and in the water, these enemies ruled the Triassic landscape.

18: How fast can Coelophysis run?

Coelophysis was a fast-moving predator with hollow bones and long, slender legs. Researchers estimate a stride length of 2.5 feet based on its estimated body mass and measurements from a whole specimen. Although the feet of this smaller dinosaur were just four inches long, it is thought that this Theropod had a top speed of 25 to 30 miles per hour.

19: Why is the finding of Coelophysis significant?

For a variety of reasons, Coelophysis is a noteworthy paleontological discovery. One of the most interesting things about this species is that it helps scientists figure out how the Theropods changed over time, from the first ones to the more famous Tyrannosaurus Rex.

Coelophysis is also one of the first known carnivorous dinosaurs, making it an intriguing animal to study in general. At New Mexico’s Ghost Ranch, a Coelophysis “graveyard” was uncovered in 1947, and these well-preserved Coelophysis specimens let scientists learn more about this early dinosaur.