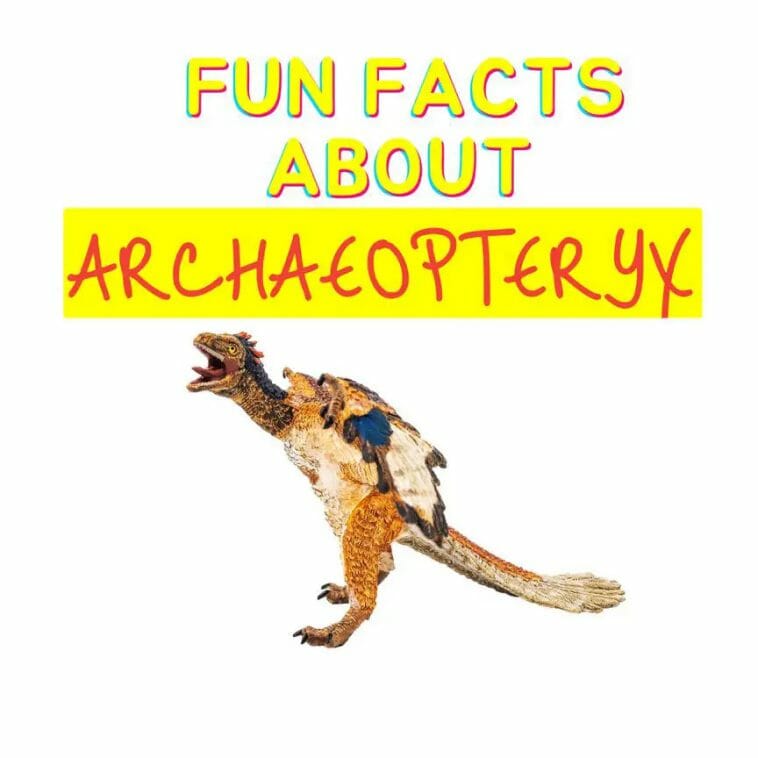 Archaeopteryx existed in what is now southern Germany roughly 150 million years ago at the end of the Jurassic period. Archaeopteryx was a tiny dinosaur that resembled a pigeon in size. It had feathers and a brain that was far ahead of most late Jurassic species in terms of visual adaptation.

Other dinosaurs with feathers have been discovered, but Archaeopteryx is the only one whose forelimbs were in the form of true wings, and whose feathers resembled those of flying birds. Therefore, scientists believe that Archaeopteryx might have flown, albeit poorly. This would place it among the first flying dinosaurs known.

Contents for Fun Facts about Archaeopteryx

Archaeopteryx was a tiny bird-like creature with broad, feathered wings. It possessed long, slender wings with circular ends and a tail that was longer than its body. It possessed the ability to fly or most likely glide due to its small size and large wings. It resembled Mesozoic dinosaurs more than current birds in terms of appearance.

The Archaeopteryx skull has been discovered in its entirety. Ten additional fossils have been discovered over time. These fossils differ from one another. Some palaeontologists, on the other hand, feel that all of the recovered specimens belong to a single species, which is still debatable. Some people still think that the first dinosaur-bird was a lot bigger than it was, about the size of pterosaurs that were only distantly related to it. In addition, this winged reptile weighed less than 2 pounds (0.9 kg). It was about the size of a bird today. The hue of the Archaeopteryx was black, or at least some of its plumage or feathers were.

3: What does the name Archaeopteryx mean?

The name Archaeopteryx comes from two ancient Greek words: archaīos, which means “ancient,” and ptéryx, which means “feather” or “wing.”

4: How do you pronounce ‘Archaeopteryx’?

The name Archaeopteryx is pronounced ‘ark-ee-OPT-er-ix.’

5: What is the nickname of Archaeopteryx?

Archaeopteryx was a dinosaur species that resembled a bird and was also known by its German name Urvogel, which translates to “original bird” or “first bird.” This creature’s name is derived from the ancient Greek words archaios, meaning “ancient,” and pteryx, meaning “feather” or “wing.”

6: What did Archaeopteryx eat?

Full teeth and claws show that Archaeopteryx was a carnivore, but diet of Archaeopteryx is unknown. It is believed, however, that they were most likely carnivores, feeding on small amphibians, reptiles, insects, and mammals, according to scientists.

A research published in 2010 suggested that Archaeopteryx was a nocturnal animal, or one that hunted at night. According to current research, nestlings took roughly three years to reach to adult size, showing a slower growth and development rate than in modern birds.

As a result, the Urvogel is thought to have had a warm-blooded metabolism and was less active than its modern counterparts. This is just another reason why the creature was likely incapable of powered flight.

All Archaeopteryx specimens discovered to date originated from the limestone strata in Solnhofen, Germany. The first fossilized feather was discovered in 1861 and described by Christian Erich Hermann von Meyer. It is often assigned to Archaeopteryx since it is the only known proto-bird species in the area.

The first skeleton, known as the London Specimen, was found in Germany in 1861. It is believed that local physician Karl Haberlein received it in exchange for his medical services. He sold it for £700 to the Natural History Museum in London, where it still exists today. Richard Owen characterised it as Archaeopteryx macrura in 1863, however he did not identify the species of the feather.

8: Where did Archaeopteryx live?

Fossil evidence suggests that the region was drastically different than it is today. Due to its claws, it was believed that Archaeopteryx was a tree climber, however the fossil record indicates that huge trees were generally missing from its habitat. Archaeopteryx may have still called the mostly low bushes its home.

Archaeopteryx fossils have been remarkably well preserved. In Germany, the Solnhofem limestone beds are renowned for their exquisitely preserved plant and fauna specimens. These specimens revealed an abundance of fossilised animal anatomical characteristics.

9: What kind of climate did Archaeopteryx inhabit?

Archaeopteryx probably lived in an arboreal environment. This animal was likely a glider, indicating an arboreal or tree-bound existence. Nonetheless, if this dinosaur were capable of powered flight, it would have hunted small animals along the shorelines of lakes and rivers, similar to many current birds.

10: What was Archaeopteryx’s height and weight?

Archaeopteryx’s flight feathers resembled the wings of modern birds in that they were asymmetrical and had large tail feathers. This is interpreted by palaeontologists as evidence that the wings and tail were utilised to produce lift for flying.

But no one knows if it could fly by gliding or flapping its wings. The fact that the breastbone doesn’t look like the breastbones of birds that can fly shows that it wasn’t a very good flyer, but the muscles that helped it fly could have been attached somewhere else on its body.

Scientists say that because its wings were bigger than its body, it would have a low stall speed and a smaller turning radius. The short, rounded shape of the wings would increase drag, but the dinosaur would be able to fly better through trees and bushes. Experts now believe Archaeopteryx could only have conducted short upward flights before gliding. It is not the first avian species, but it is a crucial predecessor to actual birds, being one of the early steps in the evolutionary process that led to them.

12: Why is the finding of Archaeopteryx significant?

The historical and biological connection between dinosaurs and birds has been known to scientists and dinosaur specialists for a long time. The Archaeopteryx fossils exemplify the significance of this finding maybe more than any other known evidence.

Despite the fact that palaeontologists have discovered additional candidates for the title of “first bird,” especially among the so-called “feathered dinosaurs” in China, Archaeopteryx specimens will forever hold the distinction of being the first dinosaurs of their kind discovered by science.