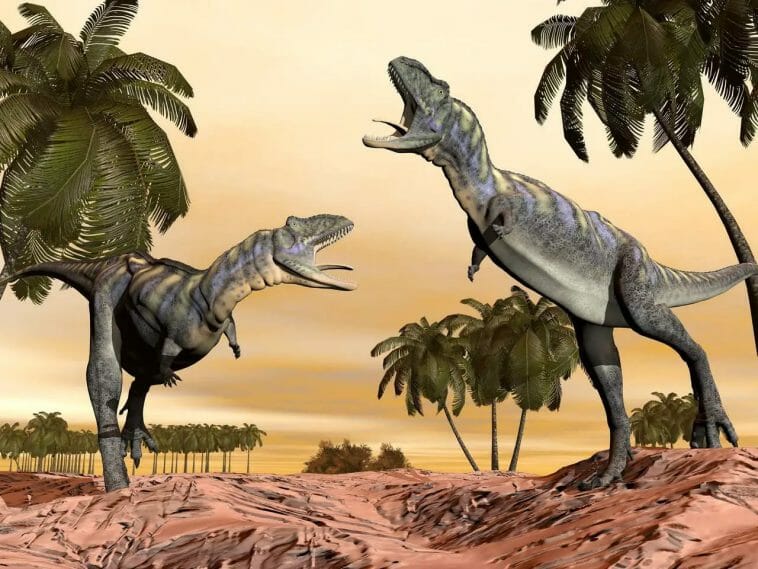 We all know dinosaurs as some giant lizards that roamed the Earth millions of years ago. You might have also loved watching Jurrasic Park and thought about what are these creatures? And how were they even living on our planet? You must already know their sizes were so big that we would look like ants to them, and some ad wings too. It is believed that dinosaurs went into extinction after the Earth was hit by a giant meteor, but that’s just a perception. Even scientists are not completely sure about the events that destroyed these giant beasts.

Today we will be exploring the world of dinosaurs and finding some of the most interesting facts about these beasts that you might have never heard before. So, let’s get started!

Contents for Interesting Facts about Dinosaurs

1: The thriving world of dinosaurs

Dinosaurs roamed the Earth for about 165 million years and then suddenly went extinct. Well, to us, this word suddenly sounds kind of out of proportion because our modern civilization started about 1000 years ago, and when you compare this to the thriving period of dinosaurs, then well, we are not the most successful vertebrate animals to rule the Earth.

I know you were shocked to find out our life periods versus the millions of years of dinosaurs, but that’s not the most shocking news. Before dinosaurs, Earth was ruled by various land reptiles such as therapsids(mammal-like reptiles), archosaurs (giant lizards), and pelycosaurs. Moving on closer to the dinosaurs period, the fearsome reptiles to rule the Earth 20 million years before dinosaurs were prehistoric crocodiles.

The word dinosaur was suggested by an English paleontologist named Richard Owen. The term dinosaurs arise from the Greek word “Deinos” and “Saurus”, where “Deinos” referred to something terrible and “Saurus” means lizard. So, the word dinosaur typically means “terrible lizard”. He suggested the name at a time when so many fossils of dinosaurs were being discovered.

6: Our birds are the evolution of dinosaurs

According to evidence found from fossils and other research, it was deduced that the birds you now see every day are the evolution of theropod dinosaurs. Theropod dinosaurs were small, feathered dinosaurs who started evolving during the late Jurassic period.

7: Most dinosaurs were plant eaters

There was a vast diversion of dinosaurs at one side there were the “apex predators” like the Tyrannosaurus rex and Giganotosaurus. But these were very few as compared to the majority of dinosaurs who were plant-eaters. This is the normal cycle of nature where “meat-lover” animals are fewer in numbers and usually hunt numerous plant-eating animals.

The longest dinosaur name is Micropachycephalosaurus. This dinosaur was found in China, and well, this name is a mouthful. This weird named dinosaur was a herbivore and existed around 84-71 million years ago.

9: Dinosaurs were not smart

There’s a popular belief that all dinosaurs were dumb and wouldn’t do anything if they lived now. To some extent, this is correct, as herbivores like Stegosaurus had small brains in comparison to their body size. Apex predators, such as the T-rex, had larger brains than their bodies and were therefore more dangerous. Even the most intelligent dinosaurs possessed the same cognitive capacity as our modern-day ostrich.

Many modern-day animals such as lizards, turtles, snakes, and crocodiles are believed to be the current heritage of ancient dinosaurs.

11: Not every animal was a dinosaur

The term dinosaur only refers to reptiles on land with a specific leg and hip structure to get classified in the two classes. So, according to this definition, some large and impressive genres of such reptiles such as flying Pterosaurs and swimming Plesiosaurs are not dinosaurs.

Many scientists believe that a giant meteor hit the Earth and became the reason for the extinction of dinosaurs. The meteor impacted the Yucatán Peninsula 65 million years ago, but it wasn’t a giant fireball that wiped all the dinosaurs in one incident. In reality, the process of extinction carried on for hundreds or thousands of years, destroying the natural environment and causing effects like lack of sunlight, and the resulting lack of vegetation. These impacts led to the destruction of each one of the dinosaurs, and in the end they all perished.

13: What is the only dinosaur that is still alive?

Birds are a living dinosaur group since they descended from the common ancestor of all dinosaurs. Birds, according to experts, developed from dinosaurs.There is no scientific proof that any dinosaurs are still alive, except for birds.

Scientists discovered the remains of Archaeopteryx, a bird-like dinosaur, in the nineteenth century. Archaeopteryx is extremely valuable to scientists. It resembled both dinosaurs and birds. It had a full set of teeth, unlike birds. It also possessed a lengthy tail and claws at the ends of its wings for gripping. It had wings and shorter fingers than dinosaurs. Many people believe Archaeopteryx was the first bird on the planet.

14: What was the biggest dinosaur?

Argentinosaurus was the largest dinosaur and terrestrial animal yet discovered. Although no full Argentinosaurus skeletons have been discovered, estimations of the dinosaur’s length (based on assumptions of the rest of the body based on existing fossils) range from 37 to 40 metres (121 to 131 ft), and it weighed 90 to 100 metric tonnes (99 to 110 tons).

15: What was the biggest dinosaur egg?

The oogenus Macroelongatoolithus, which includes fossil theropod eggs found in North America and Asia, has the largest known dinosaur eggs. They have an extended shape, and can be three times as long as they are wide, reaching up to 61 cm (2 feet) in length.

16: What was the largest carnivorous dinosaur?

17: What is the biggest flying dinosaur ever?

Quetzalcoatlus, a member of the pterosaur family of flying reptiles, was the world’s largest flying creature. This giraffe-sized reptile possessed slender limbs, a big beak, and a 40-foot wingspan (12m). Quetzalcoatlus lived in North America, with the majority of its remains discovered in Texas.

Nigersaurus was a 30-foot-long plant-eating dinosaur that lived in what is now Niger’s Sahara Desert 110 million years ago. Nigersaurus was a rebbachisaurid sauropod dinosaur that existed in the Cretaceous period between 115 and 105 million years ago. This strange, long-necked dinosaur is distinguished by its exceptionally broad, straight-edged muzzle, which is topped with over 500 interchangeable teeth, which were specially specialised for browsing vegetation near the ground.

19: What was the purpose of the Triceratops’ ball-and-socket joint at the base of its skull?

The neck of Triceratops was likely highly flexible, allowing it to consume both tree leaves and low-growing vegetation. Its strong beak, resembling that of a parrot, enabled it to pull thick jungle plants, such as palms, ferns, and cycads. Its teeth acted as scissors, tearing and snipping the plants.

20: The first dinosaurs in space

Maiasaura peeblesorum was the first dinosaur to reach space (a duck-billed dinosaur). On an 8-day NASA mission (Spacelab 2) in 1985, astronaut Loren Acton took a chunk of bone from a baby Maiasaura and a Maiasaura eggshell into space. Montana’s official state dinosaur is Maiasaura since 1985.