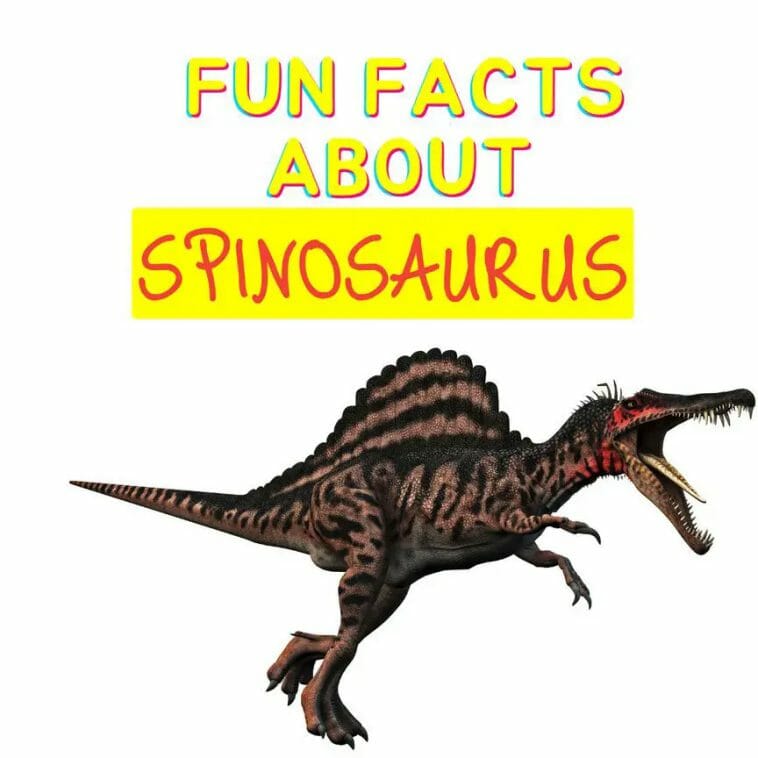 Spinosaurus is one of the largest meat-eating dinosaurs yet unearthed, if not the largest. Its distinguishing features include being the largest meat-eating dinosaur, rivalling even Tyrannosaurus rex in size. Spinosaurus was a large semi-aquatic dinosaur that lived 110 to 94 million years ago during the Cretaceous period. With a massive sail on its back and long, crocodile-like teeth, it’s also one of the most recognisable dinosaurs.

Hence, take a look below to learn all of the interesting information about this amazing dinosaur.

Contents for Fun Facts about Spinosaurus

Spinosaurus had a crocodile-like long, narrow head with nostrils near the eyes rather than near the end of the snout. It had straight, conical teeth rather than the curved, bladelike teeth found in other theropods. The huge bony fin on the Spinosaurus’ back was its most recognisable characteristic. This is also referred to as a sail, and it can reach a height of 7 feet. The spine of a Spinosaurus was made up of the bones of its sail. When the Spinosaurus curved its back, the sail was raised. Spinosaurus had unusually robust front arms with firm hands, most likely to sustain its weight when walking on all four legs.

3: What does the name Spinosaurus mean?

The meaning of the word Spinosaurus is “Egyptian spine lizard.” “Spino” is a conjugation of the Latin word spina, which means “spine,” and “saurus” is a mixture of the Greek and Latin roots of the word sauros, which means “lizard.”

4: How do you pronounce ‘Spinosaurus’?

Spinosaurus is pronounced as “SPINE-oh-SORE-us.”

5: What is the nickname of Spinosaurus?

Spinosaurus, also known as the “spined lizard” or “thorn lizard,” was named after its “sail back” appearance, which was created by long vertebral spines. It was named in 1915 by German palaeontologist Ernst Stromer after his colleague Richard Markgraf discovered a fragmentary skeleton at Bahariya Oasis in western Egypt.

6: What did Spinosaurus eat?

Spinosaurus is assumed to have survived mostly on fish from the dinosaur’s river system, such as enormous coelacanths, sawfish, large lungfish, and sharks. Meat and fish were the most common foods for Spinosauri. This suggests it was both a fish-eating and meat-eating dinosaur. The Spinosaurus, like the Tyrannosaurus Rex, would forage for food on land and consume the remains of other extinct dinosaurs.

There have been very few Spinosaurus fossils discovered, and none have been found in their entirety. Richard Markgraf discovered the first Spinosaurus fragmentary skeleton in western Egypt’s Bahariya Formation in 1912.

The first specimen was a skeletal fragment discovered in 1912 and identified by German palaeontologist Ernst Stromer in 1915. Unfortunately, this specimen was destroyed during World War II, but descriptive information remains. Much of the scarce knowledge about this dinosaur has been preserved thanks to Stromer’s diligent notes, which include precise descriptions and sketches.

8: When was the Spinosaurus first discovered?

A partial specimen was discovered in Egypt’s Baharia Oasis by Richard Markgraf in 1912. He brought the fossils to Ernst Stromer in Germany, who named the dinosaur Spinosaurus in 1915.

9: Where did Spinosaurus live?

The Spinosaurus existed in North Africa, in areas that are today part of countries including Egypt, Morocco, and Niger. Other Spinosaurid dinosaurs have been found in places like Brazil, Asia, Europe, and Australia.

10: When was the Spinosaurus alive?

11: What kind of climate did Spinosaurus inhabit?

Spinosaurus inhabited a wet environment that consisted of tidal flats and mangrove forests with numerous other dinosaurs, including fish, crocodylomorphs, lizards, turtles, pterosaurs, and plesiosaurs.

12: What was Spinosaurus’s height and weight?

13: Why did Spinosaurus have a sail?

Spinosaurus possessed a huge sail made up of long spines and skin. The sail could reach seven feet in height on average, and it would rise up when Spinosaurus arched its back. Spinosaurus’ sail was most likely intended to entice the opposite sex, terrify rival males, and regulate its body temperature, according to most palaeontologists.

14: What was Spinosaurus known for?

The Spinosaurus was possibly the largest carnivorous (meat-eating) dinosaur ever. It was larger than the Tyrannosaurus Rex and Giganotosaurus. According to studies, it measured roughly 15 metres (49 feet) in length and weighed between 12 and 19 tonnes. The Spinosaurus had long, slender spines that reached over 1.5 metres (5 feet) in length.

15: How did Spinosaurus walk?

Professor Nizar Ibrahim claims that Spinosaurus was unlike any other dinosaur, with significantly smaller hind legs than previously thought. This means it was most likely quadrupedal, meaning it walked on four legs the most of the time.

16: How fast can Spinosaurus run?

The Spinosaurus could reach speeds of up to 15 miles per hour, according to some estimates.

17: How many teeth does a Spinosaurus have?

Spinosaurus had a tiny crest over its eyes, as well as a long and narrow snout at the end of its head. It featured six or seven needlelike teeth on either side of the upper jaw’s very front, as well as additional 12 teeth behind them. A few big, slanted teeth interlaced near the snout’s end. While its jaw was strong, none of its teeth were serrated, making it doubtful that it could have ripped difficult prey with them. This supports the hypothesis that it ate largely fish and corpses to live.

18: Why is the finding of Spinosaurus significant?

The extraordinary rediscovery of this fascinating dinosaur has provided enough evidence for scientists to conclude that Spinosaurus was semiaquatic at the very least. Spinosaurus has previously been recognised as a fish-eating dinosaur with amphibious characteristics, as evidenced by its short hindlimbs, large feet, thick bones, and elongated jaws studded with conical teeth.

This discovery disproves the hypothesis that non-avian dinosaurs never invaded the aquatic world. Spinosaurus was actively chasing prey in the water column, as opposed to simply waiting for fish to swim by in shallow water. It most likely spent the majority of its existence in the water.