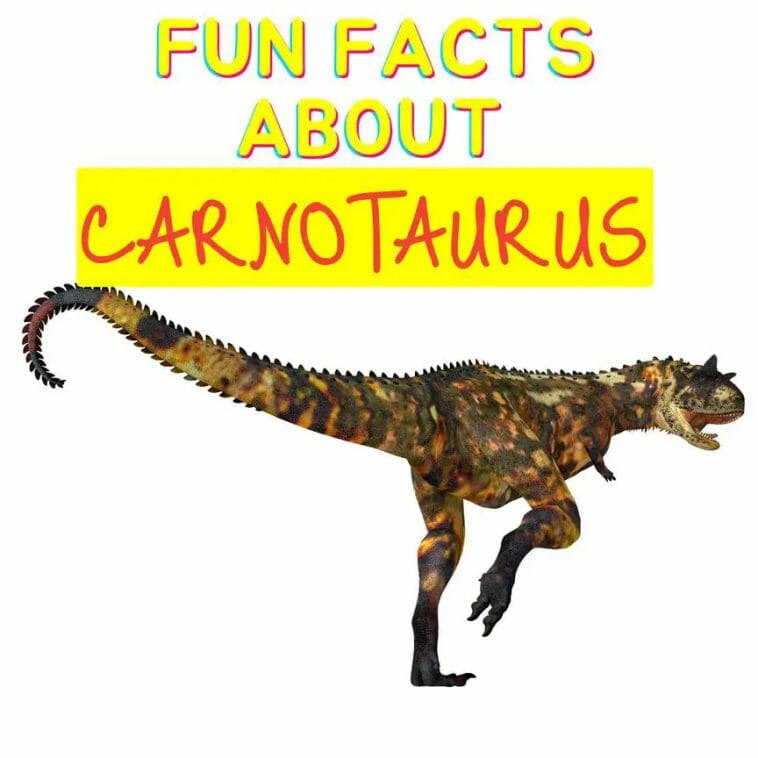 Carnotaurus was a carnivore with a distinctive appearance. It is one of the southern hemisphere’s best-studied theropods. The skeleton is highly preserved and articulated (connected together), with only the tail, lower legs, and hind paws destroyed by weathering.

Carnotaurus has some distinguishing characteristics that set it apart from other giant theropods. One such feature was its exceedingly short arms, which ended in fused fingers and could hardly be moved separately. The typical claws were also absent at the tips of the fingers. The Carnotaurus’ body was covered with elevated, cup-shaped scales, according to several well-preserved fossil skin castings on the right side of the body. It has two little, pointed horns on its cranium and exceedingly short front legs.

Carnotaurus’ hand, unlike that of most theropods, had four fingers. It had a small head, a huge rib cage, and a short tail. It had a fairly tiny lower jaw compared to other theropods. The Carnotaurus’ eyes were pointed forward, indicating that it had binocular vision and consequently spatial depth perception.

The type species, Carnotaurus sastrei, is the only one known. Rajasaurus from India, Aucasaurus from Argentina, and Majungasaurus from Madagascar are its closest relatives.

Contents for Fun Facts about Carnotaurus

2: How do you pronounce ‘Carnotaurus’?

The name Carnotaurus  should be pronounced “Caar-noe-tau-rus.”

3: What does the name Carnotaurus mean?

The name Carnotaurus is composed of two separate words. The prefix “carno” comes from the Latin word “carnis,” which meaning “meat.” The Latin word for “bull” is “taurus.” The horns on this reptile’s frontal bone give it the appearance of a bull. Due to its voracious nature, its name loosely translates to “meat-eating bull.”

It resembled a huge, vicious stag or deer with long, slender neck, twisted tail that ended in sharp claws for defence against approaching predators, and fierce-looking horns on its head between two eyes. The feathers of the Carnotaurus are believed to be attached around the feet, under the skull, and at the skeleton’s extremities.