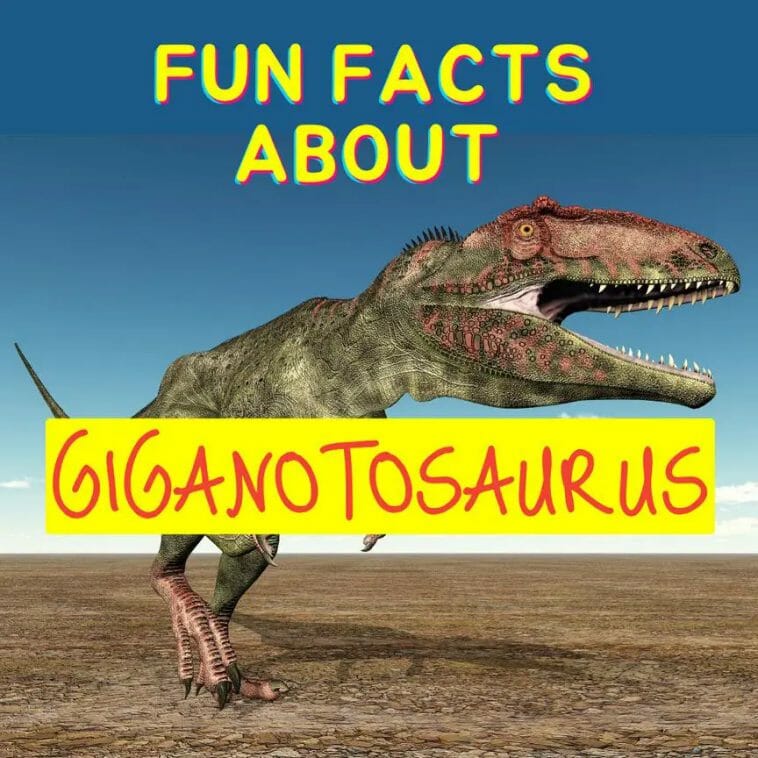 Amateur palaeontologist Rubén Dario Carolini discovered the first Giganotosaurus skeleton in July 1993 in Villa El Chocón in the province of Neuquen in Patagonia, southwestern Argentina. The fossil was later discovered and studied scientifically by palaeontologists Rodolfo Coria and Leonardo Salgado in 1995.

Giganotosaurus lived roughly 99.6 to 97 million years ago and was one of the largest carnivorous dinosaurs, alongside Tyrannosaurus and Carcharodontosaurus. The skeleton is around three-quarters complete, consisting of the head, pelvis, limb bones, and the majority of the vertebrae. The head of a Giganotosaurus was about 1.5 metres long. Giganotosaurus had three-fingered hands and an acute sense of smell, among other things, based on its skull architecture.

Contents for Fun Facts about Giganotosaurus

2: How do you pronounce ‘Giganotosaurus’?

The name Giganotosaurus should be pronounced “Gee-gah-no-toe-sore-us.”

3: What does the name Giganotosaurus mean?

In 1995, the dinosaur was given the name Giganotosaurus carolinii. The genus name translates to “giant southern lizard,” while the specific name honours the dinosaur’s discoverer, Rubén D. Carolini.

The body length of a Giganotosaurus was around 40-43 feet (12-13 metres) long and weighed 14 tonnes (14000 kg). This makes them even more massive than the Tyrannosaurus rex. They had huge, powerful legs that benefited them in locomotion, particularly when hunting.

In comparison to those of Tyrannosaurus rex, their teeth were significantly smaller. Some believe their teeth were eight inches (20 centimetres) long. The serrated teeth aided in the process of slicing the flesh of their prey. In spite of its exceptional qualities, archaeological evidence reveals that this dinosaur’s brain was quite small. The discovery of the skull suggests the individual had a narrow cranium.