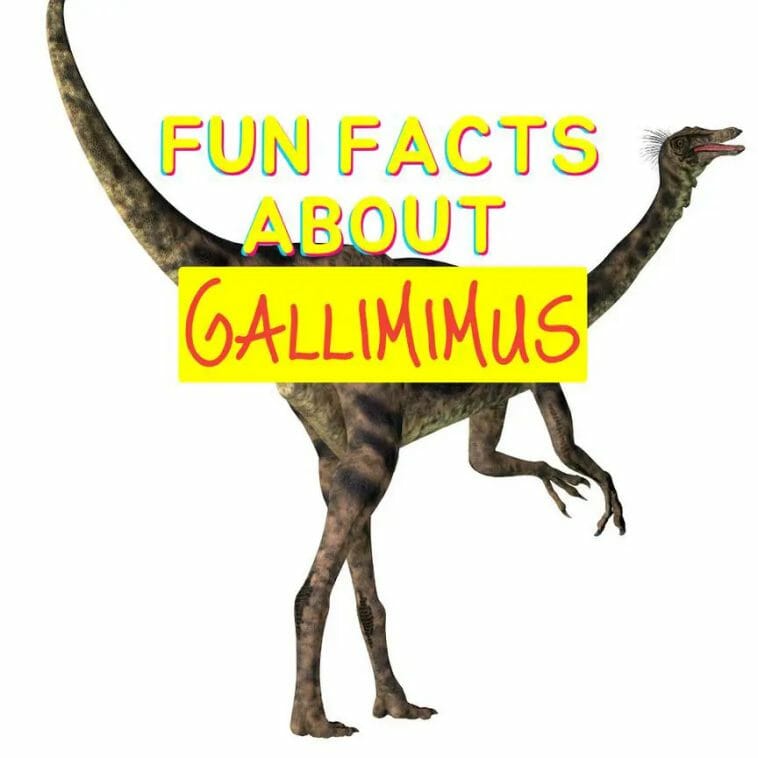 Gallimimus, with its small head, huge eyes, and long neck, resembled a living ostrich. It had short arms, large legs, and a long tail, unlike today’s ostrich. The holotype, IGM 100/11, is a partial skeleton that includes the skull and lower jaw. A larger skeleton, many other partial skeletons, especially from juveniles, and countless individual bones were also described.

Gallimimus was distinguished by its unusually short hand in respect to the length of the humerus and in comparison to other ornithomimids. Because the eyes were on the sides of the skull, they didn’t have binocular vision. Gallimimus, like most modern birds, had hollow bones that helped it to be lighter. Gallimimus was a fast-moving dinosaur that was one of the largest of its species.

Gallimimus, unlike carnivores, lacked teeth. It is also possible that, like Ornithomimus, it was one of the fastest dinosaurs, capable of reaching speeds of up to 80 km/h for a brief period of time. Gallimimus most likely had an omnivorous diet, which meant that it ate insects, small vertebrates, eggs, and plants.

Contents for Fun Facts about Gallimimus

2: How do you pronounce ‘Gallimimus’?

The name Gallimimus should be pronounced ” gal-lee-MEEM-us.”

3: What does the name Gallimimus mean?

The dinosaur Gallimimus was called “chicken mimic ” because its neck vertebrae were similar to those of the Galliformes. The specific name comes from bulla, which was a gold capsule worn by young Romans, and refers to a bulbous structure at the base of Gallimimus’s skull.

The feathers of Gallimimus were delicate and fluffy. These dinosaurs possessed beaks and eyes that resembled giant birds. They possessed a highly delicate jaw and a longer nose. It is unclear how they were able to swallow stones and dirt with such a sensitive jaw.

Additionally, according to many studies, their jaw was paper-thin. Their head and long neck made it easier for them to spot small terrestrial animals for prey. This dinosaur had a large tail and weaker forelimbs. Their razor-sharp beak compensated for their weak jaw. They were referred to as seeming odd because of their short arms and chicken-like movements.